On the move again, heading further South down the lake to Kande Beach. This time though, a lie in (leaving 7.30am!).

We stopped of at Mzuzu – I was going to write ‘a small market town’, but turns out its the largest town in Northern Malawi. There is only one reason overlanders stop here. Fancy dress shopping. There is actually a fairly good recycling system going on here. Those clothes that you kindly donate to the local Oxfam shops in England that can’t be sold to English people, are brought over to Africa. Any clothes left over, that no self respecting African would be seen dead in, are then bought by overlanders as fancy dress! Think leopard print, 80’s puff sleeves and just awful! The guys knew instantly what we wanted and gathered around the truck with their bags full of said clothes! Tomorrow evening we are having a fancy dress party – we pulled names out of hats and have to dress the other person for whatever can be bought for $5. 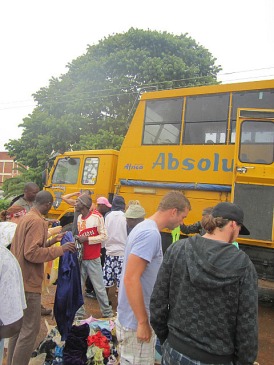 We also stopped at the supermarket in Mzuzu, not a huge selection – a lot of alcohol, sugar, overpriced tea and crisps and not a lot else! So not a particularly successful lunch-for-the-next-three-days shopping trip. After a curry lunch at a cafe, back on the road again!

Our next stop was much more exciting – a wood carving market! Everything you could want in a wood form! Bowls, cutlery, globes, chairs, tables, animals of every shape, jewellery….

The local speciality is a Malawi chair. This is 2 pieces of wood, one upright (acting as the chair back) and one stuck through the first (acting as the seat and a second point on the ground). The former piece being intricately carved – animals, people, trees, an African map etc. Some were huge, others much smaller. I bought a small one for $20, not sure how I’m getting that one home. 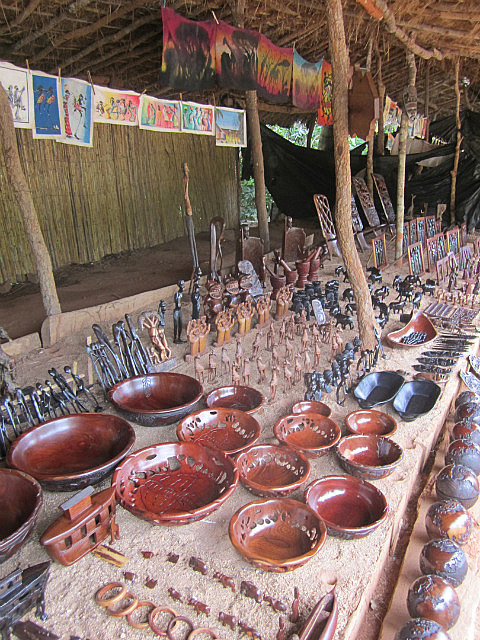 I also finally bought myself a big giraffe, have been holding off since arriving in Kenya! There were some huge ones, which would have been great! But given all the other things I bought at the market, had to settle on a medium sized one!

Next stop – Kande beach! We’re staying here for 3 nights, so the last tent putting up and down for a few days. We rolled into the campsite at 4.30pm and settled down into the beachside bar!

All the locals hang out just outside the bar, on the beach. We played a few games of Boe with them – a flat wooden board with 4 rows of indents, 2 marbles in each indent and you move marbles around in your side to try and win marbles from your opponents side. I won my first game – either beginners luck, or he let me win! The guys have all given themselves names (probably just to entertain the tourists!) but we met Donald Duck, Cheese on toast and Slim shady amongst others! 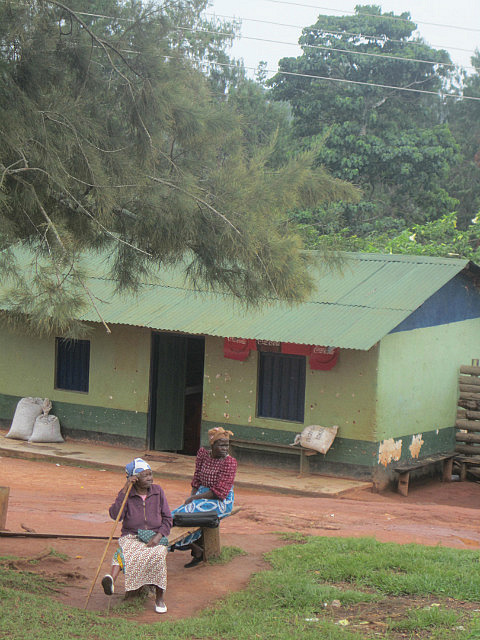 Being a freshwater lake and being in Africa, Lake Malawi is not short on possible diseases. One being Bilharzia (Schistosomiasis). This is caused by a parasitic worm that lives in freshwater snails – and doing a half-Biology degree, one that I have learnt an awful lot about! It is possible to catch the disease just through contact with the infected water.

The lake is famous for its Cichlids – all 500-odd species of them. (a type of fish) I needed no further excuse to dust off my fins and get back in the water for some more diving! But what about the bilharzia? Apparently taking a tablet in a few weeks time will sort that out….!

The dive centre here is eerily quiet, they don’t get a lot of people! So I was out on my own with a guide for the dive! The freshwater lake is 420m above sea level and the water is 28 degrees, apart from that it was much like diving in England! No visibility, lots of silt/sand, a sunken car and lots of rocks. The fish were cool though – lots of different colours, some small, some huge. Good to do something a bit different. The locals do a lot of fishing around Kande island (the small rocky island) and leave their old fishing lines in the water. As a result, several things get caught in the line – including a blue crab which was still alive so we cut it out and it scurried off into a hole. 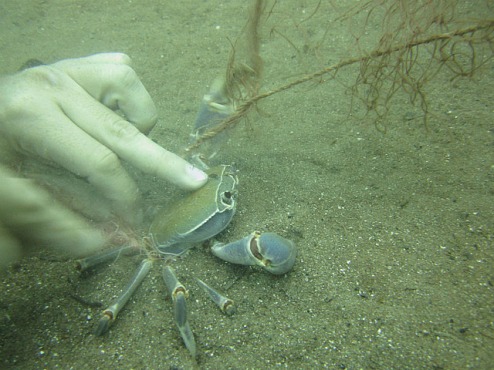 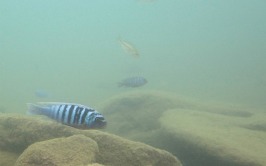 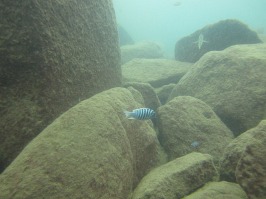 In the afternoon we went for a walk around the local village. There are loads and loads of children everywhere, they followed us around for the whole 5 mile walk! Wanting to play with us. After 20 times of being asked the same questions in the same order (what’s your name, where are you from, where are you going, how old are you) you get a bit tired – fun all the same!! They are all super friendly and very proud to be from Malawi.

We visited the hospital – very small but they have 4 doctors. It was fairly quiet when we were there, but one woman had given birth 4 hours earlier and let us see her baby! Next stop the primary school. We were treated like celebrities, invited into the classroom and went round to speak to the children (they know an awful lot for 11 year olds!) and they read to us! Some of them gave us their addresses and asked us to write to them – they all wanted their photos taken and asked for those to be sent to them! 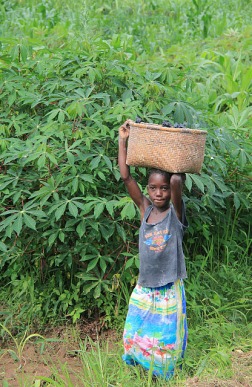 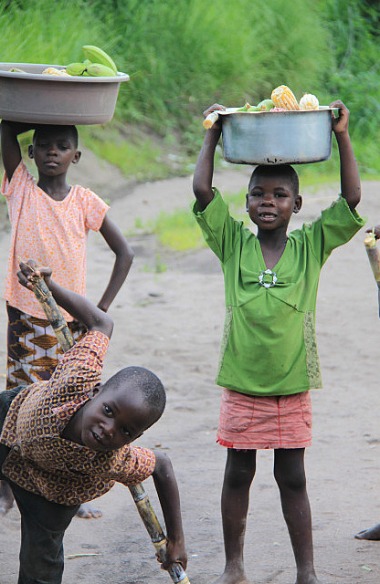 In the morning, some of the boys had gone to the village to help kill a pig. The pig had been roasting on a spit all day long 😦 It was my turn as cook group today, so rest of the evening was spent making salads (pasta, rice, vegetable) for dinner. It’s really surprising the quality and variety of food that can be made over a coal fire at the side of a truck – every day has been different and really good!

Then it was time for dressing up (in yesterday’s pre-bought outfits), dinner and punch! The outfits were hilarious.

The alcohol had been bought at the supermarket the previous day, along with pineapple and passion fruit juice and tins of fruit. Or so we thought! Instead, the juice turned out to be cordial and the tins were jam!! The campsite bar had no lemonade,so instead sold us some water from a local 40m deep well (let’s hope no one is ill!), so we melted some jam in hot water and threw that in too!! Ended up being pretty good!!

A lazy day today, it’s a hard life doing nothing.

I spent the day catching up on my written diary, something that has been neglected for a long while. Had some lunch, sat around a bit more. In the afternoon the sun came out briefly – turning the lake into pretty shades of blue.

In the evening we headed back to the village and had a local meal inside one of the family’s house. The house was made of mud bricks and a corrugated iron roof, it had 2 rooms – a lounge and a bedroom. The kitchen is always in a separate building (due to the smokey fumes from the fire). We sat on wooden mats on the floor and were served sweet potato soup, rice, cooked pumpkin leaves and kidney beans. Was all pretty good.

Afterwards some of the children performed for us – songs in Tonga (their local language) and some dancing! They pulled us up a couple at a time to join in! They were much better dancers than us! And some had obviously been watching too many western music videos, their dancing was rather provocative for 10 year olds!!!

The evenings entertainment had to finish early – there was a storm coming. The thunder and lightening was approaching, we had just made it back to the campsite when it started to pour with rain. I ran between tent and bathroom, I may has well have just stood fully clothed under the shower!