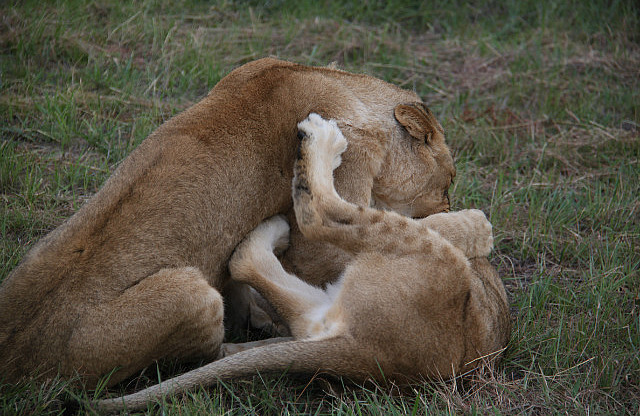 Sadly its time to leave Lake Kariba behind and head further into Zimbabwe. Today we have another long driving day, 500km to Gweru, where we are staying at Antelope Park. So inevitably another 4.45am morning.

Although called Antelope Park, the name is a bit misleading. Here, it’s all about the
Iions. They have a breeding programme where they hope to release the lions back into the wild in four stages. But given they have been going 20 years and the furthest they have got is stage 2 (stage 1 they walk cubs and feed them along with tourists, stage 2 they move a male and a few females out to a controlled 500 hectare environment where they have to fend for themselves and hopefully produce cubs that have no human contact. Stage 3 is where the new non-human contact cubs are moved to create their own prides and stage 4 being full release and reintroduction into the wild), its a very slow process, so I guess a main purpose now really is just tourism.

Enroute we stopped off in Chinhoyi for some shopping at yet another supermarket to stock up on food for the next couple of days. The variety of fruit and vegetables available is becoming limited and expensive.

We rolled into Antelope Park at 4.30pm. We were greeted by a song and dance and some drinks from the staff – pretty cool! Then given a tour of the campsite, never had this before! The place is the nicest we have stayed and pretty fancy!! I’m feeling a bit dirty and under dressed!

We were then taken to a room with a PowerPoint presentation (!) about all the activities it is possible to do here. Activities include going for game drives, ride elephants, riding horses, holding snakes, canoeing, watching lions being fed, usually playing with cubs – but sadly don’t have any really small ones at the moment and the main attraction – walking with lions. Literally being – walking with lions.

There are a couple of walking options – with females, aged 9 months through to 15 months old. They stop walking them after 18 months old as they become too large to control. You can stroke them (although not their heads) and pose for photos with them. Ok, so these are wild animals but almost treated as pets. 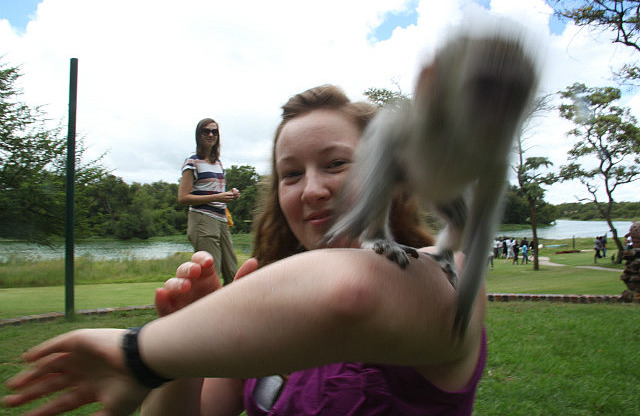 So now we are all signed up for various (expensive, but cool sounding) activities!

I am cooking again tonight – seems like I’m always cooking!! By the time we had our tents up, it was at least 6.30pm and dark. So onto chopping vegetables. It takes quite a while to cook for 21 people. Although I think we surpassed our previous dinner (that we made 4 days ago!) and made a great feast!

Good morning at Antelope Park and the start of lion activities!

I wasn’t starting my lion activities until 4.30pm. So spent the day wasting time:
– having a lie in until a very late 8.30am;
– using very slow (and expensive!) internet;
– going for a walk around the campsite and playing on the swings! How old am I?
– playing with the baby orphan monkey – so cute!!!!
– arranging laundry – everything I own is a shade of dirt;
– being jealous of everyone doing activities all the rest of the day;
– lazing about. 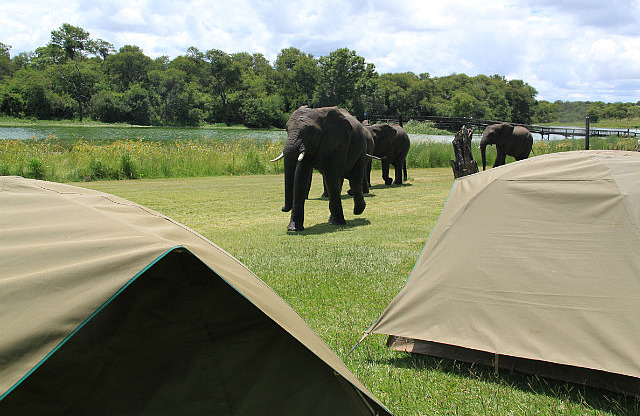 I was so excited!

We had a brief talk about what not to do – don’t touch their head, don’t run, don’t crouch, don’t put anything on the floor, don’t panic, don’t approach from the front, don’t wear anything dangling…umm so what can we do? Just walk!

We were given sticks just in case they did decide to play (attack).

The lions are categorised into letters – my two were ‘L’s – called Laili and Lewa. We had a guide and two lion handlers with us (we were a group of 8 from the truck) and reassured that these two lions were not going to hurt us! One was 12 months old, the other 14 months. They were pretty large! The guide explained the story of each of them.

They are kept in an enclosure most of the day (it’s all natural habitat and pretty large) but for the walk, it’s all out in the open. The cubs are taken away from their mother when then are less than 10 days old – and whilst they are still blind. Therefore, while they are raised, humans are the dominant creature in their lives – they believe that humans are part of their pride and should be followed. 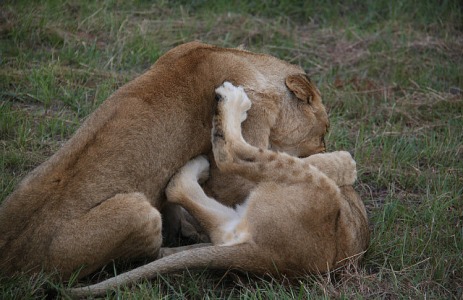 So once the lions were let out of their enclosure, we had to walk in front of them. If we stopped (ie taking a million photos) they stopped too. They were so beautiful. We could stroke them, pose for photos with them, hold their tails and walk along side them. Every now and then they stopped for a roll around and a play with each other. One decided to climb up a tree-cute!

Our 90 minutes was quickly over, it was so much fun! It’s easy to forget they are wild animals! 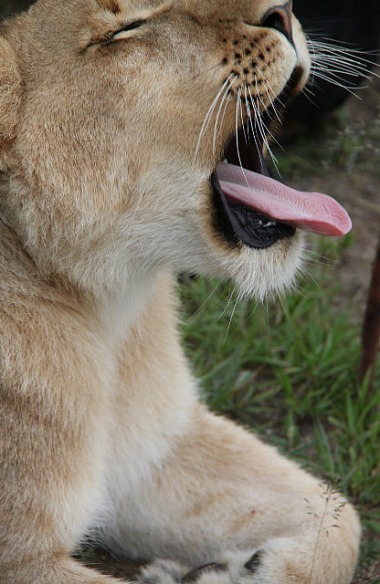 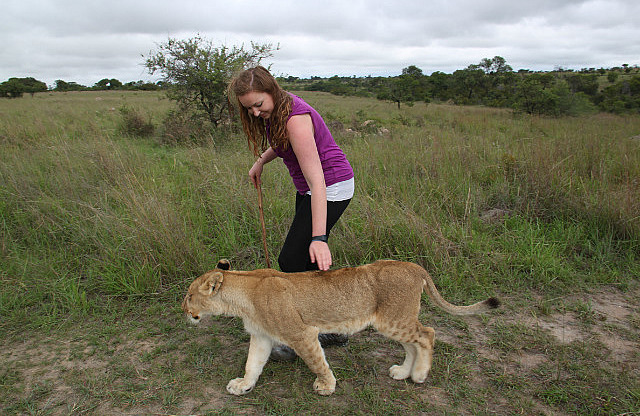 We all went to the campsite restaurant for dinner (nice change from truck cooking). The food was amazing! Loads of different vegetables and salads. Then sat around the camp fire!

Another fairly lazy morning, up for an 8.30am breakfast.

My first lion activity was feeding at 12pm. The lions are fed every 3 days, which roughly mimics their eating patterns in the wild. But what they do here, is leave large chunks of cow in a separated part of their large enclosure and let the lions run to it. We were sat next to the bits of cow on the other side of a flimsy looking wire fence. I certainly hoped the fence was sturdy!

We watched for 2 sets of feeding. They released the 5 male lions, they came charging up to the meat, centimeters away from us. Even though we’re separated by a fence, it’s pretty scary!

Then it was time for the second set of males, these ones were bigger and even more powerful. Within a few seconds they were charging up to the fence where we were stood – I didn’t think they were going to stop!! They were running so fast they skidded into the meat and bits went flying up at us – gross! We watched them gorge on the meat for a while, they can’t really chew, they sort of suck at it.

We arrived back to camp and started to organise some lunch, just as 4 huge elephants sauntered right past our tents! We are camping right on the edge of a river, the elephants came along to chew on the reeds and have a paddle. Just another day in Africa!!

At 6.15pm we gathered for the ‘night encounter’. Here, they release a male and several females into the open parkland and hope something exciting happens! There are herds of zebra and impala scattered around the park, basically the lion prey! We were following behind the lions in open jeeps.

The statistics for seeing a lion kill on a trip to Africa is 10 in a million. The chances of seeing a lion kill here at Antelope Park is 1 in 3. We were certainly hoping we were going to be in that ‘1’ tonight! We were told to expect to be out following the lions for anything between 20 minutes to 4 hours, depending how long it took them to hunt.

As we started our drive, we had views across the park land with a pink and purple sky as the sun set behind the trees. On the road right up ahead were 2 giraffes having a battle. They fight with their necks – and is fittingly know as necking – they wrap around each other and bash each other. Quite funny! 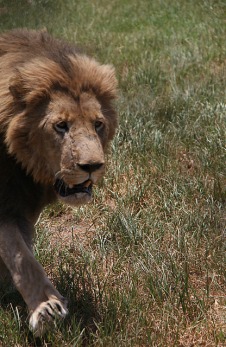 Onto the lions. We drove up to the enclosure area, the lions we took out were 24 months old – 3 females and 1 male. They very obediently followed behind the car initially, but as we drove further into the park they went off to explore a bit more. We had 2 lion trainers in the car with us, all they had to do is call and whistle a bit and the lions returned!

We drove around for several hours, not a lot of game about. We had a spotter on the car, using a red spotlight to highlight animals for us (lions are reported not to be able to see red light, so this does not interfere with their hunting) and we were not using the car headlights. A couple of times, we found groups of a couple of impala. The lions would all go in different directions, crouching in the long grass, creeping up towards the impala, then would start to chase. That became pretty exciting – both the lions and the impala could run pretty quickly!!! We had difficulty keeping up with their speed. Unfortunately (or fortunately, did I really want to see it kill a cute impala?) the lions did not make a kill and we had to return the lions to their enclosures.

Once back at the enclosures, the lions were not playing game anymore! They were more interested in having a battle with some of the other lions! One of the trainers got out of the car and ran after them – we all thought he was mad!! But somehow they were obedient and padded off into their enclosure!