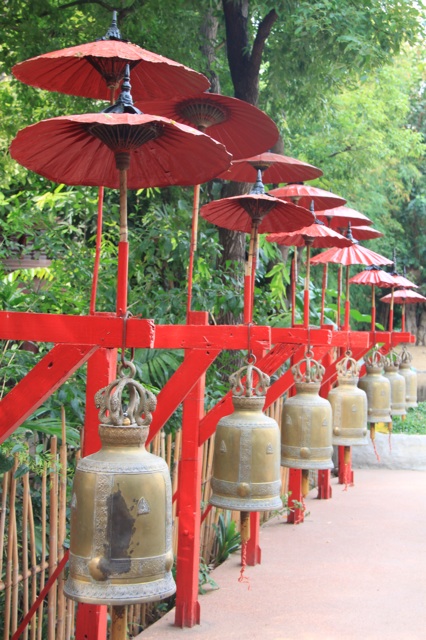 Up bright and early for my next flight – up to Chiang Mai.

At the time of booking, I thought a 6.30am flight sounded ok.

Even at 5am, the airport is packed full of people!

After just over an hour of flying, we landed early and by 8.15am I had arrived at my guesthouse.

I caught a Sorng-taa-ou (a red shared taxi) from the airport. The driver didn’t know where the guesthouse was (despite the fact I told him the address and pointed on a map), so he tried to drop me off on a random street.

After dropping my bags at the guesthouse, to business.

I need a Chinese tourist visa.

Here in Chiang Mai there is a Chinese consulate that I’m going to try my luck at.

Chinese visas are now notoriously difficult to obtain outside your country of residence. Seemingly very month a new rule is added and more documentation and proof of ‘holidaying’ is required. I was just hoping that I had got enough of this required information with me!!

I was the first one there, so waited around until 9am when they opened. Another guy in line was telling me how easy it is in fact to get a visa here (ironically, he was turned away for not having enough paperwork). I had already filled out a 6 page form. Gave them a photo. Then they requested more information – I had to show flights in and out of China, a hotel booking for every night I am staying in China and a day-by-day itinerary. Luckily I had all of that – accepted!

Pick it up tomorrow. Easy.

I hadn’t thought the process would be so quick, by 9.15am I was out of the consulate and now without a plan for the day!!

So I decided just to wander around.

The centre of the city is encircled by a moat, there are various brick gates at regular intervals along the moat, allowing you to pass in and out. But it doesn’t look particularly exciting.

Chiang Mai is not short on temples – there are over 300 here, so might as well visit a few! My first stop was Wat Phra Singh. It was all very pretty – a big gold reclining Buddha, a cat walking around all the walls, pretty ornate dragons guarding every entrance and a big white stupa at the back. The next few temples I visited followed the same blueprint. Variations being in the colour of stupa and numbers of elephants adorning the stone work.

Every temple is surrounded by beds of flowers of every colour and topiary trees, cut into balls. All really ornate and pretty.

Wat Phan Tao was different to all the rest – this one was made of teak with golden edges. Inside the temple were lots of streamers cascading down from the ceiling.

Wat Chiang Man is believed to be the oldest in the city. I liked this one – there was a stupa covered in elephants!

The temples are dotted all around the city, each street seems to have another temple along it! The roads are small and form a grid like pattern inside the moat. Small shrines and offerings are scattered around the pavements and the smell of sweet incense hangs in the air. It’s actually very similar to Ubud, in Bali.

I almost made a big temple error in missing out one of the larger ones! I thought I had already visited it, when in fact I had only visited the temple next door, so I backtracked a little bit!

Wat Chedi Luang was particularly spectacular – a large stone mound. Dating from 1441, this temple is believed to have been the tallest in ancient Chiang Mai. There were nice stone elephants along the edge too! By 3pm I was exhausted!

Busy day – have been around 15 temples and walked around much of the old city.

So time for some rest. My budget can no longer stretch to staying in nice private rooms every night. So here I am, back to staying in a dorm. And while being a very nice brand new room, this one is a little odd – no bunks, but lots of mattresses all lined up together on a shelf!

Later on in the evening, a thunderstorm hit – resulting in a power cut for the rest of the evening!

Back to the Chinese consulate this morning to pick up my passport. Again, it was very quiet and I was the first there. After paying 1,900 baht (£40), I had my passport returned complete with a new sticker.

I didn’t have much of a plan for the morning, so ended up wandering around some of the small maze-like streets around the moats.

Today with the sun shining, the moats looked a lot more beautiful – the colourful flowers reflected in the water and rainbows scattered amongst the fountains.

I bumped into a large morning market selling pretty much everything from flowers to shoes, to batteries. But mostly what was on offer was a whole array of freshly cooked foods – a lot of fried pig fat (!) but also curries of every colour, fish of all shapes and sizes and drinks complete with jellied balls and cubes!

Chiang Mai is renowned for its Thai massage.

Thai massage is different to a conventional massage – no oil is used, and it includes a lot of stretching and being moved into different stretching positions! I’ve never had a proper massage before – I’m a bit scared. But when in Rome!

As with everything here, there are so many massage places to choose from. I found one that looked rather pretty – with little fountains and elephant decorations and decided to go for it!

I had to change into some loose clothing that they provided – fishermans pants and a huge tunic top! Then was shown to my little room – which had a thin mattress on the floor, decorated with pretty cushions. There was the standard twinkling music playing and the smell of scented oils in the air.

A typical massage is an hour long, I was thinking that was a rather long time but it actually flew by! After initially finding it all rather funny, I got into it and ended up enjoying it! I didn’t realise I was so stretchy!

After my relaxation, I bought some fruit from the market for lunch and continued the relaxing doing nothing all afternoon!

And there’s no better place to try a cooking class! There are absolutely loads of possible cooking schools all seemingly offering a similar package. So I picked one at random to attend an evening class, making 5 different dishes. I made sure I didn’t eat too much lunch, leaving lots of space!

We were shown all the traditional cooking ingredients (coriander, ginseng, ginger, peppercorns, coconut cream, palm sugar etc etc) and had some time to wander around finding all the unusual foods – fried pig fat, weird cucumbers, nuts of every size and shape (and tasting all the dried, sugared fruit! kiwi was my favourite).

Then down to business.

The cooking school is located outside of the main city in a Thai house where we were each allocated a cooking station with our own gas hob and chopping board! There was a menu to choose your 5 dishes from, I chose to make: – Tom yam kung (a ‘hot and creamy’ soup. ie. a normal Tom yam with coconut milk added!) – Pad Thai – Red curry paste – Red curry with pineapple – Chicken and cashew nut stir fry I was excited, I haven’t done any cooking for over 4 months – when I was last at home!

Our teacher (called Mink) explained all the ingredients and showed us how to make each dish as we copied along. Surprisingly all types of soup and all curries etc are all made from the same basic ingredients, just with a couple of variations which leaves them tasting totally different. We made the soup and the pad thai first, then hungry, sat down to enjoy! The last time I had pad thai (two years ago) I really didn’t like it. Everyone else seems to rave about it and its one of the staple dishes of Thailand, so I was giving it another go.

But no, still not a fan.

After eating around half of my food, I was full! But we still had another 2 dishes to cook! So back to work, making the curry paste. A lot of pestle and mortar work!! All curries are made from the same ingredients (shallots, garlic, lemon grass, turmeric, chilli paste and thai ginger). That would make a red curry. Then to make other curries you add extra ingredients to the basic mix, for example a Penang curry adds peanuts. A yellow curry adds curry powder and a green curry adds basil and green chillies. It was really fun. But by the time it came to eating again, I couldn’t possibly fit any more in – so mine was wrapped up to take home! 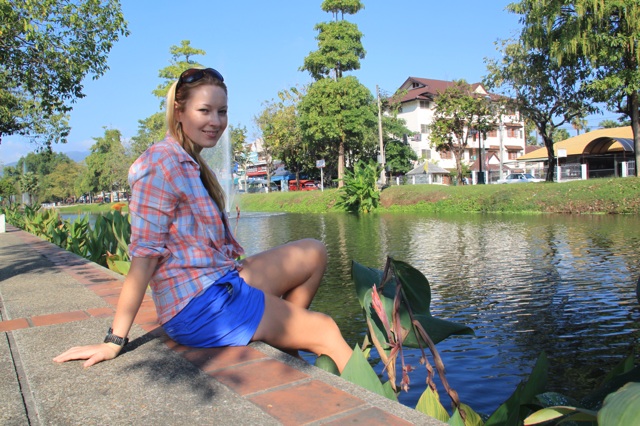