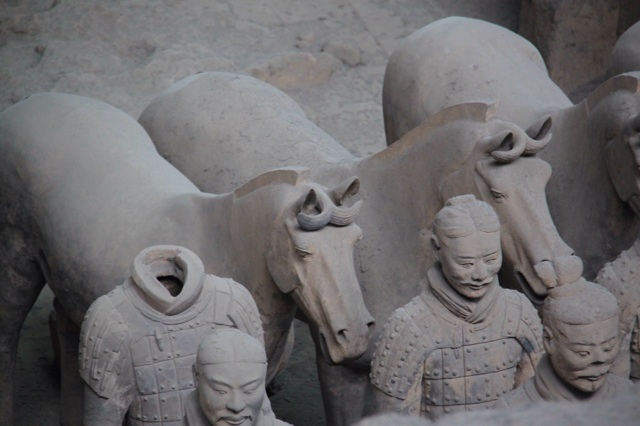 The terracotta warriors were discovered in 1974 by accident when some farmers were digging a water well. The site is now one of the most famous archeological finds in the world.

The warriors were built for the first emperor of China – Qin Shi Huang – as protection in his afterlife. They were buried with him around 210 BC! It is thought over 700,000 workers helped to build the army and there are thought to be over 8,000 soldiers and 670 horses!

Getting to the warriors was fairly easy. I caught a bus for the 10 minute drive to the train station (10p)! Then from there, a 50 minute bus (70p) which goes right to the entrance. Certainly better than paying £30 for an organised trip.

The entrance fee for the warriors is expensive. £14! Having a student card halved the price to £7.50.

From the ticket office, the entrance to the actual pits was a 15 minute walk away through shops, stalls and cafes!

The warriors are housed in three separate pits – the buildings have been built around the sites as they were found. I started with Pit 2. The medium sized one, used as the military guard. This pit has only been half excavated so far. Many bits of soldier lay half unburied! The warriors were made from clay, then baked. Each one was painted, although the colour has mostly deteriorated, so now they are clay-coloured. 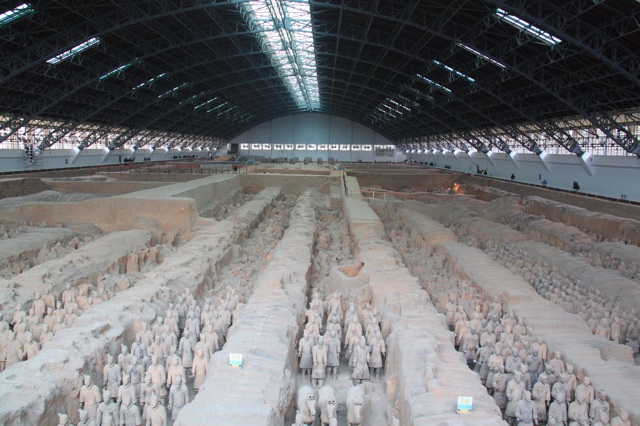 One thing I didn’t realise was that the soldiers are actually life size. From photos I’ve seen, they looked like foot-high models. But no, they are huge. But not only are they huge, they are all life-like and incredibly detailed.

No two soldiers are the same – they each have a different face and hairstyle/hat. Each soldier had a weapon and a detailed outfit. The weapons made of wood have long since deteriorated, but the metal tips of spears remain. The warriors are even categorised into ranks, denounced by the clothing they are wearing.

Not only were there soldiers, but also ‘support crew’ of animal trainers, musicians and acrobats!

Next, Pit 3. This one was tiny! The Command post, most of the higher ranking officers were found here. Just 4 horses at the entrance, then 3 separate groups of soldiers, a total of 72 warriors. Lastly, I went to Pit 1.

This is the largest and resembles an aircraft hangar! There were hundreds upon hundreds of warriors lined up in rows. Really cool! I like the horses best. 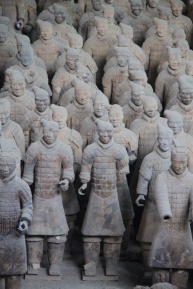 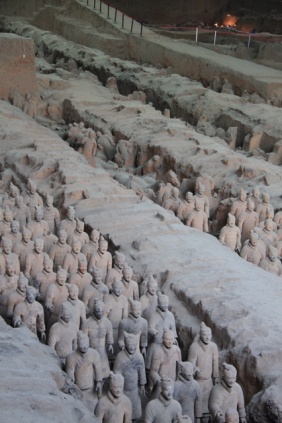 You could walk all the way around the pit, viewing the warriors from all angles. Excavation is not yet complete. I watched a team at work in pit 1, carefully moving dirt away to reveal more pieces of solider and horse!

One of the buildings houses a small museum containing bits found at the tomb of Qin Shi Huang. The bronze chariots were impressive. These have been made to a scale of 50% life size. Pulled by 4 ornate horses, the cart held a driver – all preserved incredibly well.

To return to the bus stop, I had to run the gauntlet of the shops and stalls. But it was actually really funny. The women would shout at you from their stalls – 30yuan for a box, no, 20yuan, no for you just 10yuan. Bartering themselves down before I had even reached them!

And everything ended up very very cheap – I bought 4 clay warriors and a horse for the total of just £1!

The return journey was the same, two buses and I was back in the middle of the city.

Xi’an (pronounced she-ann) is an ancient city, being more than 3,000 years old. This walled city was the centre of the dynasties – being the capital for 13 dynasties and ruled by 73 emperors. In the times of the Silk Road, this was the Eastern terminus. The city is grey and dull. Everything is grey, or covered in a grey dust.

Outside of the walls, the city is exactly as every other Chinese city, totally characterless. Many tall buildings and a power plant right in the middle of them, pumping out even more pollution. The 12m high city walls are still intact and are fairly impressive looking. Watchtowers are dotted along the edges, ornate and covered in lanterns! The bell tower is in the centre of a large roundabout. It used to contain a large bell that rang each morning. Just along the road is the drum tower. This one, as per is name, has a line of drums around the bottom of it!

Just behind the drum tower is the Muslim street area. Busy with shops, street stalls and the Grand Mosque. Street food here is popular, I tried some sweetened rice squares, just tasted like rice with honey on! Other popular foods were walnuts, flat breads and noodles soups.

Last week, a Chinese person from Xi’an was telling me China is like a tree. If you visit (the very Westernised) Shanghai, you are just seeing the leaves. Visit Beijing (has some history, but a lot of western influence), you see the branches. But visit Xi’an and you see the roots of China – the ancient city, where it all began! How very lovely.

In the afternoon, while waiting for my evening train to Pingyao, I looked at my ticket. 12 March.

I booked the wrong day!! How stupid.

The same for my train ticket in 2 days time – also the wrong date. Oh no!!!! It’s the iPhones fault really, the calendar doesn’t work – the entries from my computer have turned into a different time zone on my phone, so coming up on the wrong day, so I ended up booking the wrong day. I’ve only just noticed. I can’t really go a day later, it would leave me with barely 2 days in Beijing, which isn’t really ideal.

Turns out its not even possible to change (or even refund!) the tickets – all the trains are fully booked for today. So, after a change of plan (and now sadly missing out going to Pingyao) I’ve booked a flight to Beijing for tomorrow instead. What a waste of money. Xi’an is not a place for wifi. The wifi in the hostel doesn’t work. I’ve also been to 4 branches of McDonald’s (who usually have free wifi!) but nothing. Doesn’t help with the re-planning!!