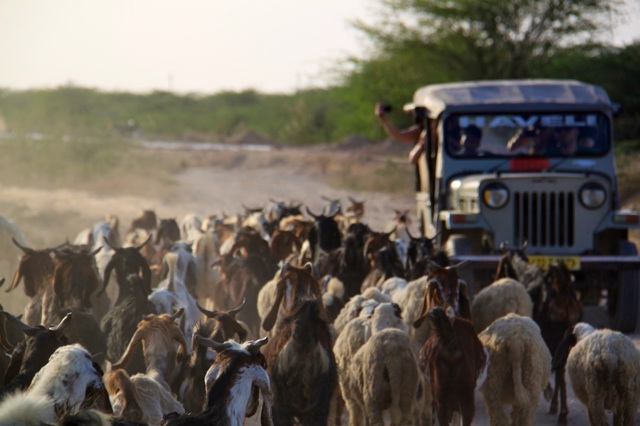 It was an early morning today, leaving at 4am to head to Jodhpur.

Rather oddly, the bus came and picked us up at the hotel before making its way to the bus station to pick up the rest of the passengers.

The bus was surprisingly nice. I was expecting the worst, but it was much better than I had thought! We had fairly large, comfy seats. It’s a sort-of double decker bus in that inside the main passenger area there is a second layer of seats above – you have to climb into a small cabin. Luckily I wasn’t up there. That would have been terribly claustrophobic.

The bus was good.

Apart from the horn.

Generally in Asia the horn has a lot of usage. But here, the horn is not just a horn noise. It’s a whole tune. And ridiculously loud. So no chance of any more sleeping.

Surprisingly it didn’t get all that busy and we were mostly left undisturbed. After 6 bumpy, loud hours on the bus, we arrived into Jodhpur at 11am and caught tuk tuks for the fairly long ride to the hotel.

Again, amazing, with a pool and huge huge rooms!

For lunch, we went to a restaurant in the town which is famous for its Thali. And this one was even better than yesterday. We were given 6 vegetable dishes (paneer, chick peas, lentils, potatoes), 4 types of bread (chapati, dahl something, popadoms), 3 dipping sauces, a cake, 2 sweets, 2 types of rice. And it just kept coming! So much food!!! And even after we had paid the bill, more came! Paan – betel nut.

This is what is traditionally chewed in countries such as Burma and Indonesia and men spit out red all the time. This betel was without the red, but was a betel nut leaf filled with a sweet coconut mix. I tried the coconut inside, it was ok, but didn’t fancy eating the leaf!

After lunch, we went shopping! Jodhpur is known for its shopping, selling various crafts and food. We went to a few shoe shops where they sell the traditional jooti shoes. These are leather shoes, covered in embroidered patterns. But I didn’t see any I liked, which was a shame. 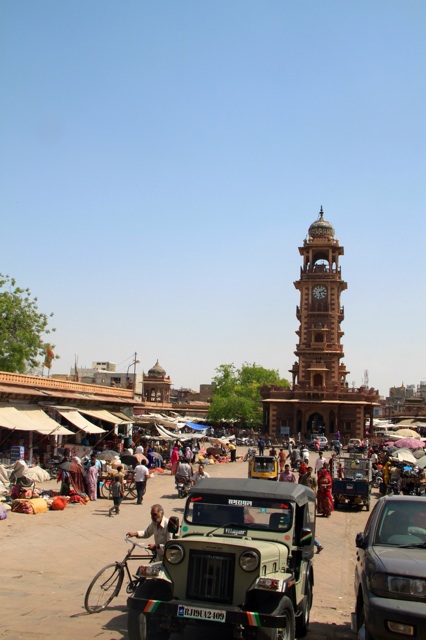 A sweet shop is not as you would expect, with jars of coloured confectionary. Here, sweets are small soft shapes, almost looking like fudge. I bought a few. They were ok. They had the texture of a soft fudge, but with a disappointing masala flavour.

The Sardar market surrounds the central clock tower. Leading off in every direction were sprawling stalls selling spices, rice, bracelets, kitchen ware, fruits and vegetables. It was really colourful – I liked the piles of spices and it was as you would expect a market to be. But we had so much hassle. Never had so many people asking for money.

It was annoying. The spice shop was amazing. The walls covered floor to ceiling with packets of spices. Anything you could ever want. The lady explained them all to us, let us smell them, drink tea and I ended up buying rather a lot!

There were also some random spice mixes – some to improve your brain and others to improve other things.

Next shop – bracelets. The shop we went to has been making bracelets for 300 years. They make them from lacquer and glass. The bracelets weren’t prominently displayed, but all kept in boxes. The man kept brining out colourful box after colourful box. They were all so pretty, I went a bit mad and bought loads.

There is a famous samosa shop here. The man apparently sells 10,000 per day (they cost 15p each to buy). That’s a lot of samosas! There was a queue out of the shop. I tried one, they were pretty large. It was amazing. A spinach, potato curry inside – the best I’ve had.

Also famous here is a type of lassi known as makhania lassi. Lassi is a yoghurt drink, they come in various flavours, plain, sweet, salted, banana, pineapple. I like them, I’ve tried sweet and pineapple. But this one has added masala spices.

One particular shop claims it sells the best lassi in the whole of India. It was good, you were given a cup of thick creamy yoghurt, with the traditional masala flavour. It’s so thick you eat it with a spoon. I felt a bit sick after my cup – it was very rich.

All different kinds of ‘normal’ foods here in India seem to have a masala twist. Obviously there is masala curry. Masala lassi. Masala fudge sweets. Tea is spiced and known as masala tea (which is actually quite nice in a small portion. I think it’s what we would call chai tea in England). Masala flavour crisps, masala flavour biscuits. And also oddly, masala flavoured Pepsi. I was awfully disappointed when my normal looking Pepsi bottle turned out to be masala flavour.

By the time we were finished shopping it was 4pm.

But now, off out of the town into the rural Bishnoi villages. We went in small jeeps, heading out into the desert. The first house was a pottery family. They showed us how they make pots on the wheel (not electronic! They spin using a stick and a large stone disc) which was clever. They were selling a whole raft of clay animals! At the second house, the lady let us have a go at walking with a pot on our heads.

We have seen loads of women walking around carrying large heavy pots and bags on their heads, making it look really easy. It’s not. It’s really hard. I could barely manage one step without it falling!

Her husband was sat under a small shelter just outside the house with a collection of weird looking instruments infront of him. This is an opium-making set!

Opium is traditionally taken by men here. They believe it makes them more effective at work. Apparently if they go to work in the fields having taken no opium, they can work for 4 hours. However, if they take opium, they can work for 8 hours. He showed us the solid opium block. A dark red, brownish brick. It’s made by boiling poppy with sugar, then leaving out to dry. To make the edible opium preparation, he crushed some of the small brick into water. The ran it through a cloth filter on the device infront of him. It’s collected in a small bowl with a spout. Then he performed a small ritual offering, dripping it on various parts of the instruments and giving thanks. Then he offers it to us.

I didn’t have any.

But other people did. Apparently it doesn’t taste of anything.

We were driving through the rural desert and villages, women heading goat, children playing in the sand and men building a new road. People waved at us as we passed! The last stop was a guy who makes carpets, weaving them on a large loom. He showed us how they weave them, moving the threads by hand over and under. It looks like an extremely long process. Making one small rug takes a month. Despite being in the middle of the desert, they have mains electricity and the governement also recently gave them solar panels.

On the way back to the city, we saw some wild peacocks and small deer. So cool! I’ve never seen wild peacock before. Only in zoos. They were so colourful. By the time we got back, it was 8pm. And I was shattered. Still full from the ridiculously large lunch (and then snacking all afternoon!), I didn’t have any dinner.