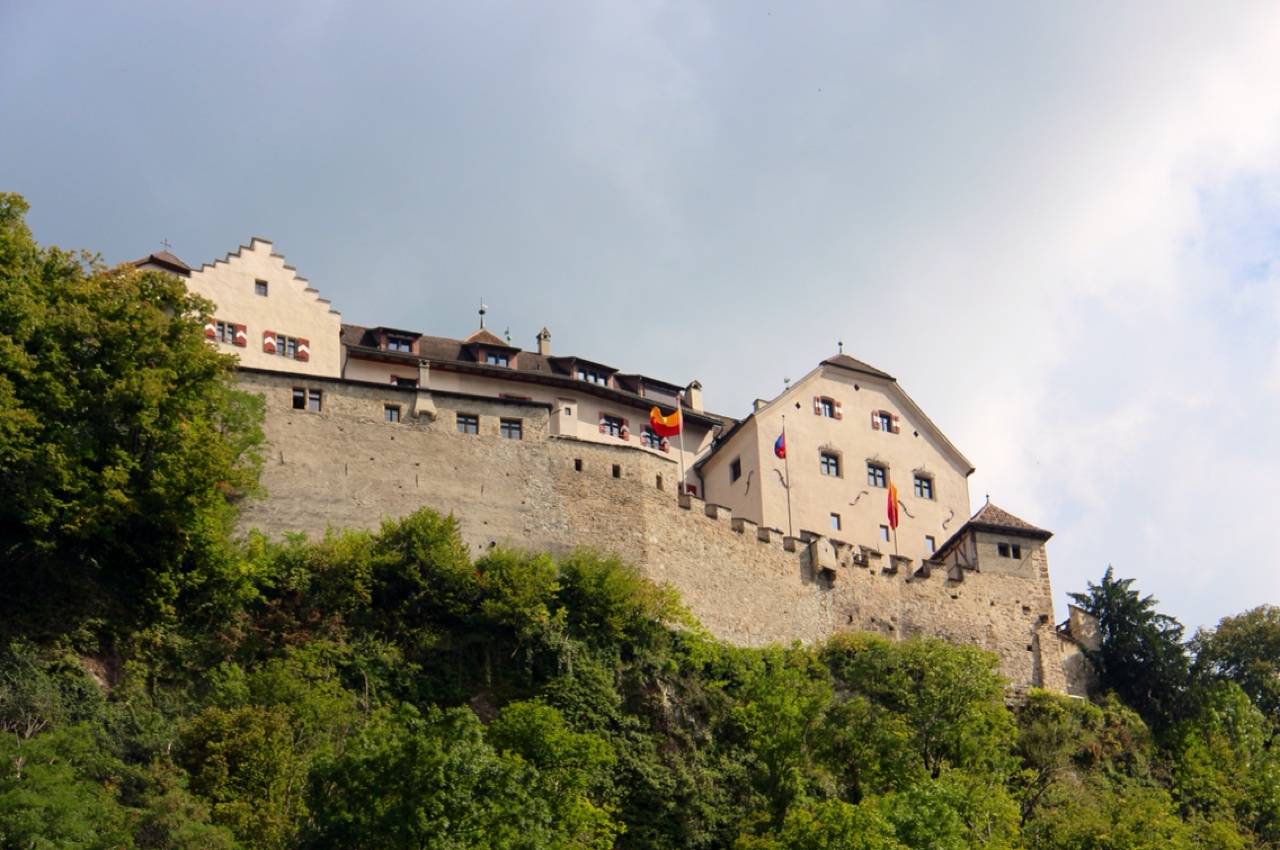 After an 11 day break, off for another weekend!

Back on the train to Gatwick. Our plane left on time at 6.15pm. Surprised that it takes only just over an hour of air time to Zurich, Switzerland. Although after loosing an hour, we landed at 8.45pm. We ended up being in a satellite terminal, so had to get a little train over to the main terminal. And then a lot of walking before we finally emerged. The whole airport seemed fairly new and was very nice.

The trains into the city are very frequent (nearly every 5 minutes!) and easy. A ticket is 6.60 francs (£4.40), then we popped down to the platform and the train was pulling in. A double decker, which was clean and quite quiet. And it was only a short 10 minute ride into the city.

We arrived into the main train station, which was very big! It was a really pretty old building. The first train left here in 1845. And our hotel was only a short 5 minute walk away.

After a not-so-promising weather forecast of rain, it was surprising to wake up to a blue sky and a revised forecast of sun! Hadn’t really packed for this!

Zurich is Switzerland’s biggest city and financial centre. The city is spread around the Northern shores of Lake Zurich and then split in half by the River Limmat.

We wandered down the Bahnhofstrasse – the main shopping street. It was only 9.30am and already busy with shoppers and people sat along the streets in cafés. We ended up in the old, largest department store – Jelmoli. Rather like a small Selfridges. The food hall was amazing! So many small stalls selling freshly made food, each section with a different theme. Lots of variety of fruits and vegetables piled into pretty displays and rows of pretty looking cakes. But it was all expensive.

We bought a couple of pastries and some yoghurts for breakfast and continued to wander around.

At 10.30am we headed back past the train station, to the main bus terminal. Going on a day trip!

Our bus first made a small circle around the city (which was a tad pointless as most of the roads are pedestrianised and we will walk around tomorrow anyway). But we did stop off at one of the churches – the Fraumunster.

This church is famous for it’s stained glass windows. These windows were designed by Marc Chagall in 1971. They are not the traditional church stained glass window, rather they are much more modern. With streaks of colour and blobs of people splattered across them. They are apparently ‘world famous’.

I had never heard of them…!

Just outside of the city is the Lindt factory. Most of their chocolate is manufactured around here, but they no longer run factory tours, which is a shame. We drove past and it was just a grey, industrial building. They collect the milk from all the neighbouring farms for use in the chocolate. We saw lots of these Lindt cows!

Then we headed East, out of the city, along the shore of Lake Zurich. We went through some expensive neighbourhoods, full of very pretty, very expensive houses with great views of the lake.

Then we were out into the countryside, with small farms, corn fields and some cows (Lindt cows).

Our first stop – Rapperswil. A picturesque old town, also known as the city of roses. 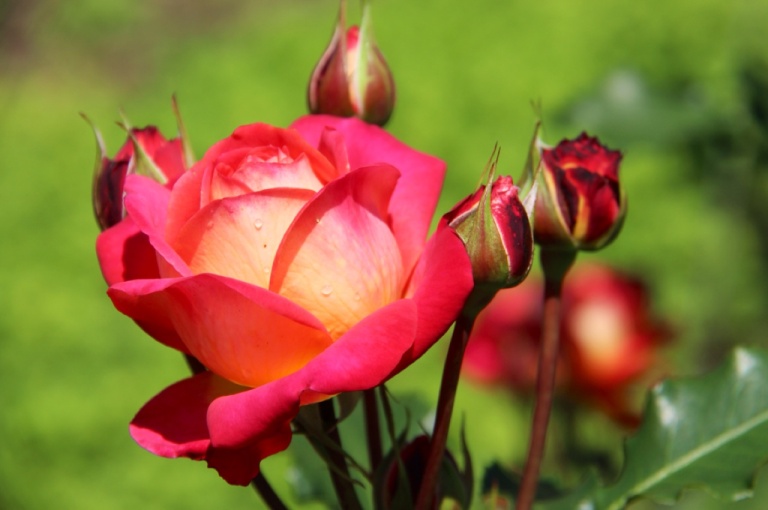 Perhaps due to the small walled rose gardens. We visited one of these such gardens, it was just like a normal small rose garden…. Up on the hill was a medieval castle and a church. It was busy with weddings. We spotted at least 3 brides around having their photos taken!

There were nice views from here, across the brown roofs of the small town, church spires poking through, then out towards the lake. The streets were narrow and cute, and there was a small harbour where locals were having a small beer party. It was really pretty. We sat by the small harbour, with a view back across to the old buildings and the castle and had some lunch.

Then it was back onto the bus, making our way up into the mountains. We crossed through the Ricken Pass, up over 2,000m above sea level, with views of the Alps. This is known as the Toggenberg region.

Here it was hilly, covered in cows (Lindt cows!), cute wooden houses, the odd ski lift here and there, and just very, very green. It was really pretty. After coming down out of the mountains, we passed through a valley and then along the banks of a river. 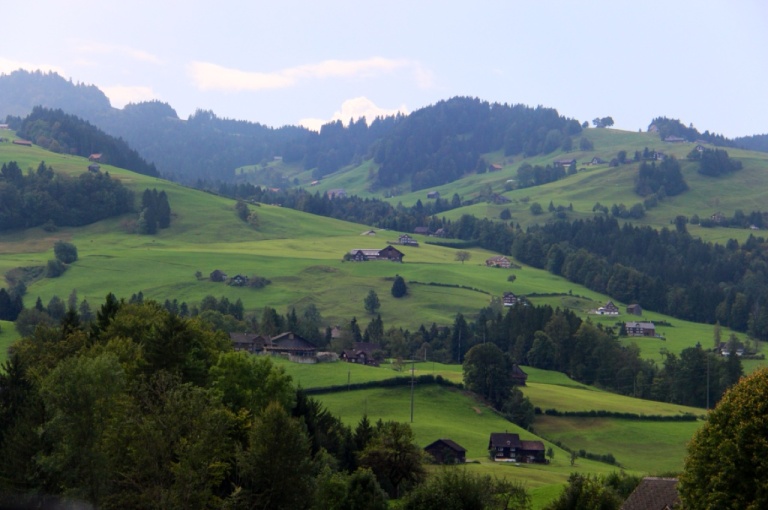 There was a bridge heading across the river – this is the border of Liechtenstein!

A complete non-event. Marked by a small sign and differing flags on each side of the short bridge.

At 24km long and 160km2, Lietchenstein is fairly mini and wedged neatly between Switzerland and Austria. Liechtenstein is the richest country in the world (per the GDP per capital). Although sort of cheating when your entire population is just 37,000 people. What is the capital of Liechtenstein?

I struggled with that one too. Answer – Vaduz.

And that is where we were headed. Barely 5 minutes later we were there, and parked up in a small carpark. From here, there were pretty views up into the mountains – and up to Vaduz Castle, the residence of the prince of Liechtenstein.

There was a (small) row of shops which went something like this: watch shop, souvenir shop, another watch shop, cafe, cafe, cafe, clothes shop, another souvenir shop, museum. And that was about it. For the entire capital city. Great! So after about 5 minutes of browsing (very expensive!!) Chinese made souvenirs, we bought some postcards and sat outside with an icecream. It is possible to get a passport stamp from the tourist office (a kiosk in the carpark) for CHF 3 (about £2). Which of course I did get. Although this is the only stamp the country has, it isn’t actually ‘official’. And is more of a souvenir stamp.

Well after that exciting excursion into Liechtenstein (let’s face it, I only came here to tick off another country!), we were back on the road again and heading into wine country!

Who knew that Switzerland produces their own wine?!

Only 2% of production is exported (and that is to neighbouring Germany), so no wonder I’ve never tried it! We drove through the small village of Maienfeld, it was so cute. Tiny, winding streets and small houses surrounded by grape vine plants. 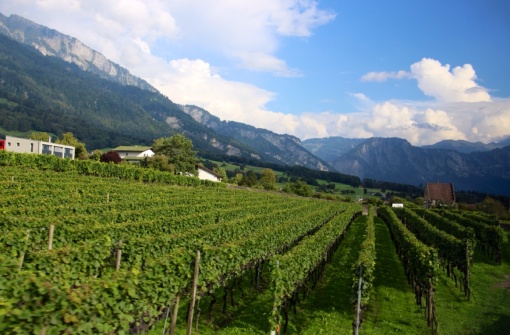 Just outside of the village is the Heidi house – the building where the Heidi tv programme was set. To get there was a 10 minute walk around a hill. It was pretty – a view across the valley, next to a field of cows. When we got there, there was a small field with some goats too! Cute! We didn’t go inside, so just enjoyed the scenery.

And the goats and cows and chickens!

And then for the drive back into Zurich. We went a different route (the more direct motorway route!) and went past Lake Walen. A ridiculously green/blue lake, dotted with sail boats and small wooden houses. It was so pretty.

It took just over an hour to get back to the city and we were back around 6.30pm. Time for some dinner! 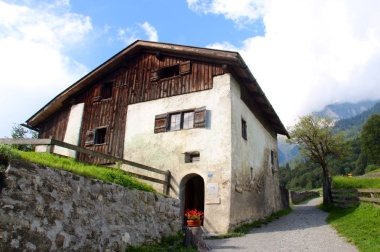 I did a bit of research before coming and found a really popular vegetarian restaurant. It was only a 10 minute walk away, so we headed down there. It was packed! Spread out over several floors and out onto the street.

We took a bit of a detour to get back to the hotel and had a walk alongside the river and popped into a coop. The local supermarket chain (different to the English coop). It was packed! But we picked up a couple of bits for tomorrow (and some essential bars of Swiss chocolate!) Even the supermarkets are expensive here!