And back to Heathrow!

At 4am, the roads were totally deserted and it took a record 21 minutes to reach terminal 5. Amazing!

If it was always that quick, it would be great! It was quiet. No one around at all.

Check in didn’t open until 4.30am, but I only had a few minutes to wait. Bag checked in, no one at security, and closed shops. A very quiet terminal!

My first flight, at 6.20am to Madrid was delayed. Missing passengers, annoying. After their bags were taken off, we finally headed off, half an hour late. Not too bad – but my layover in Madrid is only 90 minutes!

It took 2 hours to reach Madrid. Landing at 9am (10am local time). Still so early.

Back in April, I flew to Mexico and spent a few weeks making my way down the Central American countries, passing through Belize, Guatemala, Honduras, Nicaragua and ending in San Jose, Costa Rica. I loved it. And now I am heading back! Basically to continue the journey southwards from where I left off – from San Jose, Costa Rica, down to Bogota, Colombia.

And my Spanish has not improved. Last time I flew on the airline Iberia (to Peru in 2010…time flies) it was pretty bad. An old plane with no tv. For about 13 hours of a daytime flight. Bored doesn’t even begin to cover it. x 2 flights. And those were the days pre-iPad/iPhone (if anyone can remember those?!) I said I would never fly them again.

So this time, when Iberia popped up as being the cheapest flight (by almost £200), I immediately dismissed it. But actually the flight times worked better, with shorter layovers. I also checked which planes they are running this route, and they appeared to be newer ones (with TVs and USB charging slots). I have my fingers crossed.

But wow, how times have changed since 4 years ago. I got a tv and USB charging slot. And wifi and a nice comfy seat! Wow!!

Again, déjà vu, people missing, so we were delayed whilst their bags were removed. Finally off! Back to Costa Rica! We took off about half an hour late.

I settled in to watch a couple of films (Malificent and Grand Budapest Hotel), try (and fail) to sleep. And do nothing. Usual plane activities! Food was a bit rubbish. I had requested vegan. And I got vegan. Plain lettuce. Plain green beans. Plain rice. Pineapple. Well, it was ok – just not the most exciting of meals!

We landed just before 4pm into pouring rain. It was not possible to see anything at all until we were thumping down onto the runway and skidding along!! (Bit scary!) This is not a new country for 2014, so can’t add to my tally!

Getting off the plane was surprisingly quick and so was the passport queue. The guy was a bit weird….I thought he greeted me with ‘hola pretty girl’ (but I gave him the benefit of the doubt, in my tiredness i may have misheard). But I definitely did not mishear the ‘enjoy your stay beautiful’ when I walked away. Eugh.

I had pre-arranged a pick up at the airport – always a good idea after a long flight!! So i could avoid the gauntlet of taxi drivers – although they weren’t too bad. One even helped me to find my shuttle guy! That was very nice!! A 15 minute drive through traffic (and spotting a couple of minor accidents later!) I arrived at my hotel. 5pm! That was all very quick!

Last time I was in Costa Rica it was more of a dry season. It was still green, but it wasn’t humid. This time, it’s so humid and has the ‘wet tree’ smell that I love so much about Borneo! I’m too tired to do anything, even though the pool looks so inviting! Time for a shower and bed!

I am unable to travel anywhere without some kind of drama. And here is no exception – yesterday the Turrialba volcano erupted.

It’s just east of San Jose, where I am currently. And the neighbourhood I am staying in has had volcano ash settle on the ground. Today I am not doing anything at all! That is so unusual for me!!

I managed to sleep for about 12 hours, then headed down for breakfast. You never know what to expect for breakfast and I usually hold expectations quite low. However today was just amazing!!! So much fruit! Watermelon, passion fruit, papaya, pineapple, guava, physalis, mandarin, an orange fruit I’ve not tried before. And my absolute favourite – rambutan!!!! Oh it’s been so long. 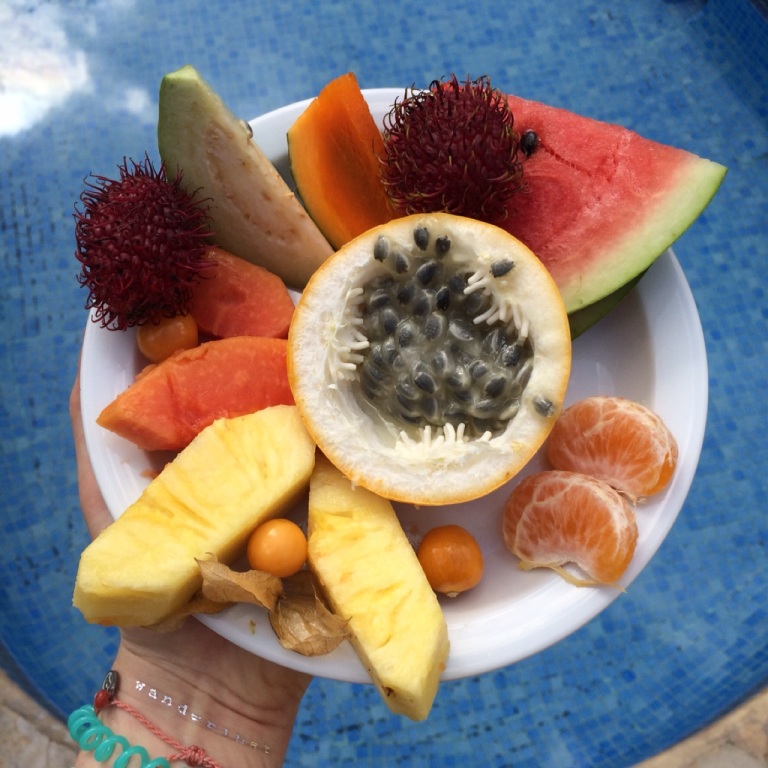 The excitement didn’t end there, I also ordered banana pancakes, which were delicious! I enjoyed this feast sat out in the garden by the pool in the sunshine. The view was lovely, up into the mountains. So pretty 🙂 The rest of the morning was spent feeling a bit sick from eating so much food, swimming, sitting in the sun, swimming, sun, swimming etc.

Until 12pm and it suddenly became a bit dark and cloudy. It looked like rain, but I wanted to go out and explore! I’m staying in Cariari neighbourhood, which is really nice and quite posh. Just down the road is a small park with some ponds and unusually coloured ducks – duck shape, turkey colourings!

A short walk down the road was a small shopping complex – a gym, pet shop, supermarket, several restaurants and banks. It was nice! The supermarket was quite fancy – I really wanted to buy some fruits, but disappointingly they didn’t have a lot. So I ended up with half a watermelon and a (non native!) kiwi.

I am also remembering how expensive Costa Rica is! I also popped into the chocolate shop, here they make chocolate from the beans and the shop smelt amazing! They had lots of different flavours – chai tea, cinnamon, pepper, pineapple, coconut, almond, raisin etc etc. I bought a couple of slabs, $3 for a tiny bar is quite expensive! I made it back to the hotel before the rain started.

And wow did it rain! I don’t think I have ever seen rain so heavy before! Just a white sheet of water – I could barely see out of my window. And it continued and continued alllllllll afternoon. I didn’t do much else, just enjoyed doing nothing! And had another early night!

My sleep was rather interrupted at 1.30am by a loud noise and the building was shaking. A bit scary! I wasn’t sure if it was an earthquake or not, but I could hear anyone up and about. So I went back to sleep. Then it happened again at 3.30am. The same tremor and building shake. Scary!!

This time I didn’t manage to get back to sleep, I tried, but my body still thinks it is 10am. So I just stayed in bed and listened to the birds waking up. It sounded like I was in the jungle – so cool! This morning is another beautiful morning, clear and sunny with a lovely blue sky.

I wonder how long that will last….. Time for somewhere new. I’m heading to the Nicoya peninsula. There are a couple of options to get there, a $20 bus (which leaves from the city centre and would cost about $20-30 to get to the bus stop….), or a $60 private van. So I’m taking the easy option and getting a van! I booked the van last week, bit of a hassle and never received a confirmation. But the hotel managed to reconfirm it for me, so hopefully it will turn up!