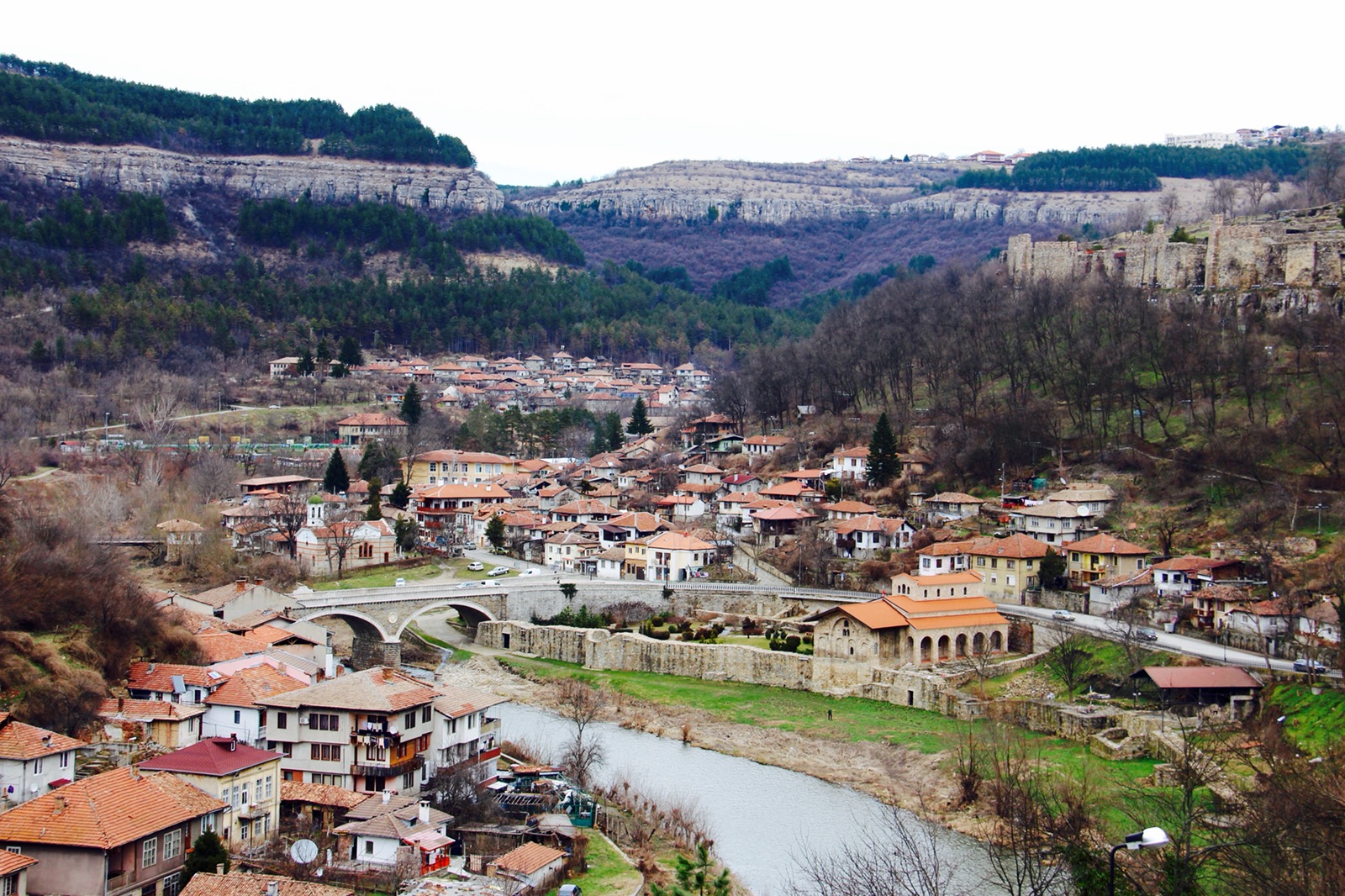 So I’ve barely been in Romania for 12 hours, but going off to Bulgaria for the day!

It was difficult getting up at 7am – which is really 5am. And it was pouring with rain. We were being picked up at 8am just across the road. Rather optimistic to think we could buy breakfast somewhere, there were no cafes within sight.

So we just ran through the rain for barely 5 minutes across to the Romanian Atheneaeum – an ornate concert hall built in 1888 – where we were met by our driver for the day. It was just us and one other woman – brilliant!

It took nearly an hour and a half to reach the border. We drove through the city of Bucharest – largely dull, grey buildings. Some old and almost ornate, most just drab. The Palace of Parliament is the second largest building in the world (after the Pentagon in Washington), construction began in 1984, with 3,100 rooms and is apparently still not finished! It looked pretty large!

Heading out of the city, we went through several poorer neighbourhoods. It’s common here to live in apartment blocks. But they weren’t uniform in shape – each building looked like it should just be a cube. But instead, some people had added balconies, other people had added extensions of rooms, so each building has ended up looking like a bit of a jenga block! The whole area was poor. The average wage of a Romanian is 400 EUR per month.

Just past here was a cemetery, full of the graves of those who were killed in the 1989 uprising – largely aged 18 to 25. We also passed by some gypsy mansions. Romanian gypsies have a bad reputation – particularly in London where they are known as thieves and homeless people living in parks. But apparently only make up 3% of the Romanian population. I have to admit that my impression of Romanian people was largely based on this small minority.

After we left the built up areas, we were into nothing-ness. Just fields and a random house here and there. The roads started to deteriorate as we reached the border – so typical!! Exactly what happens in African, Asian, Southern and Central America! And we were navigating around huge pot holes.

The border to Bulgaria is an actual border. You first pay a fee to cross – about £4. Then drive across a bridge which connects the two countries, over the Danube river. That old river again!

And we were into Bulgaria!

The first thing that surprised me was the use of the crylic alphabet – I hadn’t realised that Bulgarian was similar to Russian. And I now couldn’t understand any sign.

We had to show our passports, but this didn’t take long and didn’t have to get out of the car. I changed a bit of money into Bulgarian lev. Actually a very good rate on the border! We stopped off at a service station to get some food – a Shell! And I was so surprised to find vegan bars!! Amazing!!!

I got a biscuit made from dates and almonds, it was so gooey and tasted like gingerbread, as well as a couple of bars made from dates, cranberries, chia seeds and maca. So delicious! They were all local Bulgarian made too! Who would have thought that Bulgaria was a place for superfood vegan snacks?!

Then I fell asleep. Only for half an hour, but woke up to no rain and a blue sky, right as we arrived at the Ivanovo Churches – churches built into the rocks, on the sides of some small cliffs. 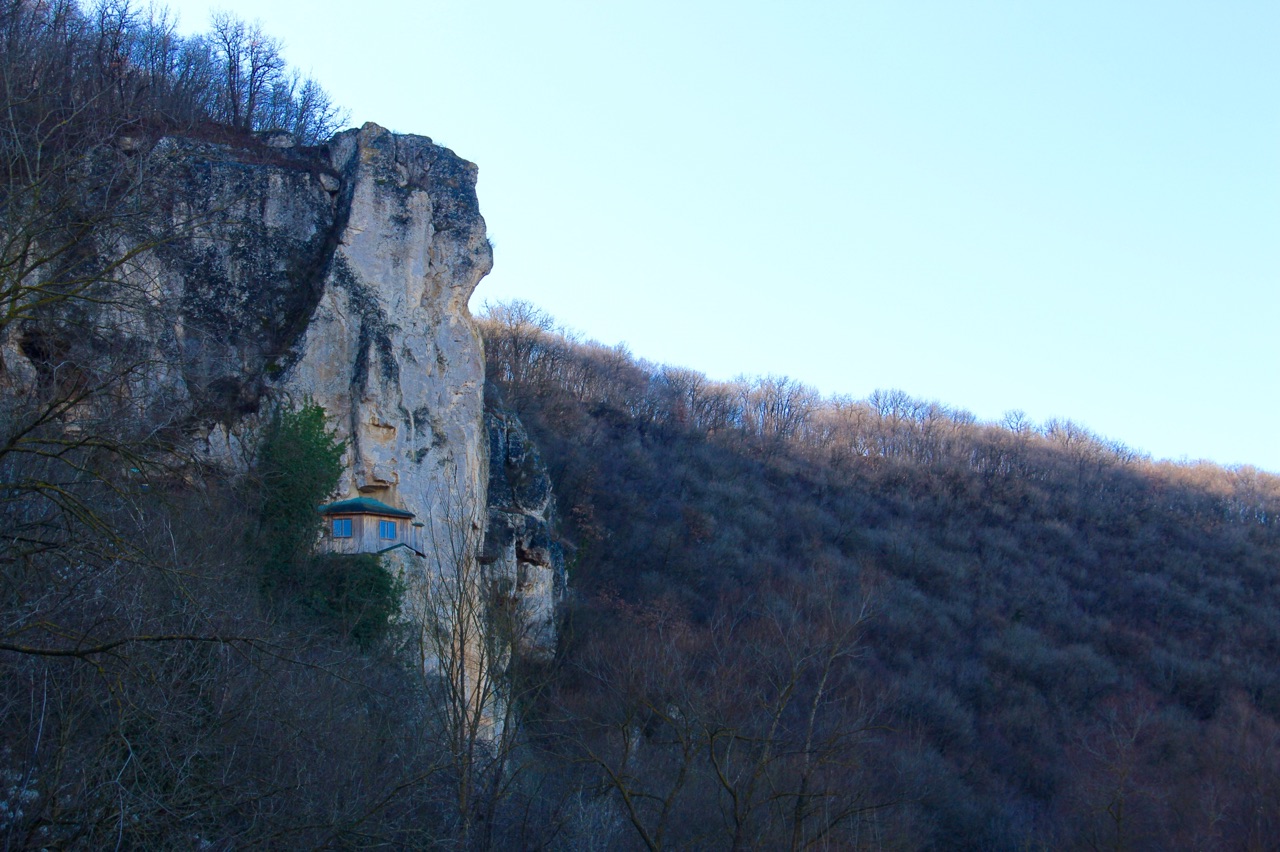 These churches are famous for their XIII-XIVth century frescos and have been a UNESCO world heritage site since 1979. It was a small hike up some stone steps to the entance to the churches. During January, these churches are closed as they are not such a popular tourist site. So we couldn’t go in – but you could peer through the gate and see the frescos anyway (for free!), which is as good as anything!

We carried on walking around the edge of the rock and came to a look out point, where you could see all around the Valley of the Rusenski Lom River. It was pretty, but would be much nicer in summer when the trees are green and full of flowers.

Back in the car for another hour, and I slept the entire way, to the city of Veliko Tarnovo. Apparently one of the most beautiful cities in Bulgaria, located on the banks of Yantra River.

We stopped for lunch at 1pm at a restaurant with great views across to the fortress and were presented with a 20 page menu of typical Bulgarian food. I was so hungry. But 19 pages of which were either alcohol or meat.

Bulgarian food is a lot of meat stews, cheese and chocolate biscuit dessert. There was 1 page of salads, of which 1 was vegan! It didn’t sound that exciting, cabbage and carrot salad. But when it arrived it was huge, a massive plate of vegetables, and so delicious!!! And with a side of potato wedges…!

By the time we headed back out, unfortunately the clouds had come back over. Wish I had taken photos before lunch instead – with the bright blue sky!

We were then left to wander around by ourselves for several hours.

Our first stop was the fortress – with the ruins of the former Tsarevets Palace and a church on top of a hill. There were lots of stone ruins, no idea what any of it was. But the views were lovely.

The city is built into the side of a hill, with buildings cascading down the sides. So pretty! As we got higher and higher up, you could see all around, several bridges weaving over the river, which wound around the small parts of villages, making up the larger city. The church on top was a bit weird. It was empty inside. The inside walls were covered in grey and black, almost horror style paintings. Totally weird! Never seen a church like it! And a souvenir coin maker by the door. Right…!

There were a surprising number of people up here. I had never heard of this town, nor this place until I literally arrived. Wonder where all these people were from. It got a bit boring quite quickly, and after we were done with the fortress, we made our way back down the hill, then up the hill into the town. We passed several estate agents. Signs were in both English and Bulgarian and I was stunned. EUR9k would buy you a fairly respectable 3 bedroom house. EUR20k a very large house with a pool. And EUR100k a mansion with sprawling fields and an outhouse for staff. Wow. Just wow. What a difference.

There really wasn’t much in the town, derelict houses, fancy graffiti, a few random clothes shops, a couple of tat shops and that was about it. Further up the hill it became quite busy with people – no idea whether they were locals or tourists as I couldn’t recognise the language they were speaking. But either way, I’m not sure what they were all doing. As there was nothing to do.

We were picked up at 4pm and began the long drive back to Bucharest. And I fell asleep again, all the way to the border. Not doing too well today!! The border was a little slow this time, a long queue of cars. But we were soon back in Romania and then back into Bucharest. We were dropped off at the hotel just after 7pm and went up to our room for a lay down.

Undecided whether to go out for dinner or not, we browsed what was around and came across a really highly rated sushi place. With a whole vegan menu! It wasn’t far away, so popped out to have a look. Unfortunately it seems you need a booking wherever you want to eat out here! But they could do take away, in an hours time. To waste some time, we sat and had some mojitos back at the hotel and 90 minutes later went to pick up our sushi! The men were making it right infront of us, made so quickly and so neatly! They can’t have stopped all night! Back at the hotel, curled up in bed, with a load of vegan sushi and edamame beans – it was so delicious!!