Not only did Air Asia change my outward flight, but they also changed my return flight to KL too.

I can no longer leave the island in time to make it to the airport. So even though my flight is tomorrow, tonight I’m staying in Banda Aceh City, which I’m actually excited about!

But that does mean I have to leave this tropical paradise a day early.

But first, time for some diving. After a final banana pancake breakfast (72p!) I headed off on the boat at 9.30am.

We headed further from the resort, to the northern tip of the island and the canyons. It was really pretty – so blue, so many sea fans and some nice canyons (!). There was supposed to be big stuff here, but none of it was around this morning. I didn’t mind – I actually really enjoyed it. Just such a shame that it was my last dive!

After feeling a bit blasé about diving again, I really got back into it yesterday – but now I’m finished for this trip already!

I washed all my stuff and rather optimistically put it out in the sun to dry. 2 hours later, most of it was still soaking wet…. For an early lunch, I got a final coconut from the stall down the beach (50p) and finished the fruit that I had bought in KL – rambutan and passionfruit.

I left in a taxi at 1pm (£4.70), the drive was much quicker this time, taking 40 minutes to get to the ferry terminal. I bought a ticket (£4.40) and sat and waited. Although I’m not too good at sitting and waiting, so I went outside and bought stuff instead. I got some sweet chilli fresh cassava chips – they were sticky and so delicious (50p), a small chocolate pancake (10p) and lots of salak (snake fruit) for 50p. I love this fruit – it’s been ages since I last had it! They were selling them straight off a chunk of tree!

The ferry left on time at 2.30pm, it was much busier than when I had come to the island. We arrived back into Banda Aceh town at 3.20pm and after the usual scrum to get off the boat, were bombarded by taxi drivers.

They were quoting ridiculous prices to go just a few miles down the road. Eventually the guy agreed on a sensible price (although I have no idea how much it should cost), £2 seemed quite reasonable.

It took about 15 minutes in the becak (sidecar of a motorbike) to reach my hotel in the city. The driver told me all about his 3 wives (you’re allowed 4 under Islamic law) and kept asking me lots of questions in Indonesian – I got there with my answers eventually, but it was a bit exhausting.

We drove past some farm areas, a mosque every few meters and finally into the city. Lots of shops and sprawling market. I had been debating staying at a nice hotel on the outskirts of town, but in the end decided on a cheap and rubbish looking one in the centre of town, so that I could wander around! 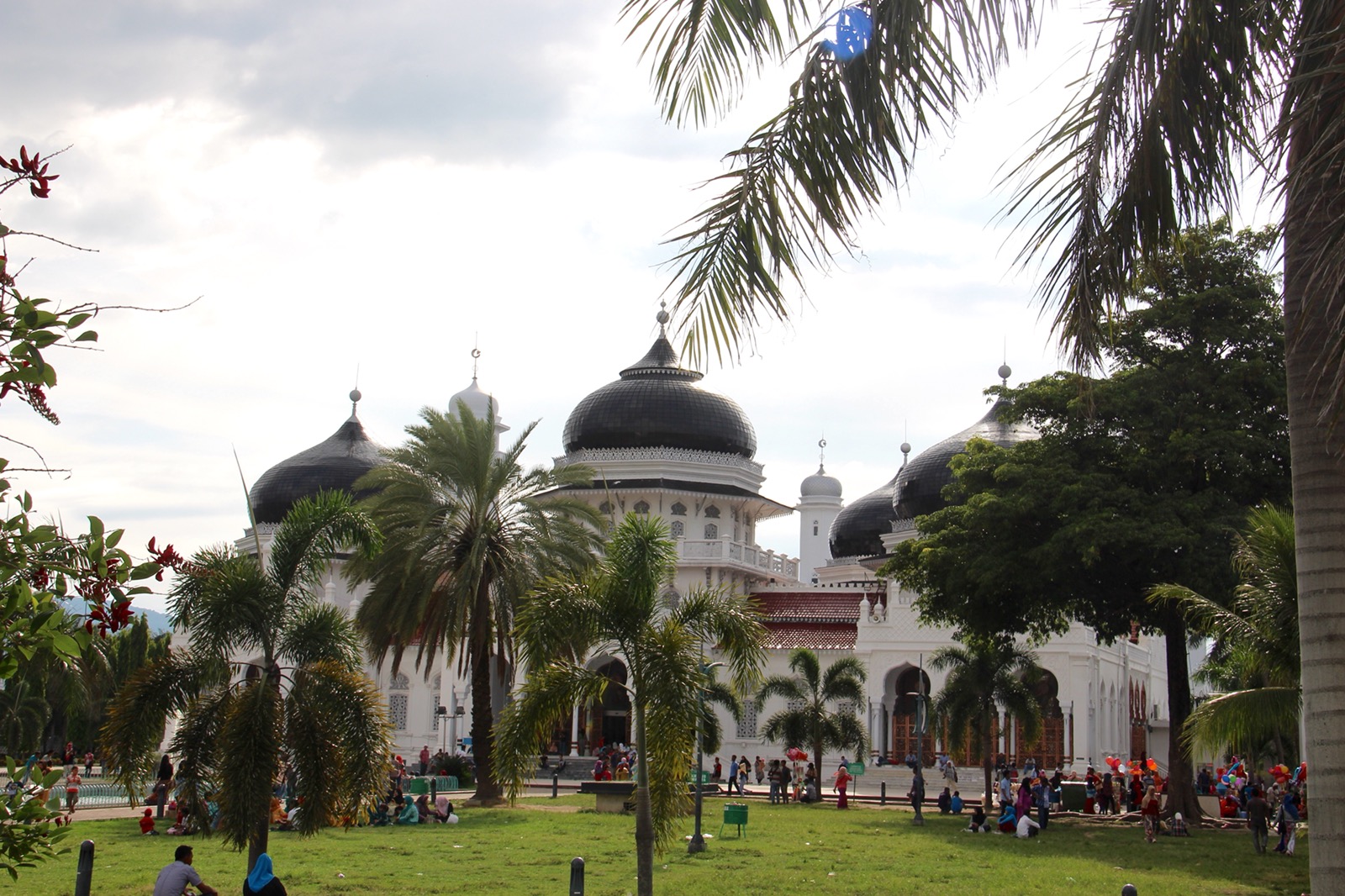 The ferry port at Ulee Lheue (where I just came from) was tsunami ground zero. It’s now been rebuilt, along with most of the town. During the tsunami, Banda Aceh was under a 10m high wave and lost 25% of its population, which is a scary thought. And despite being recently rebuilt, much of the town is already very tatty and usual-asian-town rundown with peeling, faded paint and rusty roofs. I quite like it though!

After dumping my bags, I went out for a walk. First task, getting a tiny bit more money, I needed about £2.50 more just to get me to the airport tomorrow and some dinner tonight. 8 ATMs later and I finally succeeded – it was literally a street lined with banks! And I tried every single one. Why is it so difficult to get money at the moment?!

I made my way to the grand mosque – Baiturrahman Grand Mosque. This mosque survived the boxing day tsunami. There were lots of people around, so many food stalls – mee goreng, nasi goreng, ‘KFC’ chicken, fruit, juice drinks of every colour and desserts that come with coloured jelly and sweet corn. There is a large garden with fountains infront of the mosque. But I was stopped at an entrance, rather rudely by a man telling me I needed a head cover. I don’t have one. So I wasn’t allowed anywhere near the garden. Oh well, I could stand at the gate and take photos anyway! 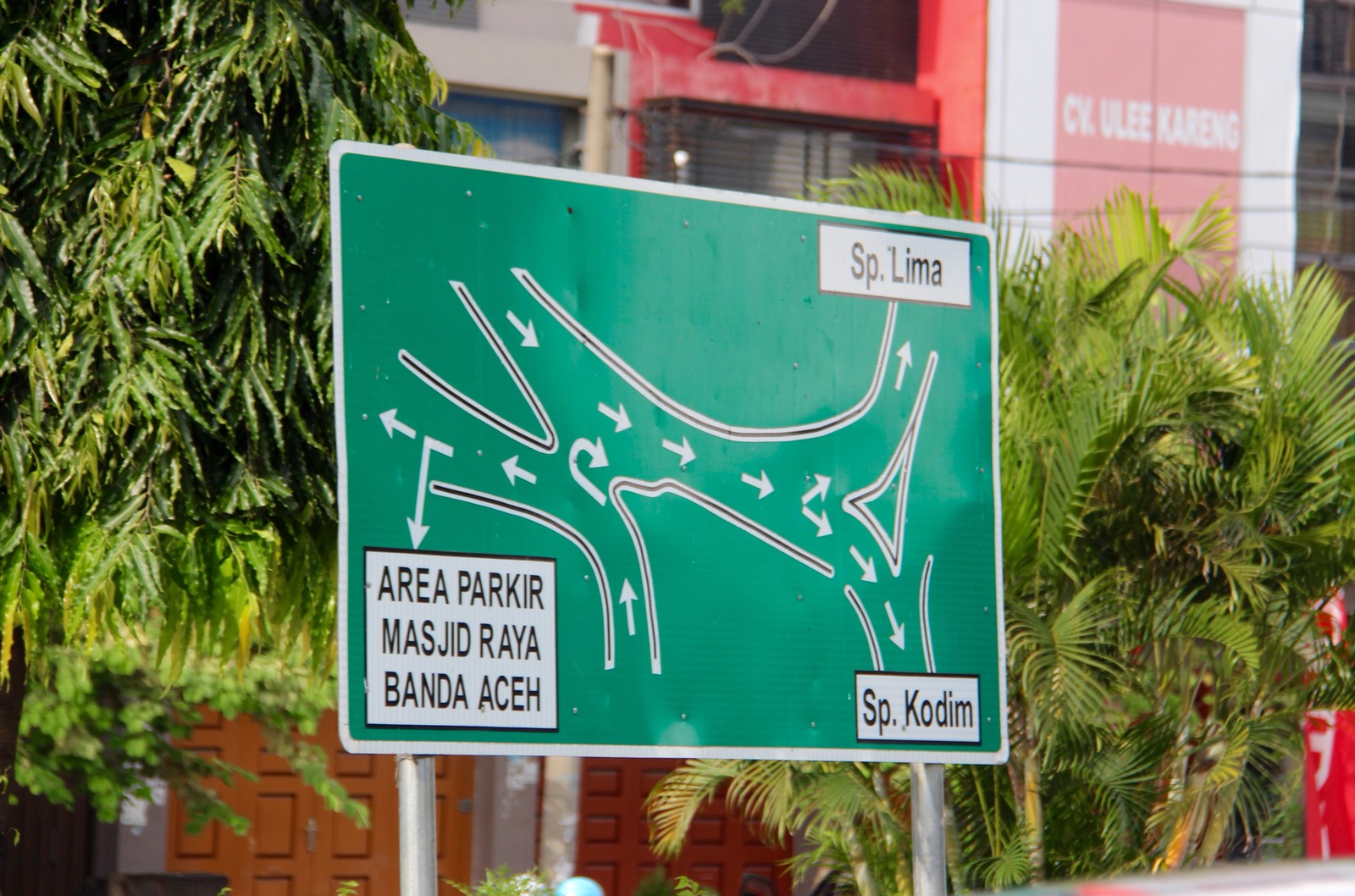 Just next to the mosque was a large market area selling all kinds of things – clothes, electricals and other bits and pieces. I wandered back to where I had come from and a bit further past the hotel, back to the markets.

On all my wandering, people had shouted at me from motorbikes, from cars, from restaurants and other pedestrians, all saying hello, asking how I was or where I was from. It seemed that everyone wanted to talk to me. It was the same in the market, it felt like every single seller (and security guard!) wanted to talk. It was friendly hassle, not nasty hassle, but it got a bit tiring!!!

The market was cool, all kinds of fruits and vegetables – large amounts of bananas, salak, mango, watermelon, green leaves of every kind, onions and chillis. There was a fish market too – massive tunas as well as jack fish and other silver fish. Thankfully no sharks, rays or reef fish.

I wanted to buy some fruit, but it’s all quite intimidating when everyone is trying to sell you things. And I don’t want a kilo, I just want one!

What I really wanted was jackfruit, I spotted lumps of it around (you can’t buy a whole one! They are huge, you just buy a cut-up chunk), but all pre-cut and covered in flies. I found one old man who had a massive jackfruit which was basically uncut, so I asked for a middle piece with no flies and he kindly cut it all up for me (I actually ended up with quite a huge piece, it looked small against the rest of the fruit)! I got a mango too, not too bad at 75p. 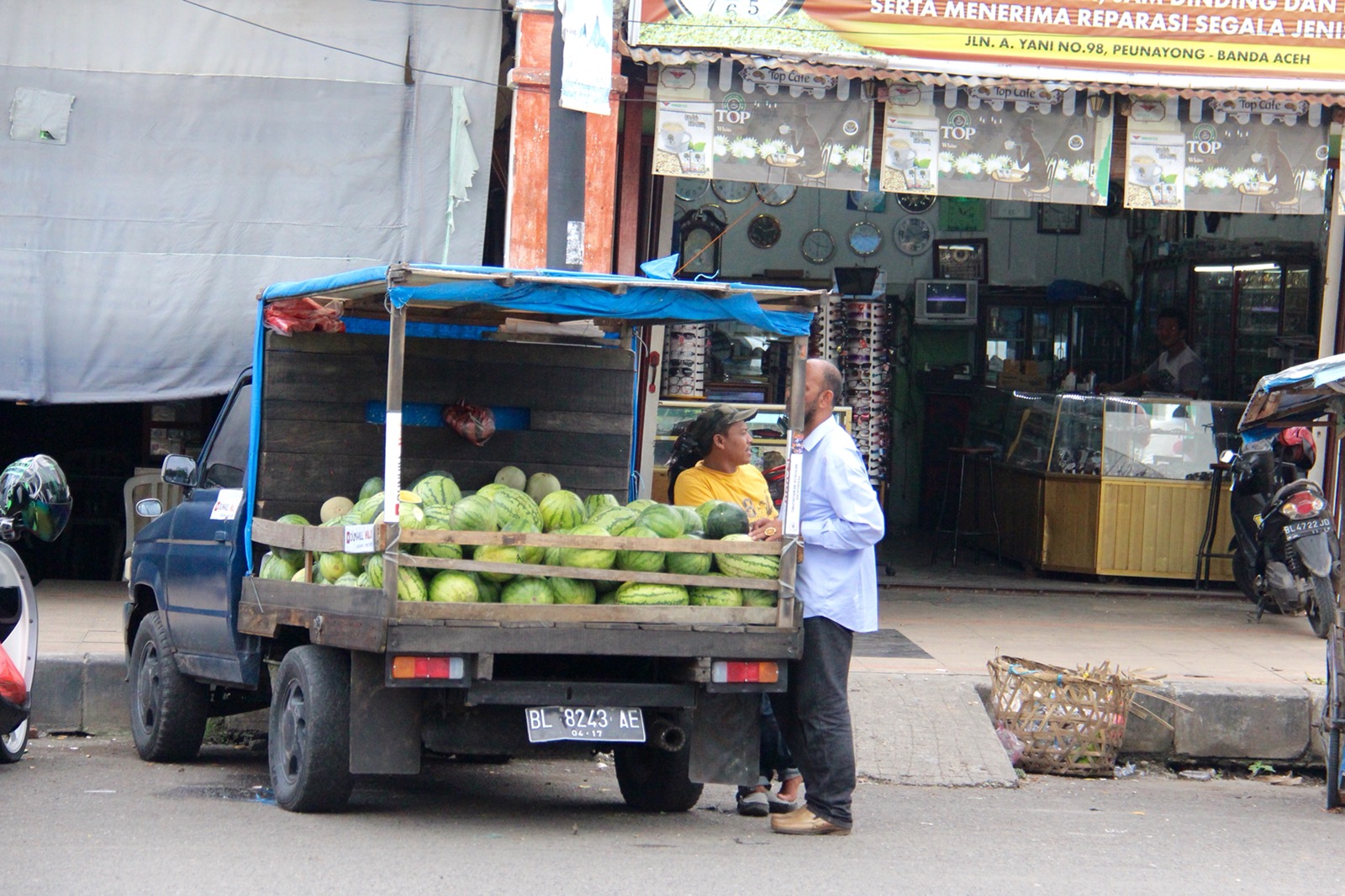 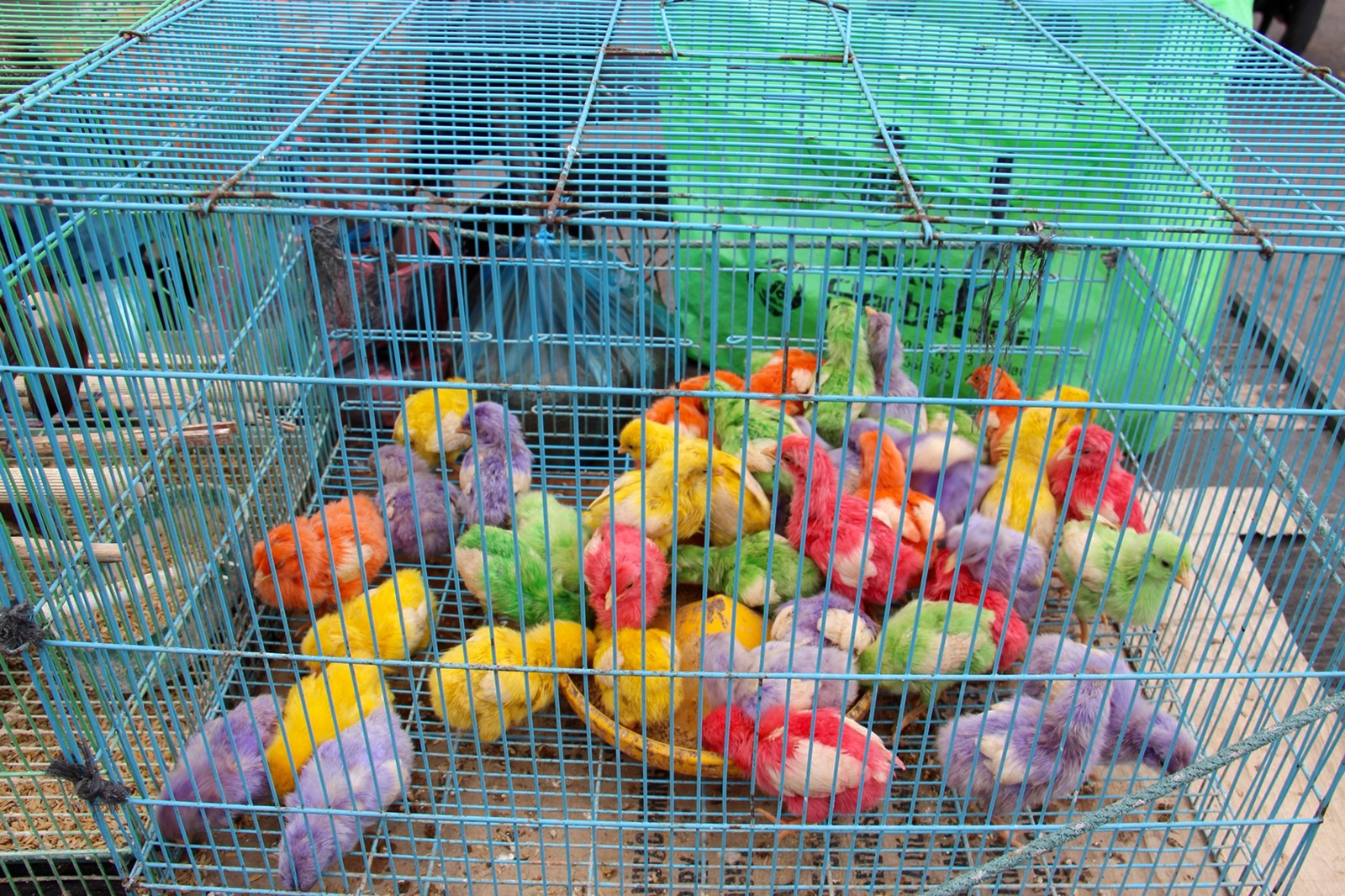 I headed back to the hotel after 2 hours of wandering around, and just as it started to thunder and pour with rain. Jackfruit is banned from the hotel (along with durian – understandable, it smells). But jackfruit?! It has a nice sweet smell, but nothing ridiculous. And mangosteen – why ban mangosteen?! Anyway, I ignored the jackfruit ban and enjoyed it in my room!!

You have to pull the edible pods away from the hard shell and the ‘pith’ parts. I don’t remember the pith being like glue last time I had it! But it was tasty.

The view from my room is nice, across the river and towards the main mosque and another couple of mosques. They were all sounding the call to prayer. And there was a lovely sunset, the sky turned orange and then purple.

I fancied a bit of dinner (even after all that jackfruit) and wanted to eat at the night market – right outside the front of the hotel, but it was surprisingly quiet. And only sold meat (chicken satay, bakso soup (meatballs) and various types of fried chicken and fish). So instead I found a really busy small local restaurant and ordered some tempeh and white rice. It was so delicious – especially as all tables have bottles of my favourite sauce – kecap manis! Not too bad at 72p! I had a really early night, up early tomorrow!