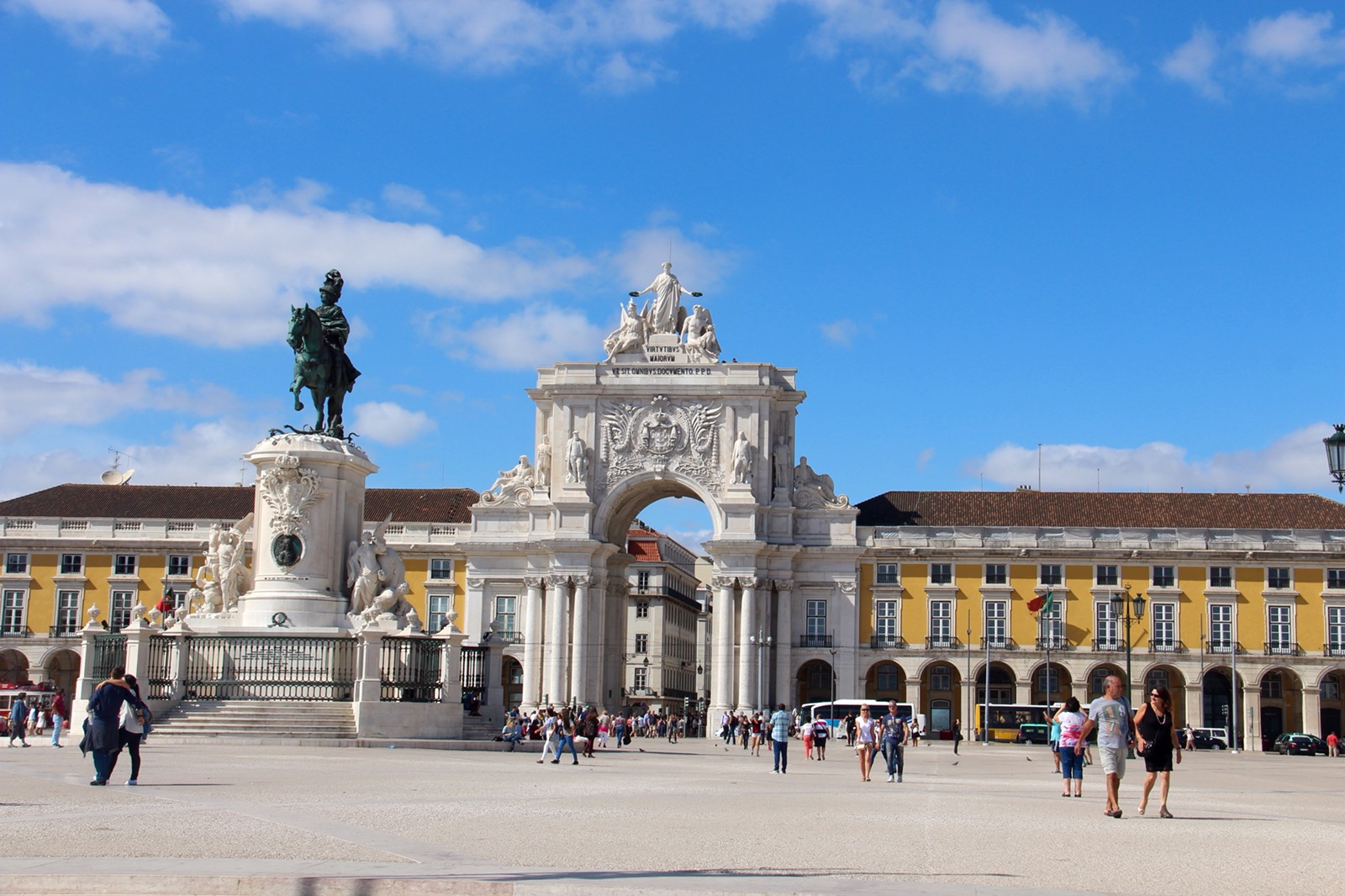 We headed off to Gatwick just after lunch. Our flight was on time and we were off to Lisbon!

Confusingly, Portugal is in the same time zone. So no change needed.

We landed about 8pm and after quite a lot of walking through a massive terminal, we found our way out! We bought a 24 hour metro ticket, then jumped on the next train. We had to change, which was simple. The whole journey took about 45 minutes.

We got off one stop early, so that we could walk through the town a bit. We ended up on one of the main shopping streets, but sadly the gelato plate that I wanted to bits was closed!

We are staying really central, just off the Praco do Comercio. We had an apartment – really nice and views out across a square towards the sea.

After some oats for breakfast (in our mini kitchen!), we went for a wander around. The plan was to catch a tram up to the castle. But we couldn’t find it.

So we wandered around all the streets of the Baixa area full of shops, cafes and people selling things. There were a couple of squares with pretty fountains. The area is laid out as a grid following an earthquake in 1755. This was the worlds first ever grid city! Then we found the tram!

And the queue, which was ridiculous!!

So we didn’t bother and decided to walk up instead. Initially there were sign posts, pointing upwards, up several flights of stairs, past pretty houses and circling upwards towards the top of the hill. We ended up on a ring road circling around the base of the castle. And it took ages to find the actual entrance!

At least we had nice views of the city, whilst we made our way around and around! 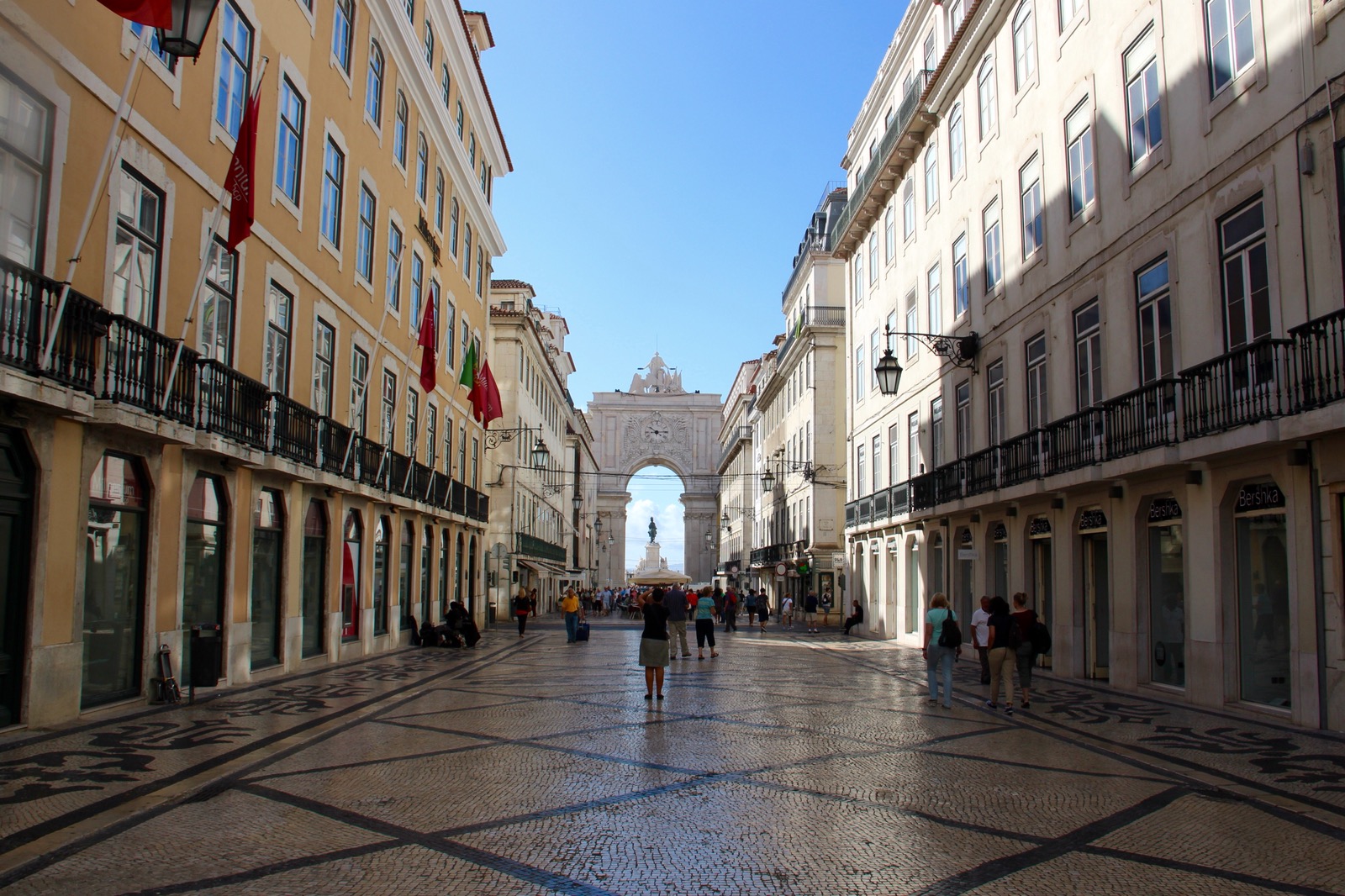 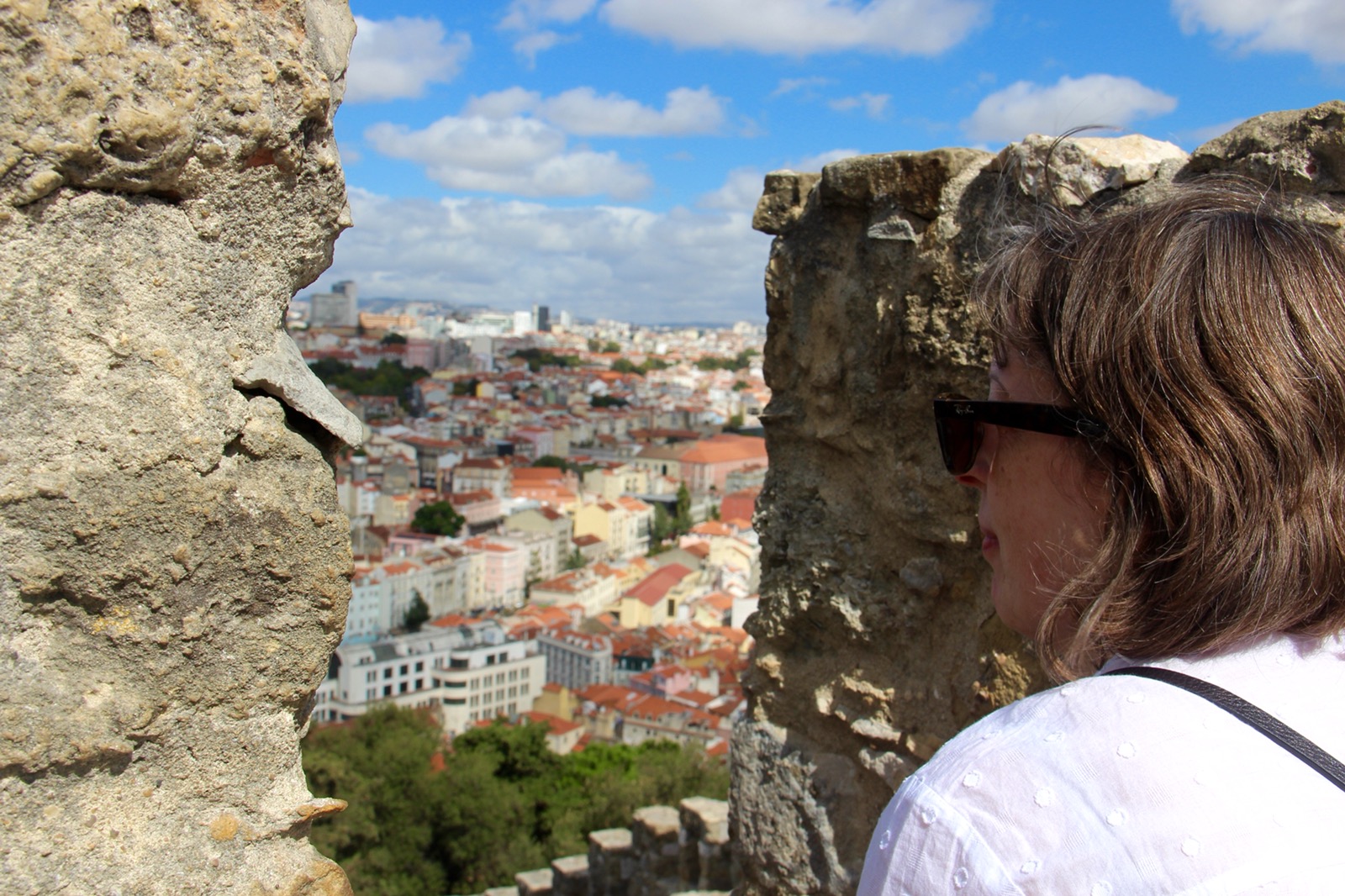 The Castelo was built in the 5the century and has witnessed many wars. Over the years it has fallen to ruins. Today, it is just empty stone walls. But has amazing views out across the city. It is surrounded by small gardens, full of peacocks!

We wandered around the edge, then made our way across the moat and drawbridge into the main castle. Here is it possible to climb up onto the walls and walk all the way around. It was a bit crowded up here – and there are no barriers in some places! After walking around the castle, we headed out via shops shops. 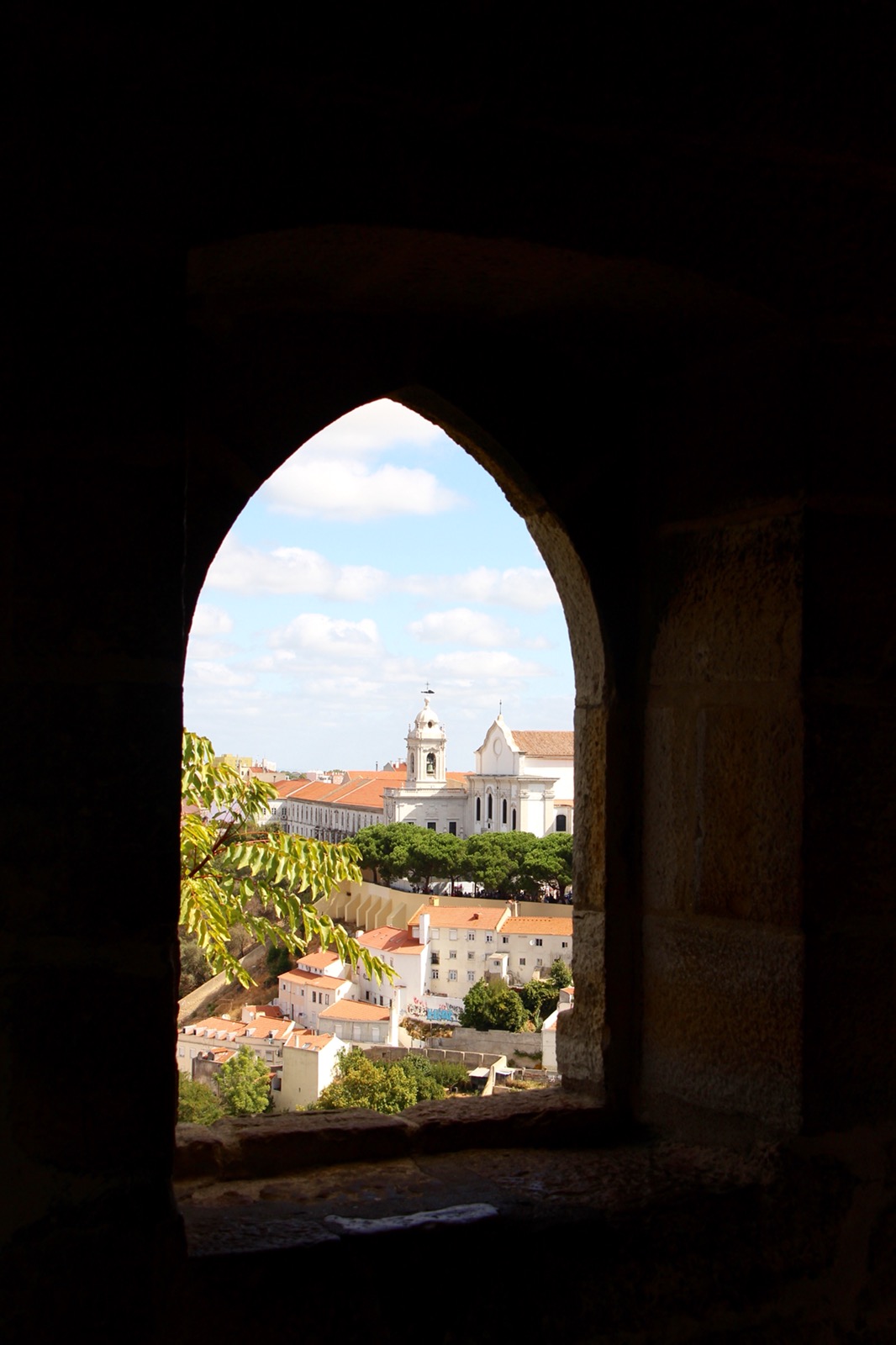 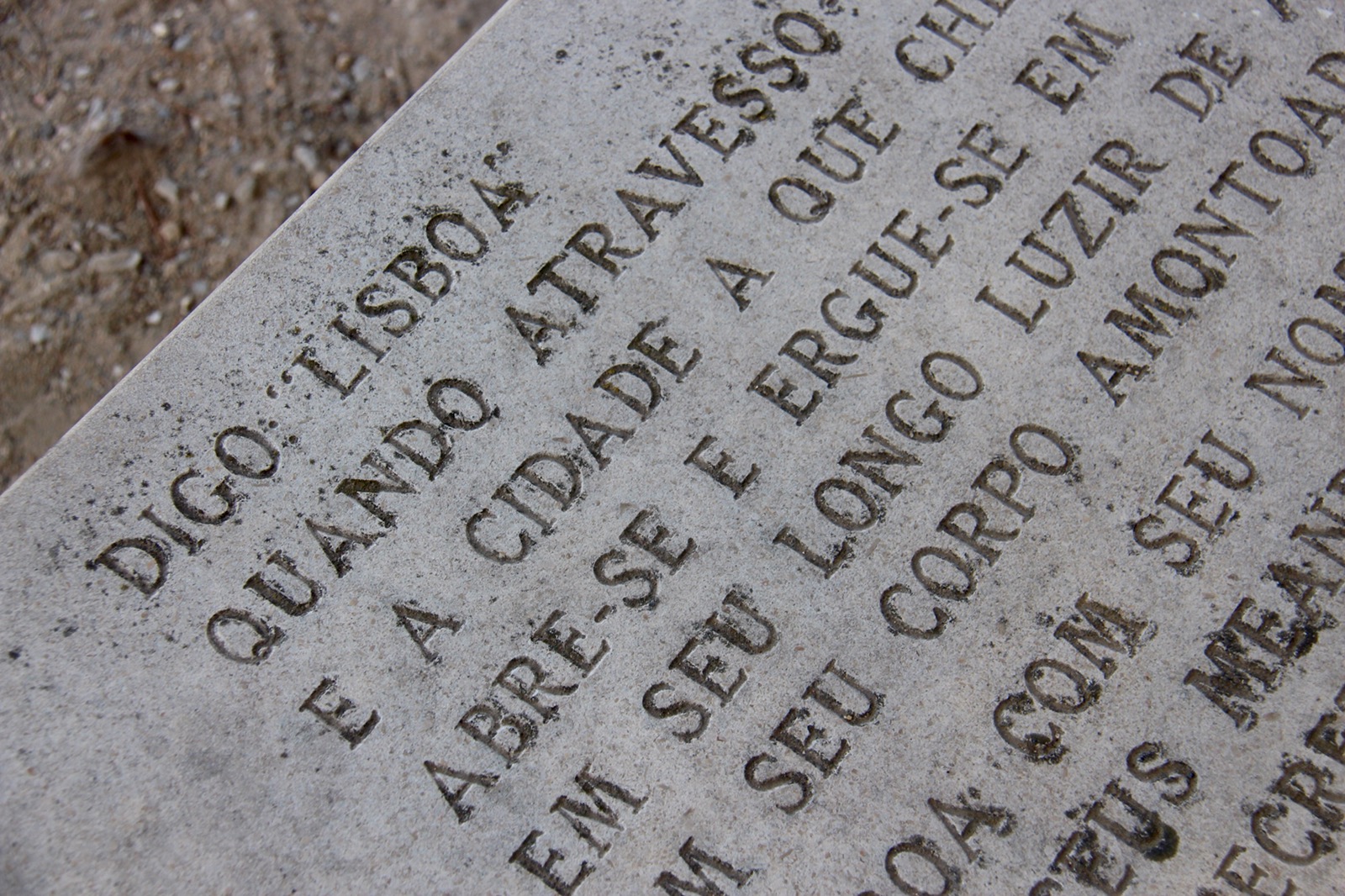 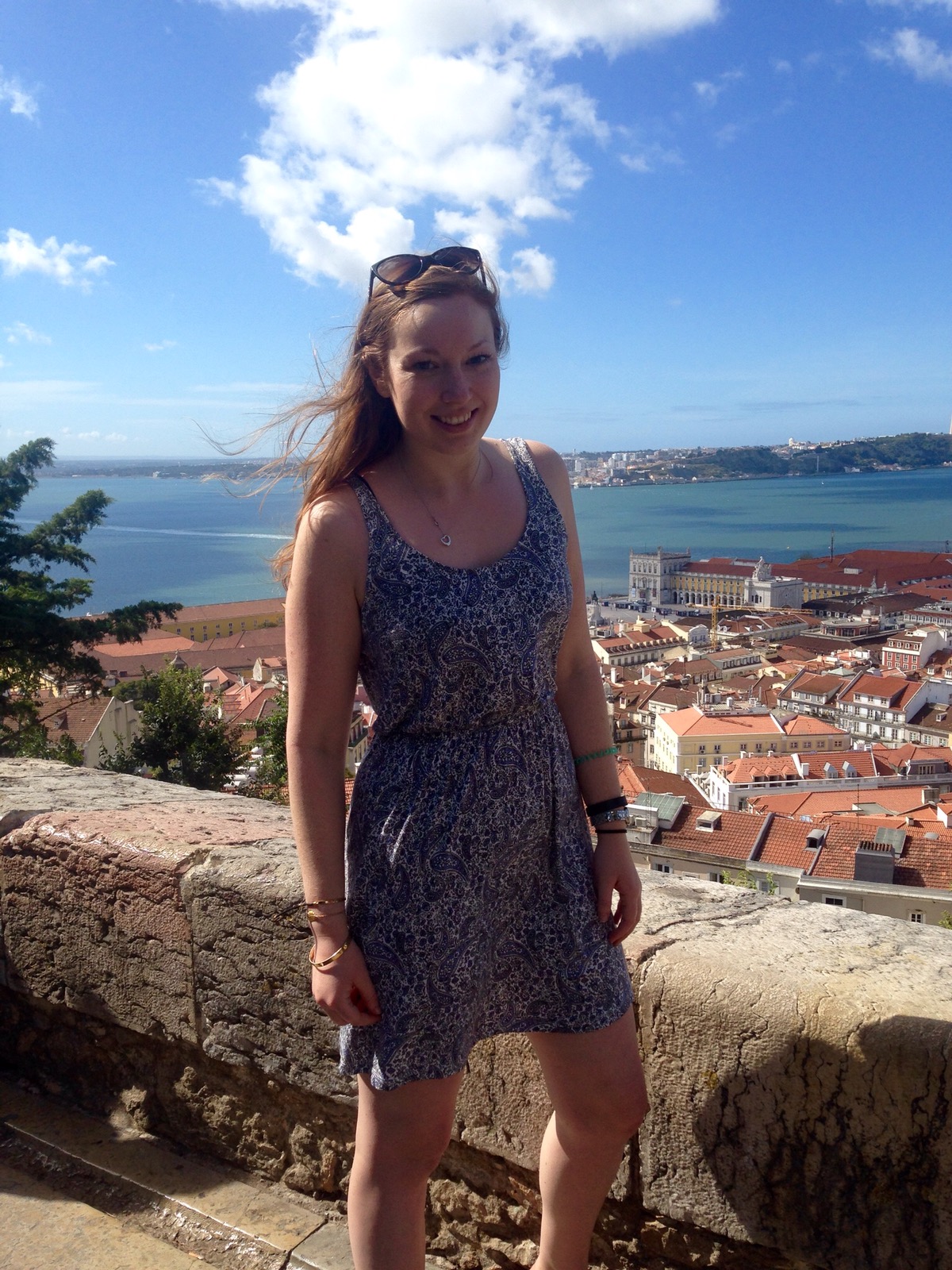 Just around the back of the castle were several vegan restaurants – amazing! We picked the one which I had read about. They do different dishes depending on the day. Today was a local vegetable stew. It was good. We also had nachos, lentil hummus and beetroot juice. And then cake afterwards. Because, well, cake! It was supposed to be a ginger caramel cake, it didn’t taste particularly gingery, but it was good. I was so full!

Rather than walk back down the hill, we decided to catch one of the mini trams, just for the sake of it! They are small and wooden, with just one carriage. We got a window seat – there are no windows, just holes in the side. And they were much quieter heading this direction, we didn’t even have to queue, we jumped straight on.

The tram took us along the narrow streets, past the Se cathedral and through the main city centre. Then we headed back up the hills on the western side of the city, through colourful streets and into a residential area. We considered getting off, but thought the tram would take us in a loop back to near the castle. Turns out it doesn’t.

We ended up miles and miles out of town in the middle of nowhere. Everyone else had thought the same.

But all you do is get off. Walk 10m to the next stop. The same tram drives those 10m and picks you all back up again. Totally pointless.

Apart from the fact you have to then pay again.

Luckily we had an unlimited use 24 hour ticket, so no need to pay again – but other people weren’t so lucky.

So back the way we came!! This time we got off in the Bairro neighbourhood.

This area is full of colourful, narrow streets of bars. Further up the streets was a look out point. There were views back across to the castle, where we had been this morning. It was quite far away!

All around the city many of the buildings are covered in colourful mosaics patterned tiles. Blues, greens, reds, all different patterns – so cool!

A bit more walking and we ended up on the sea front at the Praca do Comercio. This large yellow building is an 18th-century arcade. Now just s pretty building, full of stalls selling souvenirs! In front of it is a large open square with a mosaic floor. We went to sit by the water front for a while. Seagulls flying around. Some small boats coming into a small dock. And a massive cruise ship was leaving. 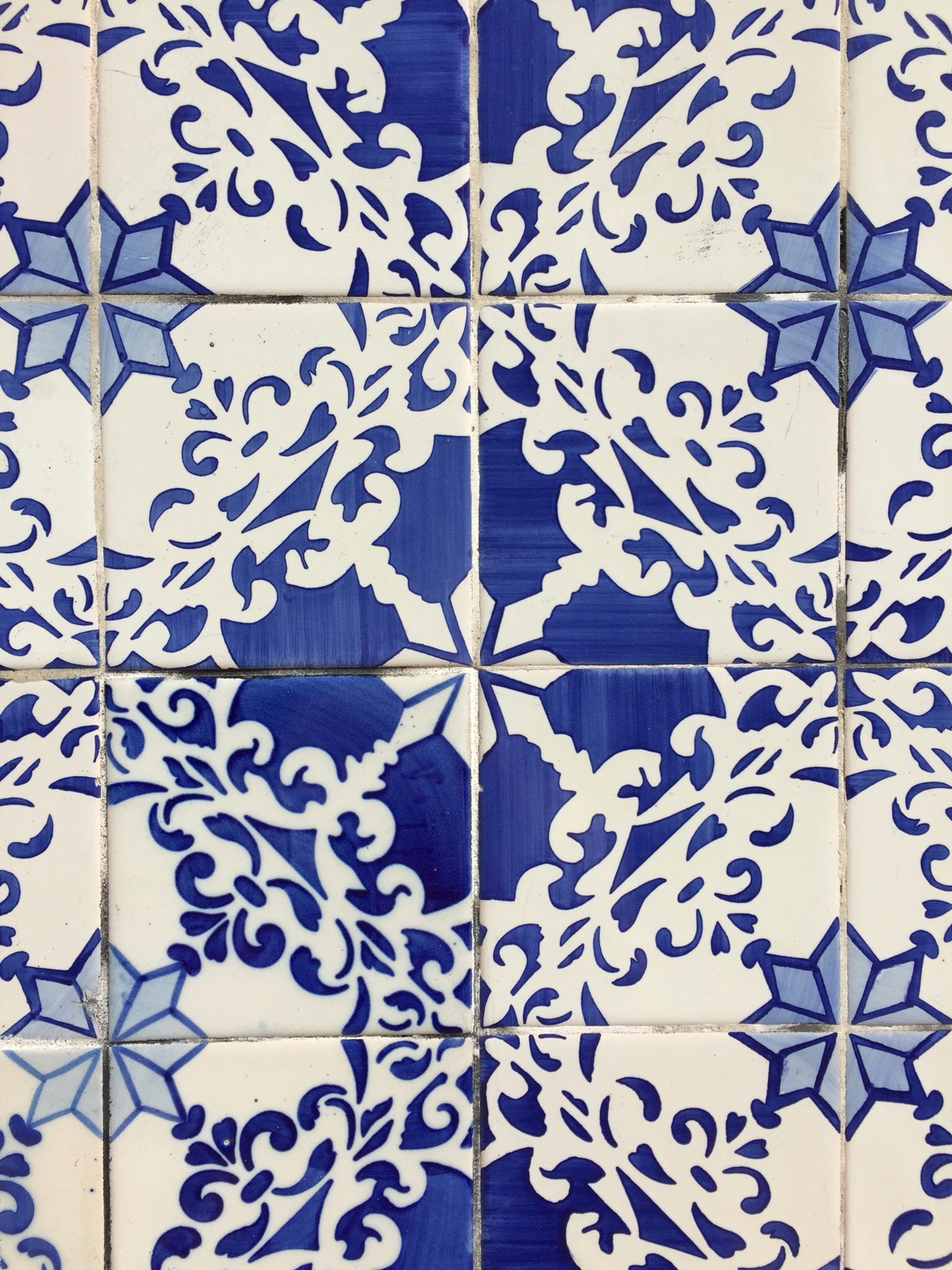 Then, what I’ve been waiting for all day – icecream!! And they have dairy free! So many flavours!! We got baobab (random!) and blackberry. So good. We were basically back at our room now, but headed up the hill behind to the Se.

The Se was built in 1150 on the site of a mosque soon after Christians recaptured the city from the Moors. We went inside, which wasn’t all that exciting. Some parts were free to wander around. It was much like a standard church.

For dinner we went to an Indian which was just around the corner. It was totally packed full of an Indian tour group! The food was really good, I had a chickpea curry – yum! And it was reasonably cheap. Although not particularly Portuguese! Afterwards, we went for a walk down the street, through some back alleys and ended up by the Se. There was an icecream shop – we got some Pineapple and mint sorbet – was good!

We had a bit of a lazy morning, leaving at 10am. We topped up our travel cards with another 24 hour unlimited ticket, then headed off to the Praco do Comercio.

We had seen trams here yesterday heading towards Belem. There was a bit of a queue. Which we joined. No trams came.

City mapper informed me that they were supposed to be every 15 minutes. It had been at least half an hour. Then one came! Very few people fit on. We didn’t. We waited. And waited. This was getting ridiculous.

After just over an hour, we gave up. There was supposed to be a bus also, and the stop was just around the corner. So we gave that a go.

A few minutes later, one arrived and we were off! Thank goodness. What a waste of time!!

It took about 40 minutes to make our way along the coast, west 6km, to Belem.

The first thing we saw here was the towering Mosteiro dos Jerónimos a Unesco-listed monastery. It was built in 1498 and used to house sailors on their way to India. But was later used as a school. Above the main entrance was stone with elaborate carvings – gargoyles and other creatures. The rest of the building was equally elaborate, carved stone running the length of the long walls. But it was closed. So we just admired from the outside.

Through some gardens and we ended up on the seafront.

Well. River front. But it felt like the sea!

It was really windy.

We walked all the way along to the World Heritage–listed fortress, Torre de Belém. It was a surprisingly long way! Here there was a massive queue to go inside, so we didn’t bother. We just sat and looked at it. It was cool – like a large chess castle piece

The tower was built on the banks of the Rio Tejo in 1515 in order to guard Lisbon harbour. After a while, we made our way back to the monastery area. And now it was open! And free! So we went in to have a look. The only part which was open was a large cathedral part. It was dark inside, many large tall columns. But again, much like most cathedrals!

This area is famous for its “pastéis de nata”, custard tarts. And one place in particular – Antiga Confeitaria de Belém – has been baking these since 1837. There was a long queue outside, but it moved pretty quickly. I bought a box to take home. Although they were expensive at EUR2 each. (And not vegan, so I didn’t try them)

We caught the bus back to the main city and had about an hour to do nothing before it was time to head back to the airport. At 3pm we made our way back to the airport on the metro. And in typical fashion, it began to rain. But once we were on the train, we didn’t need to go outside again. Our flight was at 6pm. Back to London for a few weeks.