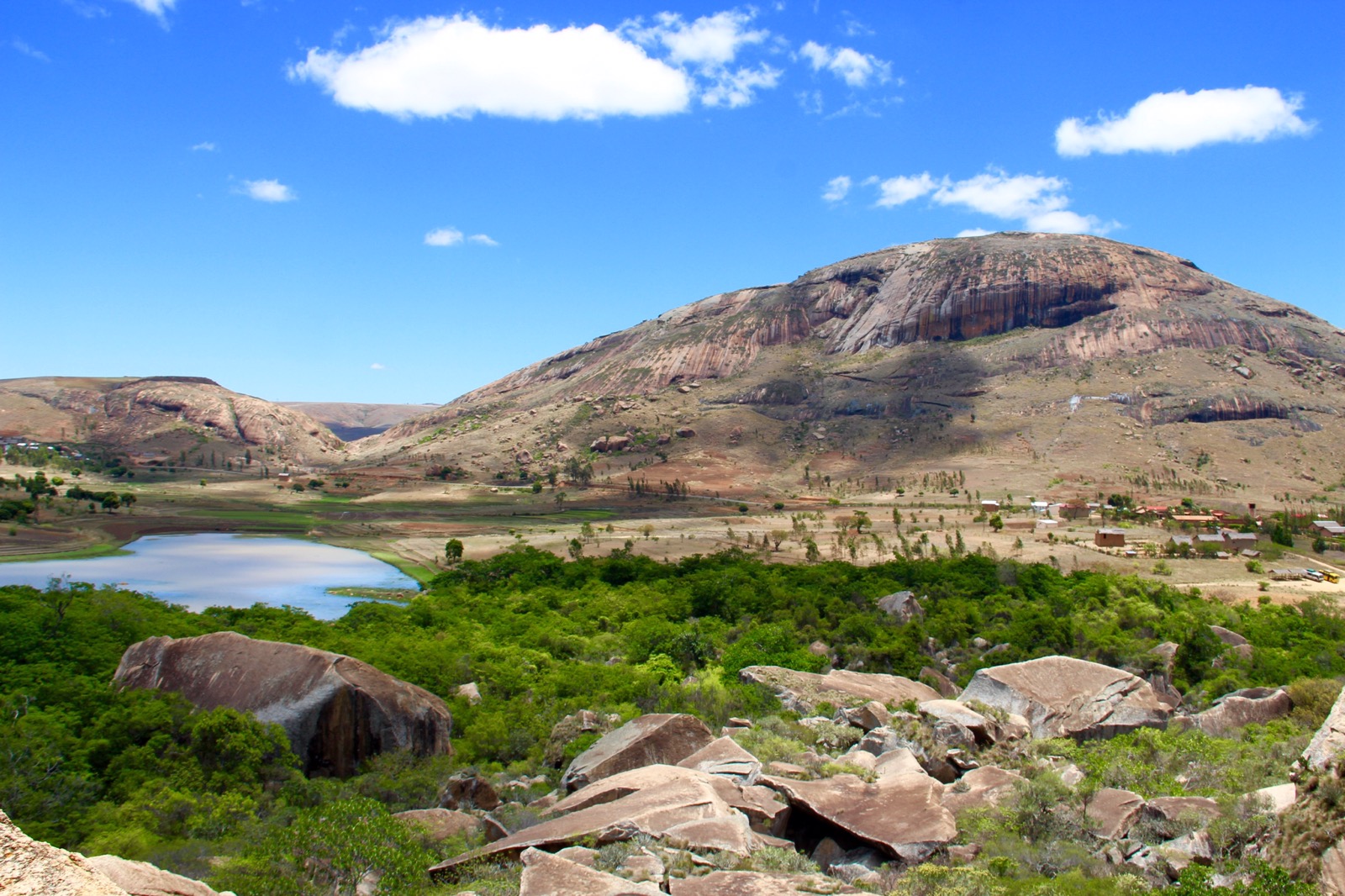 We had a bit of a lazy morning today, not starting until 8.30am.

Just outside of the hotel was a small paper factory. We were shown around. They pick small branches from the tree, soak them and then hit them with mallets until they turn into mush. This mush is then added to a large amount of water and laid out on long pallets and dried. Once dried, this is paper!

They add various flowers to the paper as decoration, or stick bits of tree bark onto it to make a pattern. I’m not sure what purpose the paper has, other than for souvenir making. But traditionally it was used for various things including books. 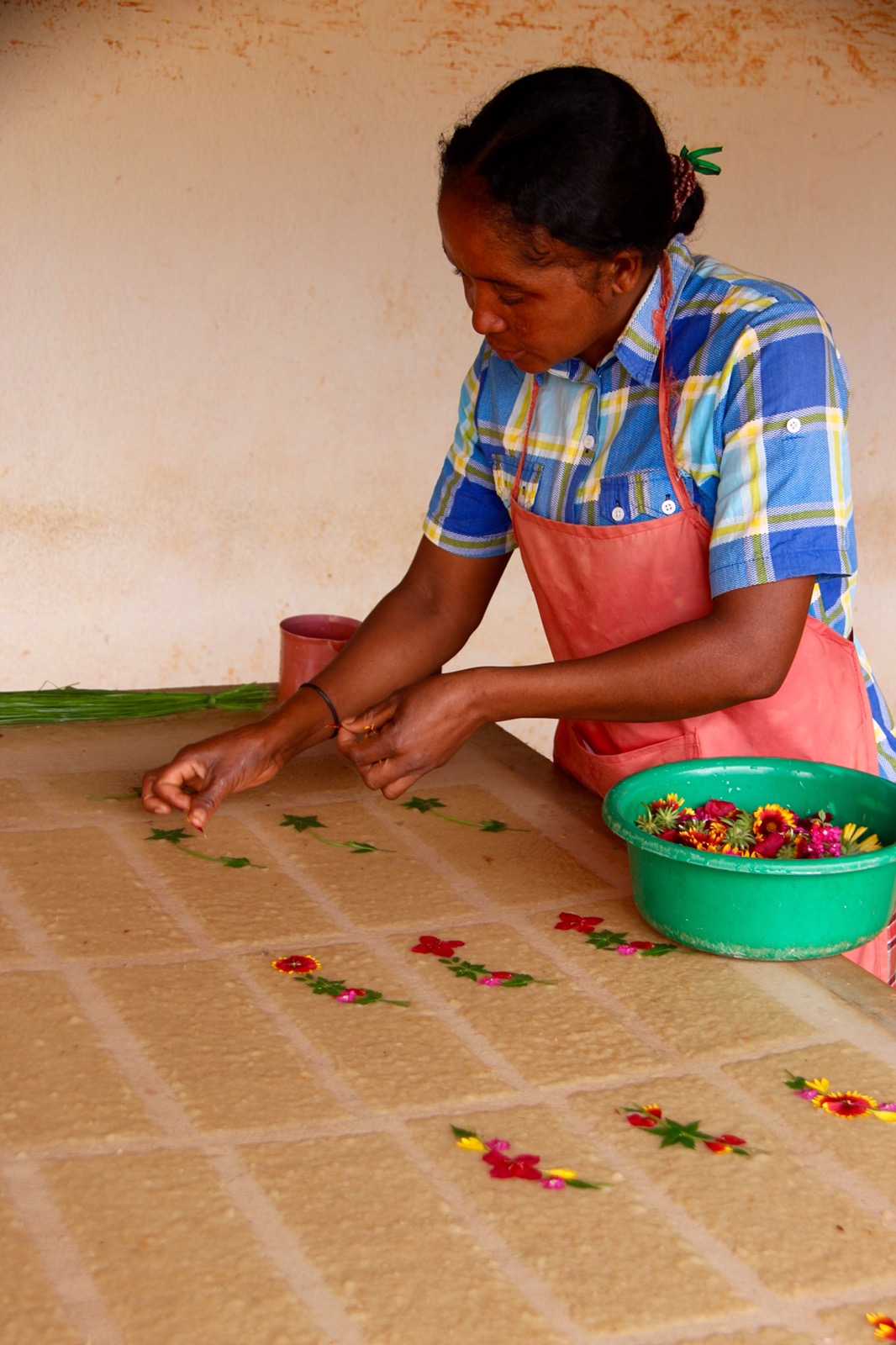 Just down the road was a silk factory. They had trays of caterpillars, feeding on leaves. These caterpillar’s cocoons are a small ball of silk. Each ball was only the size of a malteaser, but contains 1km of thread!

They leave these cocoons out in the sun to kill the insect inside, so it doesn’t turn into a butterfly. The balls are cooked in soapy water for 1 day, then hand rolled into thread. The thread is then weaved. Traditionally this is how shrouds are made for wrapping corpses.

Once we were finished visiting the workshops, we headed off in the bus into the countryside. Like yesterday, the landscape has totally changed. We were into a rocky scape, much like Matopos in Zimbabwe.

It was wide open, dry and hot. A complete contrast to previous days. 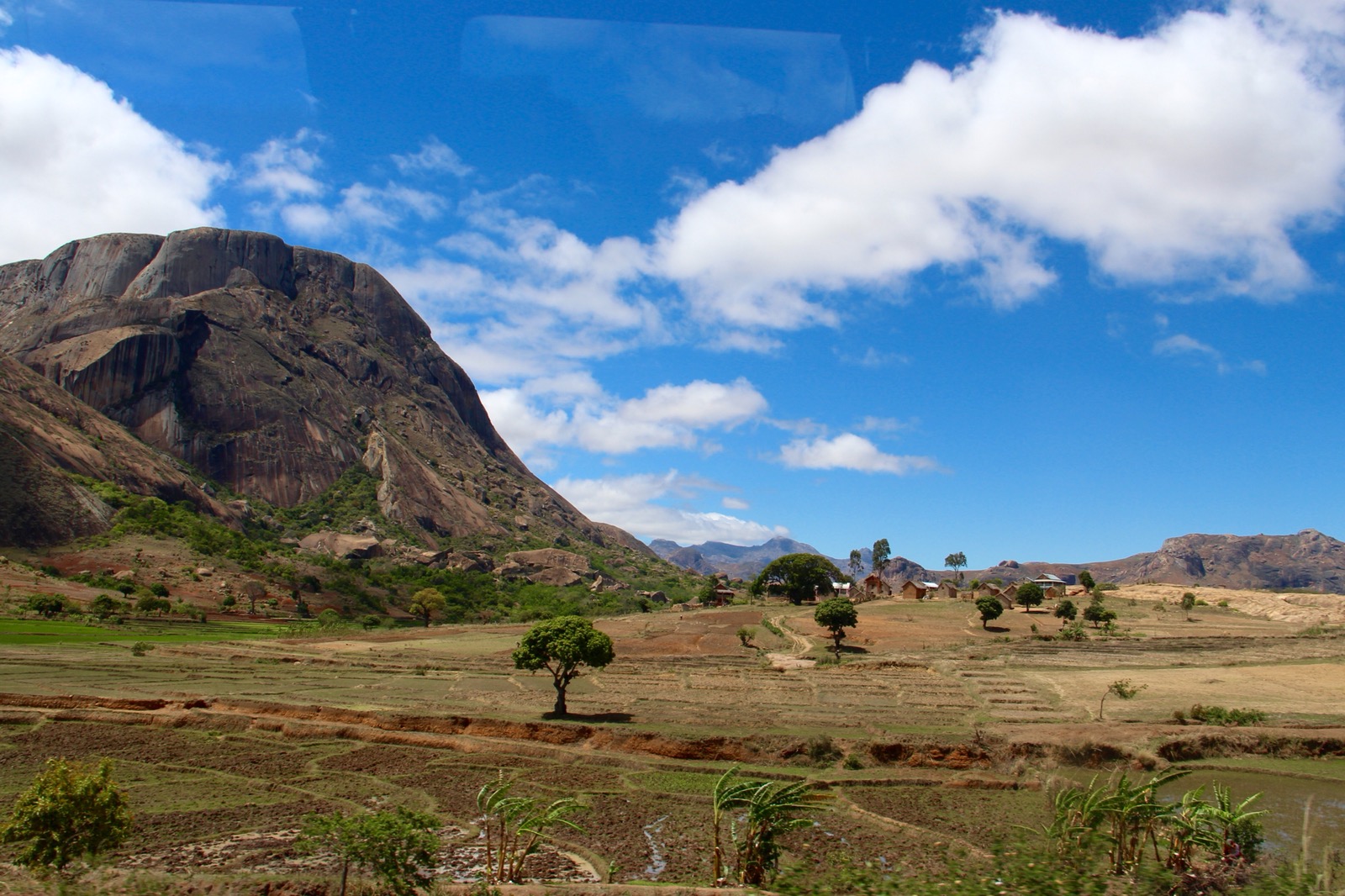 Next up – perhaps the thing Madagascar is most well known for. And probably the reason I am here. Ring tailed lemurs!

We stopped off at Anja Community Reserve. This is an area of land which has been purchased by a coop of people to protect the area (and the lemurs). We had a guide to take us around, we were into forest straight away.

We saw some cool things – several chameleon, some large and one very small (about 2 inches long!). They showed us sekada sitting together on a tree, they looked like pink petals dotted across several branches – they were cool!

We ended up by a large lake, a bright blue kingfisher sitting on the edge. A small snake just under a tree – and suddenly it caught a frog! The frog blew itself up with air to stop itself being eaten. But it failed, over the next 10 minutes, the snake gradually swallowed the whole frog. Yuck.

Then just up in the tree above us – two ring tailed lemurs!! They were so fluffy and cute!! 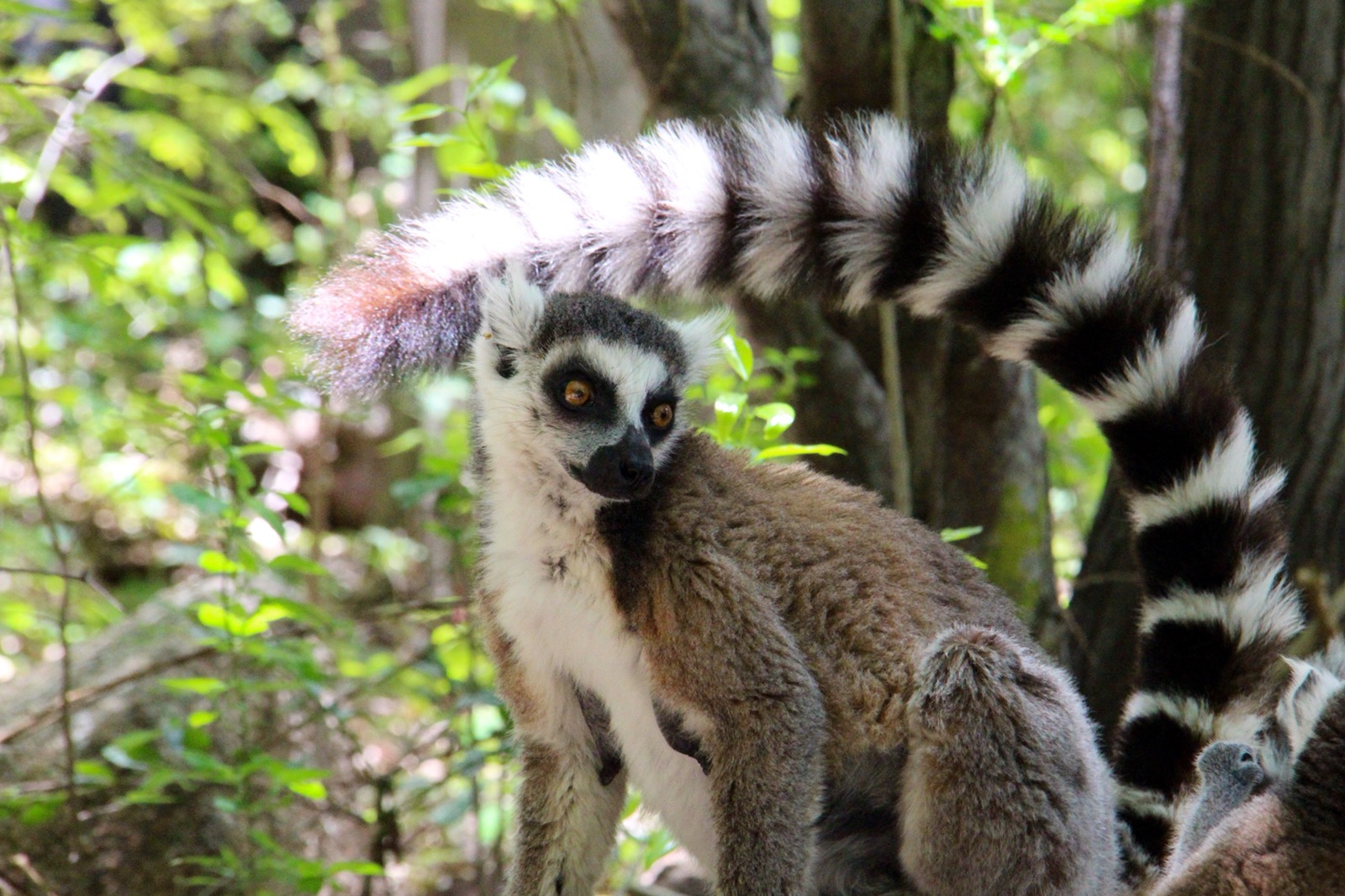 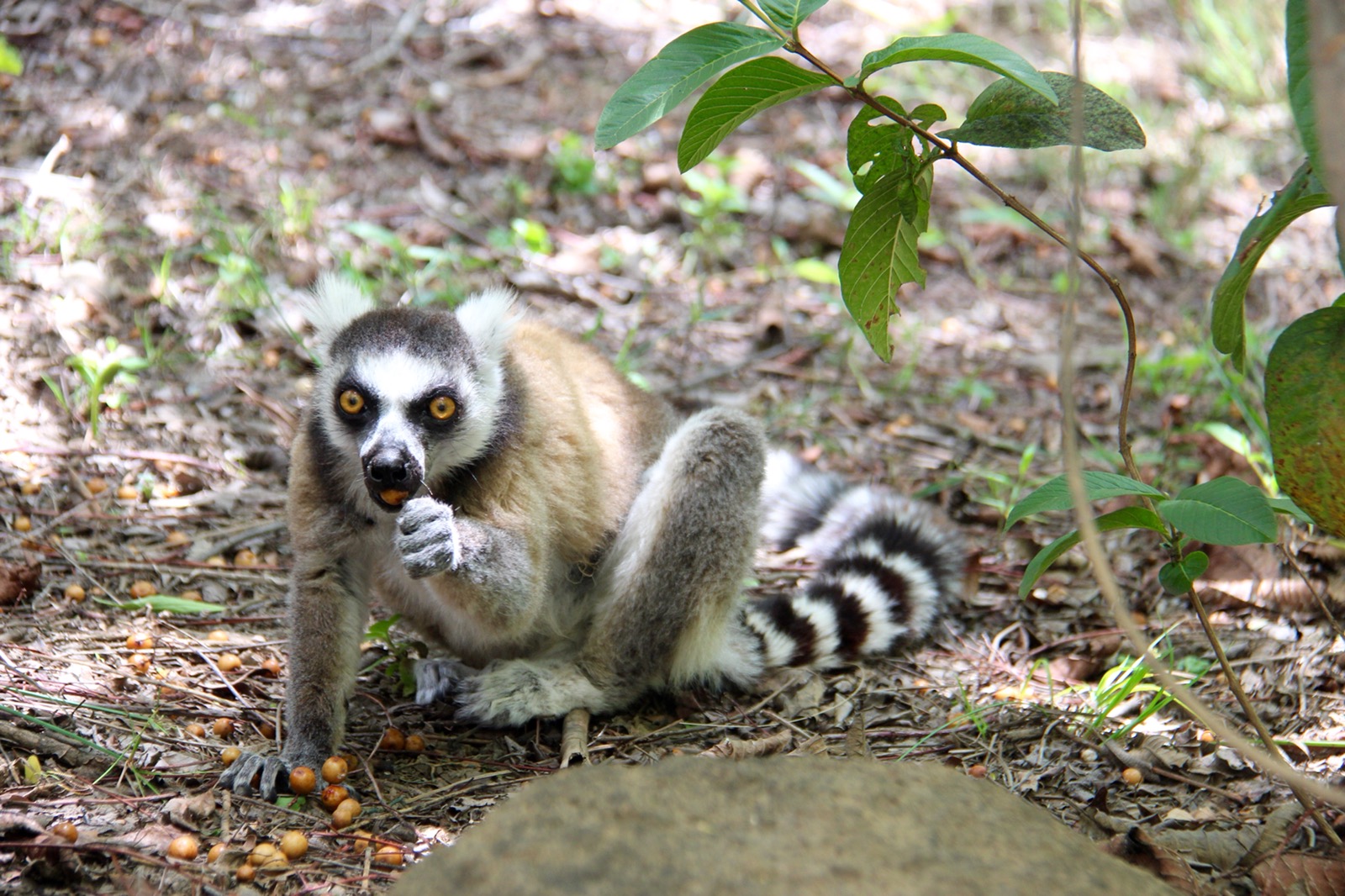 They were squeaking as they ran around the branches just above us. A bit further along, one more was picking up berries from the ground and we got quite close. And just around the corner, a whole family!!!

There were at least 6 babies plus 8-10 adults. The adults were mostly sleeping, the babies running around all over the place. They are all 2 months old. Many of them were twins too. After a while of standing watching them, they gradually came out of the tree onto the ground right next to us. Picking at berries and jumping around.

Some of the babies were riding on the backs of their mother – so cute! We spent ages watching them. After several hundreds of photos later, we headed off for an adventure around the rocks.

It started with an easy scramble over medium sized rocks. Then we were faced with a massive rock face. And a rope. We had to pull ourselves up the side of the rock. I was convinced I was going to fall. But actually it was fine. My shoes are grippier than I thought! The views from the top were great – all around the park area, massive mountains of rocks behind us, flat grasslands and lakes out infront.

We stayed up on the rock for a while, before descending down the other side. Also requiring ropes! Then clambering over more rocks before we were back in the forest area.

A couple of hours had passed when we got back to the bus and it was lunchtime! More jackfruit for me – nearly finished it! And now a long drive further South. After a few hours, the rocks gave way to a large flat Savannah. And we moved into a different tribe area – these people looked African. And the whole place finally felt like I was no longer in Asia, but back in Africa!

These flat grasslands are used for zebu farming. They burn the grass every couple of months in order to grow fresh small new grass shoots – this is what the zebu eat. Miles and miles and miles of flat grass. It’s funny how quickly the landscape changes here – in just a couple of days we’ve been in rainforest, cities, rice paddies, rocky forest and grasslands.

Just two roads, littered with stalls selling things fried in oil (mostly meat or cassava), shops selling biscuits and fruit, and eventually some fruit! Although not much. I found some mangos and bought 4 – I had no idea how much they should cost, so tried giving the girl 5,000 (£1). She looked confused and rifled through my money and took 1,000 (20p!). So cheap! She could have totally ripped me off, so that was nice of her.

A bit more wandering around and we found some zebu carts! We basically ended up in someone’s yard, taking photos of their cows…! As we were wandering back, there was an amazing sunset across the horizon. We clambered into someone’s front garden for a better view! Pink streaks across the sky, through the shadows of the trees.

Dinner was interesting. There was nothing I could eat on the menu. So I ordered off menu. I ordered vegetables, no onion, no garlic, no egg. And I got presented with a massive plate of onion with an egg on top. Ridiculous. The guide sorted it out and I was then brought a plate of tomatoes, followed by a plate of plain overcooked green beans and carrots. Exciting…. I’m getting really bored of the food here. It’s so rubbish. But it’s cheap, at 80p a plate. But by 9pm it was bed time. 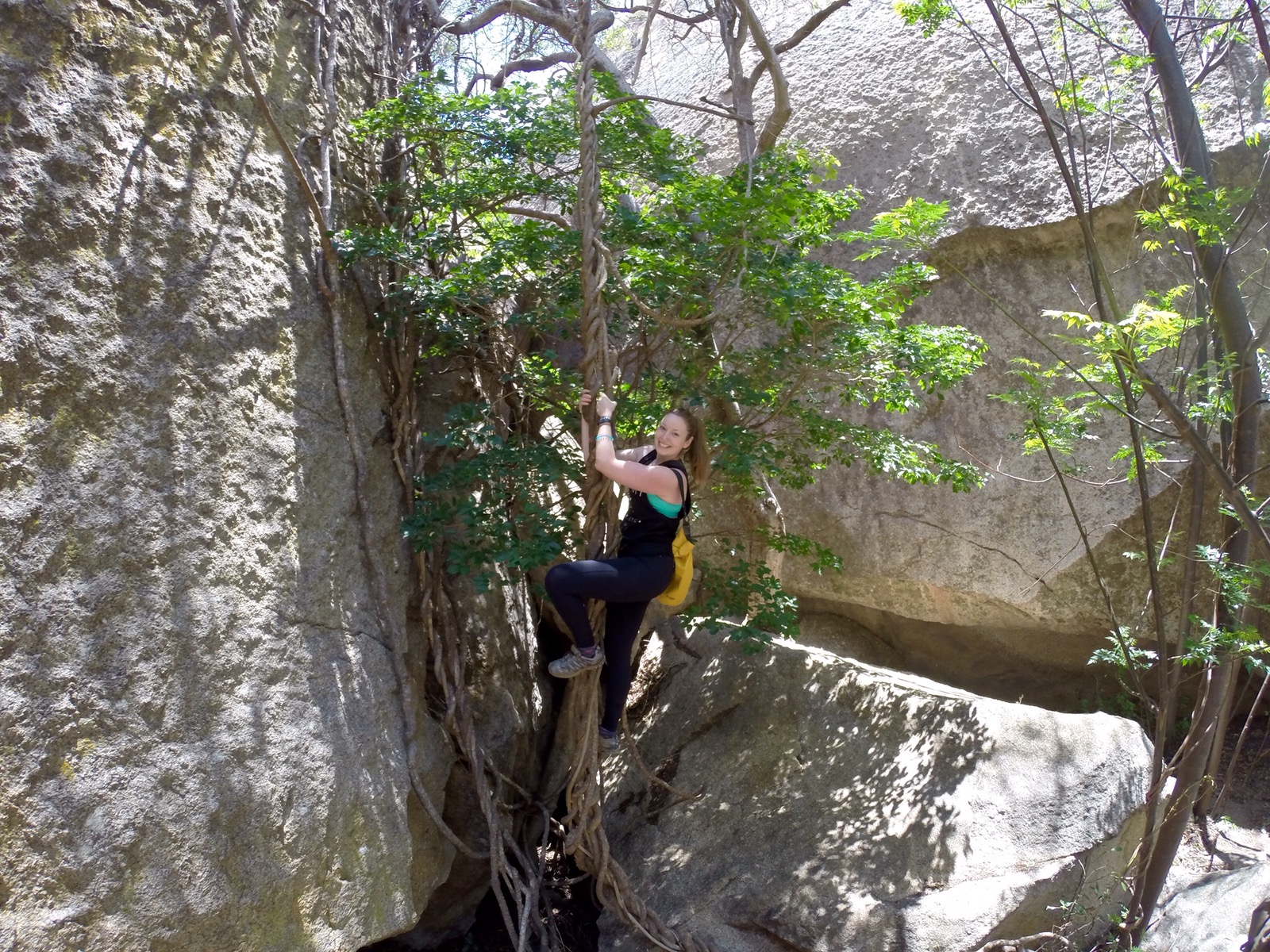 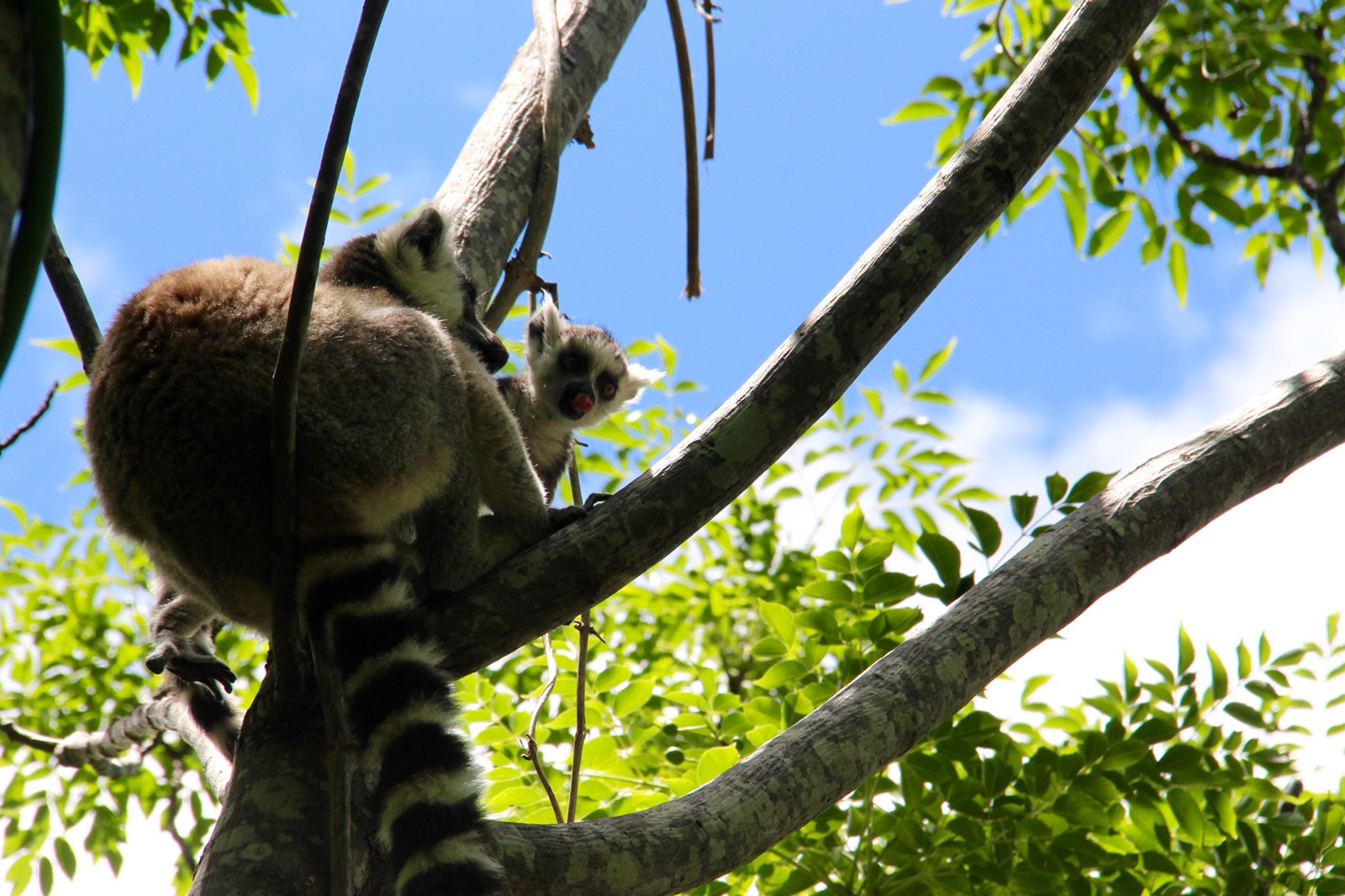 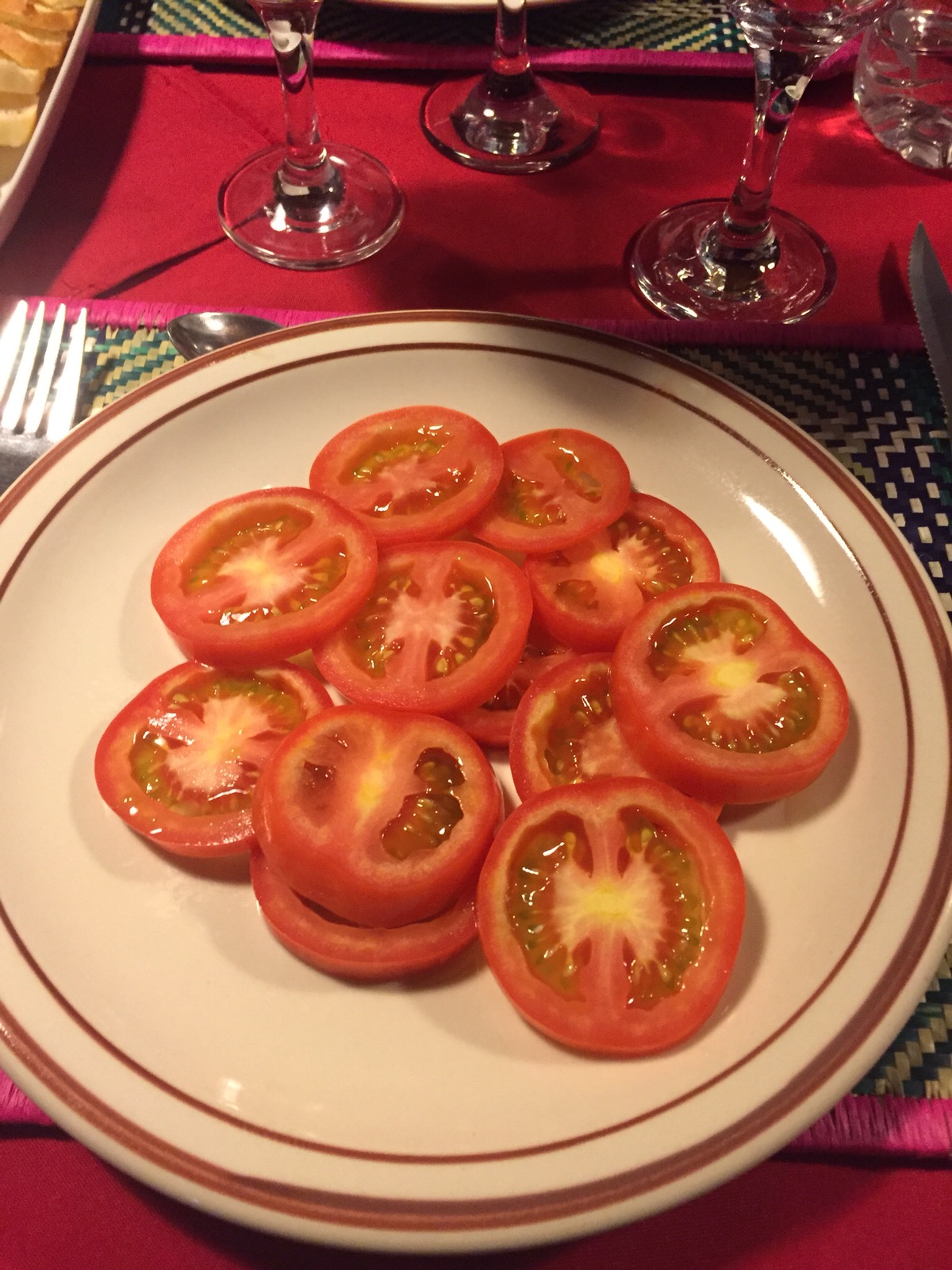 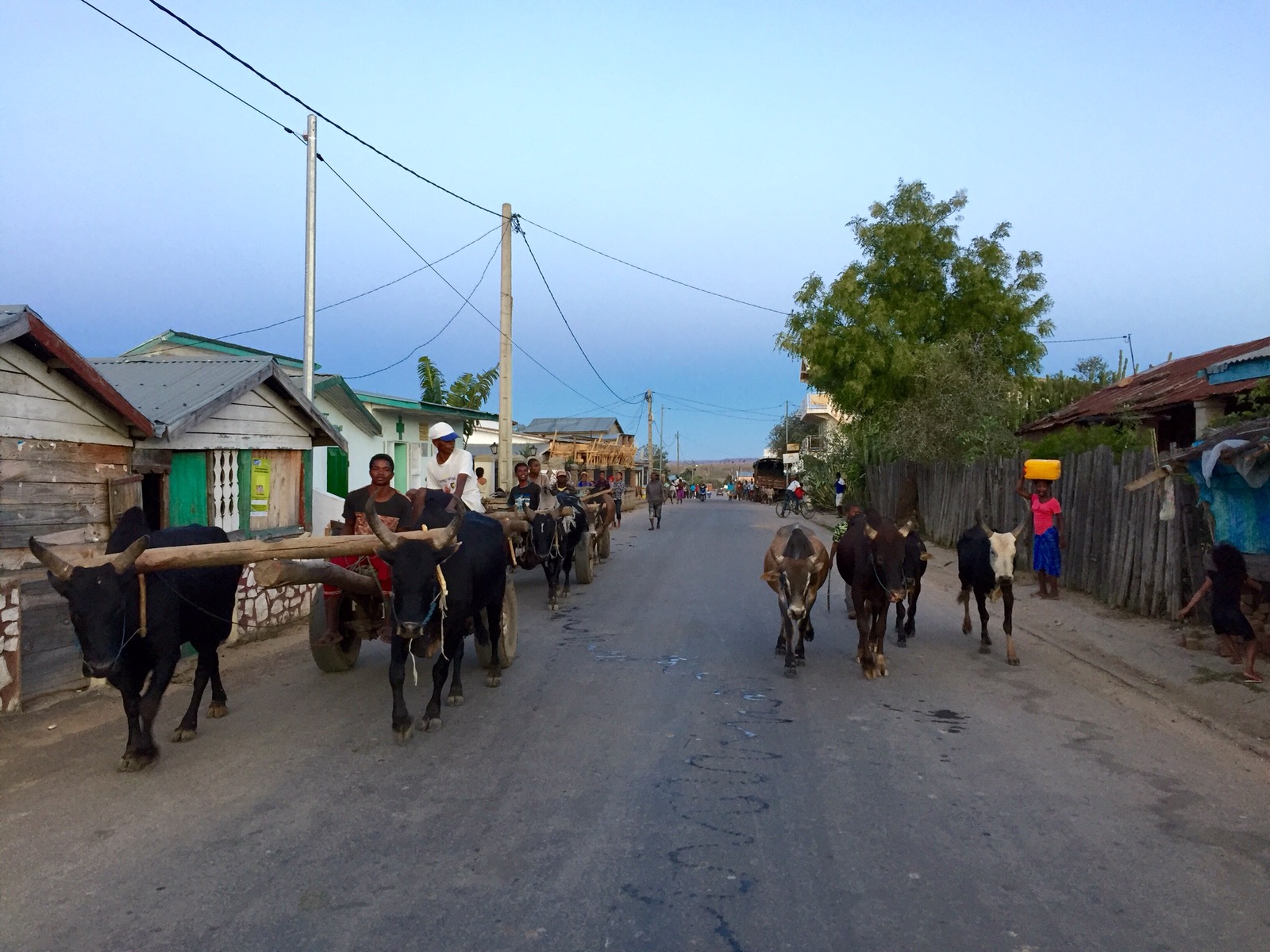