I always think that booking early morning flights is a good idea at the time.

But the day before when I realise I need to be up at something with a 4 in it, less so.

Given my body still appears to have no idea what time of day it is, I was up at 4am anyway, so had plenty of time to get ready for my 5am taxi to Gimpo. I was surprised to find the owners of the guesthouse up and waiting for me at 4.50am, but only to tell me the taxi had cancelled. Great.

But they ran outside to flag one down on the street for me – how nice of them! I was dreading the taxi ride – I hate taxis. If they turn up, they almost always try to rip me off. It took about half an hour to drive through the surprisingly busy city (why are so many people up and about at 5am?!) and the taxi woman was so nice. She even gave me a sweet. Didn’t rip me off! And it was cheaper than I had expected (23k won – £14).

The airport was chaotic. A fairly long queue to drop bags. I’m off to an island at the South of the country – Jeju. There are several airlines that fly and flights run literally every 5 minutes (there are about 15 an hour). Like buses!

Security was very quick and efficient and the airport was just one large waiting space. With a 7-11. Which was also rammed. I bought some snacks for later – inari pockets, a onigiri triangle, banana chips and some ‘Charlotte’ chocolate! And laughed at some of the funny things they sell – strawberries and cream sandwiches, and sweet potato sweets being some of them.

Boarding was confusing. My gate was being used for 4 flights before mine – and mine supposedly left in about 40 minutes..! But actually it was well organised and despite nothing being in English, was fairly easy (I waited until people with a similar colour boarding pass to mine were queuing!).

The flight left on time at 7am for the hour flight south.

Jeju is Korea’s largest island and was once a colony of Japan. It was voted one of the New 7 Wonders of Nature back in 2011 (I’ll admit, I hadn’t heard of it before that vote! And I only have one more left to visit – Iguazu). As we flew towards the island, the peak of Mount Halla (the highest peak in South Korea) was spread out above the clouds. It was pretty – as the sun hasn’t long come up, the sky was still slightly orange.

It seemed incredibly difficult to get around the island yourself, without a car, so I’m joining some day trips for the next couple of days. Today, they are picking me up at the airport – how convenient!

After collecting my bag (from the carousel which had a stone statue mouth painted onto the flaps the luggage come out of), I had a 45 minute wait until I was being picked up for a day trip around the island. I was a bit hungry and ended up eating the iniari…whoops – but they were so good!

I was picked up at 9.20am and we headed off out of Jeju City, to the western side of the island. First stop was Hallam park. Here are three sets of old lava tunnels – called Hyeopjae and Ssangyong, which are part of a larger, 17km-long lava-tube system and are said to be the only such caves in the world to contain both stalagmites and stalactites. 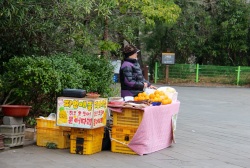 They were cool – you could see the line of lava, various rock shapes and a few small stalactites. Around the tunnels, they have build a rather theme park style garden area. Some parts were pretty, but others a bit tacky. There were daffodils, hydrangeas and tulips everywhere. And a pretty lake.

There was a small area of little statues of rock people, which were cute. This island is full of them – made of volcanic lava rock – known as rock grandfathers.

A bit more of a drive and we ended up on the Western point of Jeju – Suweolbong, a UNESCO world heritage site. Apparently we were going ‘trekking’. This ‘trek’ was a 1km walk along a concrete path along the edge of the ocean…more of a gentle stroll then…! It was pretty, bright blue ocean bordered by a black volcanic rocky shoreline. There were a couple of small islands just offshore, covered in grass.

At the end of the walk was some farmland – one of the fields full of brussel sprouts – one of my favs! Never seen them growing before. And some rice fields. This land is very fertile and the only area in Jeju that it is possible to grow rice.

Next up – lunch. We went to a local Korean buffet. It’s on a small farm where they grow all the vegetables themselves and they also have a bonsai garden. I wasn’t expecting much from lunch, but the vegetable selection was incredible!! I had rice, spinach, sweet corn, bean sprouts, kimchi, other green leaves and a curry sauce. Each vegetable was marinated in a different spicy sauce – all so good!

After lunch, I wandered around the bonsai garden. Never seen so many small trees in pots. It was ok – as far as small trees in pots go. The weather has been gradually turning from bright, sunny and hot, to cloudy and chilly – bit of a shame. Even looks like rain….

We stopped off for a quick photo stop, in the middle of a load of cabbage fields to look at the old Japanese airbase from the Second World War. They hid planes in small bunkers across the fields – some of which are still there today. In the background was Mount Sanbang, a dome shaped lava mountain. Here there were some Buddhist temples, and 500 steps up the side of the mountain was a small cave with a Buddha inside. The views out across the ocean were nice.

The final stop of the day was in the Jungmun resort area on the South coast. We had the choice of visiting a waterfall. Or a teddy bear museum. Who would want to go to a teddy bear museum?! Seriously…! Although this is kind of what they have turned Jeju into – all of the natural attractions have been turned into a tourist theme park.

The Cheonjeyeon waterfall was nice – there were quite a few steps to get to it. And you could also walk upstream to a small pool of water, this was the best part. The water was so clear, the pool moved from clear, to green to blue – so pretty. 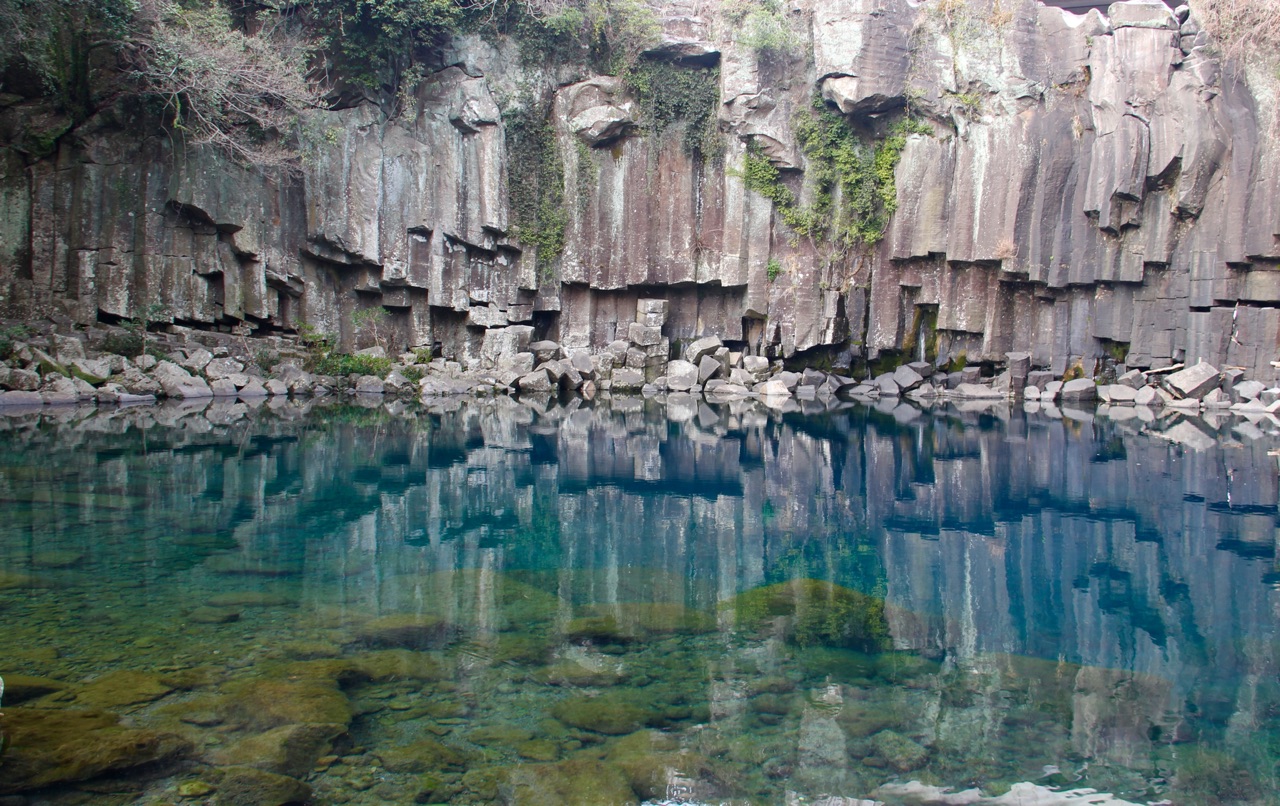 From here, it took about an hour to drive back to Jeju City.

I’m staying at a hotel in the city and am super tired. There didn’t seem to be any food options around (and I was not up to sitting anywhere!) so bought some soy milk, rice bread (looked sweet, didn’t taste as good as it looked!) and a red bean donut. And went to bed very early.

I managed a whole night sleep! First time since I’ve been away! The hotel had a free breakfast – I had some rice, sweet chilli noodles and some cooked nuts which were quite similar to peanuts. A bit random! But I found out afterwards that they grow these peanuts on an island just off the main coast of Jeju.

Today I’m joining another day trip – this time to the eastern side of the island. And we set off at 8.45am. The first stop was at a trick art museum. What a waste of time – this stop was one of the reasons I did not want to do this trip. Why come to an island of lots of pretty things, and spend time in a room taking stupid photos…. I sat outside in the sun.

Next up, we went to Seongeup folk village. Another stop I wasn’t keen on. I expected it to be some fake houses that they take tourists around. Which it kind of was. But rather than being totally fake, it was an actual living village of 1,800 people across about 300 houses. The man took us around his thatched roof house. And then tried to sell us ground up horse bones and horse oil moisturiser….

Lunch was at a barbecue pork restaurant. Yuck. They made me a bibimbap (rice, lettuce, bean sprouts) which was ok. But not that great.

Finally – the place I actually wanted to visit – Seongsan Ilchulbong Peak, the ‘sunrise peak’. This is what I thought Jeju Island was (and what you see in the photos), it surprised me when I found out that Jeju Island was actually a massive island with cities on it! It’s actually 3 times bigger than Singapore… This is one of three UNESCO sites on the island.

And of course they have made it into a theme park again – but once you navigate the millions of shops and stalls selling orange flavour everything and lots of tourist tat (Starbucks and Dunkin donuts included….), you are onto a path heading up the side of the crater. 500 steps up. And at the top, you can stand on the crater rim, looking out onto the grassy top. It’s not as big as it looks on pictures! And being only March, the grass wasn’t as green either. It was still pretty cool.

Next to the side of the crater is a small black sand and lava rock beach, from here some of the Haenyeo (women divers) put on a show. These woman traditionally went out to work, free diving to catch octopus and clams because Jeju used to be a very poor island. Now, no one does this anymore so the average age of these women is 70 – with the oldest being 94.

The women were wearing wetsuits, weights and rather strange looking masks. They carry a buoy, a net and a stick. Then they went off to fish.

I had a wander around some of the shops. The stuff for sale was rather expensive!! £6 for some orange flavour chocolate! We drove along the Jongdalri shore road for the next half hour. Bright blue ocean, but ruined a bit by all the constant developments all along the shore. There was basically no area which wasn’t developed. I suppose that’s what happens when 13 million tourists visit per year (and only 600k people actually live here). Bit of a shame. T

he final stop of the day – Manjang cave, the longest lava tunnel in Asia and another one of the UNESCO sites in Jeju. This part of the tunnel is 14km long, but only 1km is open to the public. The ground was wavy, from the lava flow and you could see the lava lines on the walls. The ceiling was very very high.

It was really cool. I made it to the 1km point, where there is a large stalagmite type thing, which was lit up in pretty colours! It was actually a nice walk – a bit chilly, but I was walking fast. Just watching out for the puddles of water in all the cracks in the ground.

We headed back to the city, which didn’t take too long – and were back at 5pm. 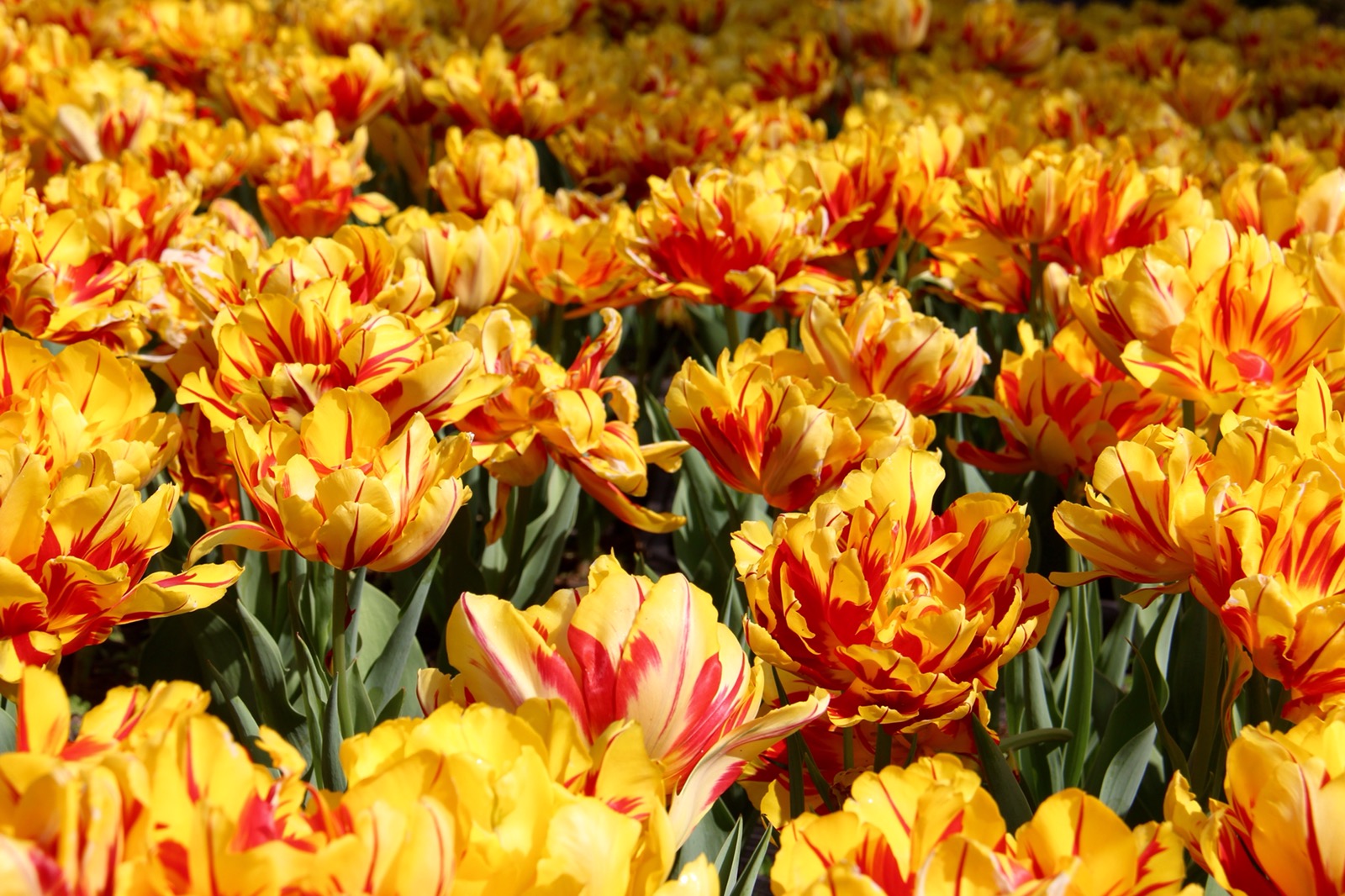 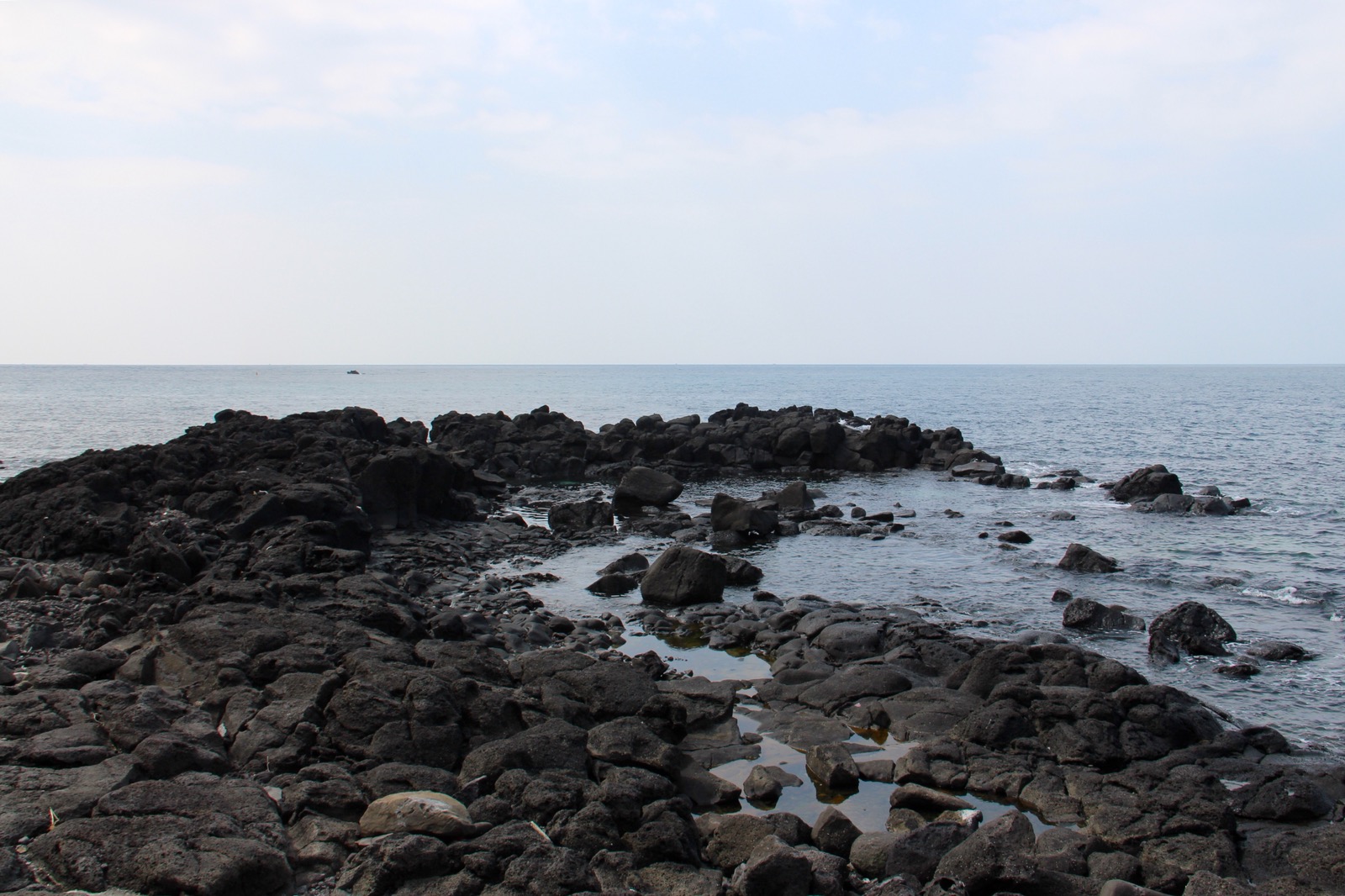