I tried to do this trip nearly 2 years ago.

I was enroute to the airport and the train was cancelled. So I missed my flight.

We landed at 12.30am. 1 hour late. The airport was almost deserted! So it was super quick getting through passport.

I’m meeting a friend and luckily she has only landed a short time before me – so didn’t have to wait too long!

There are now trains running from the airport to Helsinki city. But as it was a bit late, they aren’t too frequent.

And it was pouring with rain. So we decided to get a taxi.

As I say every time, I hate getting taxis.

But at nearly 1am, it was kind of necessary. The drive was a bit scary at times – it was raining so hard, we could barely see. And every now and then a car went past next to us in a huge puddle and splashed right over the car. Never seen such huge puddles!

The taxi driver got a bit lost – apparently our hotel is new and wasn’t where she thought it was. But as soon as we reached the city, she turned off the meter, so we didn’t have to pay whilst we got lost! So nice of her! Even still, it was rather expensive at EUR43. For about a 20 minute drive.

By now, it was almost 2am and definitely time for bed!

There isn’t too much to do in Helsinki. So it seems silly not to pop over to Estonia for the day!

We had breakfast in the hotel – bit lacking on fruit, but I got by with some melon and rye bread (rye bread in Nordic countries is always amazing!) with cloudberry jam!

The ferry port was only a short 20 minute walk away, down some dull concrete building streets and past a harbour.

I was expecting the harbour to be pretty, but it was just dull and grey with some big ferries.

The ferry terminal was rather like an airport, here ferries go to Tallinn, Stockholm, St Petersburg and a few other places (whilst I’m here, I’m wondering why I’m not going to Russia….!).

Our ferry was at 10.30am, but you have to be on the boat by 10am. And it was pretty big. But a bit of a struggle to find anywhere to sit! There were a few cafes with seats, but nowhere which was a ‘sitting area’, which was odd. So we ended up sitting at the front of the boat, in a bar (the only place with comfy seats!).

It’s a 2 hour ferry ride over to Tallinn. And we left exactly on time. It was a pretty smooth ride. But rather dull. It was raining, so we couldn’t see out of the window.

And then a band started playing.

Just wanted to sit in peace and quiet for a few hours!

We arrived at 12.30pm. Into the rain. It took about 20 minutes to walk to the old town part of the city.

This is a walled city, built in the 15th century. Some of the city walls and gates are still in place. 26 towers also remain, there were once 45. We walked along the edge of one of the sections of wall, a small market was lining the wall, with women selling knitwear – it was like stepping into Peru! Lots of llama jumpers, scarfs and baby outfits.

A lot of the streets are small, stone, winding lanes. Doorways leading off into small shops and staircases down to cafes. Tombstones lining some walls and little passage ways running overhead. 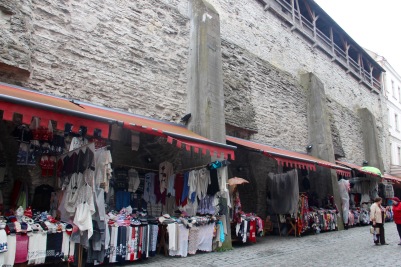 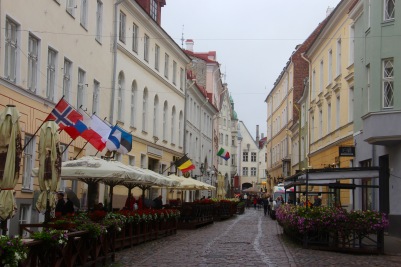 We accidentally ended up in one of the more famous passageways – St Catherine’s passage.

It was time for lunch.

There are a few vegan places in this small town! We massively over ordered for lunch, sharing a beetroot and rice wrap, a pumpkin and buckwheat burger, some coconut avocado cream dessert and a slice of raw caramel cake. With some mint tea and sea buckhorn berries in water…! Whoops! It was all really good though!

After spending absolutely ages eating lunch, we went back out into the rain to continue wandering around! We headed up the Toompea hill, at the top was the St Alexander Nevsky Cathedral. This is a relatively new cathedral – finished in 1900 – and designed with Russian onion shaped domes. Also up here was another church – the Dome Church – which has no dome. Inside, the walls are decorated with large coats-of-arms of Estonia’s noble families, a bit different!

Just around the corner from here were a few lookout points. The view was really pretty, across the red roofs of the old city, towards the harbour area. However it was still pouring rain and really misty.

Whilst it was raining, given its the middle of June, we were expecting the town to be busy. But it really wasn’t at all! The streets were quiet and many of the places we almost had to ourselves – crazy. 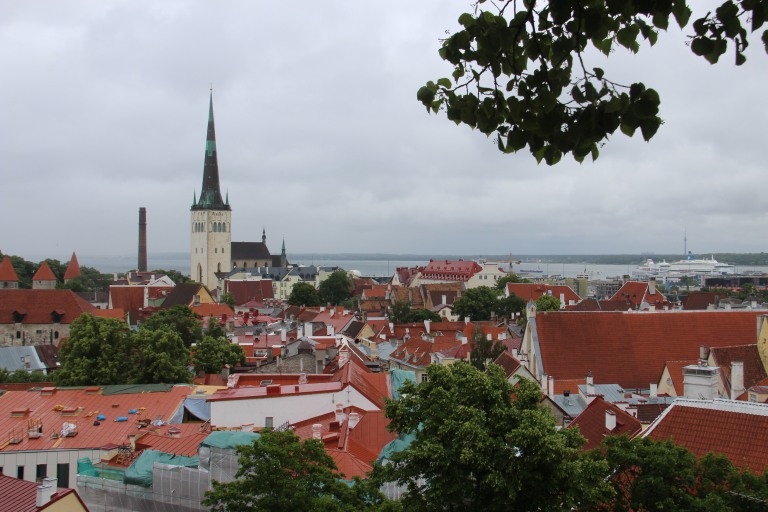 We made our way back down the hill, past some more of the city wall. Here we ended up in the Danish King’s Courtyard, a small, pretty square full of flowers. Here is also a tower known as the Short Leg Gate Tower, which is thought to be the most haunted building in Tallinn. Apparently ghosts have been seen here. Through a few more streets and we eventually found part of the wall which you can walk on. It cost EUR2. We walked up a rather scary stone spiral staircase, with holes all around the edges, then we were up on stone wall. A couple of storeys high. There were three towers along this part, again more sketchy wooden and stone staircases to climb up inside the 3 floors inside each tower. Scary.

The main square was full of market stalls, mostly selling wood craft, fruits and honey. There was a 2 day festival happening – and a band playing on a stage. Despite it pouring with rain, people were sitting out watching! No doubt getting totally soaked. The main square has lots of interesting buildings. A town hall, which is the only remaining gothic town hall in Northern Europe. A pharmacy which is the oldest shop in the city. It began dispensing in the 1400s and is still today. There was a small museum in the shop, with old medicine bottles – including some with dead hedgehogs, rotten frogs and dog poo inside…! 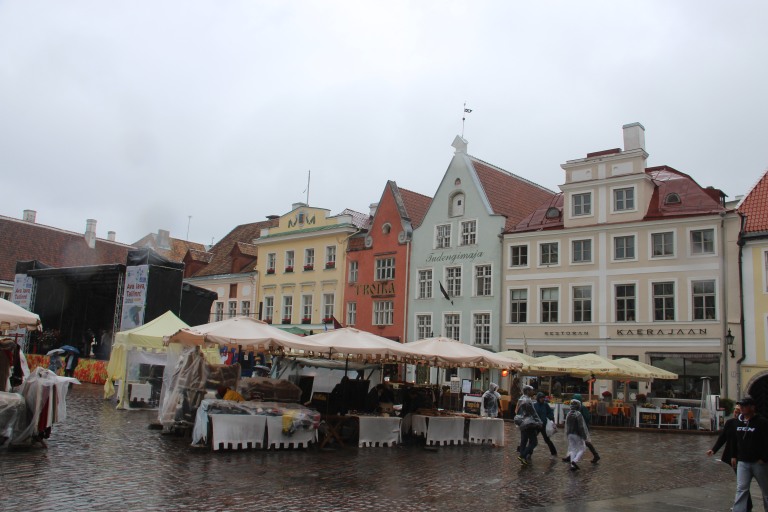 We found a supermarket – I love foreign supermarkets. And spent a while looking at all the different things here!

We had dinner at 5pm, which was super early. Especially as we hadn’t had lunch all that long ago! I had reserved a table at the most popular restaurant in the town. And it was vegan (!). The food was so good – we shared a starter of vegetables with cashew cheese and wasabi tofu. Then a Thai green vegetable curry. And vegan meringue (!) for pudding – wow was that incredible! I had no idea you could make meringue vegan!!

We spent ages sitting in the restaurant – it was so cute. But then had to head back outside in the rain for the walk back to the ferry. It seems that many people use the ferry as a day booze cruise. I had wondered why lots of people were carrying foldable trolleys this morning.

Turns out, there is a massive hyper market just by the ferry terminal and about half of the huge shop is alcohol. People were loading up their trolleys with crates of cans of beer.

We were almost the only people on the ferry who did not have a pack of beer with us. Our ferry left at 8.30pm and a very bumpy 2 hour ride back to Helsinki. We arrived back about 10.45pm and it was still pouring rain. We didn’t fancy another 20 minutes in the rain, so figured out how to get a tram back (EUR3) – and it took us basically back in front of the hotel!