I seem to be making a habit of ridiculously early mornings this trip. So today, 4.30am. To go hiking.

We went in the speedboats over to the nearby island – Waigeo- and were met by a guy who owns a homestay here and guides walks up the hill to watch birds. Plus a few dogs.

It was still dark, so we went by torch light up and up and up and up. The path was just a narrow muddy trail through the forest, which was pretty slippery and with large steps made from tree roots in places. We were given walking sticks, which was lucky as I would have fallen over. It was so hot. We had been told to cover up. So I wore leggings and a t shirt and I was soaked in sweat. I was also feeling really dizzy. It took about 45 minutes to reach the top.

And I was so pleased there was a small bit of tree to sit down. The red birds of paradise they have here are only found on 2 islands in the world. There were 2 of them in a tree in front of us. Apparently they do usually come closer, so that was a shame. 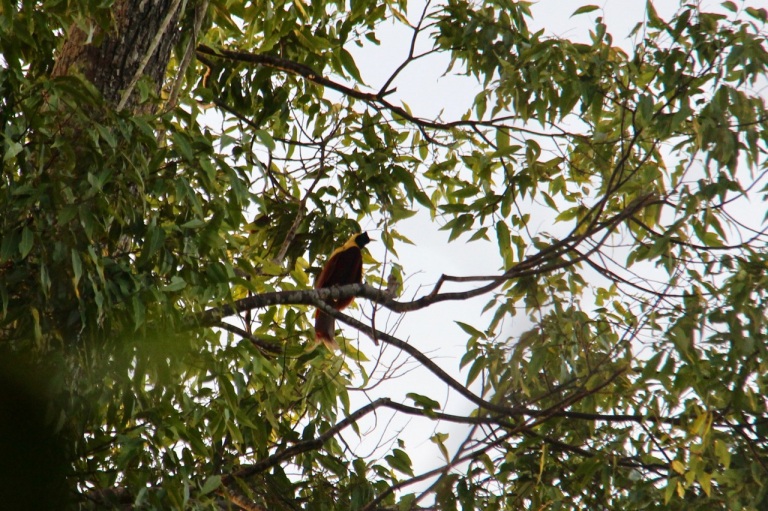 With your eyes you could only see a red blur. The camera came out marginally better, able to see the elaborate tail feathers and beak. We spent about 40 minutes at the top and by the time we were heading down, I was starting to feel less dizzy and sick. The way down felt so long. I hadn’t realised we had come so far. Through thick jungle. We saw a few other birds on the way down – a red eyed pigeon. And a red beaked parrot.

We ended up on a small beach and walked through a village. 300 people live here – quite a lot. The guide realised I could speak Indonesian and then for the whole remaining walk through the village he wouldn’t leave me alone. Even asking me to stay there with him and work at his guesthouse. Craziness.

Back on the boat, at 8.30am and time for some breakfast. Then off diving. The first dive was at an island which has been bombed several times. Half the reef has fallen away, leaving a wall at 20-30m. On the top of the wall, the reef was really shallow and so pretty. So many coloured sea fans. But not as many fish as we had been promised. A bit further along, we stopped off again for The 18th and final dive of this boat trip. On a large coral covered pinnacle. The coral was really pretty. A black tip shark went by. There was a hawksbill turtle at the end. That’s about all I saw.

Back on the boat, there was a chaotic rush of equipment washing and hanging out to dry. Overall the diving has been good. The corals have been amazing. But the sea life is not what I expected. For the most bio diverse place in the planet, I was expecting so much more. But the reefs felt relatively bare. Not that many creatures living in them. And not the big schools of fish I was expecting.

I was speaking to one of the guides who has been working here for 6 years. He said he has seen a massive decline in the numbers of fish here. Because of fishing. Yet I just don’t understand why people still insist on eating fish. The oceans are dying.

And then we begun the journey back to Sorong. 5 hours of sailing. Means 5 hours for equipment to dry. And whilst it’s a bit sunny, it’s quite cloudy. Which isn’t ideal drying conditions! I didn’t do much for those few hours. Chatted for a bit. Laid down. Fell asleep by accident. And sorted out photos. If I don’t do it as I go along, I end up with such a backlog that it never gets done. We pulled into Sorong harbour around 6pm, just as the sun was setting. The water turned from a beautiful blue, to a merky grey colour and the air smelled of pollution. I was standing out watching the sunset and the chef came running up to me with a plate of cooked bananas that he had made for me. How nice! This is the first day that I haven’t missed out on the afternoon snack. Dinner was a barbecue. This already didn’t bode well. And I had pineapple and corn. Thrilling. There wasn’t even any plain rice tonight (my staple for the past week). There was oily, fried rice full of onion. The food has been terrible. They knew well in advance that I was vegan and I even emailed several times to check and was told it was all fine. I am so hungry.