Again, I was so tired and getting up at 8am felt so hard.

Breakfast was ready for us. On a small table on the balcony next to our room. Last night it was too dark to see anything. But today we could finally appreciate the surroundings. We were right next to a busy park. Horse and carts trotting down the cobbled street underneath us, alongside the cyclos and old cars. Busy morning.

Breakfast was delicious. Guava juice seems to be a common theme. Plus fruit; banana, guava, papaya and mango. And toast with guava jam! So good.

Then out for a wander around.

The guide took us around for the first two hours. Trinidad was built on huge sugar fortunes amassed in the adjacent Valle de los Ingenios during the early 19th century. It is one of the most intact colonial towns in the Americas and was declared a World Heritage Site by Unesco in 1988.

Walking around, it feels very similar to Cartagena (Colombia) and Antigua (Guatemala). All the streets are full of colourful buildings. They all used to be painted red and orange. 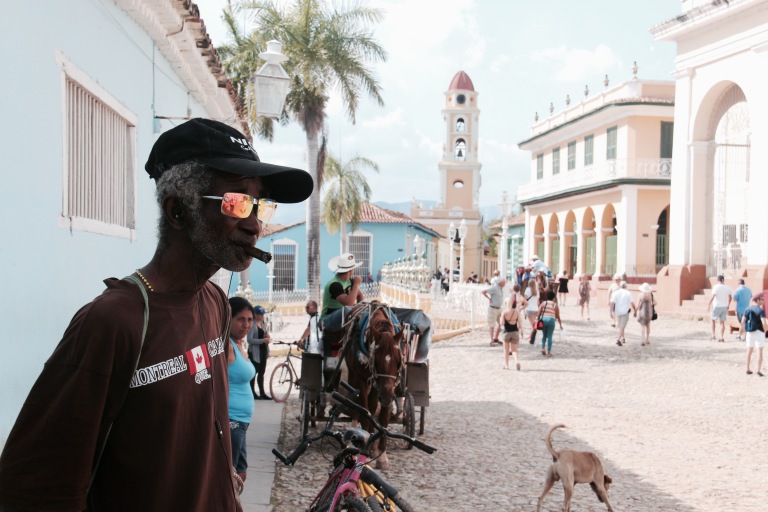 Then when the Spanish arrived, they tried to claim the city as it was painted in their colours. So the residents then all chose different colours. These colours are now protected. They all have huge windows, which allows for airflow. And they all have bars across them, which stopped pirates.

We went to a ration shop, past various churches, the main plaza (plaza major), the casa de la musica (a bar which has live music) and lots of steps leading up to it. It is such a pretty town.

After the walk, some of the group were going off to ride horses. I didn’t fancy that, so carried on wandering around. I ended up in a very local area, with much smaller houses and no people at all. Just locals and horses. I had lunch at a restaurant which had loads of vegetation options.

I had falafel and salad, with a guava/banana smoothie which were both so good.

Next up, working out the wifi. I queued for half an hour to buy an internet scratch card. This then lets you log into the public wifi in the park. At all times of the day, the park is full of people on their phones using wifi.

Then a couple of hours to do nothing. At 5pm, we had a salsa lesson.

I was dreading it.

We were up on a rooftop, and it was hot.

The teachers were good, and it actually wasn’t that bad.

I tried to sleep early. But at 11pm I was woken up by live music. It sounded like it was in the same room. There must be an open air bar next door. Not impressed.

Another day of struggling to get up.

Same again for breakfast – fruit (mango, guava, banana and pineapple) and a piece of toast.

And then I caught a taxi towards the beach. Which was surprisingly easy. I did it all in Spanish and the guy gave me the normal price ($8).

It was about a 20 minute drive, out of the town and into the small bit of countryside, before we hit a large salt flat and the ocean.

The beach strip is a long spit, coming away from the mainland. Playa Ancon. I was at the dive centre for 8.45am. I was told to be here for 9am. There was no one here.

The dive centre is located in an old beach side concrete block hotel. Painted pink and green. But it has a nice beach. White sand and flat blue ocean.

By 9.20am it was getting busy and finally a guy turned up. It was chaos.

He had no idea who had booked, who was diving, or how many people he could fit. It was nearly 10.30am by the time we were all loaded onto the boat. Which involved us carrying all our own gear and tanks to the boat. Absolutely no customer service here.

A 20 minute boat drive and we had reached our destination. Again chaotic whilst we were allocated groups. I had rented a BCD (I brought all my own other equipment). And when we got in the water, it was apparent that the inflator button was faulty and was leaking air. The response from the guy was – oh that’s normal, look mine does it too. Not the right answer.

The actual dive was very average.

The site was a sloping reef, with some sand channels and lots of corals. The water was very clear and blue. But absolutely no fish. And no sea creatures. No life at all. They obviously fish a lot here. I wasn’t too impressed. Nothing to take photos of. 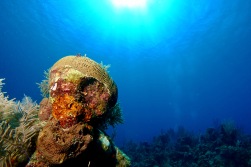 When we got back to land, there was no help getting off the boat with equipment. Just left to fend for ourselves. I really was not impressed with this place.

I caught a taxi back to town and had two hours before my group was meeting again. So quickly ran around getting things done – like postcards, washing, buying water (surprisingly difficult).

We were heading to the beach.

What I didn’t realise was that we were going back to exactly the same part of beach as I had just come from.

But now, it was absolutely heaving with people. I do not enjoy jam packed touristy package holiday style beaches. And I wasn’t feeling like sitting here for the next 6 hours with nothing to do. So I left and came back to town.

I went for a walk around again. Found the craft market and bought some bits and pieces. Sadly the towers were all closed, so I couldn’t go up (stupidly didn’t do that yesterday). I wandered into the more ‘local’ part of town and found a mini fruit stand, so got a couple of mangos. I’m sure he overcharged me, but $1 for 2 mangos is ok.

For dinner I stopped at a small local cafe. The menu was written on a board door. I ordered rice with pineapple, not knowing what that meant, but the man assured me I had no meat (again all in Spanish!). It took about half an hour to arrive. And ended up being fried rice. 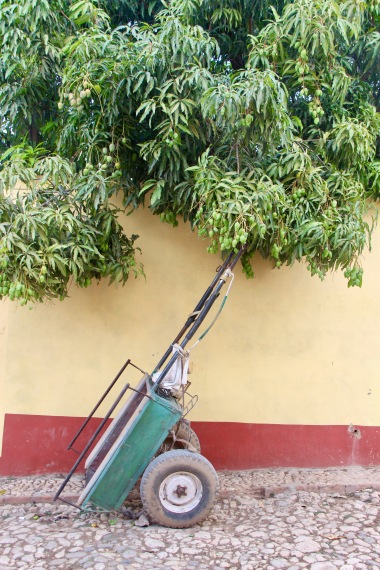 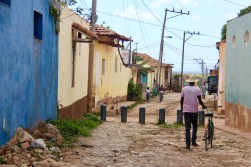 Not my favourite, but right now – after barely eating proper food for several days, it was good. The sun sets relatively late here. I watched it at 7.30pm from the roof of the house that I am staying in. We have a view over the Central Park which is full of palm trees, and a church, so it was really pretty.