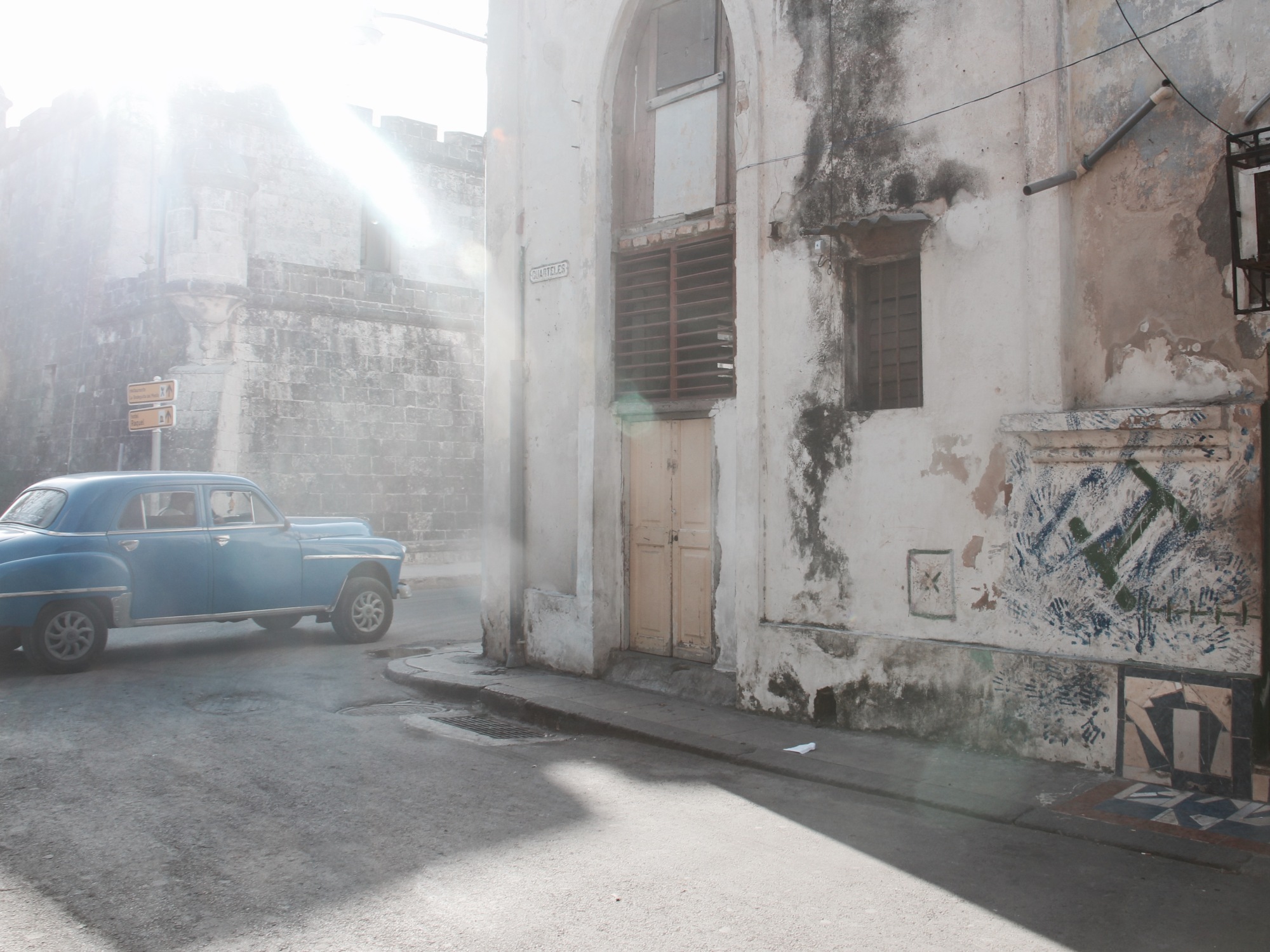 We arrived in the city about 5pm and our first stop was at the Plaza de la Revolucion. This was a huge empty space (31st largest city square in the world) in the middle, which has been used for many speeches to millions of Cubans in the past.

On one side of the square was a taxi rank, completely full of well maintained, open top, colourful old cars. They were really pretty. Another side of the square was entirety taken up by a 109m tall tower, made from marble and a statue of Jose Marti. A national hero. Opposite the tower was two government buildings, with murals of each of Che Guevara and Fidel Castro.

Then we made our way to the old town of Havana. The old town of Havana was declared a UNESCO world heritage site back in 1982 and has close to 1,000 buildings of historic importance. And first stop, one of the four main squares. Plaza de Armas, the oldest square in Havana which was established in 1520, when the city was first laid out. However most of the buildings here were built later, in the 1700s. It was filled with a garden, with lots of locals just hanging out.

We crossed over Obispo street, the street which is famous for its bars and music. And headed to the next square, Plaza de San Francisco, where Spanish vessels used to dock. But main priority here, finding a bathroom. I went into a hotel.

The narrow street lead through to the next square. Plaza Vieja. This is the largest square, and was originally used for military exercises. Now there are many shops and restaurants, a school and a few museums. By now, I was starving. And unexpectedly, there was a vegan ice cream stall! Absolutely no food anywhere in this country. And the first food item I see in Havana, is coconut milk icecream. It was $2 for one – and it came in a halved out coconut. It was so delicious. 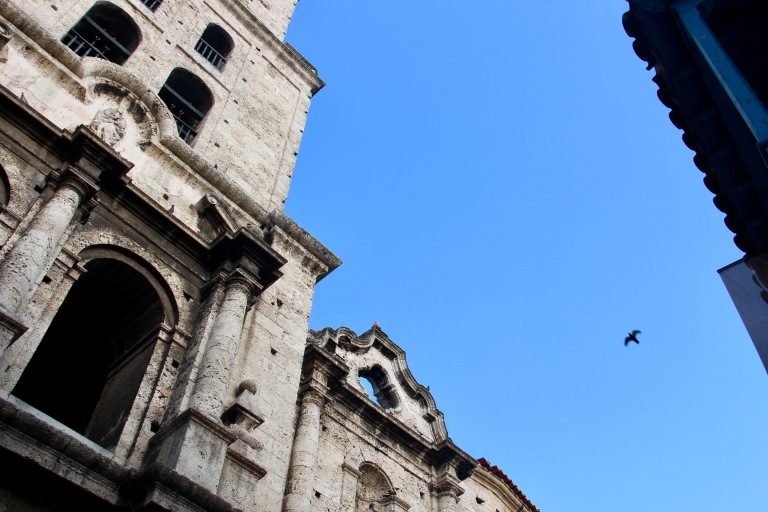 Back on the bus, and to the place we will be staying. Again, we are staying in Casa Paticulars (people’s homes) and my one was a short walk away from the main base. The whole area appears run down and derelict. And feels rather unsafe. We are the only white people. All the locals are in small groups, sitting around and standing about in the streets. Once up one flight of stairs (luckily not more!) and inside, the house was actually really nice – a complete contrast to the outside. Well maintained rooms and such high elaborate ceilings. These buildings would have once been amazing.

We dumped our things, then headed back outside for dinner. It was now nearly 8pm and I was so hungry. This area is a total maze. I am worried how we will find it again in the dark later. Also, as we have no data or wifi, and no real map (just a photo of a page of the lonely planet book), I have no idea how we made it back to the old town. We just headed in what we hoped was the right direction, through a maze of streets and we made it.

We went to the hotel Ambos Mundos, which was home to Nobel prize winner Ernest Hemmingway from 1932 to 1939 and his room at 511 as been left as he left it. The rooftop has a bar and restaurant which has a view over the city. Again, very limited food options. I had rice and beans. And a mojitio (which wasn’t very nice). Drinks in this country are so cheap. Bottles of rum cost about $4 and a drink in a bar will be $3.

A cannon fires at 9pm to signal the closing of the city gates at La Cabana, the fort across the water. It was loud and made me jump. Old town Havana is usually packed in the evenings, bars spilling out into the streets and live music and dancers everywhere. However, today is Easter weekend. And tomorrow, Easter Sunday. So everywhere was shut. We found one bar which was still open, and stayed there for a while.

On the walk back, we passed by the National Capital building, Hotel Inglaterra (which is apparently famous) and the grand theatre. All the big, white buildings were lit up and looked really pretty.

From here, we passed up the ‘Prado’ street. A large boulevard, lined with trees and statues of lions, with a wide pedestrianised walkway through the centre. It was modelled on Barcelona. Then we reached the edge of the ‘ghetto’. A few streets in and I recognised nothing. I thought we should nearly be there, but I couldn’t see the ocean (I knew we could see the ocean from our house) and nothing looked right. We kept going and kept going. I was glad most of the group was there, otherwise I would have been rather worried. But we finally recognised a building and got there. Thank goodness!

Getting up was a struggle. But places to see. After a plate of fruit (about the only food I can eat here. And the only other option was eggs), we hopped across the street and ended up on the malecon. (This is a strange word meaning the pavement next to the sea. Lots of countries seem to use it, but I’ve never heard this being used in English).

The buildings along the ocean were falling apart. Old cars were driving by. Such a strange place. And the fort in the distance. We passed by a piece of the old city wall. None of this is left now, aside from fragments here and there. Built between 1674 and 1740, the wall was 1.5m thick and 10m high. But all we saw was a small piece with a watch tower. 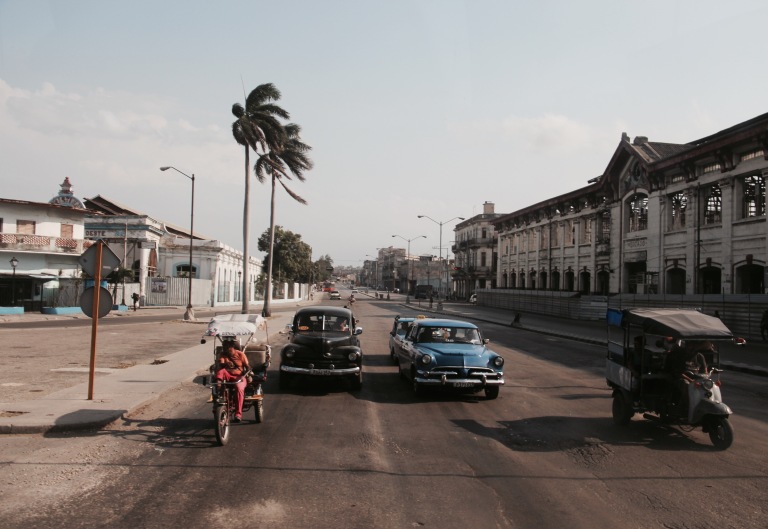 The streets with small houses were busy. Small fruit shops. Butchers. Holes in the wall to buy coffee. Plaza de la Cathedral, which despite having one of the oldest churches on it (built in the 1700’s), is the newest of the four squares in the old town. This was my favourite square. The buildings to each side of the church had arched passageways beneath them, it was really pretty. From here, we passed down Mercadares Street, a cobbled pedestrianised street, which has been restored. Most places were closed, potentially because it was only 9am. And a Sunday. We stopped off at a chocolate shop. Which oddly was called the chocolate museum.

Then we made our way through a maze of streets. And finally back onto the Main Street of bars. At the end of the street was what the lonely planet referred to as the ‘best supermarket in the country’. I was excited. That was short lived. It was just like all the others. Selling basically nothing. And people queuing up. For mayonnaise. And pasta. That’s about all they had. 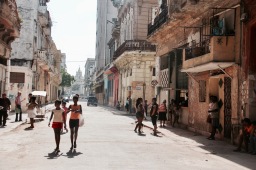 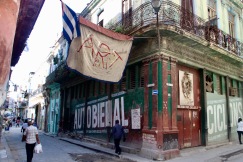 Back at the hotel, and our taxi had arrived early! It’s $25 to the airport and he ride took about 45 minutes, which is longer than I expected. The airport was busy. And completely disorganised. I spent 35 minutes queuing to drop my bag, despite there only being about 10 people in front of me. Then another 40 minutes to get through passport and scanning. Scanning was ridiculous. They just can’t cope with the numbers of people passing through this airport.

On one side there was mass chaos as there just wasn’t space to queue. On the other side was a queue snaking around behind all the passport desks. Craziness. Once I had passed though (for once I didn’t get stopped with all my diving stuff and camera equipment!) I was met with a packed waiting hall. And one shop. However, that one shop had biscuits! Like woah.

And then I had to queue 20 minutes to buy them.

Information was terrible – only two information TVs screens in the airport. And I was starting to panic. But then around 2.45pm, we finally got a gate. Downstairs. In a boiling hot, packed room. And a 40 minute queue to get on a bus to the plane.

This was beyond a joke. And I was so hungry (having eaten a plate of fruit and 5 biscuits all day). I couldn’t wait to leave. How ironic. And finally, nearly 2 hours late, at 4pm, we finally left.

The flight was 2 hours to Santo Domingo, the capital of the Dominican Republic. It didn’t look far on the map, so that was surprisingly long. I settled down (as much as I could – I could barely sit down as the seats were so close together) and began to write this. But the man next to me wouldn’t stop talking to me.

He was from Puerto Rico and was very interesting, but I just wanted some peace and quiet.

At 6pm, we arrived. Back into civilisation. I already had my $10 tourist card, that I had bought in London before leaving. So passport was super quick. And my taxi driver was waiting for me. It took about 30 minutes to drive into the city, along the coastline, watching the sunset.

I’m staying in Santo Domingo old town, a colonial town which is also an UNESCO world heritage site. Inside the city walls, full of rows of colourful houses, it looks cute. And the hotel is amazing. However, some jobs. I needed money. And the nearest ATM was in a supermarket about 6 blocks away. And woah. Food. So much of it. This is what you call a supermarket. I bought so much – watermelon, mangos, chocolate soy milk (!), avocado. And then called in at a restaurant across the street – which had loads of vegan food on the menu – to get a takeaway falafel sandwich, which was do delicious. So good to eat real food again! What an exhausting day.