Land sickness prevented me from sleeping. I’ve become used to the continual sway of the boat.
I gave up at 4am and faffed for a while until 5.45am and time to leave.
I’m joining a day trip to Bartolome island. There are several different ways to see the Galapagos – either on day trips from the town, or by being on a boat and stopping off at different places.
We were picked up at 6am by the main pier. And then drove back the way I had come yesterday afternoon from Itabaca Chanel.
We arrived about 7am. Not sure why we faffed so much. And then onto our boat for the day – a small catamaran called Adriana.
We had breakfast on the boat – just fruit for me – as we started sailing north towards Bartolome.
We sailed past two rocky islands – Major Daphne and Minor Daphne. Rock means bird breeding ground. This particular rock covered in finches and nazca boobies. On the Major island, they did finch research into natural selection. Finches breed every year and they found that in dry years, beaks became bigger. But in wet years the birds with smaller beaks were selected for.
Then continuing on. As the water was flat it was possible to see animals – a few sharks (probably silky), sealions, turtles, spinner dolphins under the boat and jumping around us, and petrol birds skimming and walking across the water in front. So cool.

We were basically sailing back to where I was yesterday – right next to Cousins Rock. To the moonscape islands.
First stop – on Bartolome island. A blue footed boobie was waiting for us on the landing strip. Then a board walk path lead all the way up to the top of the island, with just over 400 steps.
The island is completely volcanic – made of lumps of lava. The surrounding area has so many volcanos. It was such a cool brown/red/dust landscape. There were small shrubs, few different cactus and lava lizards. That is all. Nothing else lives here due to the lack of water.
We stopped off at several look out points enroute to the top. So awesome.
The top had ‘The Galapagos View’. Volcano craters separated by two curved beaches in the middle. And totally surrounded by bright blue waters. 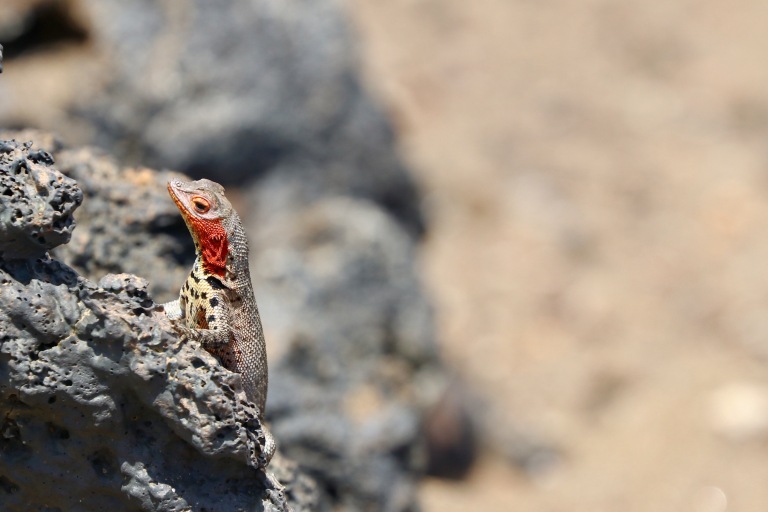 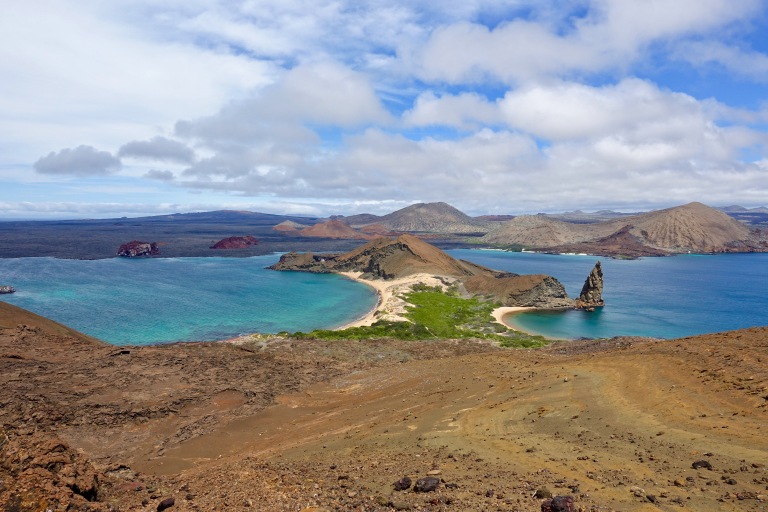 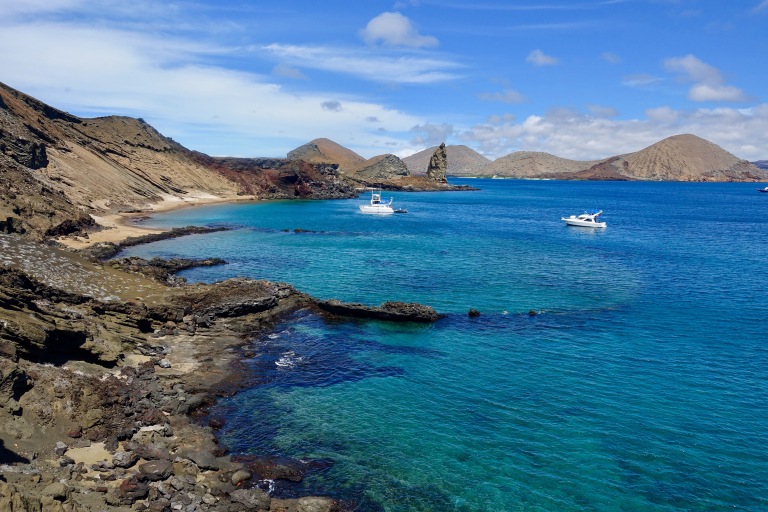 Then back on the boat for a short trip across to Sullivan Bay, on Santiago Island.
A white sand beach, surrounded by volcanic lava flow rock. I went snorkelling along the edge of the rocks. Standard things – blennies, parrot fish, small snapper, nothing that exciting. (I’ve been very spoilt the past week). But there were a couple of sea lions swimming around in the water next to me, which was cool.

Sad I didn’t see the penguins.
Lunch – vegetarian option being plain carrots and plain rice. Exciting.
Then 2pm we began to sail back to Santa Cruz. And it had become very wavy. A week ago would have seen me at the back of the boat probably being sick. But now, I’m used to this – being on the boat cures my land sickness!
So much sailing for just short stops on the island. It was cool. But probably my least enjoyable day. Not to say it was dull – just a lot of boat time and very limited wildlife.
By the time we were back in town it was 7pm. Such a long day.
Some friends were having dinner at the market which was on the street next to where I was staying, so I joined them. Despite most of the menu being fish, they did have a large vegetarian section. Local food has a lot of vegetarian items. I had rice, beans, chips, platano and corn – was really good. And cost $7.50, which is expensive, but pretty reasonable for this town.
Then to a bar for a drink. And bed time.