An early morning, leaving at 6.30am. And I was surprised that I was picked up by the same guide again! I had booked through a different company, but still end up with the same guide and driver, random.

We headed out of the city. Again, no traffic. Into the countryside. Towards Mysore.

About an hour into the journey, we stopped to have some breakfast at a small roadside cafe. It was busy. Full of locals. I was very excited for one of my favourite foods – dosa masala! A thin slightly crispy pancake, made from fermented rice. Filled with a dry, spicy potato curry. And with dips – usually a sambar (thin vegetable curry sauce) and coconut chutney. Awesome. And it was 60p.

Then back on the road.

Our first stop was in the town of Srirangapatnam, 16km outside of Mysore. This is a fort town which was once ruled by Tipu Sultan. In 1799 the British started a war against him, and killed him. The ramparts, battlements and some of the gates of the fort still stand, and we drove past a few. Plus Tipu Sultan's resting place. Where there is now a small concrete monument area. 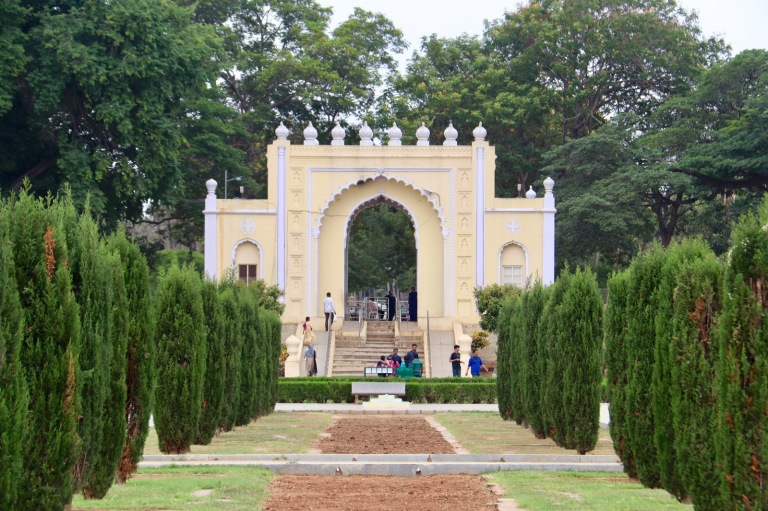 The main attraction is Tipu's Summer Palace. A building made of teak. Inside the walls are covered in elaborate paintings and carvings. It's now used as a museum – with various bits and pieces – furniture, guns, his trousers.

We also visited a dungeon, where they used to drown prisoners. Not very nice. But today, it's just an arched filled room beneath a patch of grass, with views to the surrounding swampland and river.

And a temple – which has a 4.5m-long reclining statue of Ranganatha, a manifestation of Vishnu. The temple was packed. You queue in very narrow aisles surrounded by metal barrier lane markers. Incredibly claustrophobic. So I didn't go the entire was around the temple. Just around some of the inside, and around the edges. It was very similar to a temple I visited in Bikaner a few years ago. Just minus all the rats! 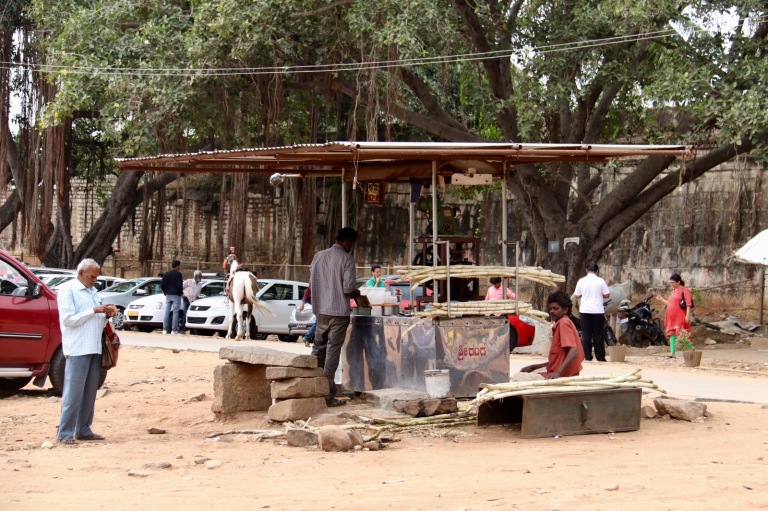 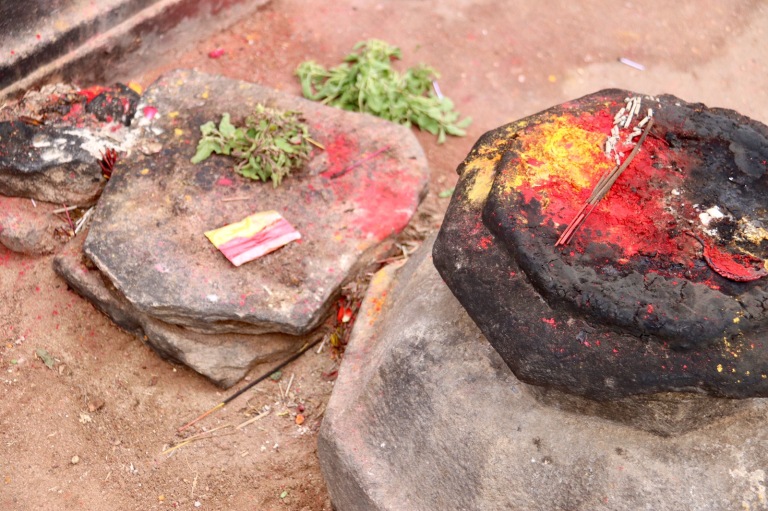 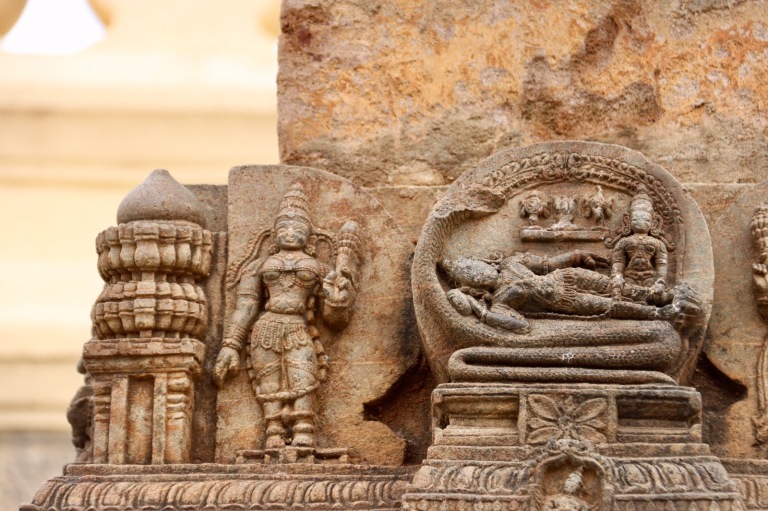 Then we headed into Mysore city. The city of palaces. (There are 7!). Back onto busy roads. Bustling people in and out of shops. Small festivals happening at the sides of the streets.

Our first stop was Mysore Palace. A world heritage site. The current palace was constructed in 1912 by the British. The previous, wooden palace burned down from fireworks from a wedding celebration.

My guide hired an official guide to walk around the palace. I wasn't particularly bothered – I much prefer to wander at my own speed rather than stopping off seconds for a history lesson.

Parts of the palace are open to the public. But large parts are still used as residential areas for the royal family.

There are gold items – statues, presents, a throne to go on top of an elephant. Rooms covered in elaborate paintings, depicting Independence Day. Lots of colourful pillars running around corridors. A huge dance room. The marriage room. An outdoor fighting area (they hold a fight once a year in front of the king) and a large entrance room, which has open arches looking out onto the grounds. It was pretty.

Strange rule inside. No cameras. But photos on your phone are fine. Have you ever heard anything so silly?!

Outside the palace were an abundance of food sellers – fruit, chaats (savoury crunchy snacks) and sugar cane juice.

From here we headed up Chamundi Hill. We parked near the top, then there were steps heading further up the hill. All along these steps were people selling sugarcane juice and chaats. Food is everywhere.

At the top was chaos. A temple. Which was absolutely packed. The queues to get inside were winding round and round. Around the temple was so busy you could barely move. People selling blessings. Others selling offerings – elaborate coconuts decorated with flowers. An area full of incense. Shoe storage men. And a baby cow sitting in the middle of the chaos. 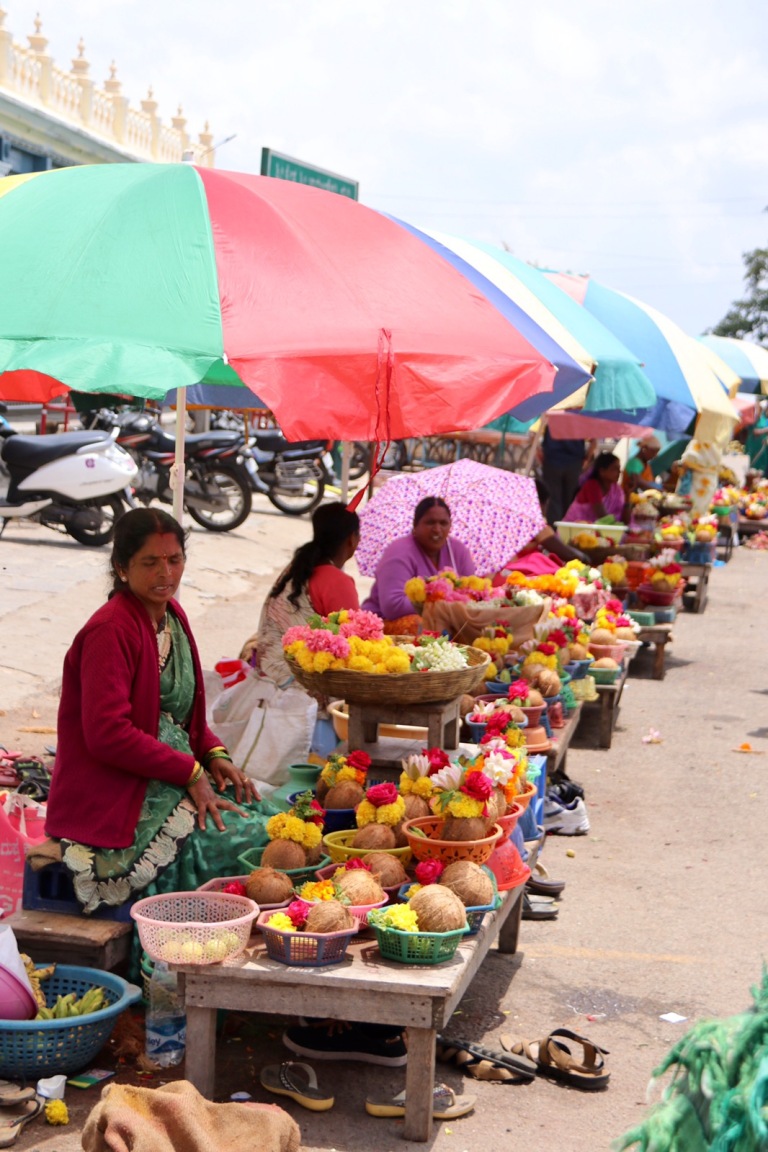 On the way back down we stopped off at a look out point. You could see right back across the city – the palace, lots of other palace-like buildings, a large horse race course, and lots and lots of buildings.

We stopped off at St Philomena's cathedral. Not sure why. It wasn't too exciting. Just s normal looking church.

Then, at 2pm it was time for the long drive back to Bangalore. 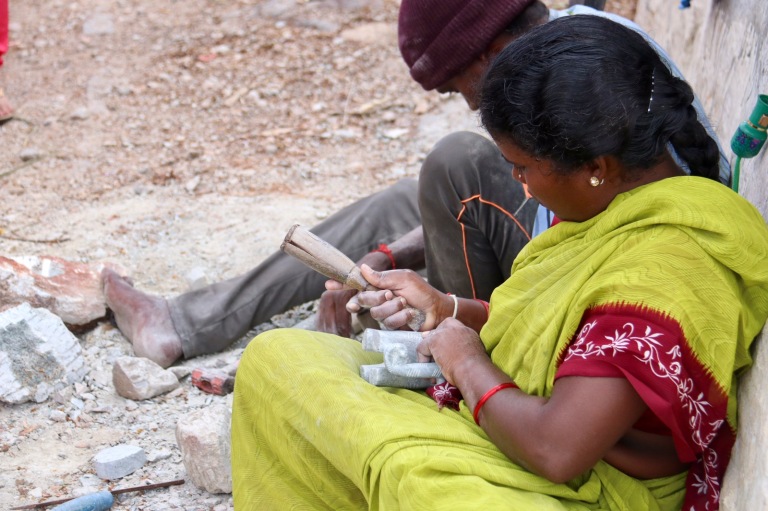 The drive was interesting – lots of countryside. Every now and then a small village. Some selling wooden toys (mostly rocking horses). And others with market stalls running along the length of the streets.

We stopped off for lunch at around 3.30pm. I was starving. It was a busy chain-cafe. With a whole south and North Indian menu. Being in south India, I really wanted South Indian food. And when you have no idea what anything is / can't choose, a thali is always a good option – a bit of everything. This thali was ridiculous. 16 items.

There were a few things I've not had before – poori (a puffed up, fried bread), palya (like a black pepper tasting poppadom) plus a huge selection of different curries, chutney, sweet liquid and a sweet halva. Woah. So delicious. I managed about half….! 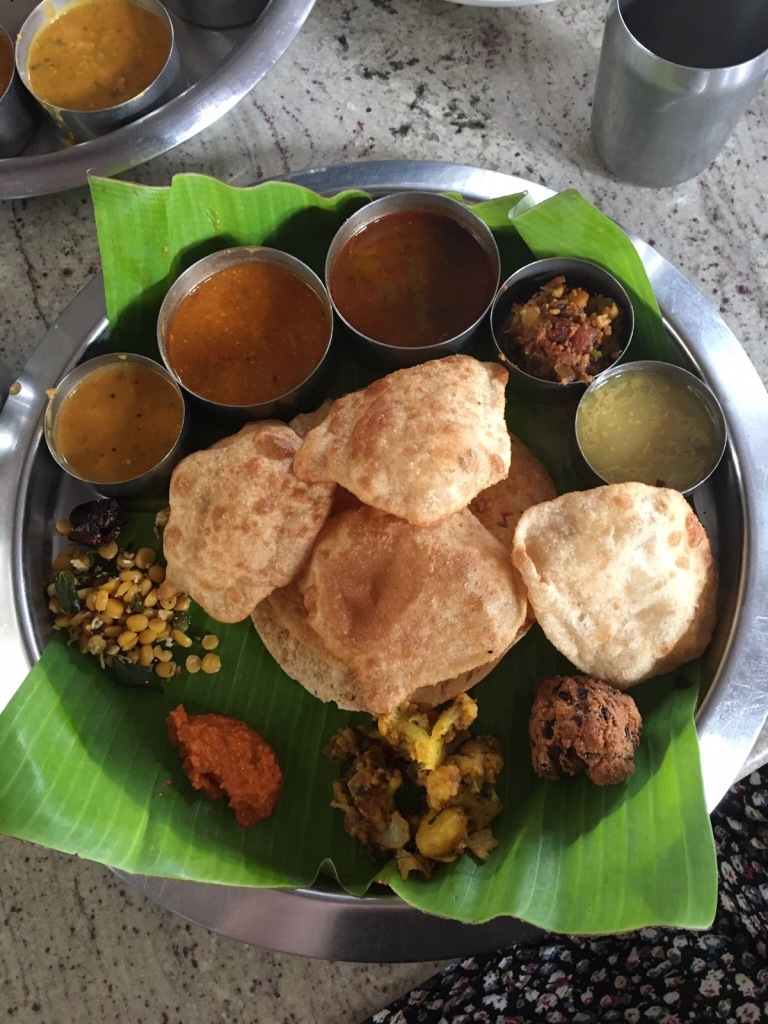 It had been raining whilst we were eating. And back on the road for the last part of the journey.

We got back into Bangalore around 5.30pm, but then took us an hour to cross a few kilometres to the hotel. There are metro works happening on the west side of the city and the traffic was horrendous. (Actually, it's just like that everywhere!).

I was so tired, no energy for dinner. Straight to bed.