Up again at 5.30am. Watched the sunrise as we put the tent down. Porridge. Then we left just before 7am.

We drove out of the park. But didn’t stop. We didn’t see anything new.

Everyone was now bored on zebra, impala, springbok and giraffe. But I wasn’t. I could still watch them for a few more days!

We stopped back in the town of Outjo. But this time we went to a different area, with a larger supermarket. We were stopped for over an hour. The truck was doing a bit shop so needed time for that. I bought a few snacks and water. Then went to sit at a cute cafe across the road. Strange place for a very touristy cafe. But I imagine a lot of overland trucks would stop here. It provided shelter from the local people who were all just hanging about in the supermarket car park – some trying to sell carved rocks to us.

The drive wasn’t too exciting. Miles and miles of flat land. With small trees and shrubs. Every now and then some cows. This is a large cow farming area.

We stopped after a few hours. It was around 11am and it was very hot.

We were at the petrified forest. Here are fossils of cone-bearing trees, which are estimated to be around 260 million years old. A length of time that I cannot really comprehend.

The trees are thought to have originated in Congo. But were swept here when glaciers were melting from the ice age. 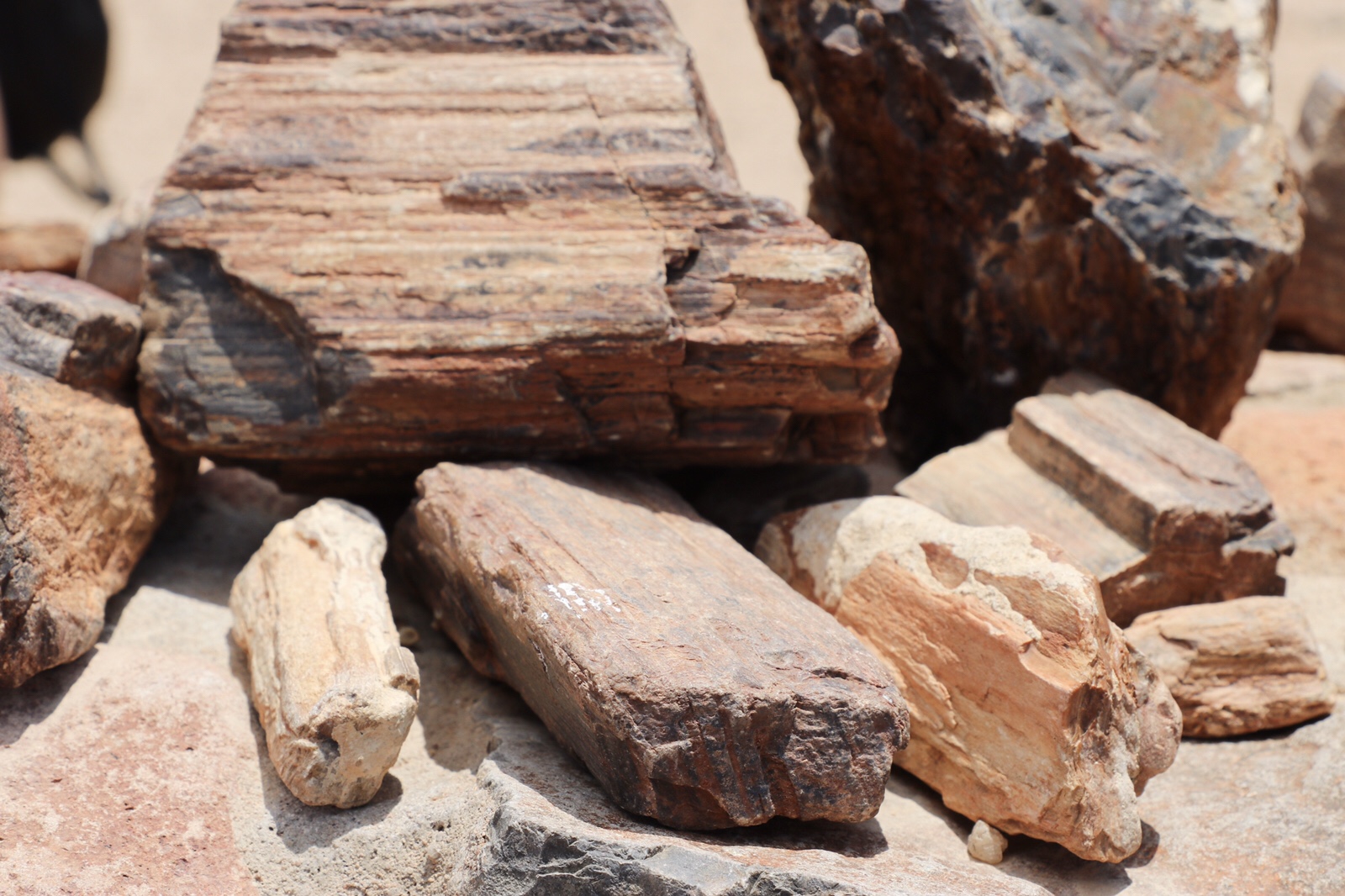 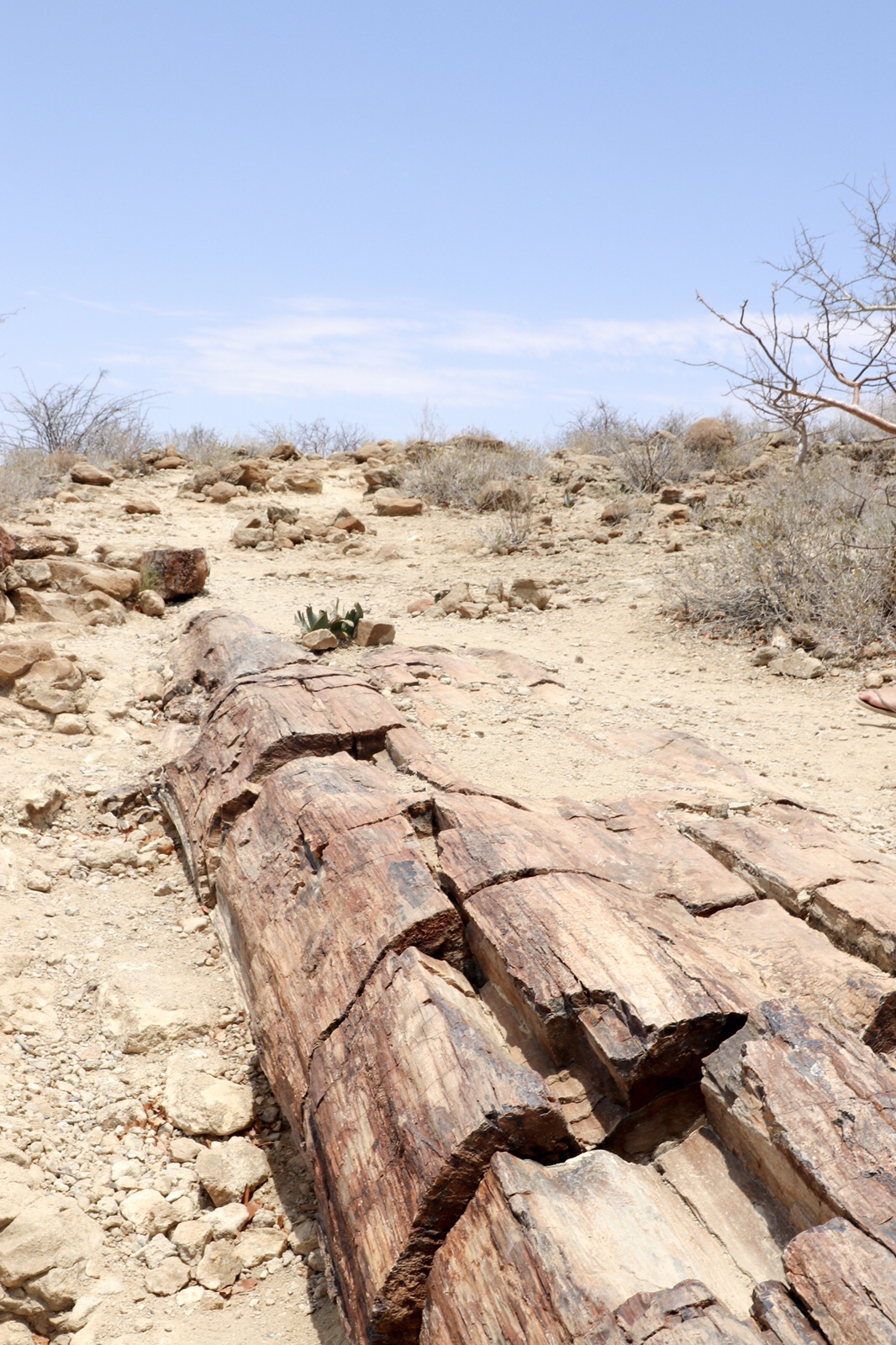 There were bits of rock everywhere. It was strange. Still very tree like. Knots where branches used to be were visible, along with the life rings inside the trunks and some bark. However, they were completely hard like stone to touch.

Some were in pieces. However other parts were almost fully intact. One was 35m long.

We were also shown some plants. One being very poisonous to humans – a tangle of light green stalks. And another, the National flower of Namibia. 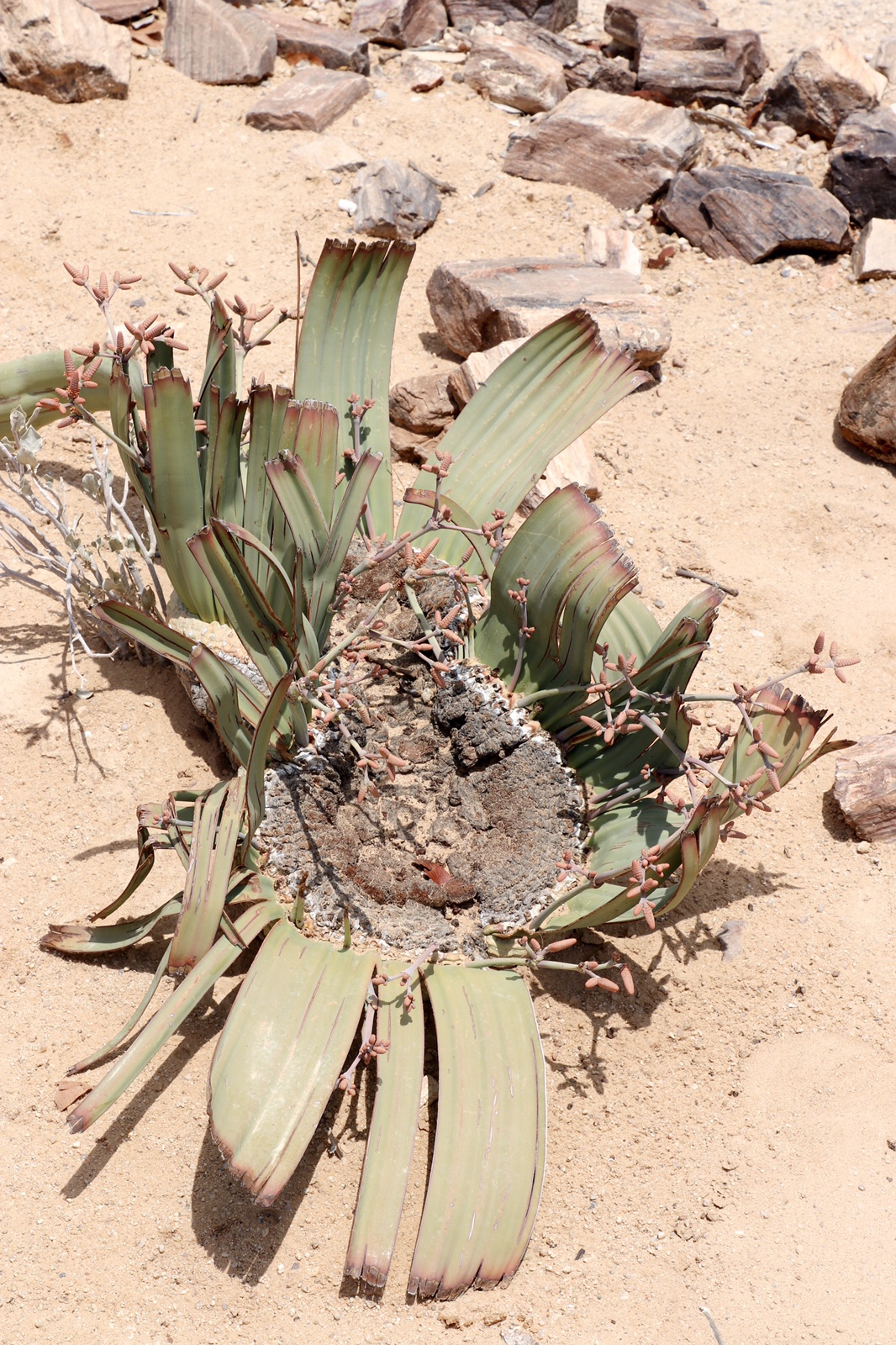 I was expecting something more beautiful. But it wasn’t. The welwitschias plant sits low on the ground and has two long leaves which grown from a brown lumpy middle. The leaves get torn in the wind and eaten by animals, so they are ripped and short. Many of them have been growing for up to 2,000 years. Each of them were marked with a ring of petrified wood rocks – cute. 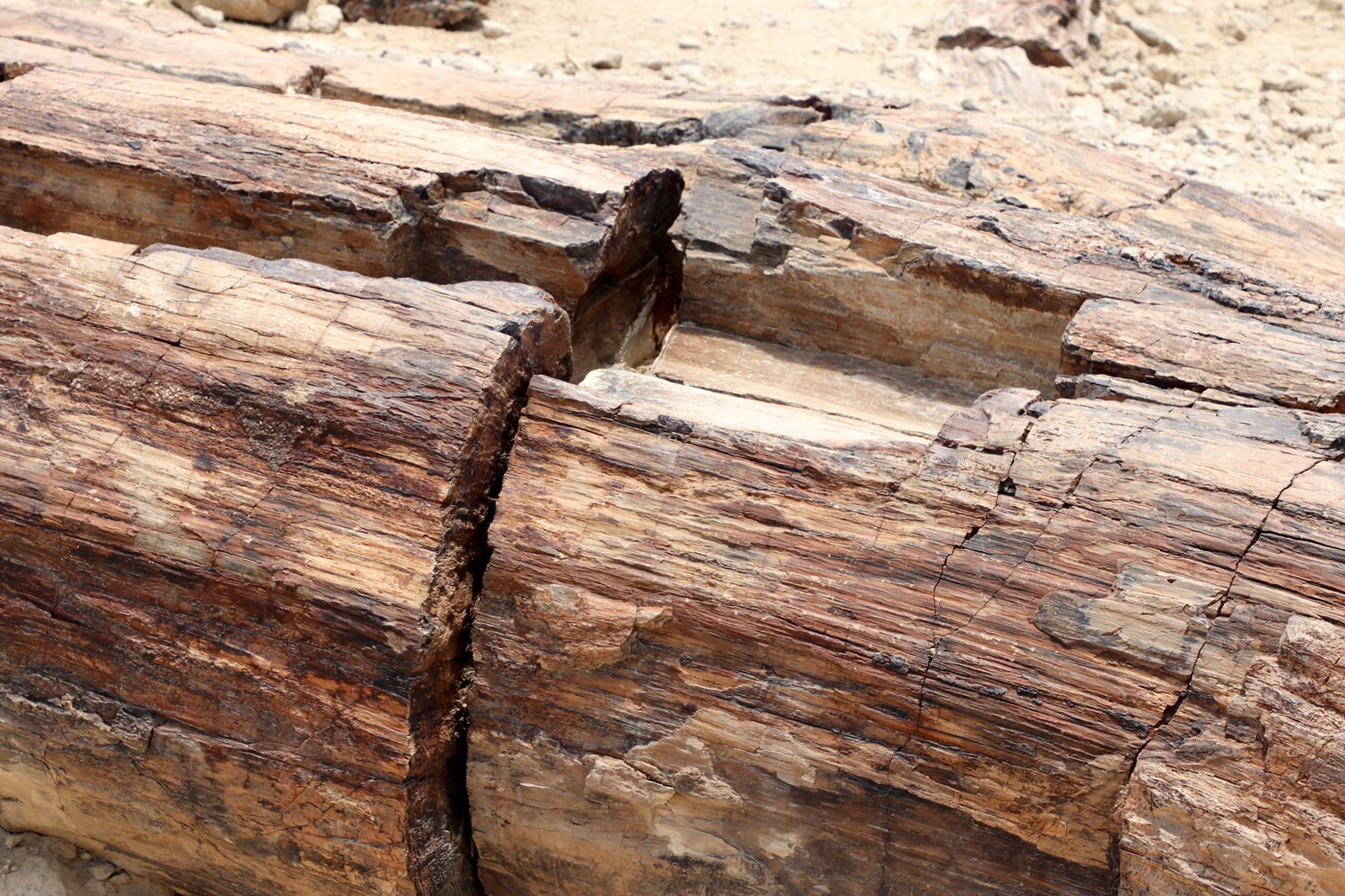 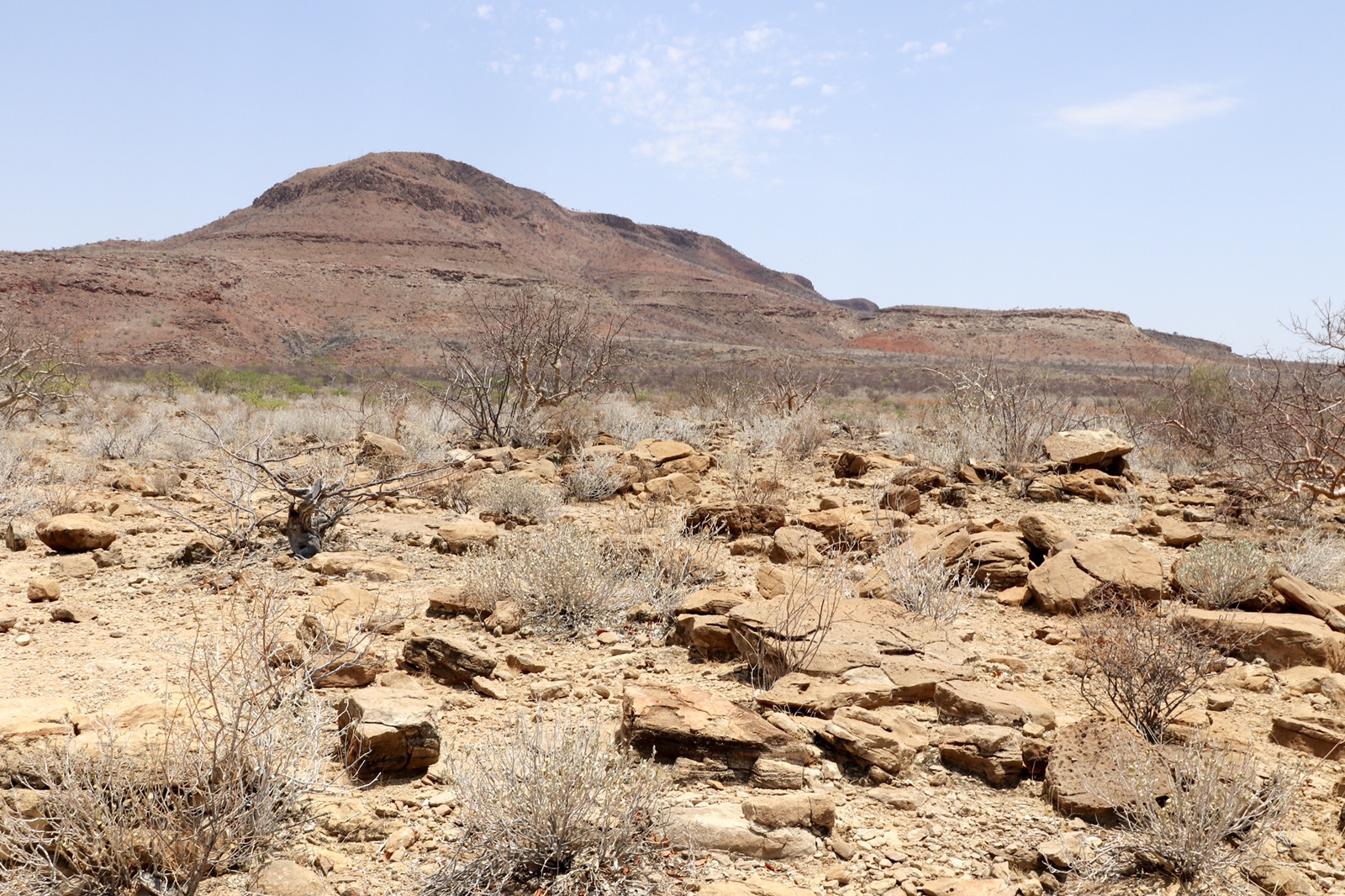 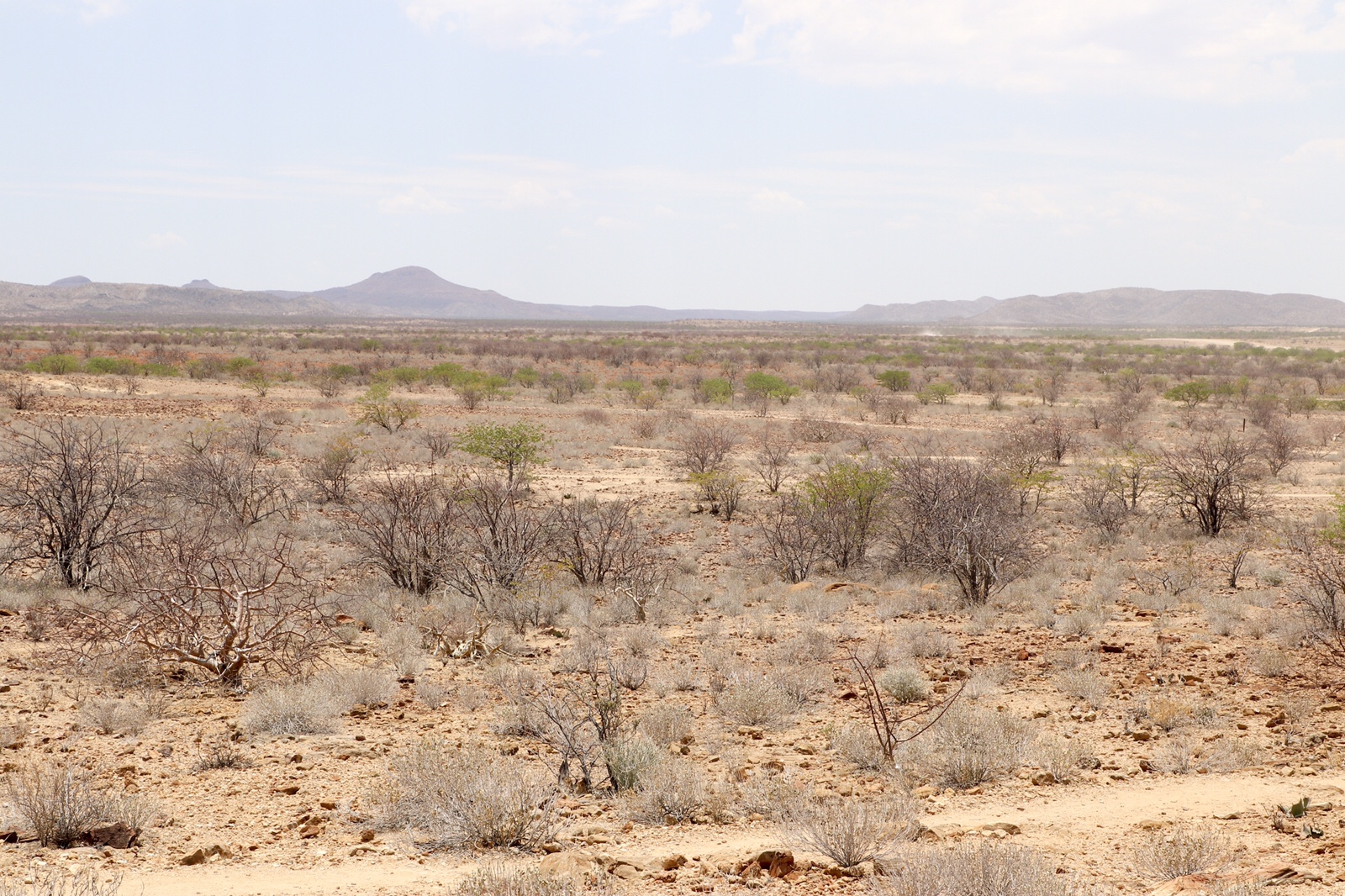 Then back on the bus for a few more hours.

It was now around 1pm. I was hungry. But we had another stop.

We were in the middle of lots of round rocks piled into large mountains. The area of land we have been driving in is the area of the damara tribe.

We were stopped at a damara living museum. Where the local people dress in local clothes and show us their traditional way of life. At least they were honest that it wasn’t real – rather than some places (like the masaai and amazon tribes) who pretend that is how they live. 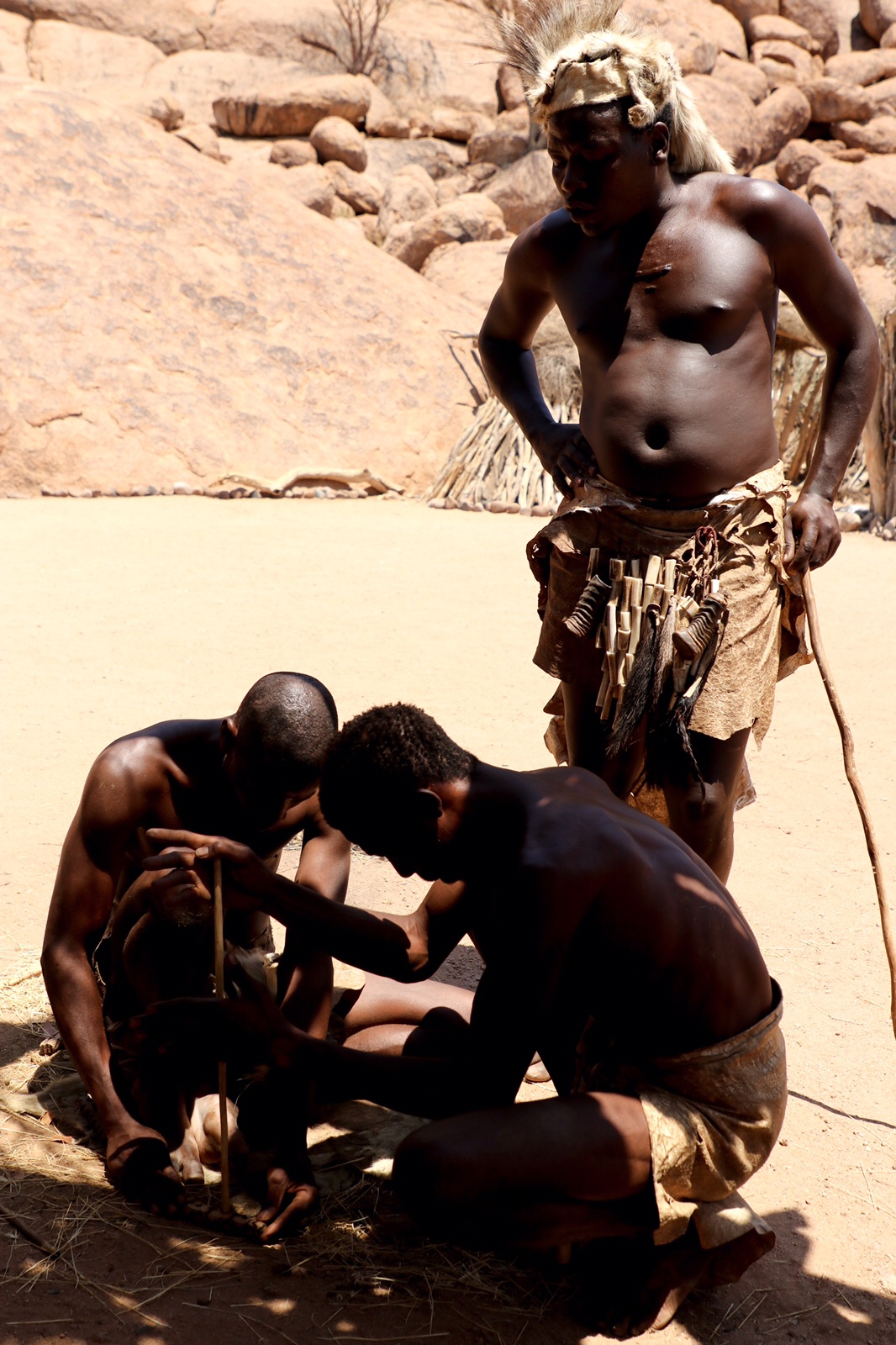 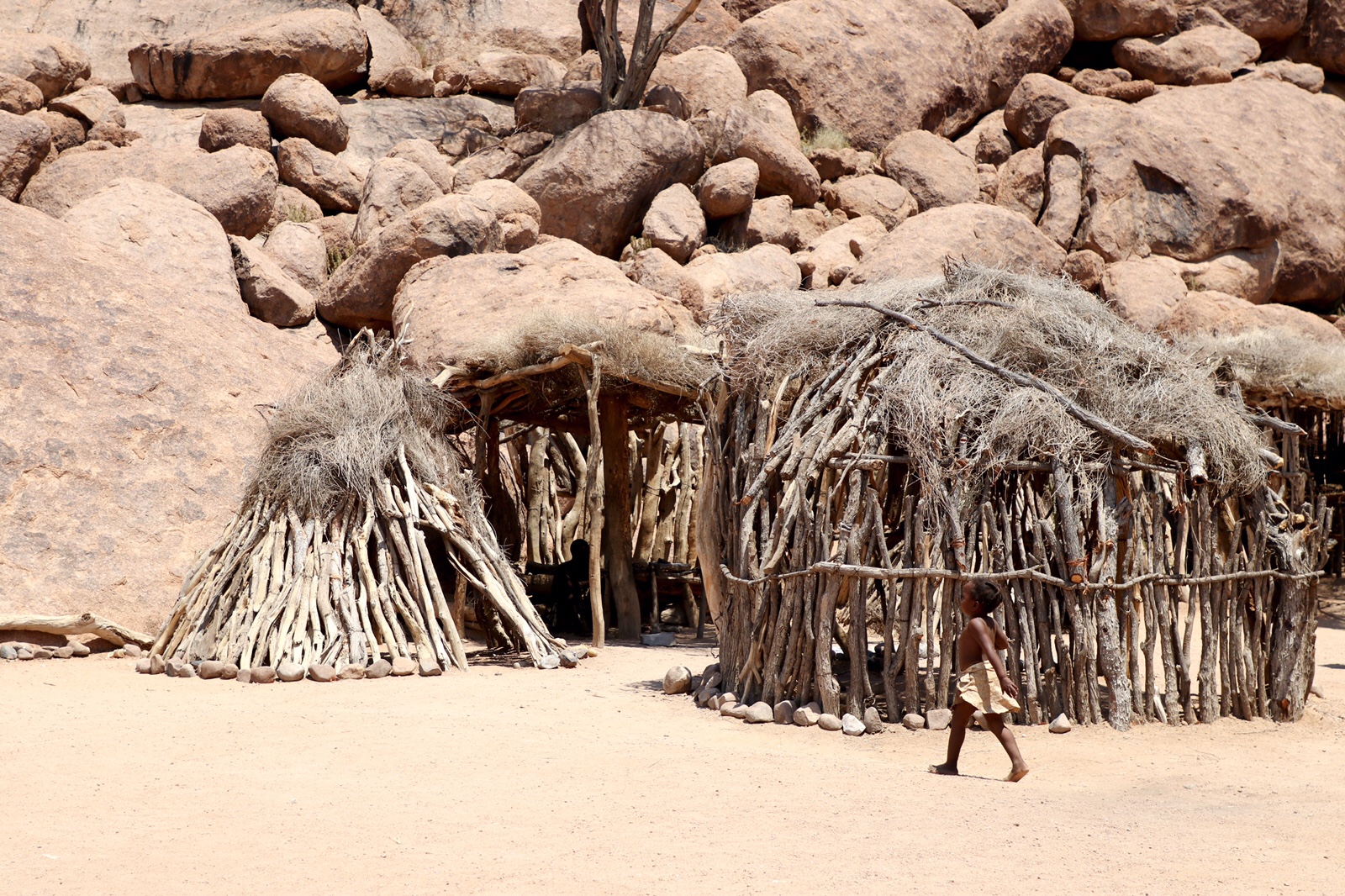 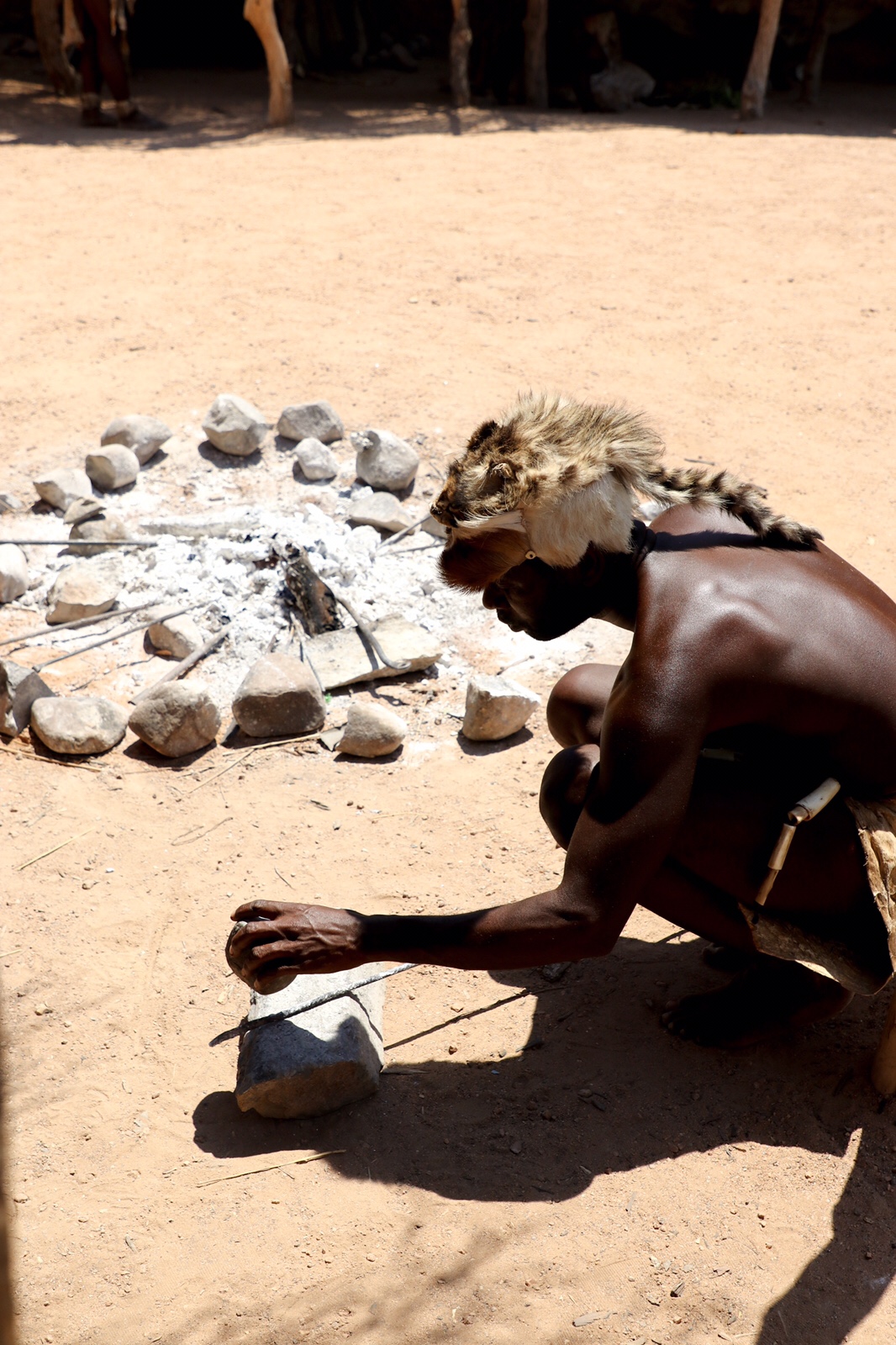 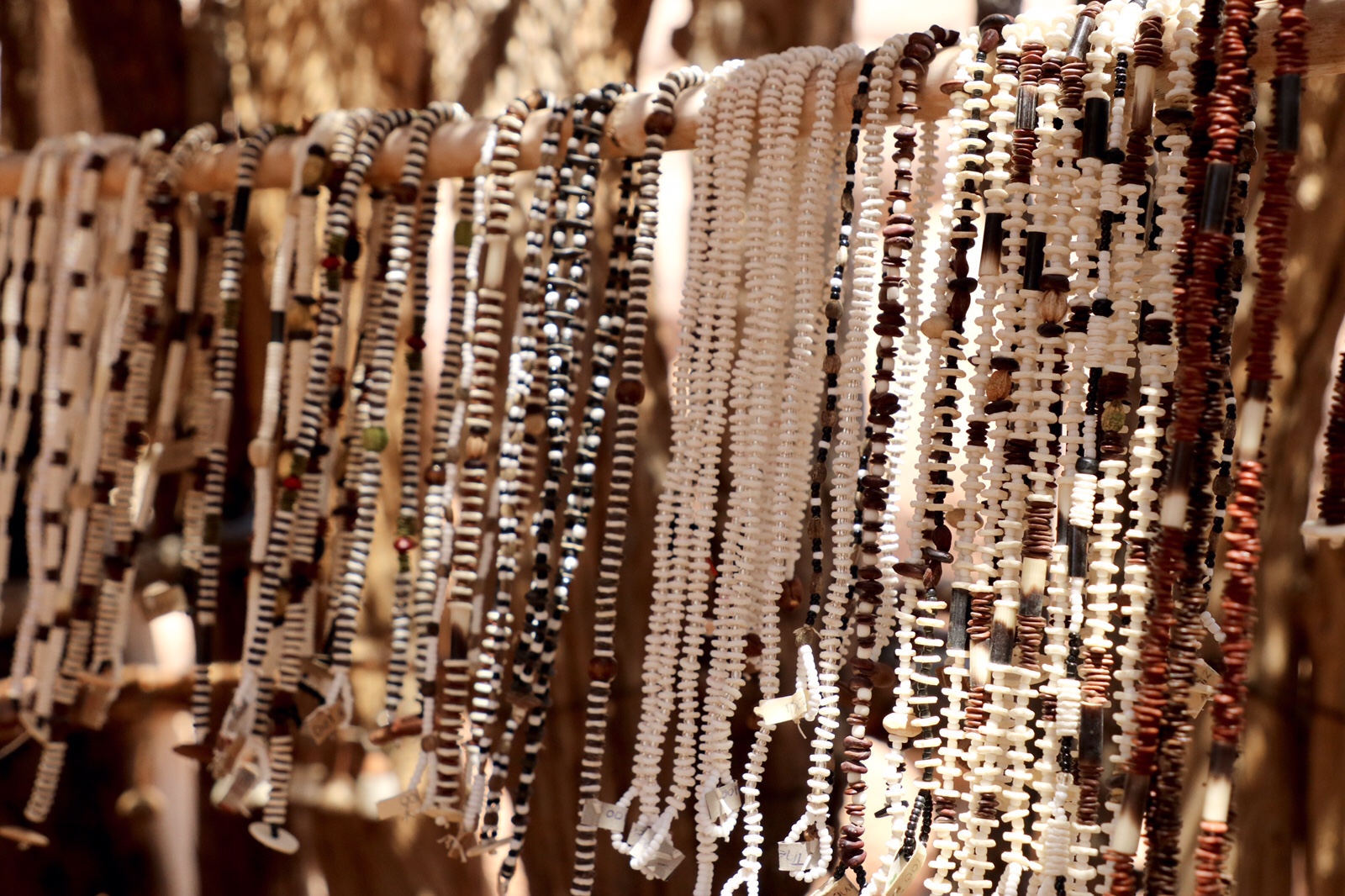 Our campsite was just a few minutes away from here.

Staying the the desert. Desert all around us.

The first thing to do – check out the toilets. We found one shower. An outdoor shower, with no lock on the door. And a toilet. With no door and no sink. Wonderful. And that’s what we had to share!

At 3.30pm, some of us headed back out and we drove through amazing rocky scenery to a nearby site which has rock carvings.

The rock carvings here at Twyfelfontein was Namibia’s first UNESCO World Heritage Site – one of the most extensive rock-art galleries on the continent.

We had a local guide. Then started our hike to visit the rocks. I hadn’t heard the briefing about wearing trainers. So there I was in my flip flops, climbing over rocks.

The rocks with engravings are scattered around in different places. Many lying upside down, or on their sides, as the original rock face has broken and fallen into pieces.

The engravings are estimated to be between 2,000 to 6,000 years old. They were cool – many giraffe, elephants, a lion, white and black rhino, springbok, birds and unusually a penguin and sea lions. This indicates that people travelled far as the coastline is 100km away.

We all walked up a hill just behind the campsite. It was made of a strange rock – almost like thousands of plates of slate packed together in rows. Once we reached the top, it was rather uncomfortable to sit on.

However the view was great. A wide valley below us, and another set of hills on the other side.

For dinner I had rice and sweet and sour vegetables. Was really good, again.

It was chilly. The coldest evening so far. So we put the flaps down on the tent and I slept in my jumper.