I was still asleep when my alarm went off at 4.40am.First time I’ve not woken before my alarmthis whole trip.

A quick uber to the airport and Iwas readyfor my 7am flightto Johannesburg. It was only a 50 minute hop up the country.

The transfer at Johannesburgwas a faf.My ticket had a different terminal listed to where Iwas actually supposed to be.Andpassport queue was long.

Spent my last rand on some random stuff.Then second flight of theday – to Mauritius.Because, why not.

It was a 4 hour flight. We flew right overMadagascar – great views.And great memories from twoyears ago when I wastravellingaround there.

When we reached mauritius, we flew right over the island. It was so pretty. Reefs along the western coastline, resorts giving way to small villages, then the mountains, with mountain-top lakes. 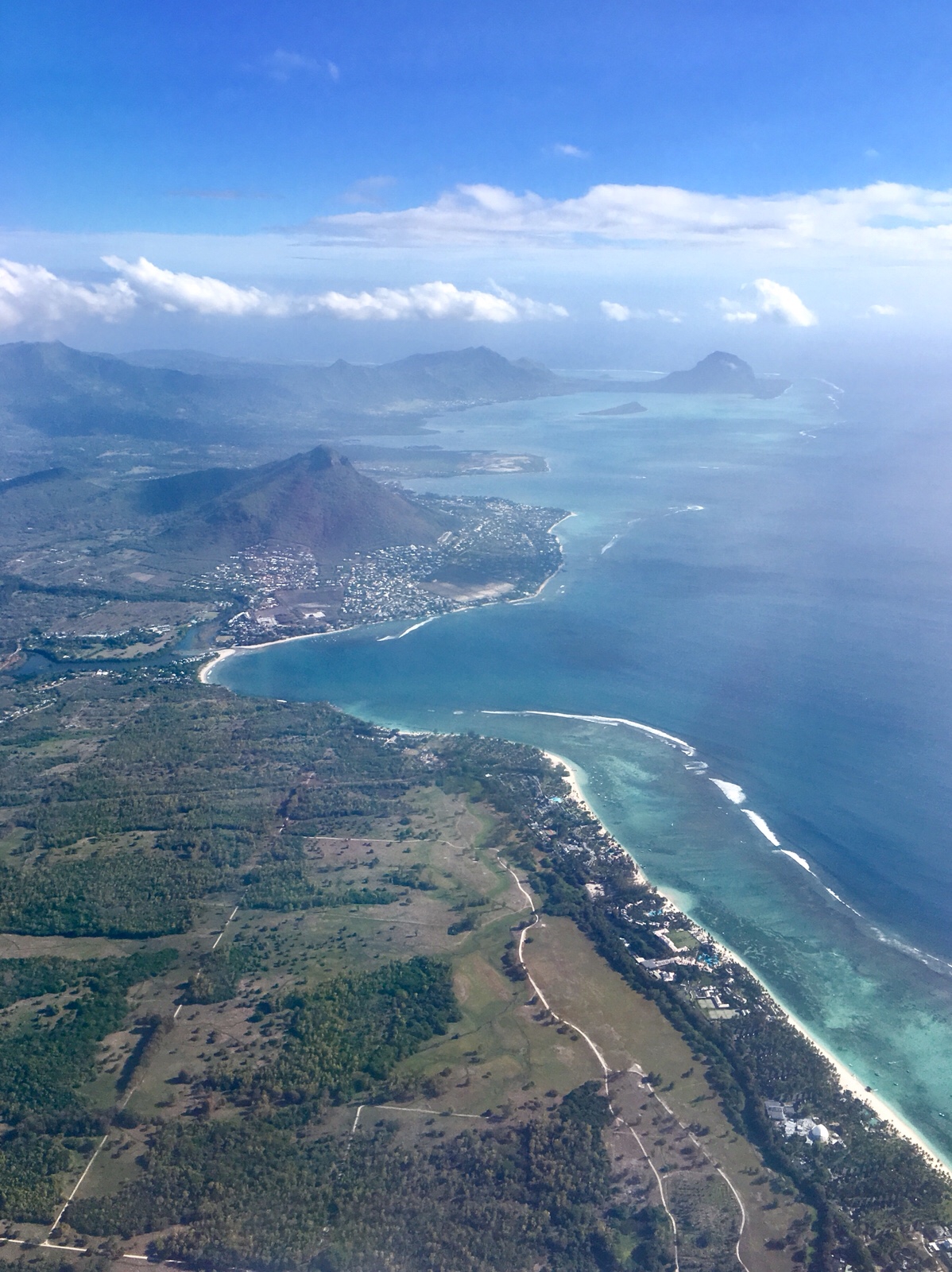 We landedat 4.30pm. Two hours ahead of South Africa.

I was lucky and was pretty much first off the plane. They were taking quite a long time per person on passports, then on health scanning. Asking me all about the countries I have been in the last 6 months to work out if I could be carrying a disease. Once they saw the Madagascar stamp, that was it for a while until I could convince them that was 2 years ago (the date was just a smudge).

Really that only took about 15 minutes. And my bag was already going round! Very quick getting luggage off!

Then I was stopped by customs. I don’t know why. Could be that I was on my own (and most other people are couples). Or that I look scruffy (not carrying my prada bag, like the woman next to me). Or that I had too much baggage.

But they took my passport away. And asked lots of questions. Looking through every single page of my (very full, but only 4 years old) passport. After scanning my bags, they were disappointed. But reluctantly let me go.

And my taxi driver was waiting.

It was a really pretty drive. From one side of the island to the other. Through some small villages which looked very like Bali. Through sugarcane fields – the main crop here. Past impressive mountains. And rainbows in the sky.

The drive took over an hour. It was just gone 6pm when we arrived at the hotel.Just off theMont Choisy beach.A really modern cool hotel.Although a bitdisappointing thatIhad paid extra for a sea-view room.And my room isn’t verysea view. 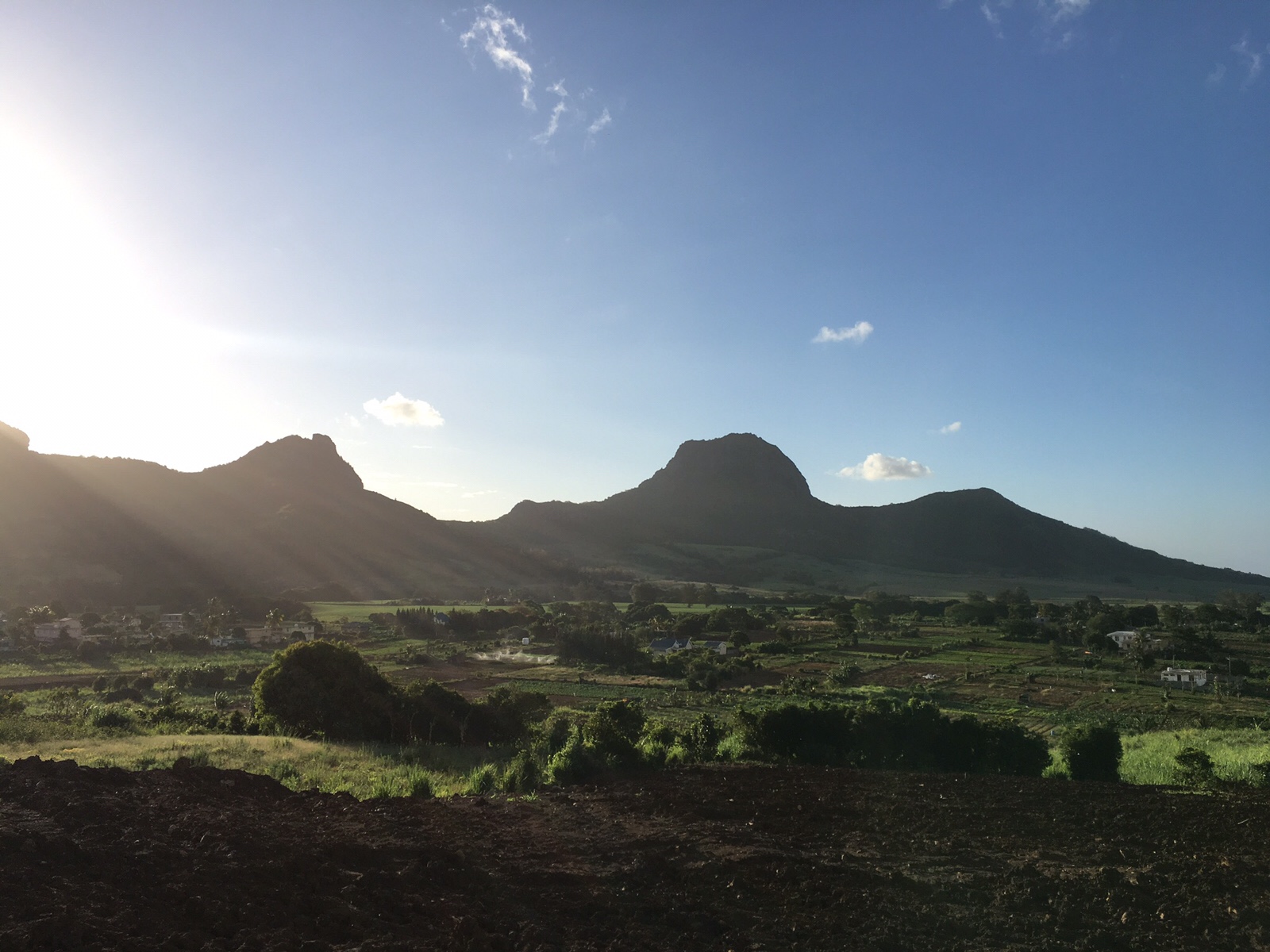 After dumping my bags Iwent straight out.Sunset time.There is a small Hindutemplearearight next to the hotel, on the beach.And the sky was a prettypink.It wasnice.

For dinner, Iate in the hotel.There was nothing veganon the menu.So Ispoke with the chef and he said he could make me a local curry.Sounded good.And it was.So good.Like no other curry I’ve tasted before.Came with a lentil soup, rice and a tomato salad.

I was picked up just before 8am and the dive centre was just a short drive away.

I was expecting tropical waters.And they kind of were.But the guys still advised Iwore my 5mm wetsuit.Shame.I was looking forwardto no-wetsuit-diving. I never wear a wetsuit if Ican get away with it….

We had a busy boat.Too many divers – so we had kit all across the floor which was awkward. But Ihad a good group and we went in last, once allthefaffing around had happened.

The water was so flat. No throwing up today.

We had an hour surface interval on the boat. Quite a lotof people weren’t doing thesecond dive, so we dropped them back offat shore beforecarrying onto our next divesite.Allthe divesites are within a 20 minute boat driveof the pontoon.And this is apparentlythe best area of the island to diveat.The second dive didn’t look like much.Sand and a few lumps of coral here and here.But there was so much more – left scorpionfish, stone fish, pipefish, some morays I’ve not seen before.Ok, so not loads. Better than Iwas expecting diving to be here. 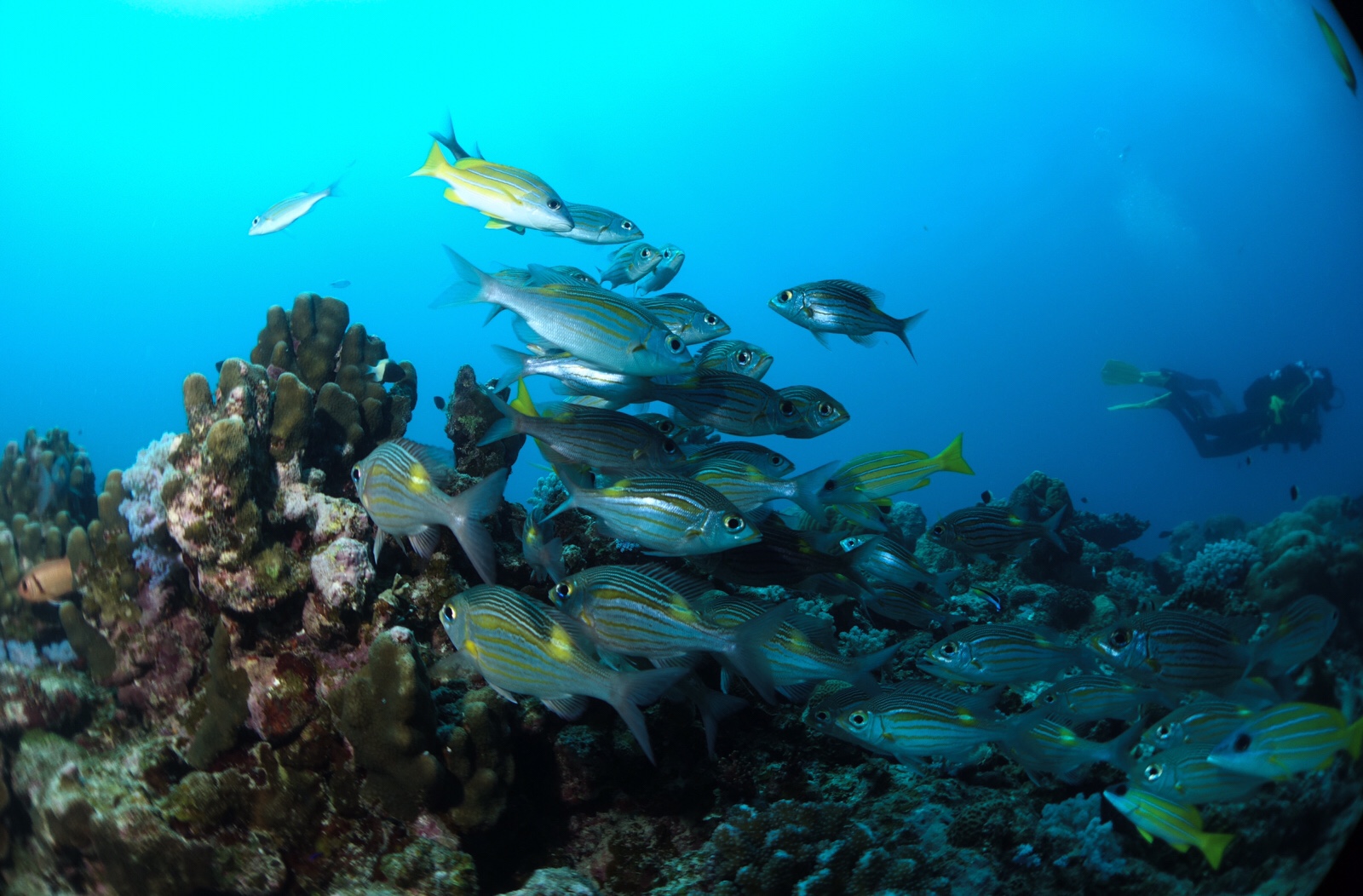 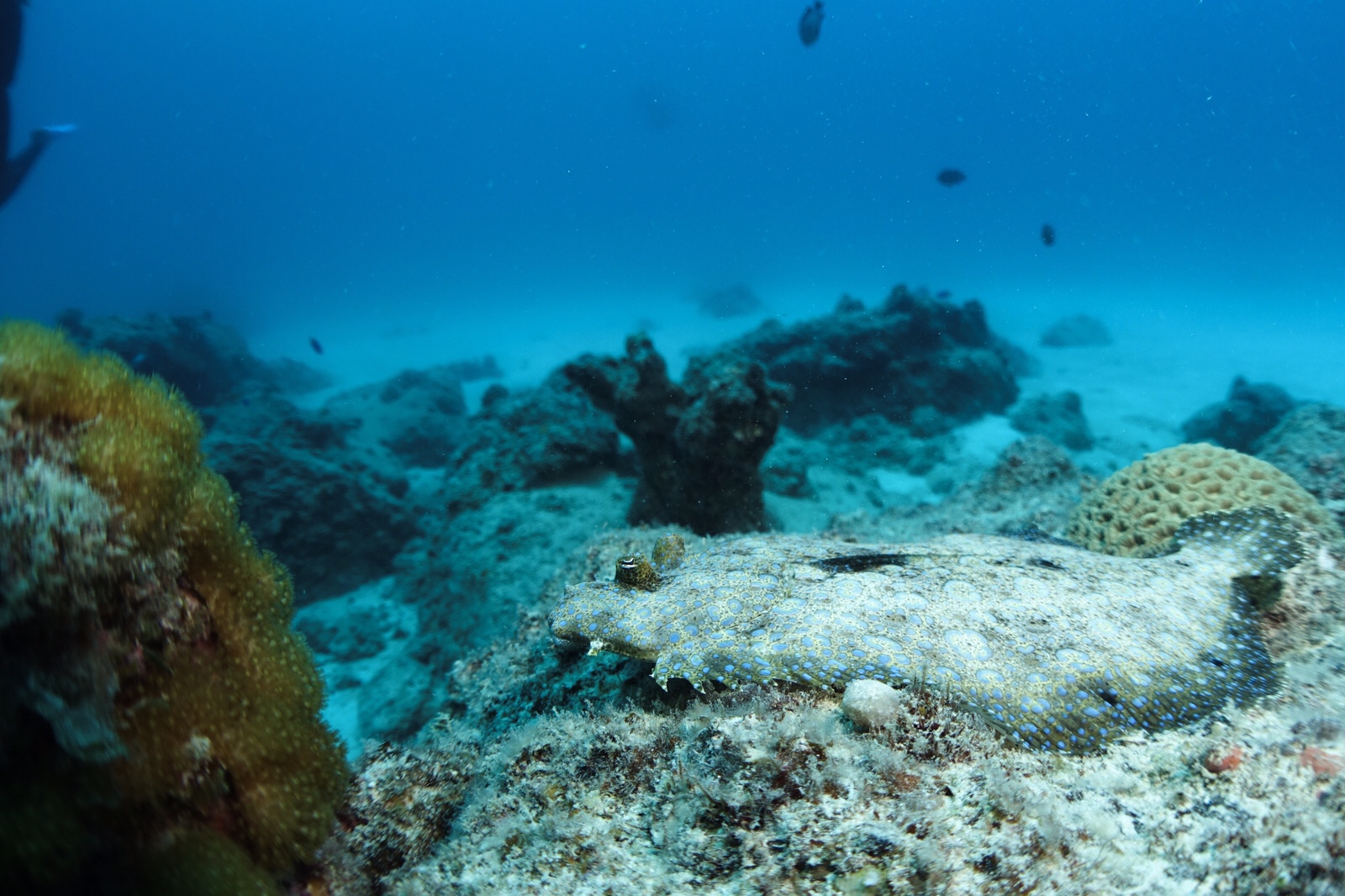 Whilst I wouldn’t put it anywhere near the top of my favourite diving places, it was nice to have a few very easy dives of just floatingabout.We were back around 1pm and after washing some kit, I wasdriven back to my hotel.Handily, right next door to the hotel, just off Mont Choisy beach was a little fruit stall which was also selling samosa! I bought some samosa (£2). And a pineapple (£1 – quite expensive!) and bananas for later. Good lunch! 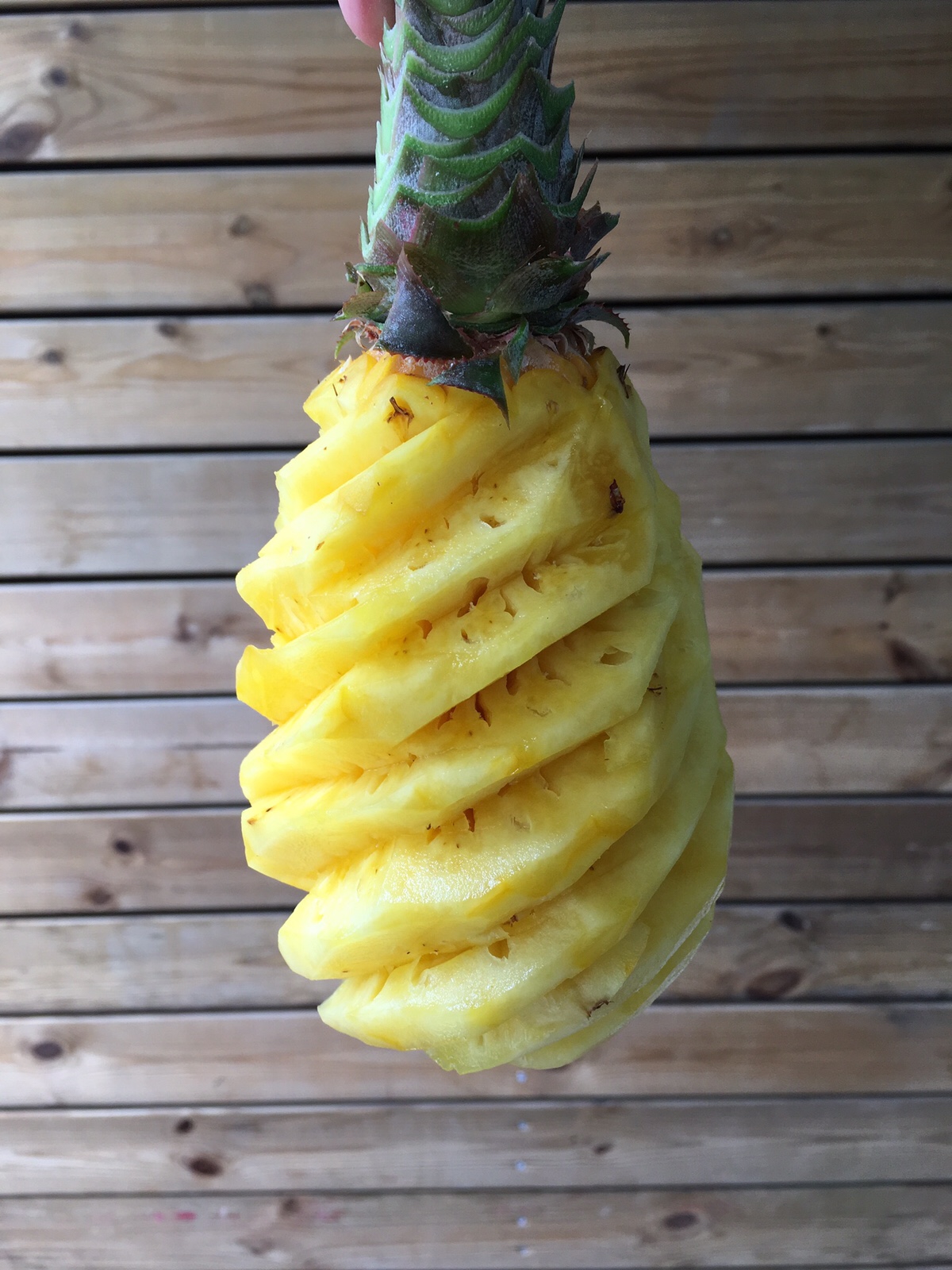 I also went for a bit of a walk down the beach. It was nice. A few Hindu statues dotted around. And absolutely no people down this end.

I wanted to go to the botanical gardens. My options were a bus (very cheap at 30 rupees – but not direct and seemed a bit of a faf). Or a taxi. Which even after bartering, was expensive.

But I had no choice. I had to get a taxi. It was a half hour drive, through sugarcane plantations and forest.

These gardens were the first botanical gardens in the Southern Hemisphere. They have around 650 species of plant. It was cheap to go inside, 200 rupees (£4). And nice to wander between all the large different types of palms. There were a few ponds – one full of white lotus flowers. And the more famous one – full of giant lily pads. But these are not endemic to here. They are from the amazon! 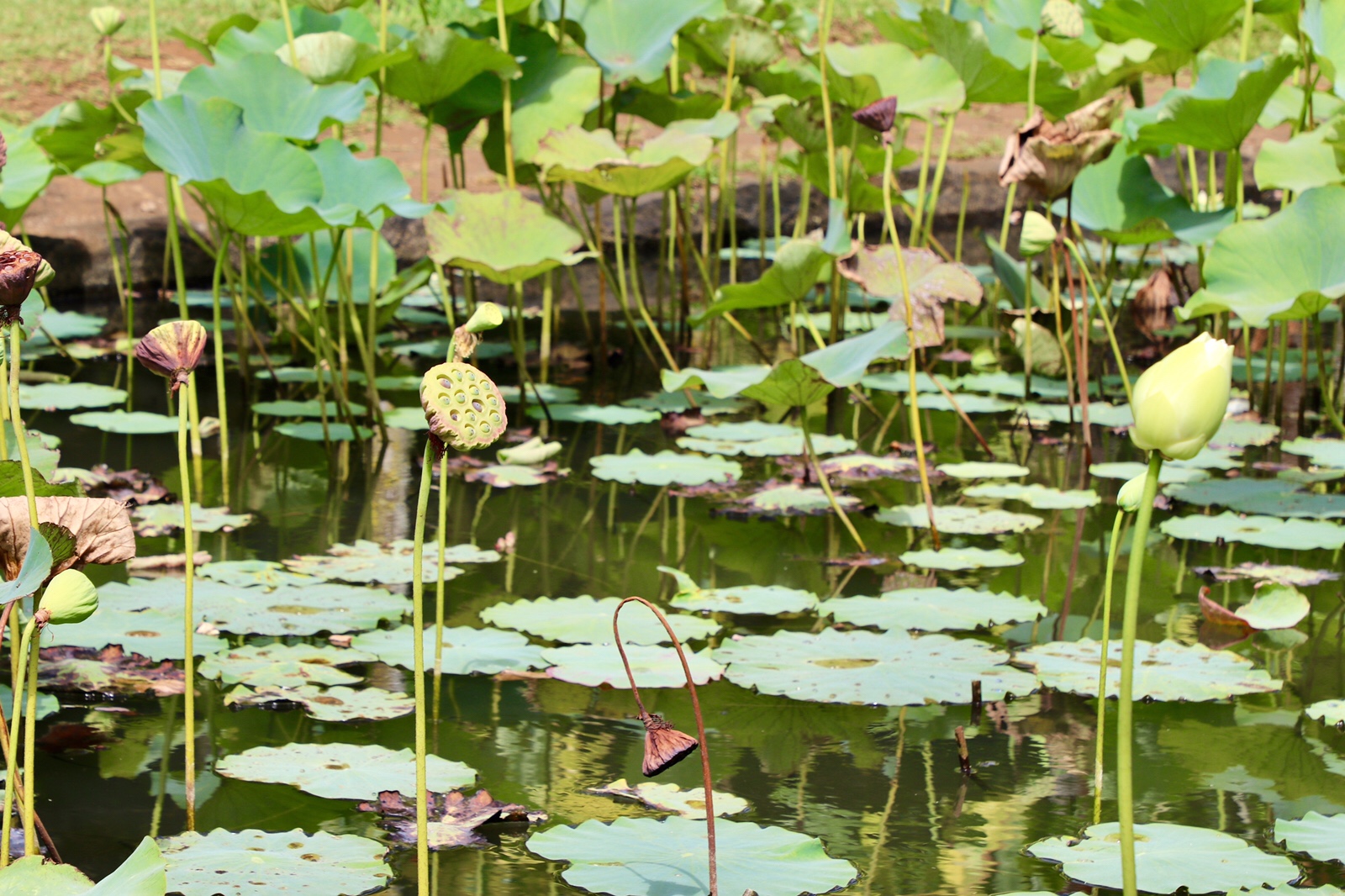 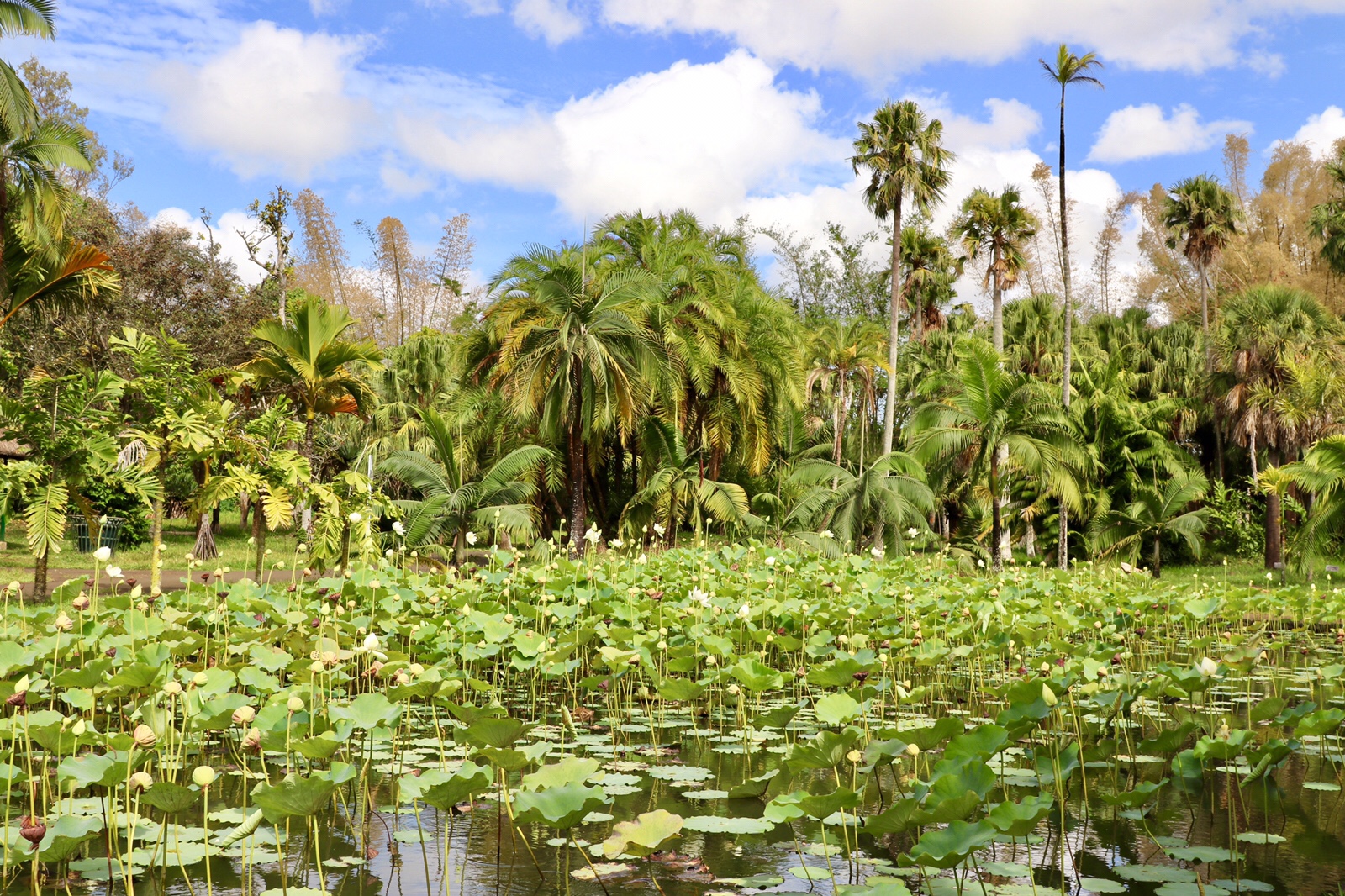 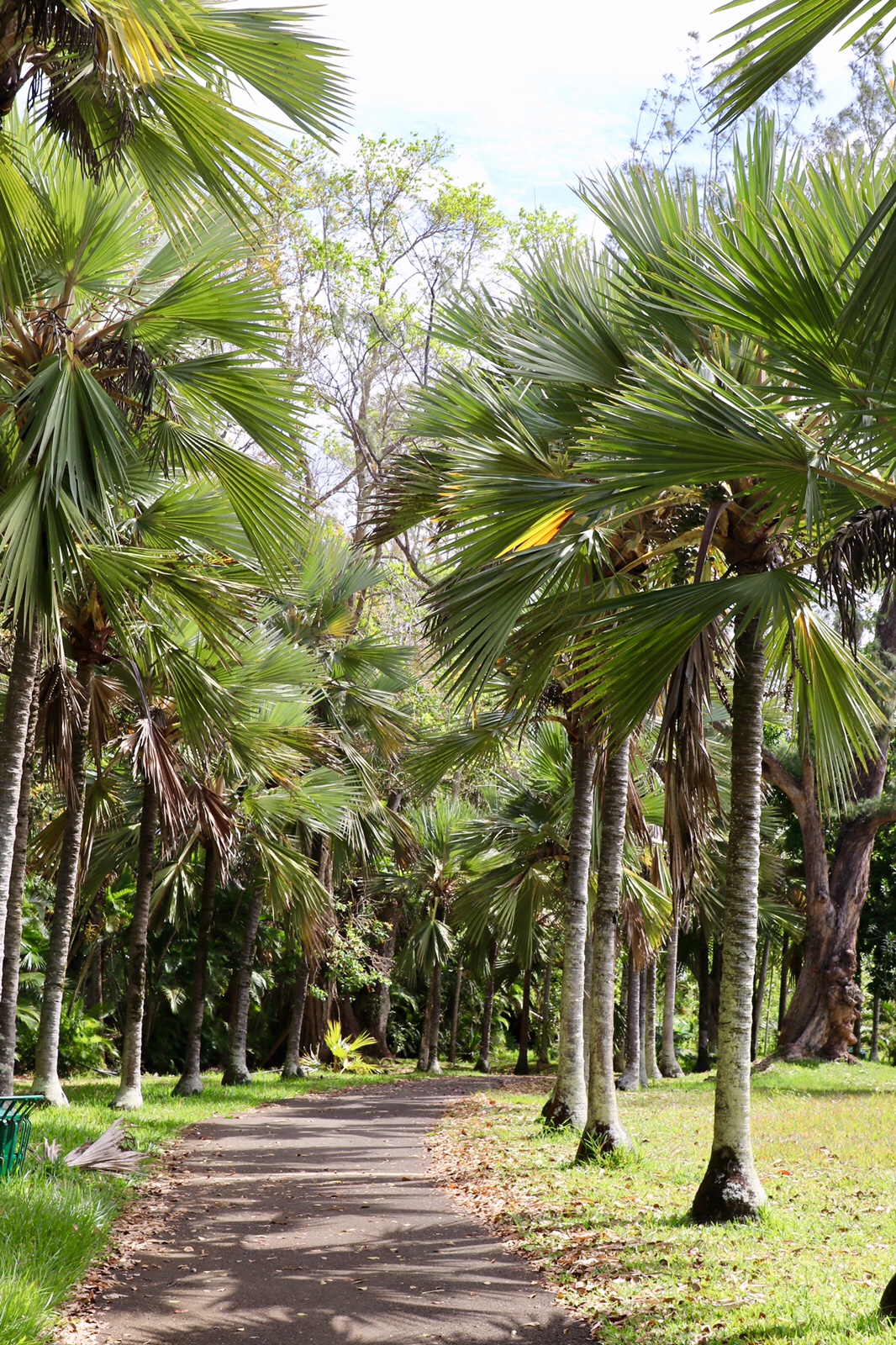 What surprised me was the lack of flowers. Basically none. Just lots of trees and palms. Whilst nice, not the best botanical gardens I’ve been to.

I was reallyexpecting not to like this island.I never go to ‘holiday’ typedestinations. But it has surprised me.Maybe it’s justthe areas Ihave been, but it doesn’t feel too touristy or tacky. It’s very ‘local’.

Once back at the hotel, I sat at the beach for a while.

There was no sunset, there was too much cloud. So it just got dark.

For dinner, Iate at the hotel restaurant again. With the chef making me specialfood.Again.He said it was going be local Mauritiusfood and thatit was lentil ‘meatballs’.What he meant by thatwas falafel in a tamarind curry sauce. So good.

Off diving again. And again they picked me up. Handy!

The first dive was meant to be a 40m dive. But none of us had enough no-deco time. So didn’t end up going beyond 30m. It was a cool area. Lots of big rocks, covered in pretty sea fans. And small schools of fish hanging out around them. A very large scorpion fish and a few moray eels. But nothing else too exciting.

Then it was raining. So we all sat on the boat, trying not to get too cold for the hour surface interval. Shame as today was supposed to be my beach afternoon.

For the second dive, we went to a wreck. All wrecks have been purposefully sunk here. It was cool. As the visibility was good, you could see quite far around it. We also swam inside one small section. I don’t normally like wrecks (or going inside). But this one was fine.

Once we were back up, it was almost sunny again! 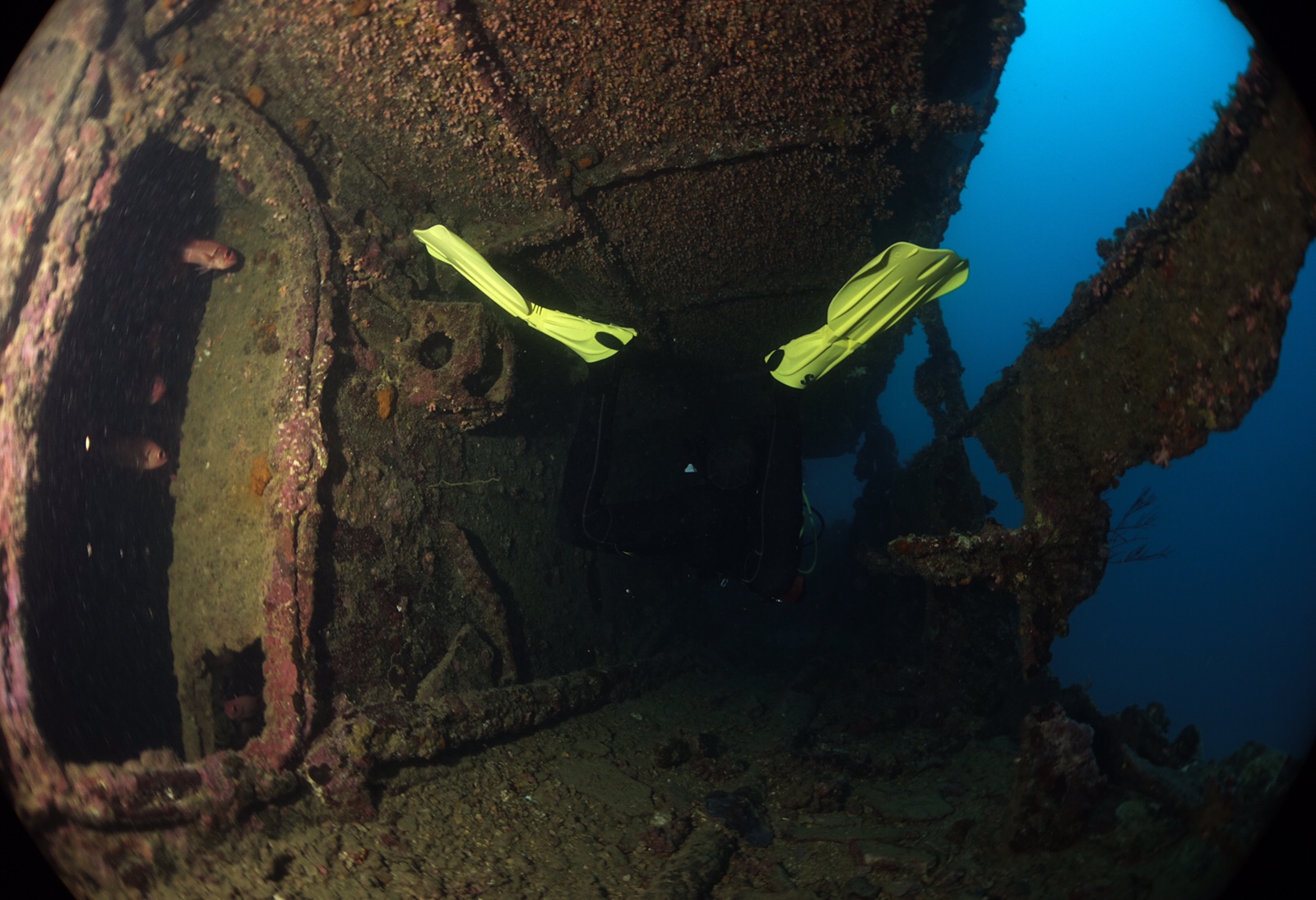 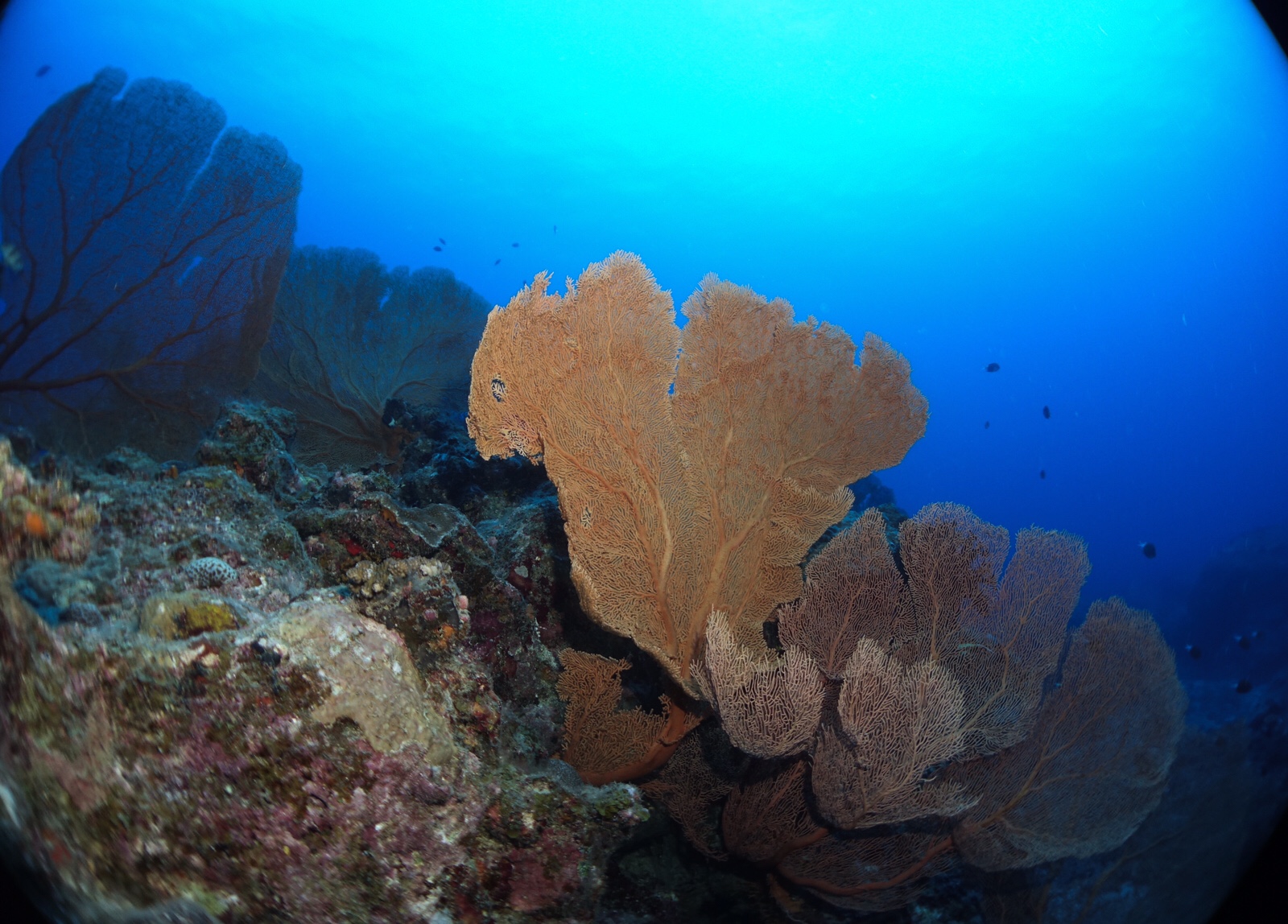 I washed all my kit and put it out in the sun. Hoping it would dry.

More samosas and pineapple from the stall next door.

And the rest of the afternoon, I lazed around. sat by the pool. Walked down the beach. Then went out to watch the sunset.

There was a creole festival happening today. Not too far away. I walked up to have a look – a large stage with music and dancing. I didn’t stay too long as I didn’t want to walk back down the beach in the dark. 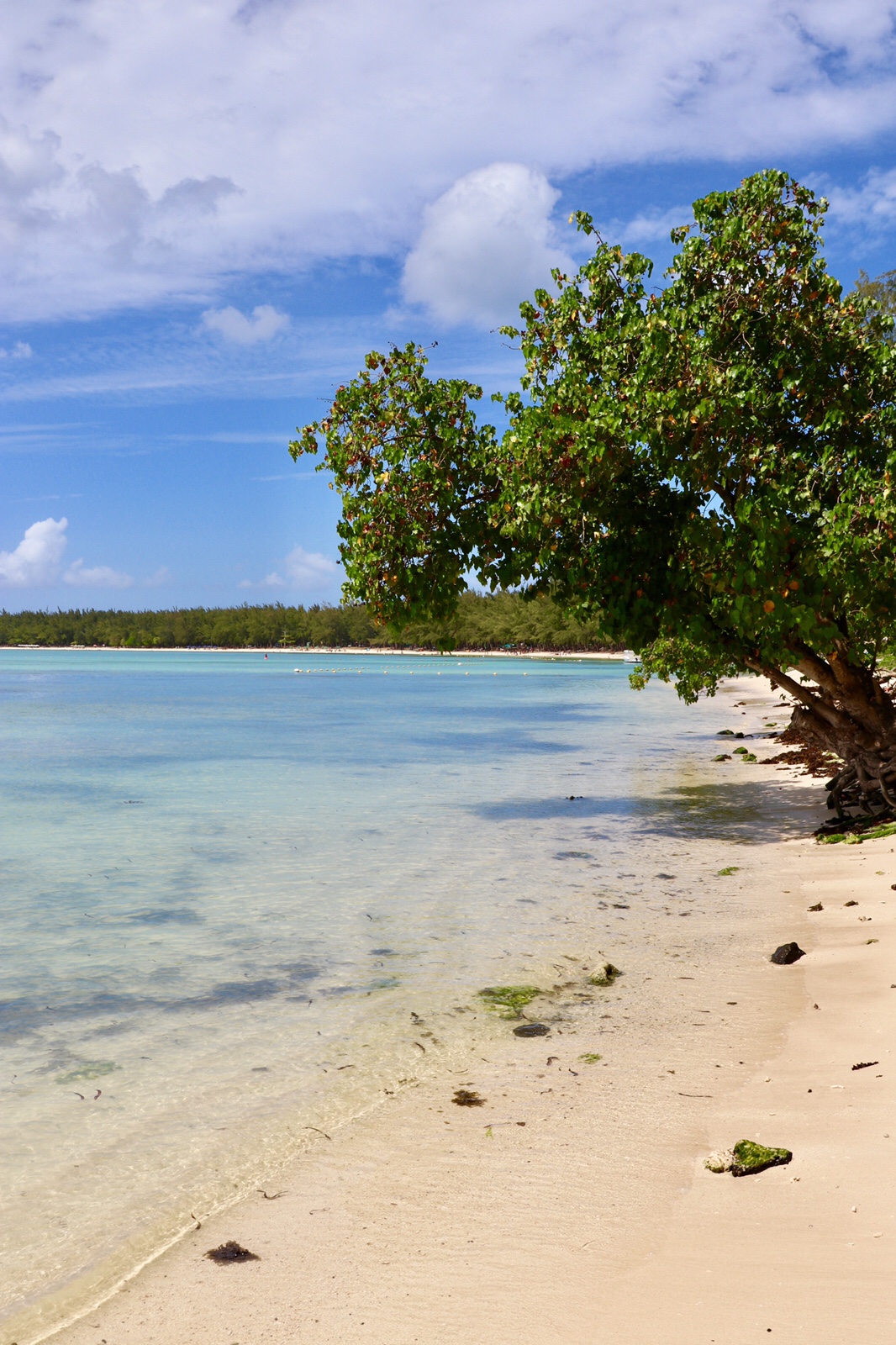 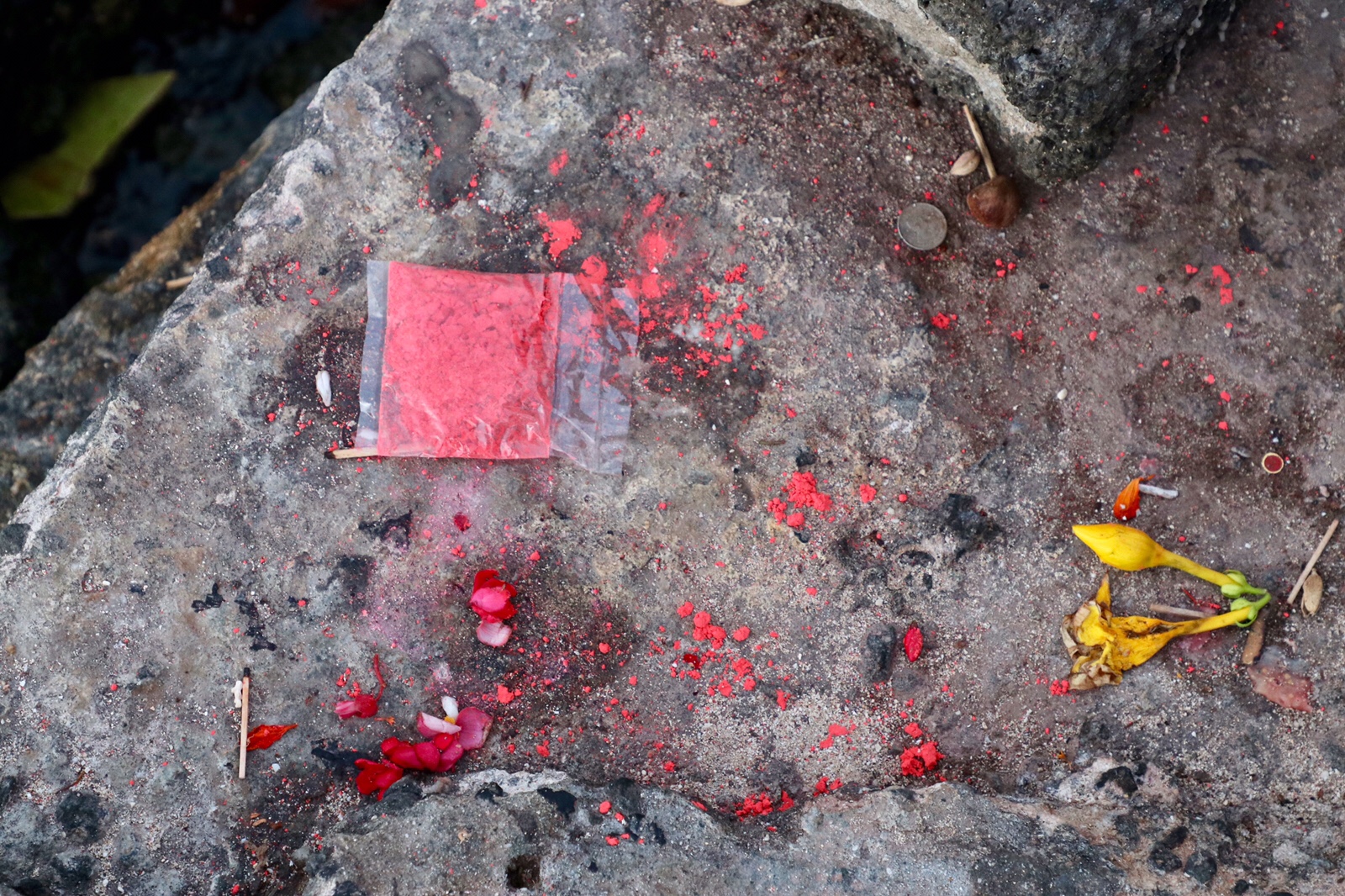 I had barely sat down for dinner and theserver told me that the chef had already organised somethingfor me.Wow. And again it was delicious. Potato and vegetable balls in a tomato curry sauce. So good.

Sitting by the pool, there is a continual waft of incensefrom the temple area next door.At 11am, Iwas pickedup for a day trip around theisland, before being dropped at the airport for my flight home. 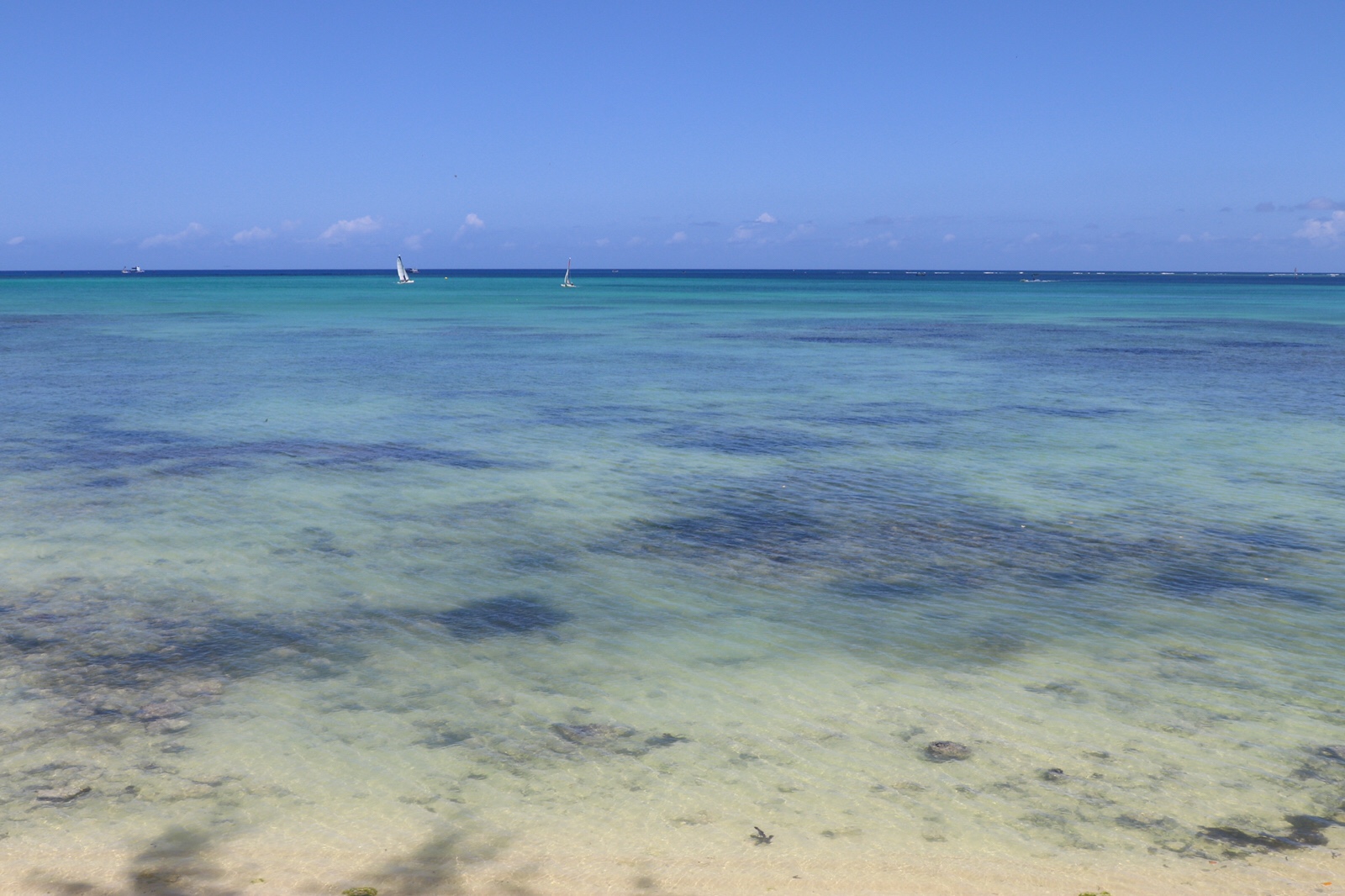 We drove back through sugarcane plantations and small villages.

Then we drove through the capital, Port Louis. It didn’t look too exciting. A large port. A big bus station. A palm tree lined street, full of banks. And all the markets were closed as it’s Sunday. We stopped briefly just to use an ATM before continuing out.

Further south, through the neighbourhood of Flic en Flac. Lots of fancy houses here. Apparently this is where the rich people live! The driver kept trying to take me to shops. I had already said I didn’t want to go shopping. Particularly for model boats. But he went by them all anyway. And luckily they were all closed.

We stopped off at a viewpoint of Trou aux Cerfs, a dormant volcanic crater which is 100m deep and has a 1km circumference. It was completely covered in forest.

It was now around 12.30pm and we stopped for lunch. Apparently there aren’t many options around here. But we stopped at an Indian style veg place. It was crazy expensive (750rupees – £16!!!) for lunch. But there wasn’t really any other option. It was good. But just too expensive. Everything was served on a banana leaf, a selection of curries – aubergine, tomato, spinach, banana, squash, a random local vegetable, bean curry, rice and some pancake-style breads. There was even a dessert of cardamom sago served with a poppadum.

After lunch we headed to the Black River Gorges. This is the largest national park on the island. There are trekking routes, but no time for that. Instead, we just went to some lookout points which were a short walk away from a car park. Nice views across the valley, small waterfall and monkeys. I still don’t like monkeys – these ones kept hissing when people got too close.

Then we drove round and round, winding roads, to the small village of Chamarel. Small little colourful houses, some had turned themselves into small cafes. Very cute.

There is another park here. This one had an entrance fee of 225 rupees. For some reason I only paid 175 and I’m not sure why.

Here there was a long waterfall, with a 95m single drop. It was pretty.

But what the area is most famous for – the Chamarel Coloured Earths. The soil here is very rich in minerals, so has lots of different coloured stripes running through it. It was a nice walk all around the designated ‘soil’ area! Nothing will grown due to the minerals in the earth. 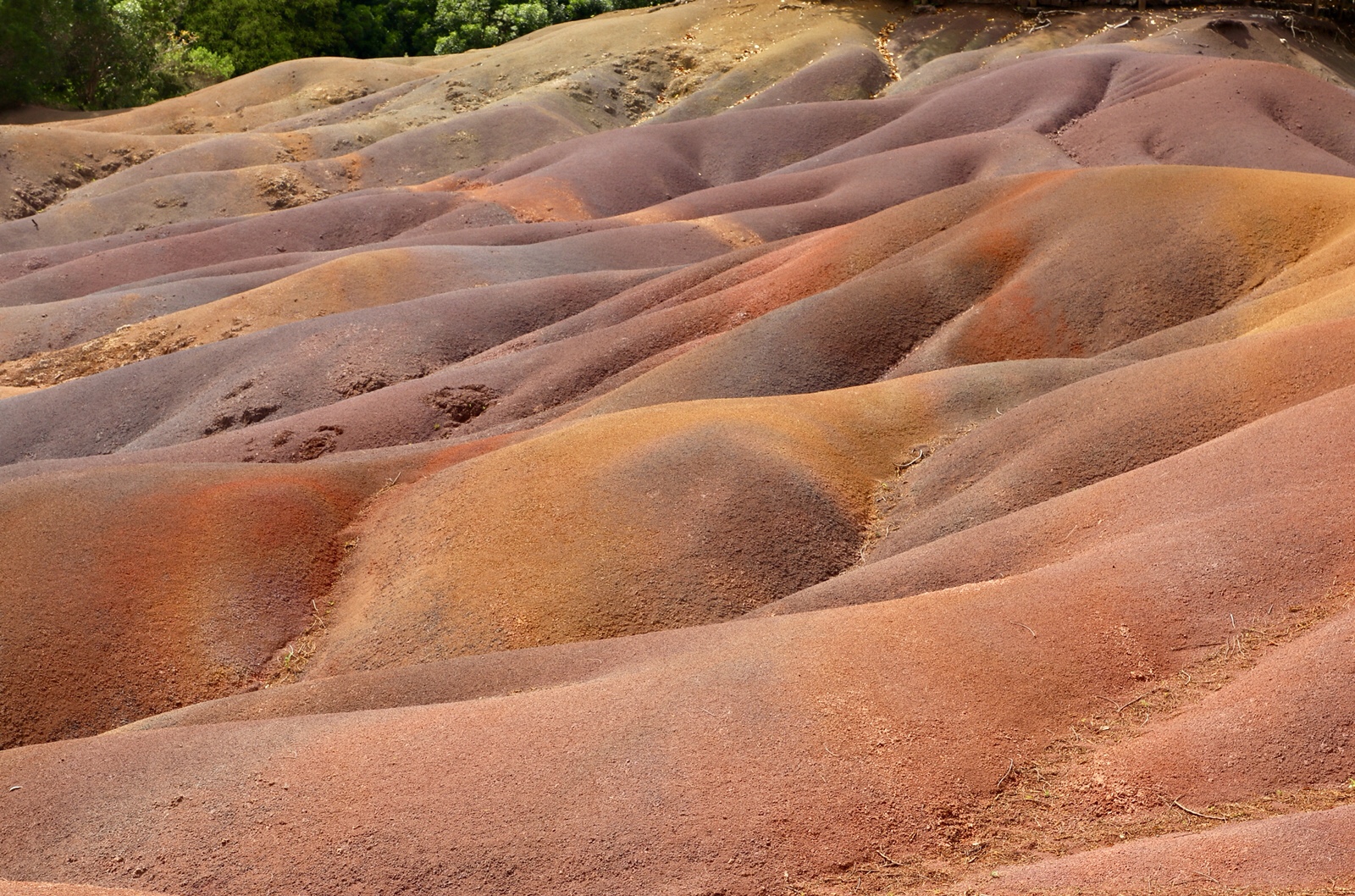 Here they also had a few giant tortoises kept in an enclosure. They aren’t native. Seemed a bit mean. Tortoises can walk miles and miles. These didn’t have far they could go.

The last stop was a temple complex.Lots of small temples and statues set around a large lake. It was pretty. Full of incense and flowers. Just next to the lake were huge statues of shiva and his wife.

On the drive towards the airport, we went past tea plantations. This is the only area on the island where tea is grown. The rest of the island is largely sugarcane. 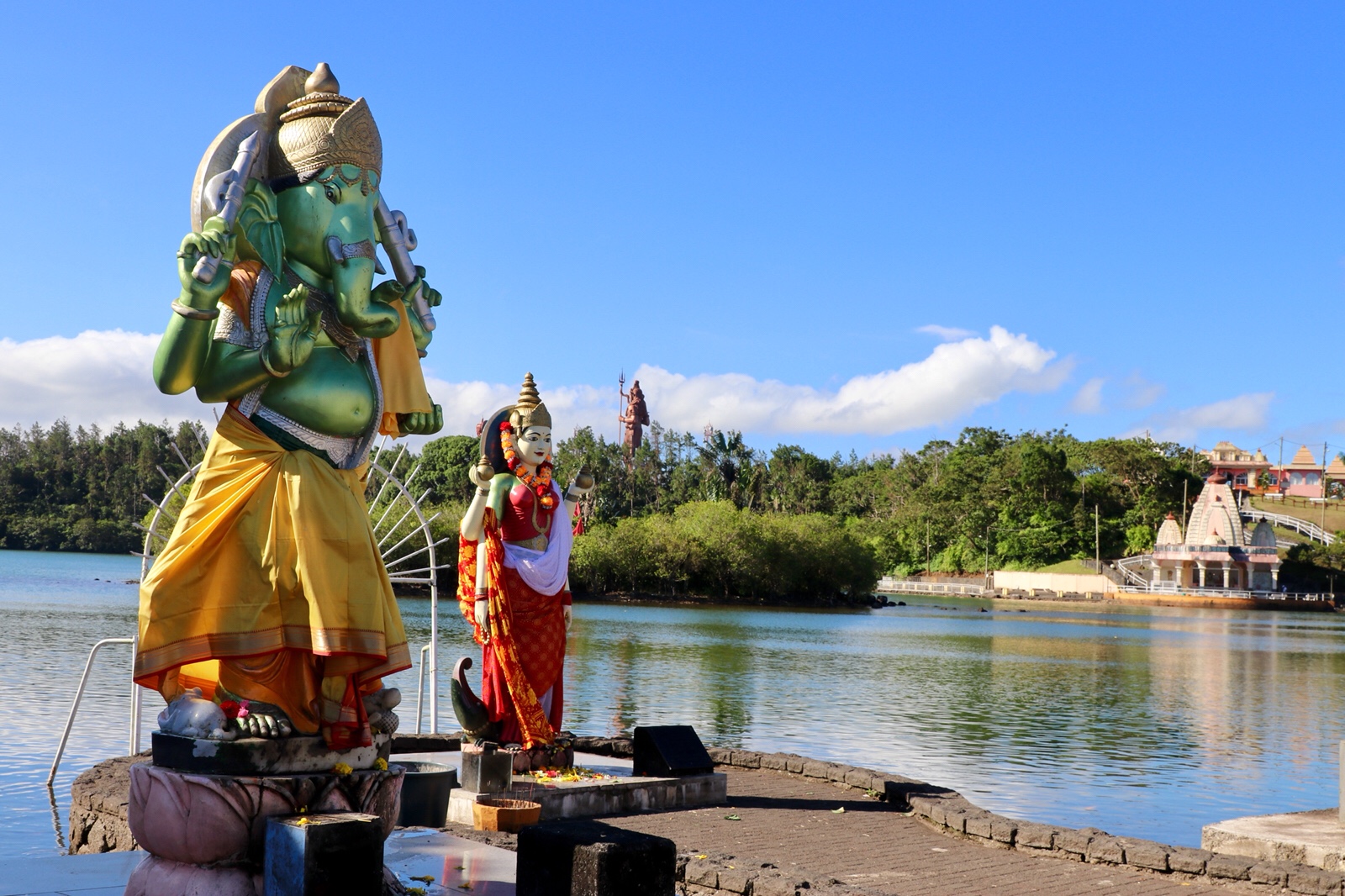 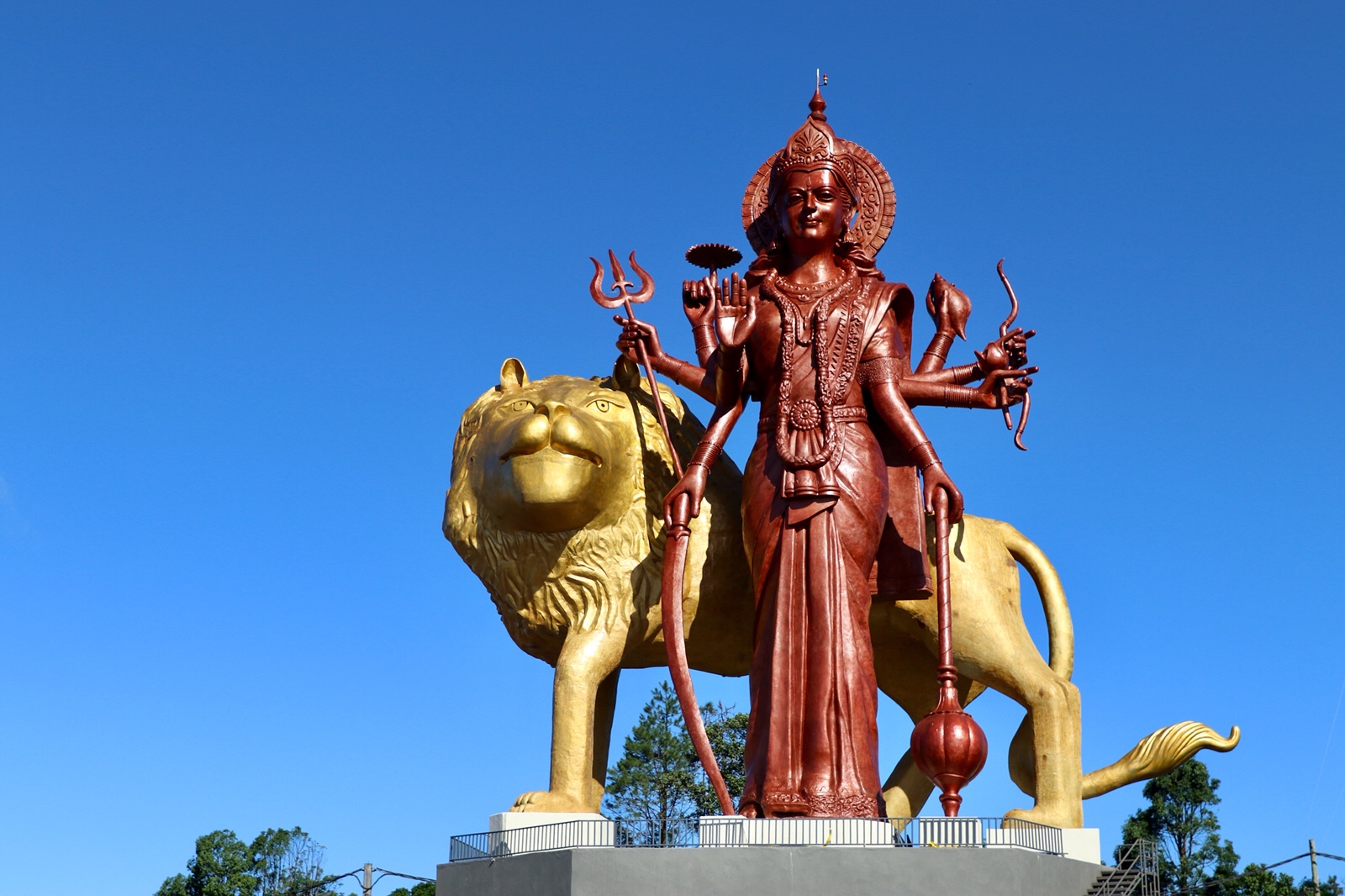 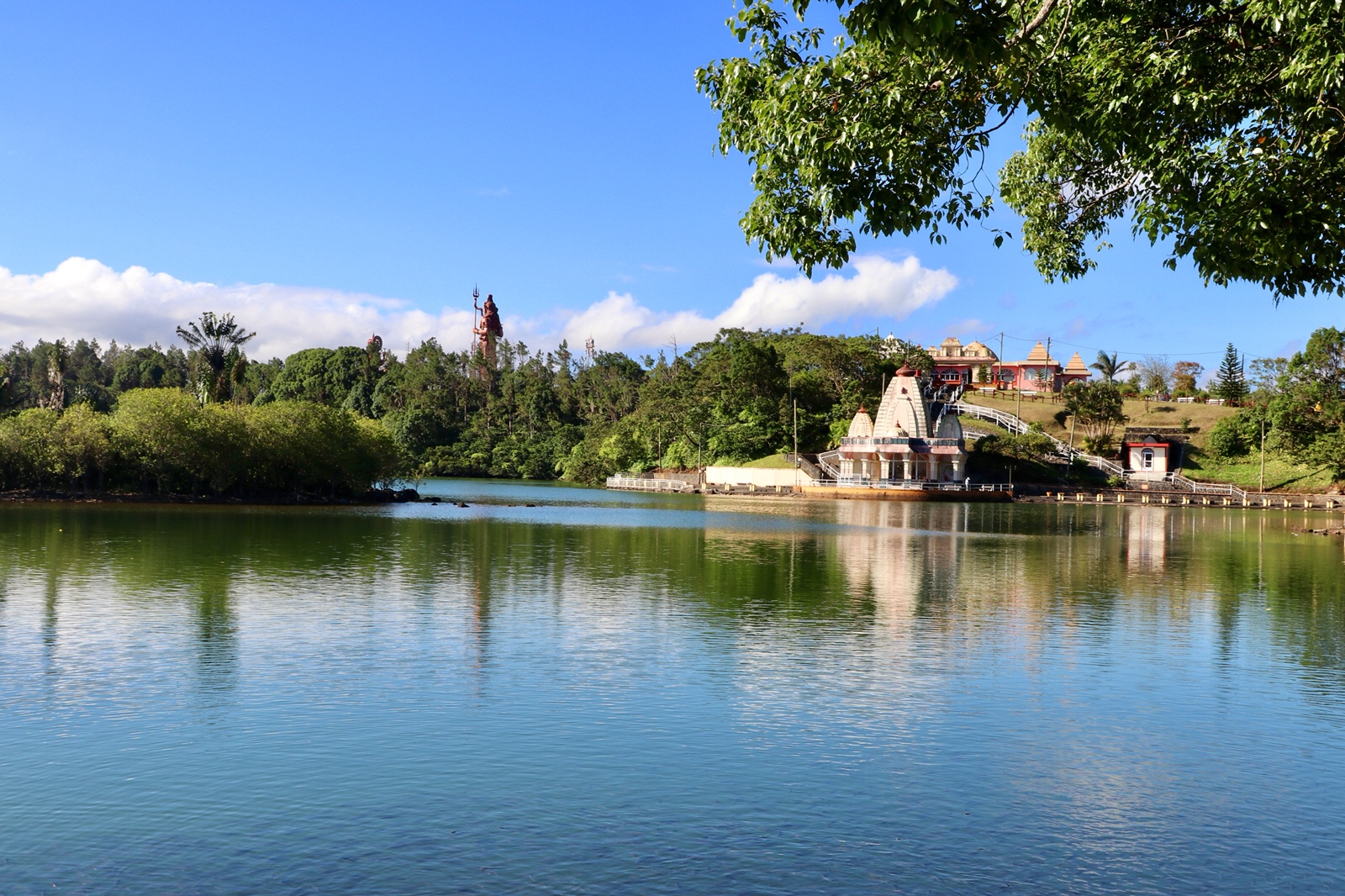 We got to the airport at 5pm. 4 hours before my flight. Far too early. Andbag drop desks weren’t even open yet.