The first journey was down to the south of the country. To Wadi Rum. The desert. Also known as They Valley of the Moon.

The drive took about 4 hours and wasn’t too exciting. We passed a lot of mosques. You could pretty much see a mosque wherever you were.

Past (one hump!) camels. Lots of goats. Sheep. Small tented villages. And a lot of nothing-ness.

We arrived at the Wadi Rum park around 1.30pm. I have a ticket (which came combined with the visa), which lets you into all the main sights. So stamped that, and headed into the main park.

Right here there were some camels munching on the palm trees – and a baby one! So cute!

Wadi Rum stretches across a distance of 100km and is a protected area. There are 5,000 Bedouin’s living in the area.

I hadn’t intended on coming here. It was never part of my original plan. But this driver package that I found included coming here, so why not!

We stopped off in a Bedouin village (they have settled here, so are no longer nomadic). The village of Rum. And I switched from my drivers car, to a 4×4 tour car for the next few hours!

After a quick whizz around the village – the guy seemed to have to visit some people, we headed off into the desert. 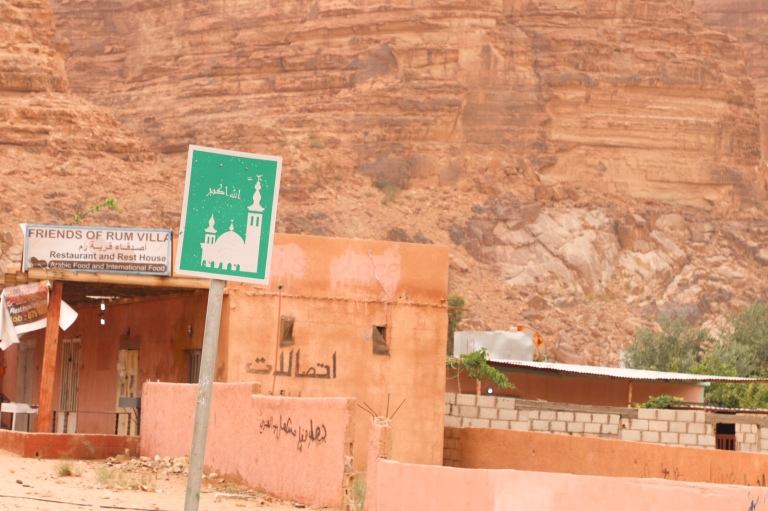 Here, the roads are no longer paved. Just sand. And the surrounding rock formations.

The first stop was by a fresh water spring – with a trail of trees giving it away. And on a large rock below there were Thamudic inscriptions which were made thousands of years ago to mark where the spring was. Here, there was also a Bedouin tent set up, and a load of camels. 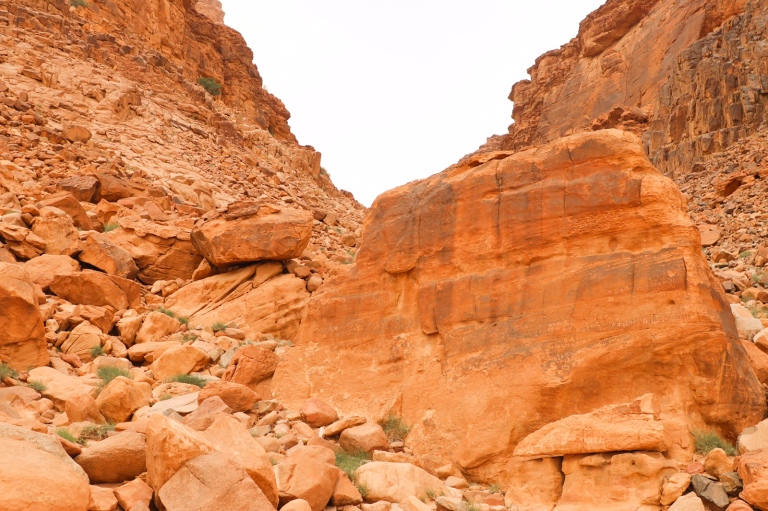 We crossed across the large sandy plain. From afar, we could see a family of camel just wandering around. No person in sight. They had no ropes attached. But they seemed to know where they were going! Plus two babies. So cool. 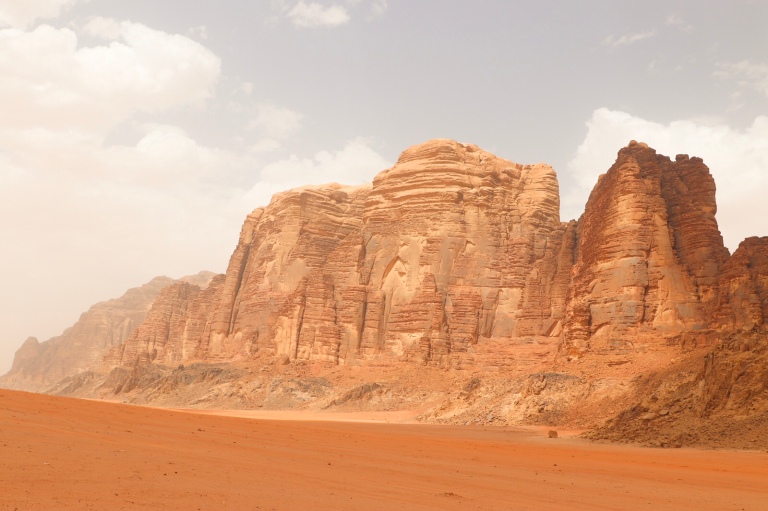 The next stop was at the highest sand dune. I was told I could go to the top. So started climbing. It was hard work. Every step forward, I slipped back three quarters of that step. I climbed dune 45 in Namibia – and this was nowhere near as big, so shouldn’t have been so hard.

Then some people coming down pointed out the rocks just to the side. They were a lot easier to climb! 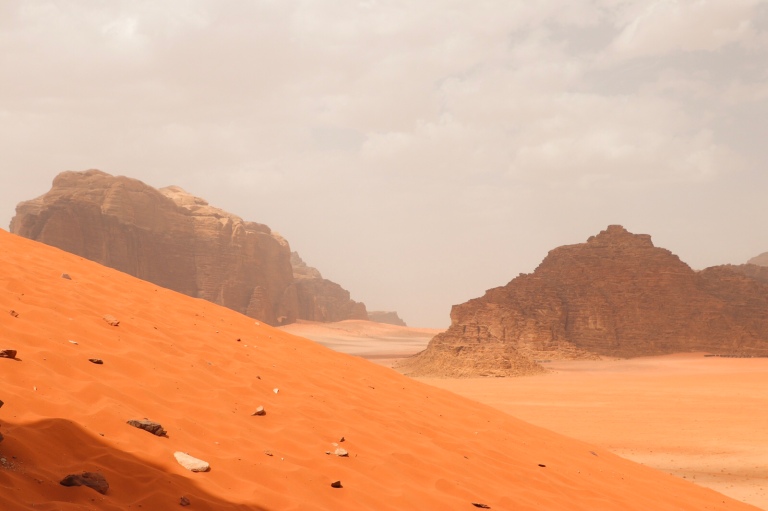 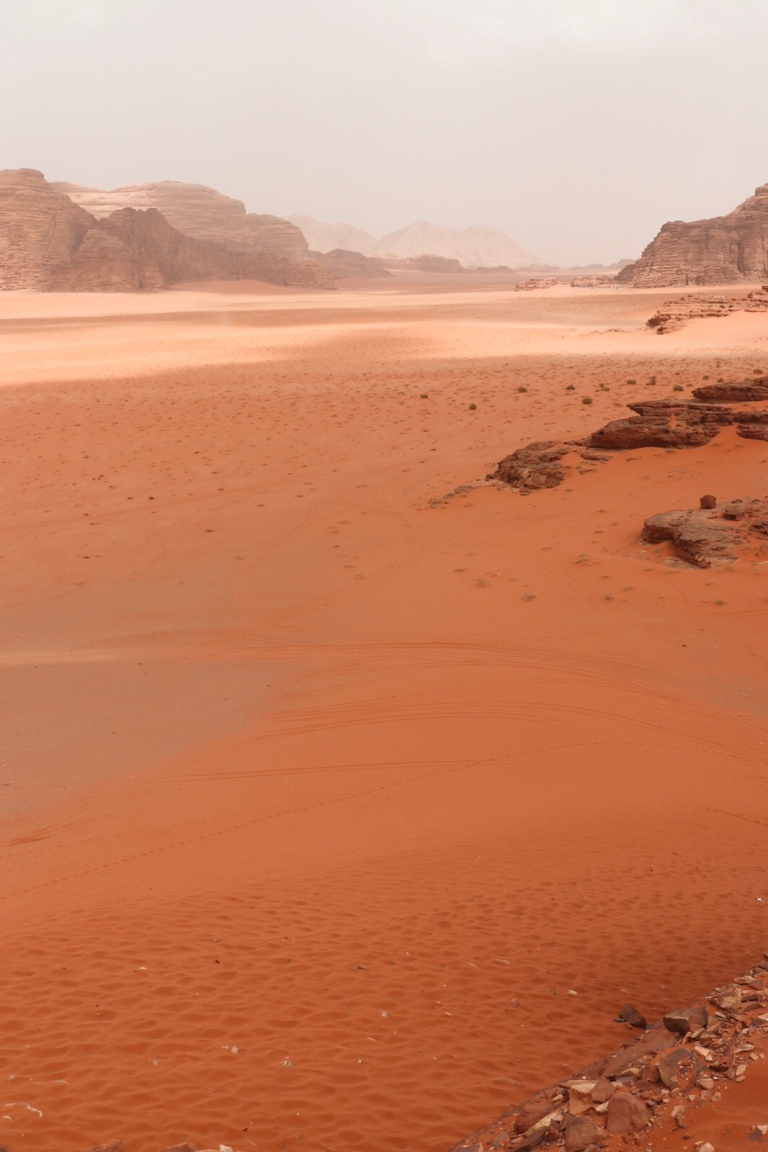 Next up – Khazali Siq. A canyon through some rocks. With inscriptions – some ostriches, feet and a woman giving birth. I couldn’t see them. But a guide from another group pointed them out to me! (I didn’t have a guide).

Then to Little Rock bridge. A rock that had a hole in it. Again, you could climb up here for some great views across the valley. 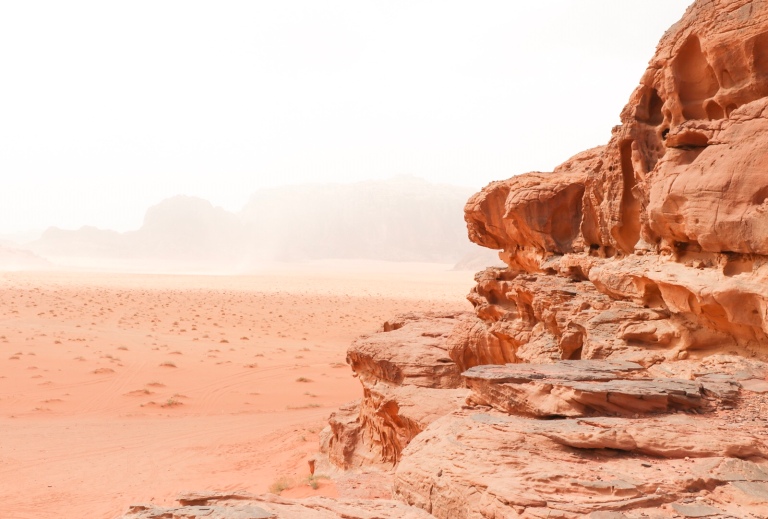 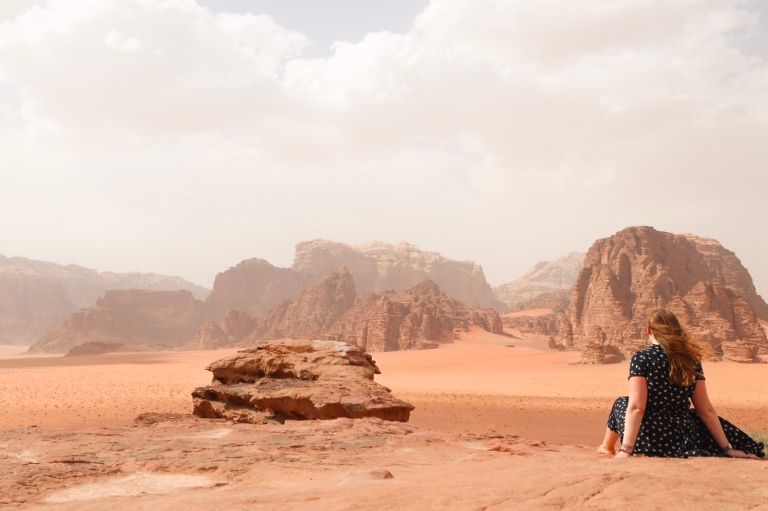 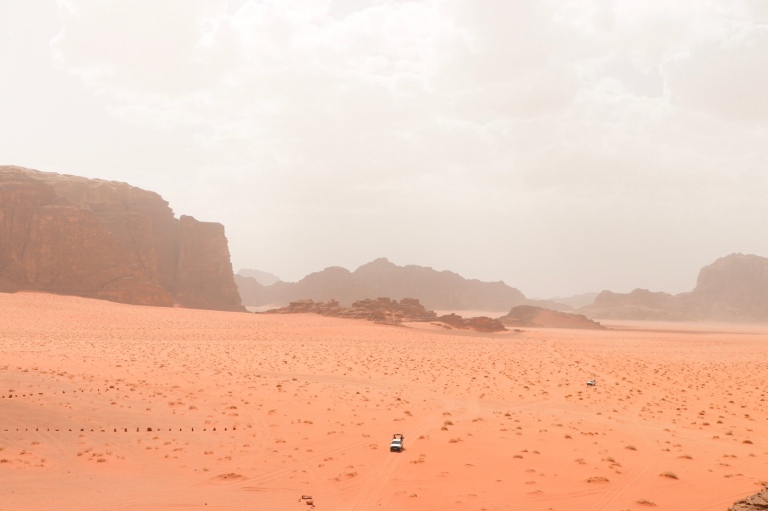 The driving and hiking took just over 2hours. Next up, a short drive to the desert camp that I’m staying in tonight.

The camp is styled like a Bedouin camp. With structures that are built to look like tents. But inside they are pretty fancy. And boiling hot. 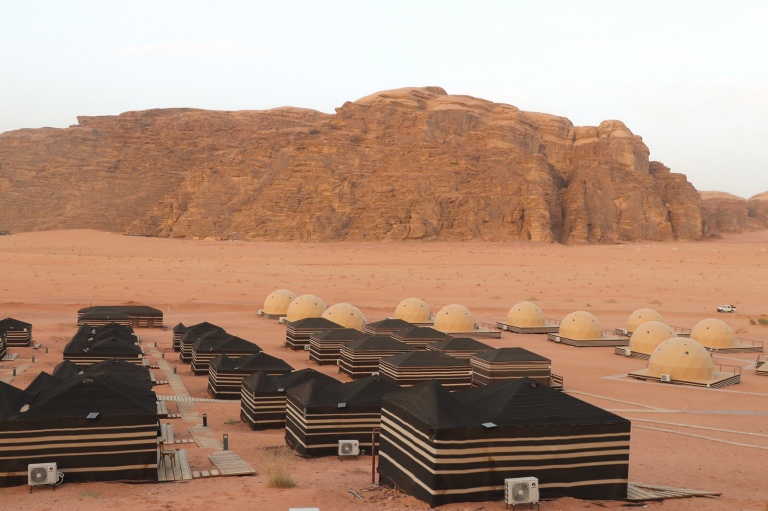 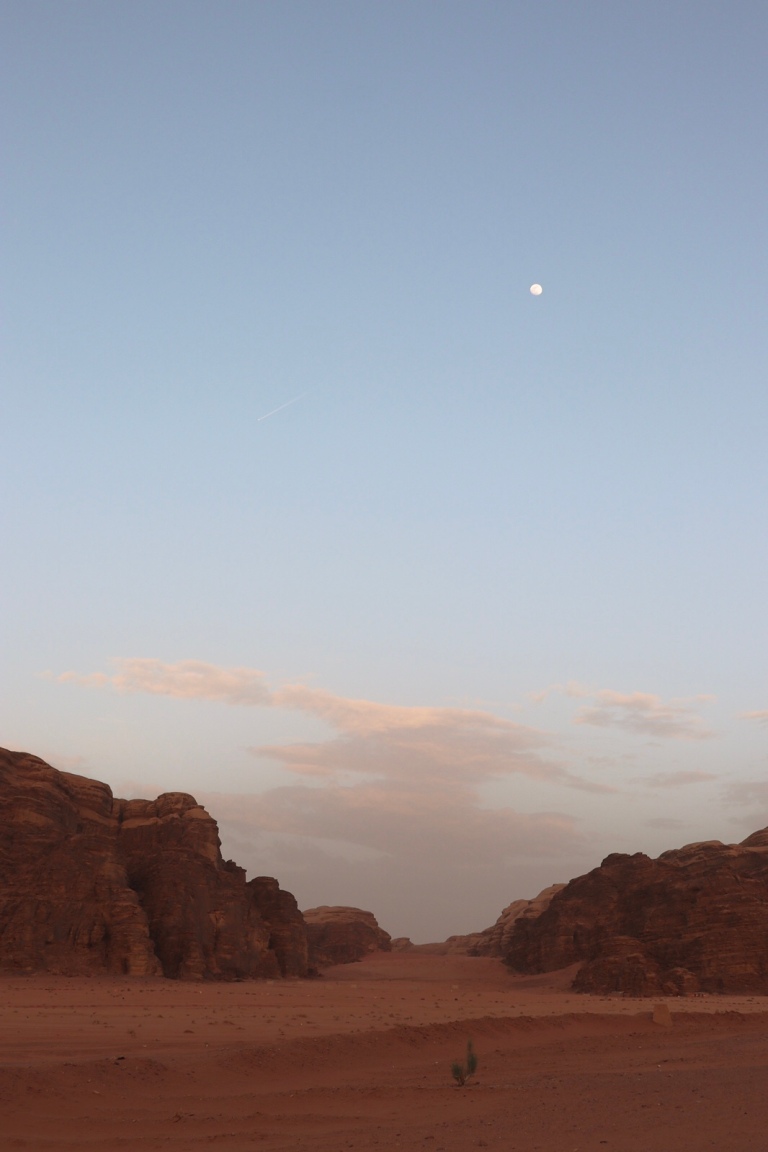 It was 5pm by the time I got to my tent and could finally lay down. Not doing so well after 4 hours sleep!

I faffed around for the next while. A disappointing sunset, which wasn’t visible due to all the rocks in the wrong place around us!

Dinner was at 8.30pm. Late. I guess they were waiting until after the time Muslims are allowed to break their fast.

There were lots of vegan options – I had various salads, chickpeas, hummus and flat bread. 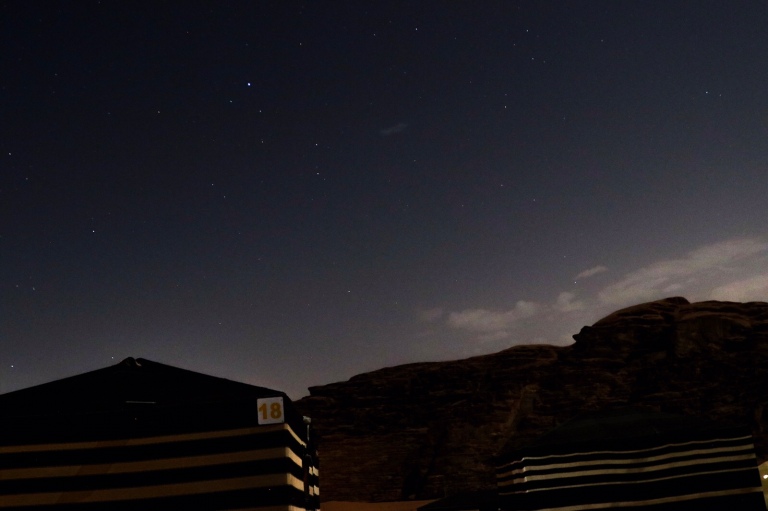