Today I still wasn’t feeling great and woke up being sick. My high temperature still unsubsided. But no time to sit around feeling sorry for myself…..temples to explore! [Note – I later found out I had dengue]

There a are a couple of modes of transport available for temple exploring, by an expensive car, by cheap bicycle (but not a chance I could manage that in my state today!) or by horse and cart!! How very old fashioned! So horse and cart it is then! 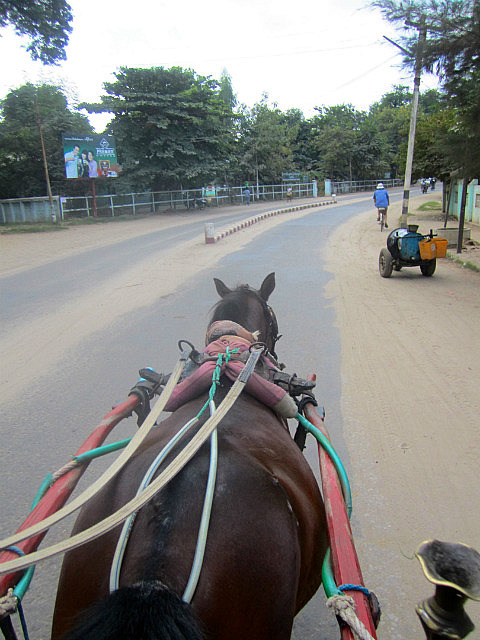 Once we had found ourselves a horse (called Metwo) and a driver (called Nanny) for the day, I got myself comfy in the cart at the back and we trotted along the roads towards the main temple areas.

Our first stop was barely out of Nyaung U! Shwezigon Paya. This is a large golden stupa, there was a lot of activity going on – monks going about their daily business, lots of craft sellers and women with watermelon on their heads. We had some traditional makeup (made from sandalwood) put onto our faces too! All the women (and children) wear it to protect themselves from the sun.

Next up, down the road towards the more traditional brick Bagan temples. We stopped at Upali Thein – inside this one, many of the old murals were still intact. It was possible to see drawings of huge buddhas and elephants. Around here it was so pretty. Big temples in the background, some smaller ones scattered nearby and it was possible to climb up a little lookout point. The next couple of temple stops were fairly similar, varying sizes of old brick temples, starting to glow in the midday sun.

We visited the tallest, the second tallest and the biggest temples! I didn’t write down the names, there were just too many of them! We went along to the river and had a look down – again – temples visible scattered at various points along! Around here you can’t turn for seeing another temple!

For lunch, I had a tomato salad. It’s a Burmese specialty, but I wasn’t all that impressed, it had a strange peanut sauce on it that I didn’t particularly like (I later had another tomato salad at Inle which was really delicious, so perhaps just a bad restaurant).

Feeling refreshed, time to trot along to some more temples! Ananda Pahto was another big temple. It was pretty from the outside – and inside housed 4 huge golden standing buddhas. As with some of the other more popular temples, we had to run the gauntlet of women selling crafts at us from all angles. 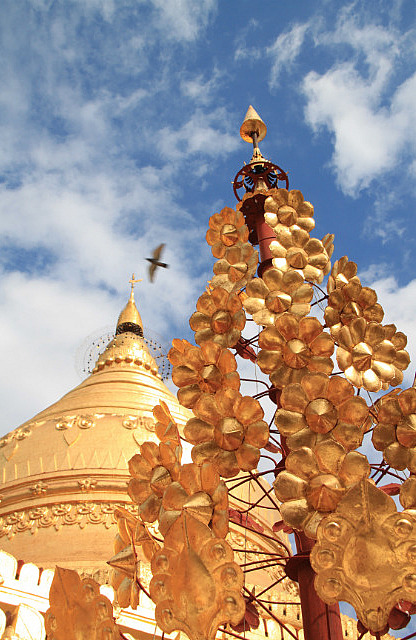 My favourite temple, for which I don’t know the name, also had a few sellers scattered around the edge. One of the little boys followed us the whole way round trying to sell stone elephants – “mummy, daddy, brother, sister, baby” – being repeated over and over and over to us! The temple itself wasn’t any different from the others, but this one we could climb up! And the view was lovely! Temples scattered across the green landscape for as far as you could see – golden ones, brown ones, even a couple of white ones.

We could see the sun beginning to set, we didn’t want to miss it!! So were glad when we finally stopped by one of the taller temples – this one again was possible to climb. I’m not the biggest temple climbing fan, the stairways are dark and narrow. But that only takes you halfway up, the rest of the way were ‘stairs’ up the side, I didn’t enjoy that. Precariously perched on a corner of the temple – I didn’t stay up there long! The view was cool – loads and loads of temples everywhere!! The sunset was rather obscured by too many clouds, but was still nice. 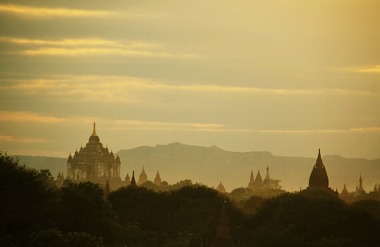 It was starting to get a bit chilly riding back into town on our horse, but it didn’t take too long. We didn’t stray for for dinner, visiting one of the little restaurants just along from the hotel. Still not feeling up to eating, but forced down some vegetables!

Feeling a little bit better today – and a bit braver, I thought I would have a go at bicycling! I haven’t been on a bike for 15 years. However, after a little test run on the dirt outside the hotel, I eventually got the hang of staying on again!

We took a different road towards the temple area, ended up being terribly hilly! We had a few temple stops – the golden brick glowing in the morning sun. Being free to cycle where ever we fancied meant we avoided any other tourists at all – having some of the temples totally to ourselves. We visited the smaller temples that we hadn’t passed by horse yesterday. I think I prefer the clusters of small temples over the singular large ones.

We cycled through some agricultural land, some white cows pulling along a cart! Cute!

I had some delicious yoghurt and honey for lunch before continuing on the cycling. I was struggling along the dusty, bumpy roads (getting stuck very frequently in the sand), my few-found cycling skills still not up to these conditions!

By 3pm, I was exhausted and returned to the hotel for a rest. Not for too long though, sunset to see! We cycled up towards the river to watch the golden sun reflected across the water. It wasn’t quite the peaceful sunset I was hoping for – some drunk locals just wouldn’t leave us alone. They were trying to take hold of me, so I left pretty quickly. 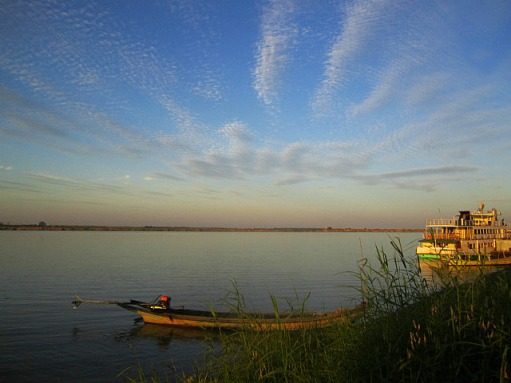 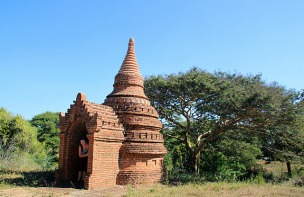