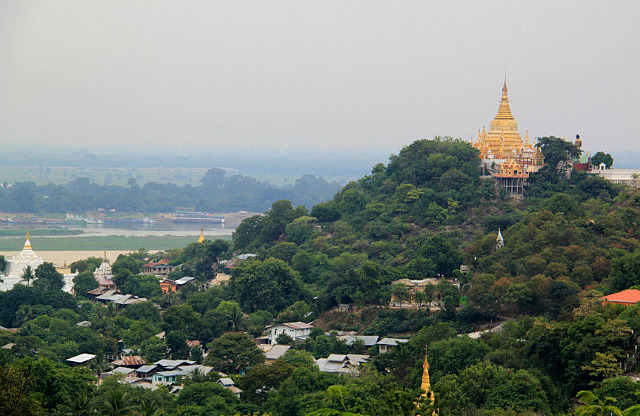 The road to Mandalay…….was surprisingly smooth!

The overnight bus was nowhere near as horrific as I had imagined it might be, based on past experiences of night buses. I had quite a surprise that upon entering the bus, it was brand new! The seats were huge, comfy and loads of leg room. Granted it was freezing, due to the air conditioning on full blast, but I had come prepared wearing 3 tops under my hoodie, leggings and socks!

The bus left Yangon at 9.30pm, on time and I fell asleep instantly. We stopped briefly for a toilet stop at midnight at a very new, large service area. The toilets, at first appearing to have no system were actually very clean! Once we were back on the move again, I was again, fast asleep!

We travelled on the new toll road, it was like a dream!

By 6am, after just 8.5 hours of bus, we had arrived into a chaotic bus station. The bus station is 11km away from the town so, again, a taxi was needed. And yet again, all trying to over charge. Eventually found one for a decent price and were off for a dusty ride through to our hotel.

I had booked a room in advance, being quoted a rather expensive $30 over the phone. So upon arriving I enquired as to any available rooms and look at that, there were and rooms were now just $20! After a short rest, time to find some breakfast. One would think, being in Asia that would be an easy task with almost every street corner covered in food stalls. However, here proved to be near impossible taking nearly an hour! 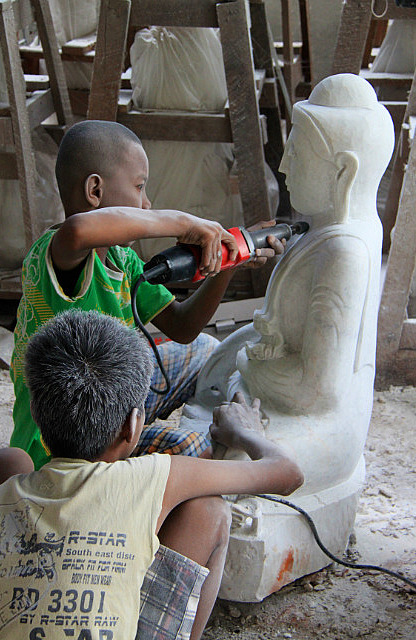 In that hour walk, we passed along many very busy crowded streets, motorbikes weaving amongst the cars and dust everywhere. There was a crowded morning market with tempting looking fruits and vegetables piled up along the whole street and many small pagodas almost on every turn.

Finding a taxi (and one at a reasonable price!) to drive around the surrounding villages also proved surprisingly difficult. In Yangon every other car was a taxi, here I couldn’t spot one at all! So we ended up hiring motorbikes and drivers for the day!

We set off around 9.30am and weaved our way amongst the crowds. We stopped off at some of the artist workshops along the way. Firstly the marble carvers – carving huge Buddhas out of white marble, very clever! Some of the finishing touches being done by children!! Next up, a tapestry and embroidery workshop – the owner explained to us that most of these actually end up in Chiang Mai! Then next up a silk weaving workshop where the girls worked in pairs, weaving the silk by hand using large looms and very delicate looking threads, again very clever. By now, it was starting to feel like a typical Asian day out, being dragged around various shops in the hope that you will buy something. However, that’s where it ended, no more shops all day!

On our way out of the city, we stopped at a few random pagodas and temples. All starting to look fairly similar now! 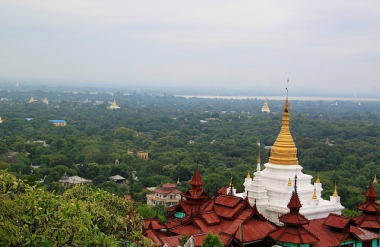 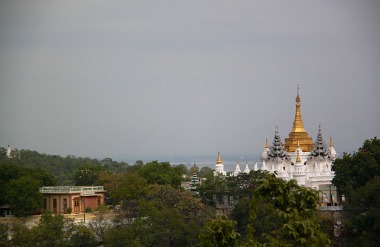 Then we turned, starting to make our way towards Sagaing. The view of the hill was spectacular, golden stupas and white temples poking out from the trees across the whole landscape. There are around 500 temples here – they were everywhere! The motorbikes dropped us at the base of the hill (sneakily at one of the entrances where the $3 government imposed entrance fee is not charged!). As we began our walk up the hill, we spotted a huge flight of steps – eekkkk! By the time we had reached the top of these steps, it became evident that this was not the top. Not was the top after the next set, or the next set! The view was becoming ever more beautiful, but after nearly 45 minutes of climbing upwards, we finally reached the top!! We were rewarded, the views were magnificent, across all the surrounding hill and countryside all the way to the horizon, all around dotted with pagodas and a cloudy mist coating the fields. We were inside a temple, itself was very colourful with mosaic floors and a view all the way around. I was disheartened when I spotted a car park round the back! 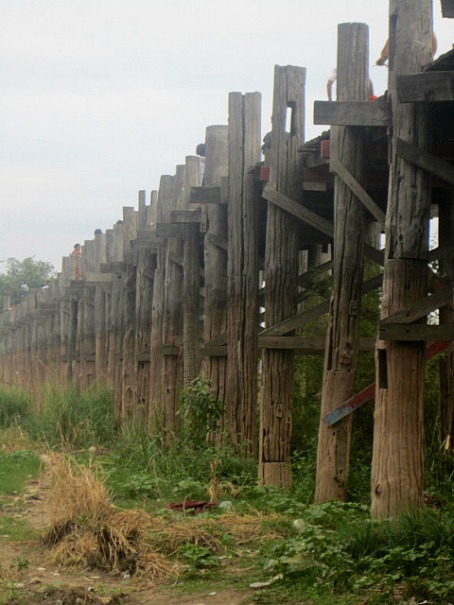 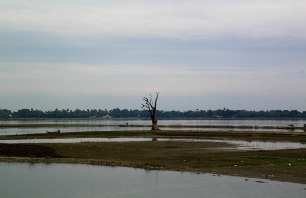 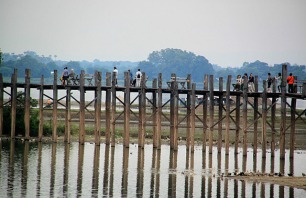 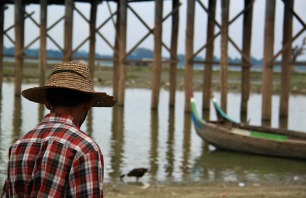 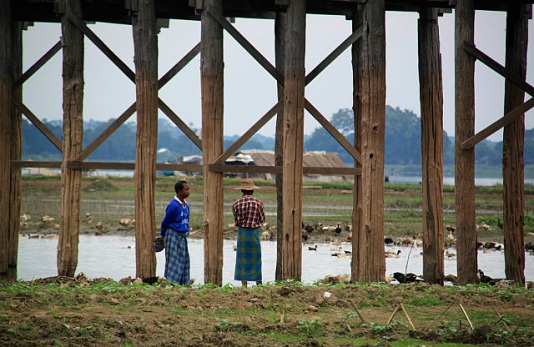 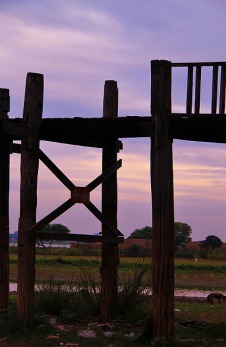 The way back down took just a fraction of the time and I counted 383 steps down. However, not including the sloping walkway which makes up at least another 300-400 steps also. Glad I didn’t know that at the beginning!!

Next stop, some lunch. We stopped at a restaurant overlooking a river and some pretty fields. The food came as around 10 little dishes of soups, vegetables, rices, curries and sambals! It was delicious. 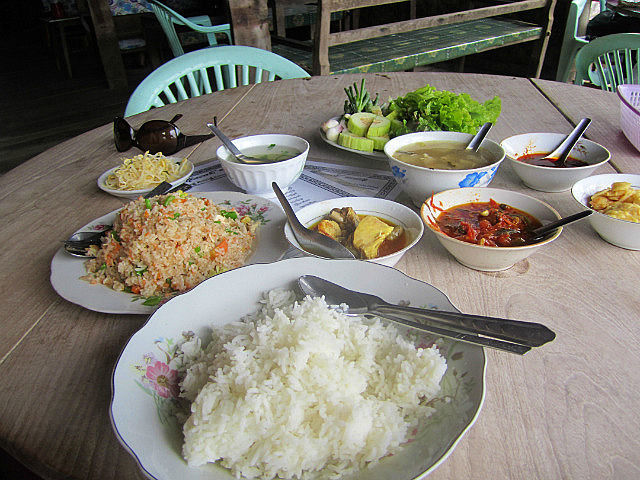 Then next up, Inwa. Again we stopped off at various old ruins of stupas. I almost prefer these ones to the golden glittering ones. We, yet again managed to dodge the $10 government imposed entrance fee and wound our way through small villages and little narrow dirt tracks. Men were using their oxen to pull along carts and other rode along on old fashioned bicycles. The scenery was really pretty, a total contrast to the city. 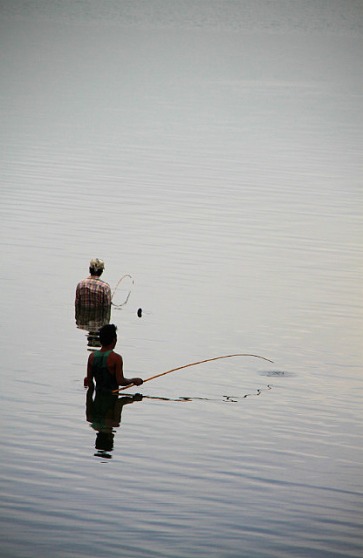 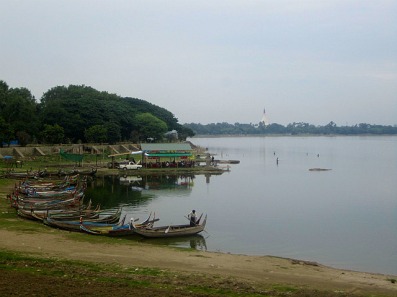 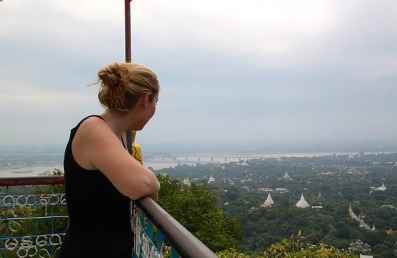 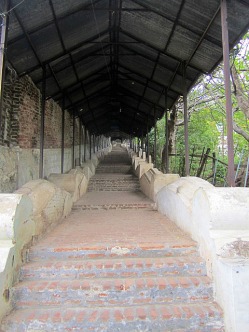 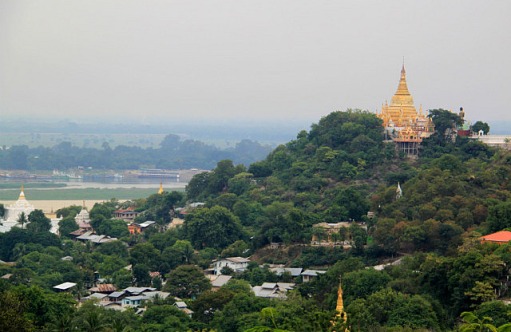 I was looking forward to Amarapura bridge – at 1.2km long, the longest teak bridge in the world. It runs across a large lake connecting the two sides and is used by the locals to pass across.

Local fisher men were wading through the lake, others rowing traditional boats and many walking across the bridge. The scenery was beautiful, the shining water of the lake melted into the surrounding fields and the golden tips of pagodas poking up around the edges.

The bridge itself felt a bit unstable, with gaps between each plank of wood and no edges to it – but that is just me being awkward. Unfortunately we were a bit too early for a proper sunset, although we were treated to a slightly pinkish sky as the an began its descent.

After a short ride back into the busy city, time again for some well earned rest! 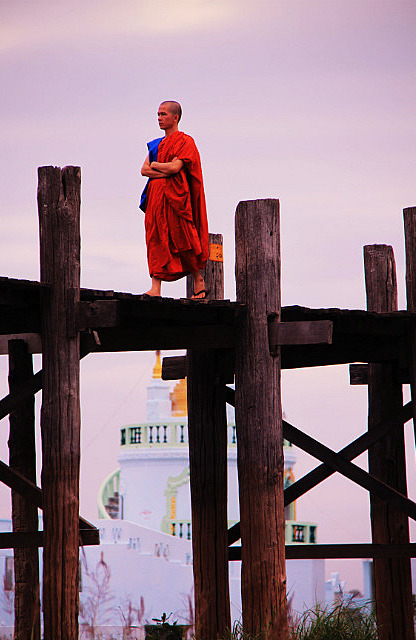 I woke up this morning feeling terrible. Shaking, freezing, with a high temperature and feeling sick. Not good.

After forcing down some toast and a lot of water, I wanted to head out and explore some of the city. After just 2 streets, it was time to stop and try some icecream! Tried some durian – just tasted of vanilla!

Mandalay palace has a 2.5 km each-side-long moat surrounding its edges, it wasn’t too far away. But before I could even get there, my body gave up. I couldn’t walk anymore, I just felt dizzy and faint. So took myself back off to my hotel feeling very annoyed. After sitting in reception for a short while, I wasn’t feeling any better. As I had already checked out of my room I had nowhere to go except stay on this uncomfy wooden seat – however, the guy behind reception was kind enough to offer me a room to lie down in for a few hours while I waited for my evening bus.

The bus to Bagan left at 4.30pm. I had recovered sufficiently to make it to the bus, but still feeling awful. This time the bus wasn’t quite as fancy as the last bus, but still far better than I was expecting in Burma! We were treated to a nice sunset across the rice fields enroute and rolled into Nyaung U at 10.30pm. Just before arriving at the bus stop, we had to stop at the government fee collection counter, a $10 per person entrance fee into the Bagan area.

Our hotel had sent a pick up – a bicycle man! He had to cycle big bags, 2 people and himself on his little bike! I did feel sorry for him.