My Burmese adventure started rather early, back in September when I arranged my visa at the Embassy in London. It ended up being a rather easy process, no queue, just £14 and 5 days later my passport returned with a shiny new sticker inside.

Officially, named the Republic of the Union of Myanmar, (changed from Union of Burma by the military government in 1989) this country has been off the travel list of the general public until fairly recently.

In 2011 there were various government reforms that meant a move towards democracy and economic reforms, ultimately granting easier access (and making travel more conscious-free) for tourists.

Planning for this trip has been infinitely harder than any country I have previously been.

Guesthouses and hotels do not have their own websites, let alone an email address. I resorted to the rather old fashioned way of picking up the phone (via skype!). Upon doing so, I was shocked to find out that many guesthouses were already booked up over 6 weeks in advance.

When I read reports that Burma was expecting unprecedented numbers of tourists this year and that accommodating all these additional people will be tight, I realised that I too was jumping on the band wagon and visiting the ‘must see’ country of the year.

Before even arriving in the country, there have already been several oddities about planning traveling there.

Another of these is the fact that there are no ATMs in the whole country that will accept a Western bank card.

As a result, one must carry around enough cash for the entire duration of your stay, plus a bit extra in case something goes wrong. However, one more thorn to add in – cash must be in US dollars which are pristine, totally flat, no bends, no marks, newer than 2006 and no serial numbers starting with the letters ‘CB’. Firstly, obtaining such notes is a pain (I managed in London fairly easily, getting a few extra in Kuala Lumpur was not quite so easy).

Secondly, keeping notes in a such a fashion is also very difficult. A book could be quite handy. I opted for a DVD box which seemed to function well!

Thirdly, I am not looking forward to carrying such a large amount of cash on my person – if it is lost or stolen, well in Burma that means holiday over. But how would one arrange getting back to Yangon to catch a flight to leave if you have no money?!

One thing for sure – this is going to be an adventure! 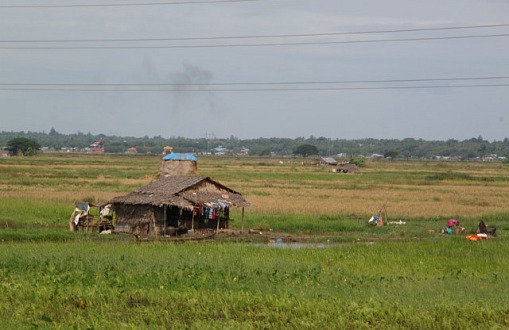 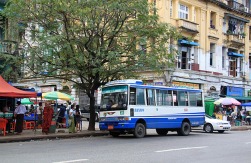 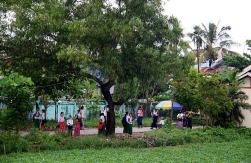 I left plenty of time to make my way through baggage scan, baggage drop, passport check and more scanning as last time it took near on 2 hours.

However, today after a grand total of around 10 minutes, I had cleared it all. Typical!

The flight to Yangon left at 7am, taking 2.5hours.

Yangon terminal (actually on total contrast to the rest of the city) is very new. Despite already having a visa, it took a while to pass through immigration.

The new ‘visa on arrival’ booth was promisingly open, however despite advertising these arrival visas for almost 6 months they are still not available for tourists.

Recently, the government re-listed the local currency, so now the official rate is fairly-on-par with the black market rate. This meant that rather than run the gauntlet of dodgy money changers in the city (which used to be the only option), it is now possible to change US dollars into kyats (pronounced ‘chat’) here.

The toilets were rather funny, with the usual woman and man option, plus the disabled toilet labeled ‘invalid’. Nice!

The hotel that I booked for the night provided a free pick up from the airport- with the vehicle being a very very old, almost 4×4, with 4 seats in the open-air back!

A rather amusing half hour ride to the hotel! It became obvious very quickly that all the cars here are old, the newest probably being at least 15-20years old. The roads were bumpy and dusty and this is the biggest city!

After checking in and a nice breakfast of cake (!) and toast, off to explore! The city centre is about a half hour walk away, but rather than take a taxi, we decided to explore!

To get to the centre should have been just one left turn, then a straight road. However, we must have gone wrong somewhere, taking an additional left turn, as we ended up in an area full of shipping containers…..! Not to worry, as we then bumped into the Botataung Paya, a very large Buddhist temple.

This temple is also known as the Sacred Buddha Hair Relic. Outside, a very busy market selling a range of food and offerings.

Some were quite elaborate with gold left coated coconuts!

The main pagoda here being the highlight, a maze of gold leaf coated rooms, with the centre said to contain a strand of hair from Buddha himself.

The gold was so bright, everything inside turned a shade of orange, I felt quite dizzy! 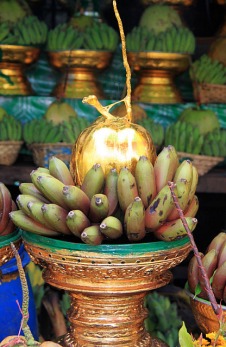 We then wandered round more streets, passing the Sri Devi temple – a Hindu temple and many little shops and stalls.

I have noticed that all the buildings here are old, the buses are old too as well as all the cars, bicycles, and pretty much everything else.

The Sule Paya is another of the city’s main pagodas. This one is unusual in that it is built on a roundabout! The edges are packed full of shops, leaving the golden stupa poking out from behind various advertisements.

All the streets are busy, the pavements full of stalls selling various food – from fruits and vegetables, to BBQ pork, rice jelly desserts and noodles. Scattered amongst these stalls are others selling random and very old looking remote controls, cables and plugs!

After a few hours of wandering the busy streets, I was exhausted! Rather than walk back, we caught a taxi – and that took a good 15 minutes! 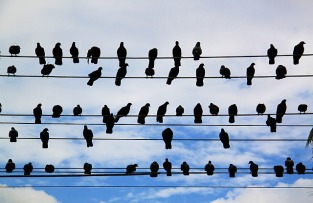 After some rest, it was time to head out and explore again. This time, the highlight – the Shwedagon Paya.

The taxi driver dropped us off a long way from the Eastern gate, so we had to run the gauntlet of hundreds and hundreds of street sellers and monasteries.

The main Paya is up a long flight of glittering steps, again lined with none else than a load more shops! However, once past the entrance, the sight is quite magnificent. There is gold everywhere and elaborate stupas, elephants, Buddhas, little temple structures littered around everywhere.

There were also hundreds hundreds of people!

We arrived during daylight, but the sun was starting to drop, one side of the golden stupa shone brightly in the sun. As the sun began to set, the stupa gradually changed colour until it was lit up by bright spotlights.

Many more lights started to come on, so soon the whole Paya was alight with blue, green, red and golden lights. With candles and oil lamps being lit around the main stupa. It was quite a spectacular sight.

After several laps of the Paya, it was time to leave and experiment with a touch of street food outside!

A few little oddities about Burma so far:

– all the men here wear skirts! They are called longji and are of a wrap around sarong style. The women also wear them. There are various different longji for day to day wear as well as for smarter wear.

– Noone owns a mobile phone. In one day, I saw maybe one mobile. If you want to call someone, you can use the various landline phone booths which are scattered around.

– despite being white and sticking out amongst the crowd, noone hassles you. Some people politely smile, no one runs down the street trying to see you things such as tuktuks, massage or anything else for that matter.

– there are no recognisable brand names. In most other countries you can’t turn for McDonald’s, Unilever products, HSBC or KFC to name a few. Here, nothing. 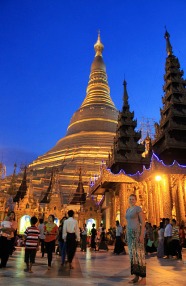 Off for another adventure, this time on a train!

The circular train makes a 3 hour loop from Yangon station, around all the villages to the north of the city, before returning back to the city again.

The station has 7 platforms, but no signs in English. I knew I wanted platform 6, but that really was no help!

After being kindly pointed in they right direction by some of the platform attendants, I managed to find the right platform and after admiring one of the – again very old – trains passing through, I managed to buy my $1 ticket (the locals pay around 10c) only to be told to run, that is your train!

I followed instructions and ran towards the train, only for it to start moving away from the platform before I was anywhere near.

Apparently that is no issue though, I managed to run and catch up with it and jump in through one of the open door spaces! It was like something out of a film!

The locals on the train that had been watching this all unfold were now laughing at me!

The train journey, along with the train itself were rather amusing, at least for the first 2 hours, after that I did start to get a bit bored, so that by the last hour I was no longer entertained by the constant flow of pineapples, noodles, huge sack of green vegetables, Buddha statues and various other oddities moving past me. 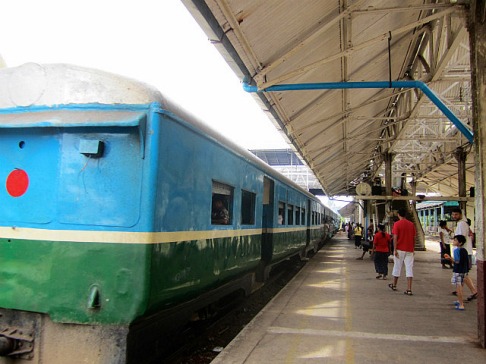 As the train headed out of the city, the landscape moved between rolling rice fields, crowded villages, busy markets, golden pagodas and people just living their life next to the railway. Some people waved, most hardly even noticed the train roll past.

Each station refreshed the various people and objects inside the carriage.

Some people carrying half their lives with them, some had enough shopping to last a year and others just had nothing. It is possible to buy just about anything from your seat, the food and cigarettes and betel nut all just come to you! 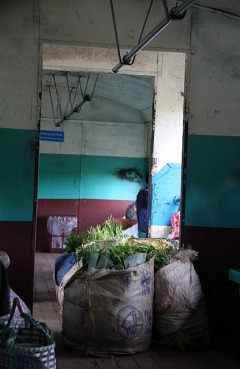 After 3 hours of rolling along, I had had enough and time to stretch my legs and wander around the nearby Bogyoke market. This market was huge and sprawling, selling mostly fabrics and jewellery. I was after a longji!

After trying a couple on, I found the one I liked! I had some lunch at a busy restaurant next to the market.

However, around half an hour later I started to feel quite ill. Oh no.

So back to the hotel for some rest. After a couple of hours I was feeling a bit better, but dreading the night bus with not much prospect of a nearby toilet!

The bus station is an hours drive away from the city, so yet again another taxi! I had pre booked my bus, but had no idea the bus station was the size of a medium town!

We must have driven around for nearly 20 minutes before pulling over at the correct bus office. There were just hundreds and hundreds of buses everywhere! 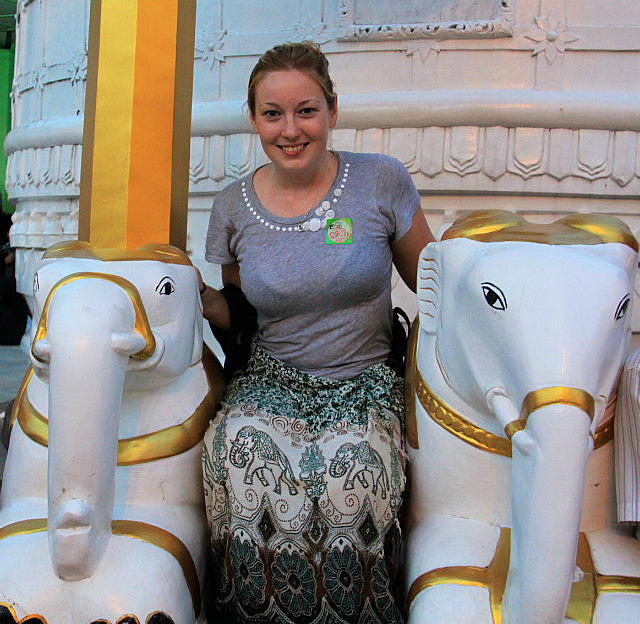