Yesterday, there was an earthquake 32km away from Dali. I didn’t feel it. But over 700 homes were destroyed.

I woke up unable to leave my duvet. I was freezing!!! I’ve not felt this cold for nearly a year and a half. I had slept in my hoodie under a thick duvet and was still cold.

After finally leaving the comforts of my warm bed, I layered up, found my coat, gloves, hat and scarf! It was 4 degrees.

I had porridge for breakfast, complete with raisins and syrup – amazing! Then headed off to explore Dali old town.

Before I had even got to the town, I spotted a morning market. This market sold everything. Most things I have never seen before! The entrance was crowded with women and food stalls, selling noodles and I have no idea what else! Lots of gooey lumps they were cutting up, some flaky pasty and goo and slimy things. Not a clue!! Dried things stalls seemed popular – dried fruits, mushrooms, starfish, squirrels (?), pipefish 😦 and loads of things I did not recognise! 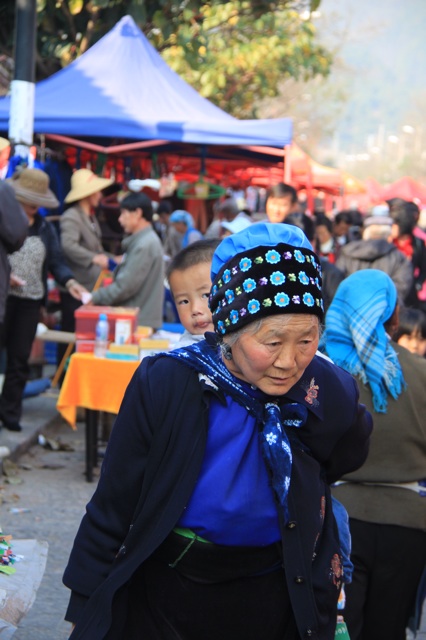 Dentist stands were doing a roaring trade. With tables infront of them with piles of human teeth, eugh! There were of course some more normal things – clothes and shoes, but all in local chinese village fashions. The people themselves were interesting too. Many walked stooped over, with a large basket strapped to their backs, slowly being filled up with goodies. Women of all ages carried children strapped to their backs using a piece of material (much like in South America). And the shop vendors weighed their goods out using old fashioned balancing plates and a weight on one end!

What I found more surprising was that noone even seemed to notice me, let alone try and sell me anything which was quite refreshing. I could wander around, admiring all the weird new items and take photos in peace.

The old city is marked by 4 gates – north, south, east and west. These gates are large and ornate, with a typical Chinese tiered roof (and look almost like a temple!). I entered the old city through the western gate.

The small streets are lined with old, cute buildings. All rather ornate, mural paintings across walls and lining the roofs, lanterns hanging and wooden shutters to cover the shop fronts. Many of the shops along this street had a mini market at the front of them selling all kinds of fruit and vegetables and things in tanks. Upon closer inspection, there was not just fish in these tanks, but mini lobsters, long eels, weird insects, tiny terrapins and huge toads!!!

The main symbol of Dali is the 3 pagodas. These are amongst the oldest structures in China and are found 2km north of where I am staying. I walked up there, along the dusty main road and was faced with a loads of huge tour busses. (Although surprisingly for the whole 2 hours I spent there, I saw not a single other western tourist! All were Chinese).

The entrance fee is enough to put anyone off – £12! Ridiculous! I’ve not come close to paying that for anything so far, let alone for looking at a few pagodas that you can see from the road and can’t even go inside!

Luckily I still have a valid student card (not sure how I managed that!) which have me a 50% discount. Even still, that is expensive. I wouldn’t have gone for the full price! (Bear in mind I have a budget of around £20 a day – which is for everything – all food, sleeping and travel)

The pagodas and are really pretty looking. 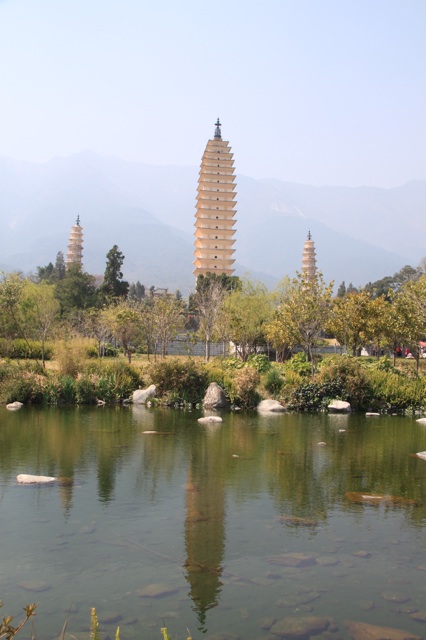 They are laid out to form a symmetrical triangle and are all made out of brick, with a white mud coating. But each one has been decorated in a different way. The tallest pagoda is 69.6m tall and building is reported to have began in 823AD! In 1978 during restoration work, over 700 Buddha statues were found inside. The other two pagodas were built 100 years later to a height of 42.2m and are also much narrower.

Right at the entrance to the site was a series of lakes and waterways. The pagodas reflected into these pools – really pretty!

And there were loads and loads of them scattered about – but in a totally symmetrical pattern, mirroring from the centre line of steps. These temple buildings were all elaborated decorated in bright colours.

Animals jumped out from the walls; colourful phoenixes and golden elephants. All along the walls and trees were red and yellow ribbon that has been tied on by visitors. The steps continued upwards and upwards, past layers and layers of temples. I eventually reached the top, with lovely views back across the pagodas and dali.

On the way back down, I counted the steps – 621! And that’s not even including the additional steps into each of the temples.

As it approached midday, I suddenly noticed I was no longer freezing. Instead, I was boiling!

I slowly started removing layers. First the scarf went, but half a hour later. Still boiling. Eventually I was down to just my t shirt and still hot in my jeans!! Now 24 degrees! Thats 20 degrees hotter than this morning! The weather here is weird.

I made my way back into the old town and found myself in another market. This one selling fresh produce. Mostly greenery of all shapes and sizes, some I recognised as cabbage, the rest I don’t know! I popped into a supermarket and was pleasantly surprised. All the things you would expect to find in a western supermarket – dove soaps, Oreo biscuits, walkers crisps and even snickers bars! Of course the packaging was in Chinese, but the contents unmistakable! In the middle of the old town is a street called ‘foreigner street’. Typically, full of souvenirs, restaurants and Chinese tourists.

The number of tour groups was ridiculous – you couldn’t even walk down the street! I am knackered after all my wandering! But I love Dali. It’s such a cute town, the buildings are so ornate and most of all, I’ve had zero hassle!