But these buses don’t go from the central Pudu Raya terminal, instead they have recently been moved to a new terminal – Bersepadu Selatan, which is out of the city.

Conveniently the metro train goes straight there in about 20minutes. However, rather inconveniently, the metro station is a 20 minute walk away. With a heavy bag of dive equipment.

The taxi drivers refused to take us, so walking.

I was beyond exhausted by the time we got to Masjid Jamek station and collapsed onto the train. I was hoping this bus terminal wasn’t going to be so confusing (well at least this time I have some idea about how buses in Malaysia work).

But it was a lot easier – loads of television screens everywhere telling you which platform and confirming you are at the right platform. Actually rather airport like. The terminal was huge, but very empty.

We left on time at 10am for the 90 minute drive down the motorway to Melaka. Malacca is a city full of history. 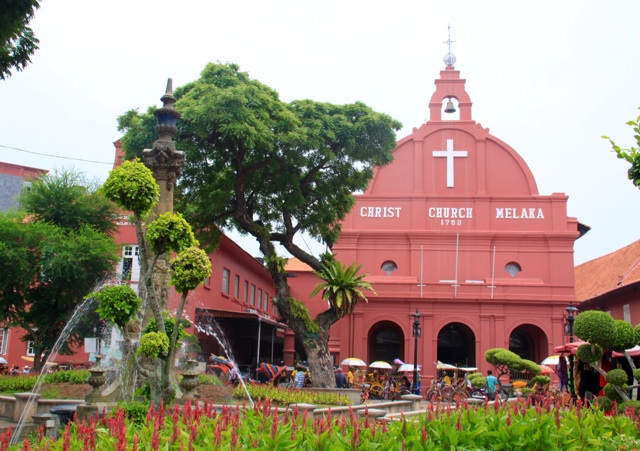 Founded by a prince from Sumatra in the 14th century, the city was a major trading port for ships from India and China. In 1511, the Portuguese conquered, who were later successed by the Dutch in 1641. The British empire ruled Melaka later on, until 1957 when the state gained independence to form Malaysia.

The bus dropped us at Melaka Sentral which is 5km out of the city centre. The taxi drivers were being annoying, trying to overcharge us. But we eventually got a sensible price.

We’re staying in Chinatown, just off Jonker Street which is the main street. (Rather a silly name!)

Along Jonker Street are lots of shops, restaurants and pineapple pie cafes! Plus a load of Chinese tourists. 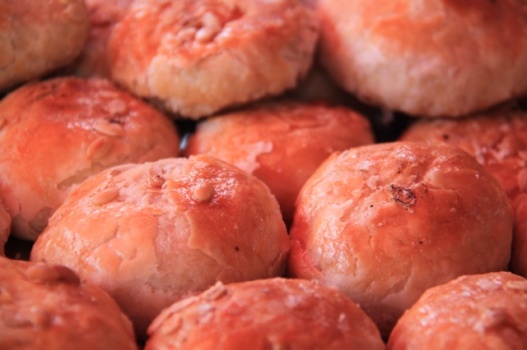 One of the food specialities of Melaka is chicken ball rice. This is boiled chicken which comes with balls of puréed rice. Can’t say I was a fan really. Despite going to one of the more recommended restaurants, the balls were an odd texture. Much more enjoyable was the icecream afterwards!!

Just over the river from Jonker Street is the old town. The old town is another one of those UNESCO world heritage sites! The Christ Church is immediately recognisable. Painted terracotta red, with white writing on it, it’s really pretty! Infront was a small, pretty garden with a fountain. Lots of cyclos lined the road – all decorated in fake flowers, some complete with a large dragonfly or scorpion too! 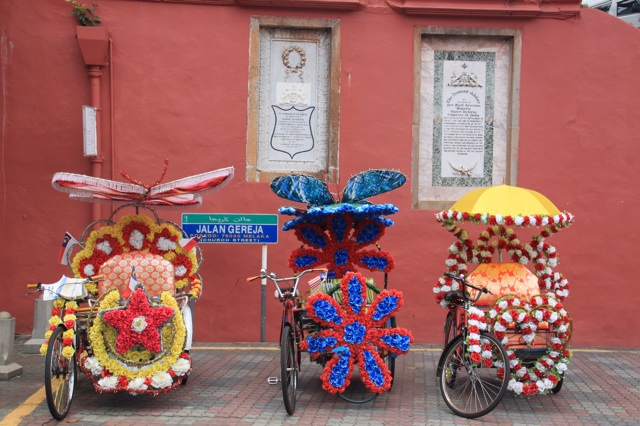 We walked up the hill to St Paul’s mount. This is a ruin of a church, not much is left apart from the outside structure and some carved tablets. Inside, a Malaysian couple were taking wedding photos! There was a nice view out across the rest of the city. Melaka is full of museums. There are over 20. But today, all closed.

The river runs through the middle of the town. A small look out point, lined with canons to protect the old town! All the shop houses had flowers lining the walls down the river and trees hung over the bridge. Pretty. Just along the river, the Flora de La Mar ship is sitting on the land. It’s a replica of the Portuguese ship that sank off the coast of Melaka enroute to Portugal. the ship is a mini museum and you can walk around and inside. It was really small and wasn’t particularly exciting! 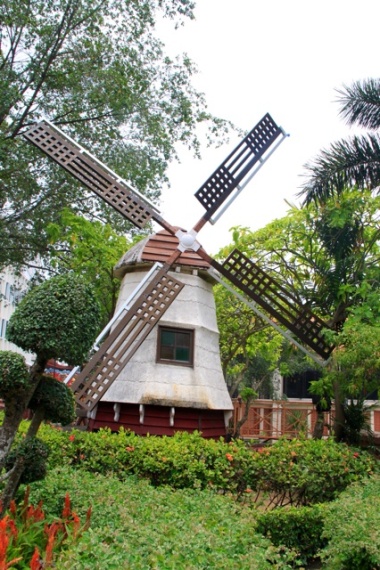 Ones I have been to previously (Buenos Aires and in England) have been a lot more interesting. The market just across the road had some tasty Malay food! Chicken curry and rice! One of my favourites. I liked the town. It’s fairly quiet (hardly any traffic) and the old buildings are really pretty. The small Chinese shophouses selling a variety of crafts and snacks. All very stress free! Later in the afternoon it started to rain and I wasn’t feeling particularly good (mixture of a fever and exhausting myself with the morning walk to the metro!). So perfect excuse to laze around!