What would a day be without another bus. I’m getting a bit sick of them.

We’re staying at the Northern end of Kuta, but the bus leaves from the Southern end about 1.5km away. We caught a taxi and asked him to use the meter.

When we arrived, all of 5 minutes later we noticed he hadn’t used the meter at all and was asking for 90k! What?! We paid 60k yesterday for the 40 minutes from the airport (which is expensive anyway and includes a load of airport fees!). It should be about 10k. So we gave him 15k and threatened to call the tourist police. Of which I know there are, but I don’t know the number and I have no working phone! Ridiculous. How stupid does he think we are.

We arrived in plenty of time for our 10am bus to Lovina. But unfortunately for us they called our names last, so we were left with the tiniest space right at the back of the extremely old and uncomfortable bus.

After about an hour of driving past pretty temples and small green rice fields, we stopped off in Ubud and everyone left the bus! So we chose some better seats before all the new people boarded.

I didn’t go anywhere North of Ubud last time, so this is all new. The road North of Ubud was small and winding, heading further up and up into the mountains. We passed through Bedugul (will be back here in a few days!) and past all the pretty looking lakes. Then back down the other side towards the Northern coast of Bali.

The air in the mountains was dry and cool – we suddenly noticed the heat wave retuning on the downwards trip! After 4 hours of being on the bus, we finally arrived in Lovina.

Lovina is a small town on the Northern coast of Bali fringed with black sand beaches. It’s actually made up of several small fishing villages that have ended up being linked together by the numerous hotels and resorts along the road just West of the larger town Singaraja.

As per usual, the bus stop was out of the town, but cheekily the bus will go a bit further actually into ‘real’ Lovina for a small fee. Our hotel is beautiful. a lovely blue pool set in a small Balinese garden, full of flowers – orchids, frangipani and barely a minute from the beach. I wanted to jump straight into the pool, but it was 3pm and we still hadn’t eaten any lunch!

Food is cheap. I had curry and pineapple smoothie for a grand total of £1.50! The beach wasn’t particularly exciting and it was starting to cloud over. 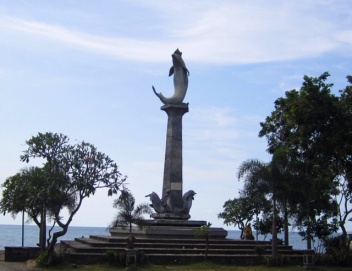 There were a few stalls around selling the usual sarongs, t shirts and bracelets. Just along the beach there is a dolphin monument – erected in honour of the dolphin just offshore. But it’s started to fall apart and some of the dolphins around the bottom have lost their jaws, they look rather scary! We tried to organise some diving for tomorrow. All anyone was interested in selling us was ‘trips to the island’ ie Menjangan island. One poster told me ‘highlights being: parrot fish’. Oh wonderful…

Regardless, that’s not where we wanted to go. But eventually found someone who would just rent us tanks and a driver.

The rest of the afternoon was spent lazing around the pool. Later in the evening, just as we were going to head out for a walk, it started to pour down with rain. So heavy! And lasted 2 hours. When we could finally head out, it was nearly 8.30pm.

Going diving! We were picked up at 8.30am for the 20 minute drive along the coast to another small town called Serririt. Here, there is a beach called Pura Jati – named after the small temple which is on the beach.

I was rather surprised when the driver told us to hurry up, dumped our kit and tanks on the ground and just drove off without a word. With my suncream, snacks, money, clothes, towel (basically everything) inside the car. That wasn’t the deal. He was supposed to be waiting! The dive site is just off the black and beach, so we just walked in! A bit like Awas in Mabul, but black. 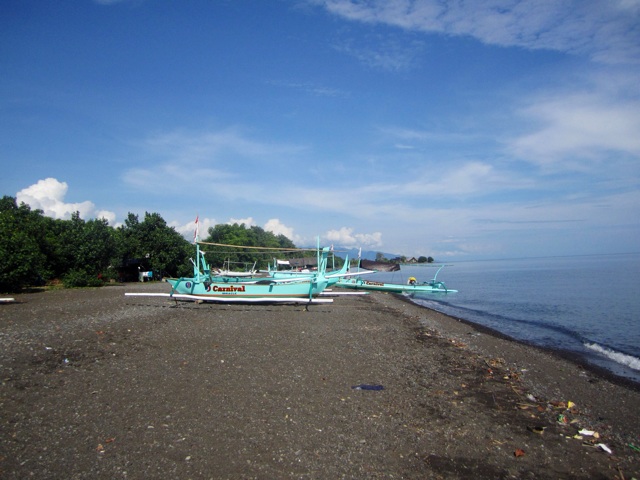 It was fairly shallow for a long time, no deeper than 10m. But then suddenly started to drop down fairly steeply. We found lots of things we’ve never seen before – gurnard lionfish (very rare with bright blue patterns on its wings), a common seahorse (I’ve never seen a ‘common’ one before!), loads of different nudibranches, pipefish, school of squid and some really annoying remora that kept trying to attach to me. I couldn’t get rid of them!!

After 75 minutes of being underwater, we had a break. And no the car hadn’t reappeared. So there is me, sat with no clothes (apart from the bikini I am wearing) while all the locals are swimming fully clothed, while they all stare at me. Embarrassing.

With no food and no money. The bakso man was nice, he said we could pay him later – so had a bowl of bakso each (being a bargain at 33p!) and was really good! It’s glass noodles and rice balls in a brown coloured soup.

And time for diving again.

This time more cool nudibranches, sea moths and a tozeuma shrimp! And finally the car reappeared. I wasn’t happy with him.

By the time we arrived back in Lovina it was 2pm and lunchtime! There are a couple of small temples in Lovina. Made of black concrete, decorated with dragons and monkeys and weird looking people! People have left square palm trays of offerings – pretty. Too tired to do much else. And raining again, so no more swimming.