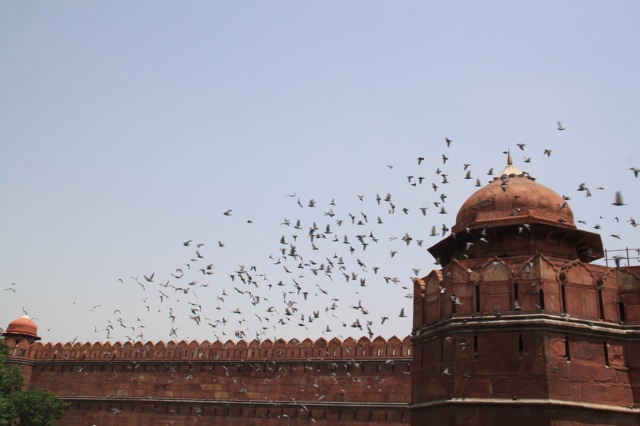 We left at 9am and headed to the nearest metro station – Karol Bagh.

The trains are absolutely packed. I didn’t even think it would be possible to get on. There are specially designated women only carriages. But these are still more packed than I’ve ever been on a train before!

After a couple of stops, we changed to a different line and someone gave me their seat! Wow, that was nice. Maybe I looked pregnant/old/injured (which is what the sign said to give your seat up for!).

We got off at Chandi Chowk and made our way along the crowded streets.

Crossing the road was funny, bicycles, motorbikes, tuktuks, cars and buses everywhere. It was just busy. And dirty. You have to be careful walking down the street, the pavement is full of potholes, broken tiles, holes in the floor, dirty puddles and piles of rubbish.

We wandered around some of the small streets full of shops – this area is known for its bazaars. And ended up at Jama Masjid.

This mosque is the largest in India and can hold upto 25,000 people! The outside is walled by a red wall running the circumference. There is a camera fee to enter of £4 which is a bit ridiculous. We were also given pink dresses to wear. Quite why that was necessary when I’m all covered up anyway I don’t know.

The mosque was nice, a large open concrete space with a small pond in the middle. It was all totally symmetrical – with three large domes and 2 minarets. Around the edges, people were sat in groups, surrounded by dirt and flies. I don’t know whether they were homeless, but where they were sitting wasn’t very nice. 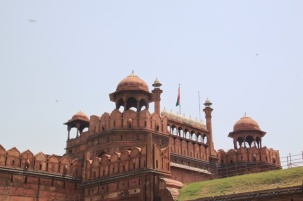 Next up, a Hindu temple. For this one we needed our heads covered, so were given small bandanas to wear which made me look like little red riding hood!

At the entrance you have to walk through water baths to wash your grubby feet (and they get really dirty walking along the filthy streets!). Past lots of flower statues and the main hall was full of people coming to pray. Complete with some men playing some twinkly music.

Just outside the temple were a group of men sat with turbans on – one of them was massive!! Apparently they have no family and have devoted their lives to their religion.

The temple runs a kitchen. Anyone can come along and have food for free. It’s open 24 hours a day and serves up chapattis and a variety of curries. The kitchen was full of women sat on the floor rolling out dough, then another set of women flipping the dough on a very large hot plate. Men were making the curry sauces and carrying (and dropping!) the huge metal containers.

I had a go at rolling out the dough!

Along the main road there were lots of street stalls selling a variety of foods – pineapples, cucumbers, iced water and loads of different fried goodies. I tried some jalebis – fried squiggly shaped stuff. They were nice, but so so sweet! And I had a samosa, again nice but spicy! Each cost me 12p.

The Red Fort was built under the rule of the Mughal emperor, Shah Jahan in the17th century. The walls of the city used to be covered in jewels, but these have since been looted. The walls of the fort extend for 2km and vary in height from 18m on the river side to 33m on the city side.

After paying the £3 fee, the entrance is through Lahore gate. This gate is called so because it faces Lahore in Pakistan. The entrance is topped with mini domes and an Indian flag. Just inside is the Chatta Chowk (Covered Bazaar) selling a variety of touristy bits and pieces. This market used to sell fancy bits to the royals.

There are a selection of buildings spread out across the grounds, separated by nice green lawns. Some are pretty, with domes and columns and ornate arches. It was busy, packed full of Indians. All of whom found a group of white girls exciting. All trying to take photos of us all the time.

I didn’t really know what any of the buildings were, but they were pretty. All in various states of ruin – but some were being repaired.

Next up – Connaught Place.

To get there, we bargained with the (rip off) tuk tuk drivers and headed off into the traffic, zooming around and nearly crashing several times. The tuk tuk drivers stopped outside an Indian clothes shop. Uh, where are we?! It’s is not where we asked to go. So after a bit more arguing, they finally took us to Connaught Place. Annoying.

This is a large circular set of buildings facing towards a green park. Apparently it has been modelled on the crescent in Bath, England. There were lots of Western shops around and it was all a lot cleaner and more modern than the places we were walking around earlier.

By now I was absolutely knackered. We wandered around for a while before finding a restaurant that wasn’t ridiculously expensive. And I had a biryani. It was really good!

Just as we finished eating, I could feel my seat vibrating. I thought it was maybe just the music a bit loud, but it felt weird. I found out afterwards that it was actually an earthquake! Far away near the Pakistan border, but we still felt it here! Second earthquake of the trip.

After finishing our late lunch, we headed back to the metro for the return trip back to the hotel. The queue to buy a ticket was ridiculous, we waited over 20 minutes!

Already my first Indian experience – a train. The Indian Rail network is one of the largest and busiest in the world. The Indian railway is the largest utility employer on earth, with roughly 1.5 million workers and there are over 6900 train stations across the country. That’s a lot!

We caught taxis across the busy streets to one of Delhi’s train stations. I was surprised at how small it was – until I realised its not the main station, but one of the smaller ones. Despite being an hour early, our train was already here.

We’re staying in the class known as 3AC. 3 bunk beds stacked on top of each other with 6 in a pod. Rather like china trains, but a lot more crowded. Some Indian men peered into our pod. But then pretty much left us alone – I was surprised we didn’t encounter more hassle than that! The beds themselves were narrow and we even had to put our own sheets on!

At 11.30pm we pulled away from the station for our 8 hour ride West, towards Bikaner.