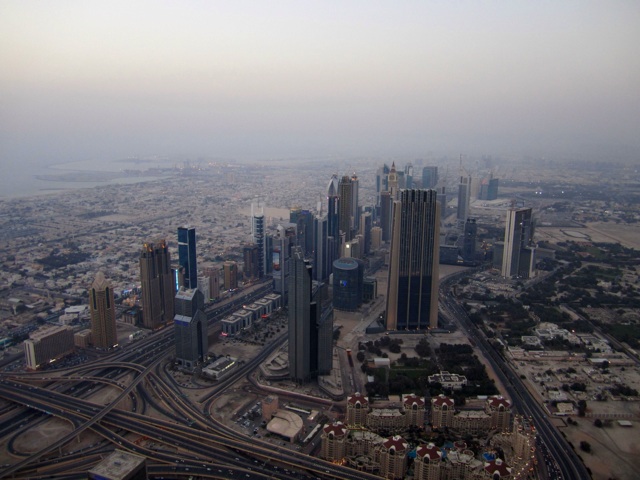 I slept for the whole 4 hour flight and we landed in Dubai, on time at 4.30am. As we came into land, the lit-up skyline was visible, the Burj Khalifa towering over everything.

I thought for a while they weren’t going to let me into the country. The man was refusing to stamp my passport as there is no space (there is a tiny bit of space on some used pages). After shouting across to some of the other immigration men, he did find a tiny space. Panic over!

I was picked up at the airport and surprised when it took barely 10 minutes to drive to my hotel. It was now 5.30am and I couldn’t have a room until 10am earliest. I was so tired and fell asleep in the hotel lobby until they woke me up at 10am! When I woke up, I was rather embarrassed – the lobby was now full of posh looking people, wearing fancy clothes. And I look a state.

But my room was amazing! It’s an apartment, a huge lounge with seperate kitchen, bathroom and bedroom. Wow! There’s even a pool up on the roof, so I went up there for a swim.

At lunch time I felt sufficiently rested so headed out to explore the city!

The metro stop was not too far away, along a dusty road. It costs about £1 to go anywhere in the city. My first stop was the souks. Coming out of the metro I was totally confused. There were no real landmarks, just sand. So I wandered around and eventually stumbled across the gold souk.

Basically a covered walkway, full of shops selling gold. Gold bracelets, earrings and necklaces. I’m not a huge fan of gold, but it was fun to wander around. There were tv screens dotted around stating todays price of gold for the various different types – but most of the gold here is 22carat. I found a bangle that I liked, it was tiny – couldn’t have been any thinner and was shocked at the £400 price tag!

You could smell the spice market before you saw it. Small alleyways filled with piles of different spices. These weren’t the ground spices like India. This was chunks of frankincense, piles of dried flowers and dried chilis and all kinds of things I have no idea what they are. I was expecting the spice market to be larger, it was actually fairly small. And I had a lot of hassle, I just wanted to have a peaceful look around, but every single shop man was persistent. So I didn’t stay long. 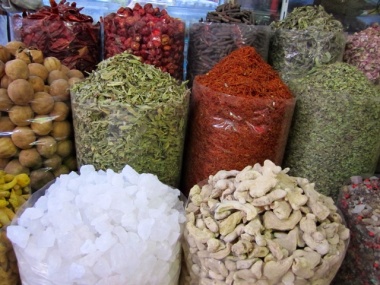 At the Eastern end of the gold souk, the shops turn from gold, to perfume. But today most of them seemed to be closed. I wandered around some streets, finding electronics, clothing and toys. There is a lot of Indian stuff for sale here – Indian shoes, saris and even the same walk hangings found all over Rajasthan. I’m being a bit ‘GYT’ today (a word I learnt in India, that English girls seem to be using these days – meaning gap year tradge!) and wearing a bindi – glittery sticker that Indian women wear on their foreheads. So absolutely loads of the men were trying to talk to me asking if I was Indian.

After I was bored of shopping, I headed back to the metro. To do some more shopping – Dubai Mall. It was a long walk from the metro to the mall, through a covered walkway, involving about 10 travelators!

Once inside, the mall is huge. Not only is there every single western shop and restaurant you could think of, there is also a ski slope, aquarium, waterfall and outdoor fountains. And a Cheesecake Factory – an American chain. I’ve only been once before, in Boston almost 6 years ago (!) and remember the cheesecake being amazing. It’s still amazing. But after about half of my chocolate and peanut cheesecake, I felt totally sick!

I’m not a fan of aquariums. But the aquarium here in the mall looked amazing. From inside the mall you can watch the huge wall of fish tank (I didn’t pay to go inside). Zooming around in the large tank, grey reef sharks, leopard sharks, eagle rays, marbled rays, a leopard ray, giant groupers, hundreds of jacks, moray eels, and a lot of dead coral. It’s still mean though keeping the animals cooped up.

The Burj Khalifa is the tallest building in the world. It stands at 830m tall, with 211 floors and it can still be seen from 84km away! It’s far taller than any other building here and totally dominates the skyline.

I had already prebooked my ticket to go up the Burj Khalifa for 6pm – lucky I did as its all totally sold out all day today and tomorrow. The entrance to the ‘At the Top’ viewing deck is through the Dubai Mall. I arrived at 5.30pm and joined the very short queue. It was 5.50pm before they started letting us through – travelators and escalators upto where the lifts are. There was a bit of a queue for the lifts, but really not too long. So I was up by 6.20pm. The lift was a bit scary, it was really claustrophobic – they pack you in. And you zoom up 125 floors in a matter of seconds.

The actual viewing deck is outdoors! Lucky it’s not raining! It’s quite dusty today, so you can’t see for miles and miles, but the view over the city is nice. You can see right down to the fountains, across to the sea and some of the surrounding village area. 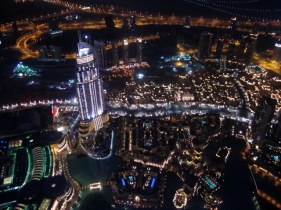 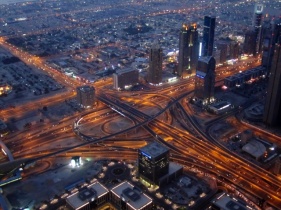 The outside viewing deck doesn’t go all the way around, so only about a quarter of the skyline is visible (after it got dark I found out that you can see the rest, just indoors!) And despite being called ‘at the top’, it’s not actually at the top. There are still many floors above – but these are mostly service floors.

I watched as the sun set, over the city, the lots gradually turning on. Every half hour there is a fountain show in the pools below. I watched from above – the fountains looked like fire dancing around in circles.

I stayed until it got dark. It was really pretty all lit up.

It was nearly 8pm by the time I made it down. There was a long queue for the lifts coming down – there are only 2 lifts. I headed outside to watch the half-hourly water fountain show. It was pretty outside, all the buildings and trees lit up. The large pool, started to flash with various different underwater lights, then the music and fountains started. It was good – apparently the largest water fountain display in the world. It didn’t last long though.

I headed off to the supermarket to buy some food for tomorrow and was surprised when it turned out to be Waitrose! Amazing. Complete with loads of English food!

Getting back to the metro took ages. They could have designed this a bit better. The mall is a total maze, but after I found my way out, it was the long walk back along the travelators. The metro was busy, especially considering its 9pm on a Sunday!

I enjoyed my lie in and lazed around in my apartment for the morning! I made myself some baked beans in the kitchen and it took me ages to pack – I had spread out a lot over my 4 rooms! So novel.

The rest of the day I spent by the pool.

Later in the afternoon I caught the hotel shuttle down to the Jumeriah beach. I wasn’t particularly impressed by the beach, not very pleasant looking! Most of it is a large building site. But it has a nice view of buildings – in particular, the Burj Al Arab, one of the most expensive hotels in the world. 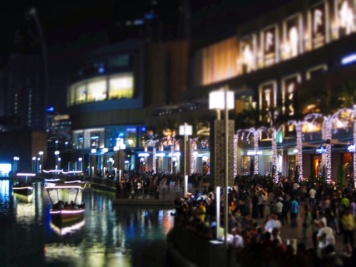 What the guide book and the hotel failed to tell me was that catching buses in Dubai isn’t as easy as paying the driver. You have to have a ticket before you get on the bus. But there was no ticket booth at the bus stop! So confusing. So I can’t get a bus. The only way back, walk just over 3km to a metro stop and catch the metro back. So annoyed.

About half an hour into my walk, I came across a bus station that had a ticket machine! So no need to continue walking towards the metro. Thank goodness! The return bus journey required 2 separate buses and took well over an hour. What a palava. Lucky I’m not in a rush. Wasn’t quite the enjoyable afternoon I had envisaged.

I headed back to the airport at 11.30pm. My flight to Istanbul is at 3am – so another night of no sleep. I’m too tired for this