The ancient city of Istanbul.

The plane landed on time at 7am, I had tried to sleep enroute – and even had a whole 3 seats to myself, but it was just so cold! Only 6 people on the whole plane were getting off here, the other couple of hundred were all transiting!

The window to buy a visa was not very obvious – ie it was shut and totally concealed by a queue of people waiting to pass through a transit gate. So when I didn’t spot it and tried to go to the immigration desk without a visa sticker the man was terribly rude to me. The visa costs £10. It was strange buying English money in Dubai – it looks weird now!

Country number (and final country of the trip) 23 – Turkey

Next odd thing about this place – you have to pay to use a trolley! Since when did you pay non-refundable money to use a luggage trolley?! So I didn’t and carried all my ridiculous number of bags to the bus.

I’m at the airport on the Asian side of the city which is 50km away. So the only sensible way into the city is to get a bus. It took nearly 90 minutes to drive to Taksim – we sat in a lot of standstill traffic!

A stretch of water separates the Asian from the European parts of the country. So once crossing… I’m back in Europe! We got to Taksim square about 9am and it was busy, full of commuters and tourists.

It took me ages to find a taxi – they were all quoting stupid prices at me and none would use the meter. Finally after 15 minutes and about 10 taxis drivers, I found one that was happy to use the meter. It was just a 15minute drive across to where I am staying in Sultanahmet. Just when I thought we must be getting close, he suddenly stopped and said he wasn’t going any further. What?! His English was not good. Then asked me for 80 lira. About £30. The journey is supposed to cost around 12-15lira! He pointed at the meter, it said 78lira. I have no idea what he did but I didn’t pay him that. I (stupidly) gave him 20 and pulled my 45kg of luggage onto the pavement.

I didn’t think at the time, but I should have taken down the number plate. So, no idea where I am.

The lonely planet map is horrendous and the google maps I screen printed don’t have these streets on. With no clue which direction to go other than the way he pointed that it was, I headed off. Struggling. I had the address of the hostel so just asked random people along the way, popping into other hotels incase they might know.

It took me half an hour of struggling to find the hostel. Stumbling across it by accident. Thank god. That was horrific. I hate this place.

I got a taxi so I wouldn’t have to struggle through 2 trams with all my bags. Not so I would have to walk anyway. Not impressed.

I arrived in a bit of a mess and was given some apple tea to de-stress, which was nice of them. And it’s really tasty! Not had it before.

I had no sleep last night, so had a bit of a rest before going out to explore.

After this mornings experience I don’t even want to go out.

The Sultan Ahmed Mosque – also known as the Blue mosque is one of the most recognisable buildings in Istanbul. With its huge towering 6 minarets and 9 domes, cascading down the roof. It was built in 1609, copying some of the design from the Hagia Sophia – but built to be even more impressive. The blue mosque is still used as a mosque today. I visited during prayer times, so couldn’t enter inside which was a shame.

It’s known as the blue mosque due to the blue tiles on the interior.

Just across a small park is the Hagia Sophia, the most famous building in Istanbul. But the queues were huge – winding all around the front. So I’m not joining that. The city is so busy, just totally full of tourists. So, onto plan B – shopping!

The spice market is a couple of indoor streets, full of shops selling spices, Turkish delight and ceramics. Wandering around, it smelt like India. It was really busy and I had a lot of hassle from shop vendors – so left very quickly. One thing Turkey is famous for – Turkish delight (locally known as locum). 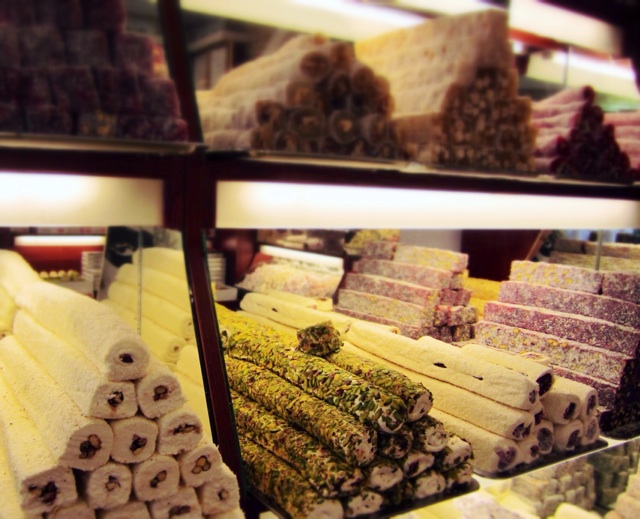 Here, it comes in a lot more flavours than just rose or lemon. There is coffee, mint, pistachio, chocolate, coffee etc. and a lot of them contain pistachio nuts.

Some of the shops are very old. I went to one that is 236 years old, it was like an old fashioned sweet shop full of glass jars of traditional sweets.

The Grand Bazaar is an ancient collection of 64 lanes, full of small shops. It’s all undercover and within a walled complex. I was expecting it to be a lot more chaotic (Asian style). But actually it was fairly organised in separate shops, although it was busy. I had fun wandering around looking at pretty lamps, ceramics and more spices. Other things for sale – belly dancing outfits, fake handbags, shoes and clothes. I went back out in the early evening.

Earlier in the day I had seen huge queues outside a non descript building that looked more like a toilet block. Turns out its the entrance to the Bascilica Cistern. And now, at 6pm – no queue!

So I went inside to have a look. Down some steps, into the dark. A cistern is an underground reservoir, used to collect rainwater. This is just one of many located around the city. This one was built in the 6th century with help from over 7,000 slaves. The Basicila Cistern is one of the largest, being able to hold upto 80,000 cubic meters of water.

Today, there is only about a foot of water in the bottom of the chamber – full of large fish! Walkways have been built between the 336 marble columns, all lit up in orange. It’s really pretty. And yet again, I’m in a James Bond film location – with the cisterns being used for the film From Russia with Love.

In the far corner, the base of two columns have been carved with the face of medusa. Noone really knows where these came from, but it’s thought they were taken from a building during the Roman period. Back out in daylight and for dinner I tried a kebab. I’ve never had one before. These are traditionally a middle eastern food, so (almost!) from this region. It was chicken and salad in a pitta bread and was good! I was pleasantly surprised.

The hostel is so central, being a 2 minute walk from the Hagia Sophia and has a great view from the roof. Just a shame it was cloudy, no sunset.

Time for an early night.

The plan was to head to the Hagia Sophia early and try to beat the queues. That failed slightly as breakfast didn’t start until 8.30am. So I had to wait. But breakfast was worth waiting for – it was really good! Salad, cheese and bread with Nutella! All things I’ve not had in a long time!

So I failed in beating the queue. It was longer than yesterday.

Oh well. Nothing else to do but join in. Surprisingly the queue didn’t take all that long. Well 40 minutes. But given the length I was expecting longer!

From the outside I wasn’t sure why – the Blue Mosque looks far more impressive. But from the inside, the Sophia is amazing. The name Hagia Sophia in Greek means the Shine of the Holy Wisdom of God. Originally, from 360, when it was built, the building served as a church. Later becoming a mosque in 1453.

Then in 1935 the Hagia Sophia was turned into a museum. For nearly a thousand years, it was the worlds largest cathedral – until the building of Seville cathedral. The huge hall is ornately decorated, full of Islamic symbols across the walls and ceilings. The inside of the domes have been intricately painted all in a variety of different colours. And in one corner, several of the windows have stained glass in pretty patterns.

It carried on upstairs – there was a viewing area all around the top so you could look down into the huge hall. Around the walls on this upper level were several falling-apart mosaics of Jesus, Mary and others. It was really nice. Outside, the walls were covered in cats! There seem to be a lot of homeless (?) cats roaming around, but all looking fat and shiny. I headed back up to the Grand Bazaar for some more shopping, then didn’t do much else all day! 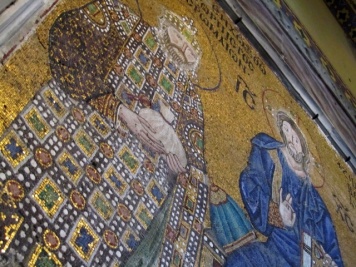