Today was the earliest wake up call. 5.20am. No such thing as a lie in on holiday. But for very good reason – we were diving Radshoo Madivaru. And the name of the game is to be early. So early in fact, that we were the first boat to arrive and the first in the water. And the reason….hammerheads. You have to be lucky. I had been warned it was around a 10% chance of seeing one (which actually is fairly high – but I’m not particularly lucky!)

We were doing a blue dive. Dropped down near the reef and started a search pattern at 24m at a 45 degree angle away from the reef. After 20 minutes of blue water (ie nothing apart from a few random unicorn fish that chose to follow us). And there it was!

Just to the right of me. Swimming. Amazing!!!! Of course I chased after it – and saw it pretty close up, it was large. A scalloped hammerhead.

Most of the rest of the group had been a bit slow and didn’t see it.

We headed back to the reef – and there was a marbled ray. Followed by an eagle ray. And then a devil ray swimming around. A few neopolian wrasse and a couple of white tips. Pretty cool! All rather uncommon things! And all before 7am!!

Of course it was then breakfast time. And time to go diving again. This time on the actual reef. The current had picked up somewhat, so spent a while swimming against that, which is never fun. But there were so many fish around – large white tips and a few more eagle rays. Really nice.

And that was it. My last dive 😦 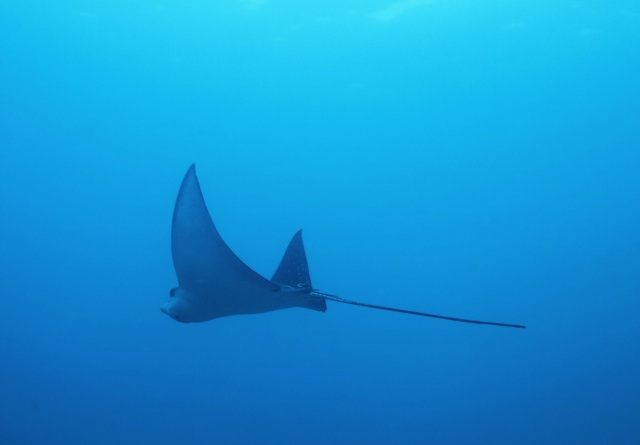 So we began the long sail back to Male. Across glass flat water. It was a lovely crossing. But industrialisation soon became much clearer. No more were the deserted waters and beautiful islands. But the big city, tonnes of boats. And the continual burning of ‘rubbish island’.

We moored up and at 4pm headed off to the bright lights of the city of Male. This is the capital city of the Maldives. We saw the presidential palace (well the gates at least!) and the parliament building. The Old Friday mosque – the oldest in the country, bring built in 1656, with its ornate stone walls carved in Arabic, with an old graveyard next to it. Some former sultans are also buried here.

The golden domed mosque – large and very modern looking, known as the Grand Friday Mosque was very busy. People passing by and heading to the nearby parks and open spaces to chase pigeons.

The harbour was full of fishing boats preparing to head out for a night of fishing. And the fish market was still trading – with some huge, huge yellow fin tuna being carved up. Rather sad. We saw those in the water just a few hours before!! 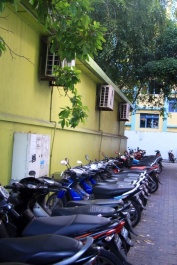 The mode of transport here – scooter. The streets were lined with them parked up. And crossing the road you had to weave and dodge your way through them!

And of course, there were a few disappointing gift shops. Clearly they don’t have their own unique souvenirs here, so there was tea from Sri Lanka, candles and incense from Thailand, cinnamon and coconut wooden items from Indonesia. And clothes from India. And overpriced magnets. What a shame.

The town (‘city’) was rather odd. And actually very much like Semporna!!

And as the sun was setting, we headed back to our boat for the final night on board and a great last dinner. I’ve eaten so much food I won’t be hungry for weeks!