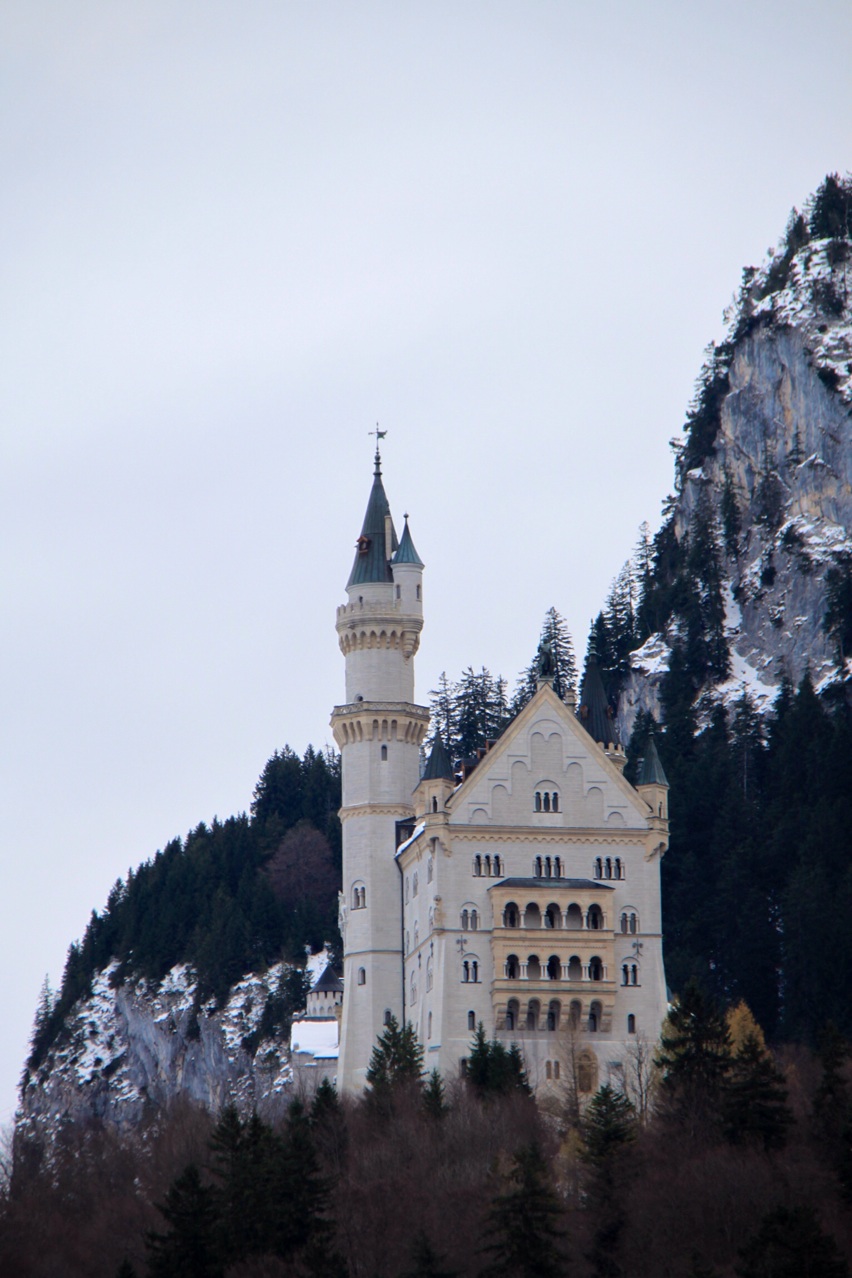 An exceptionally windy delay was causing flight delays across Northern Europe. Not an ideal day to be off flying then!

We left on time at 5.30pm, a brand new BA plane – really nice and very roomy. Enroute to Munich and my first time in Germany.

We arrived at 8.15pm local time (just 1 hour ahead of England) and was a rather windy landing! With snow on the ground! A lovely zero degrees. Chilly.

Passport was very quick and by 8.40pm we were already on the airport train towards the city! Very quick.

The train took 45 minutes to pass through the city to our stop – Hackerbruke. And it was bitterly cold and very windy for the 10 minute walk to our hotel. Very impressed – and a lovely comfy, warm bed.

Well it didn’t snow overnight! But outside was grey and bland, the blue tram driving past being the only flash of colour.

The tram stop right outside the hotel didn’t have a ticket machine, but it was only a couple of minutes walk down to the next one, which does. EUR10.60 for 2 people for an unlimited day ticket.

We passed a small cafe which had amazing looking pastries, so we bought a vanilla croissant and a raisin whirl for breakfast later. The trams are fairly frequent, with one coming by about every 5 minutes, so we didn’t have to wait long.

This was a really old fashioned one! We weren’t going far, just 5 minutes or so down the road to the main train station – Hauptbahnhof.

The station was huge, 36 platforms. And a massive concourse full of little bakeries – again with huge selections of pastries and breads. Despite being about half an hour early, our train was already waiting at platform 28.

Icicles hanging from the bottom of the train!

If there were icicles on the trains in England they probably wouldn’t even be running, too cold or something like that.

The train again was quite old fashioned. All the seats were in pairs, facing each other in small sets of 4. But it was comfy enough. And soon filled up with tourists all heading off in the same direction.

We left at 8.50am, right on time. German efficiency.

And enjoyed our pastry breakfast as we headed out of the city and into the countryside. Heading into more and more snowy fields – getting thicker as we drove on. 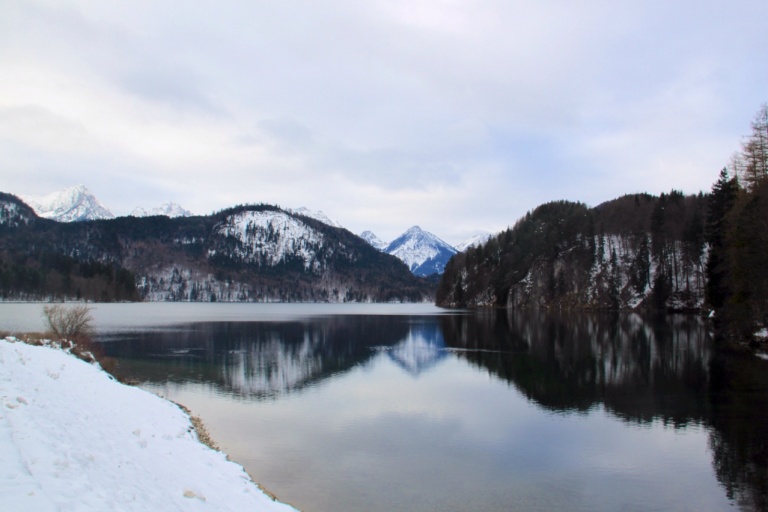 After an hour on the train, at the station called Buchloe, we had to swap to another train – but it was already waiting across the icy platform.

This train was a bit newer, again the seats in sets of 4, but very close together! And another hour of small Bavarian villages, endless snowy fields, cute churches with domes on the spire and through small wooded areas, heading closer and closer to the snowy mountains.

And we finally arrived into Fussen at 11am. Right on the border of Austria.

There were buses waiting outside the train station, to head to the small village of Hohenschwangau. I was surprised that the short bus journey was included in the Bayern train ticket we had – wow! Saved EUR6 there then.

The reason we have come all the way here – to see some castles!

Nestled up in the mountains, covered in snow.

The village was very small and cute. But every building was either a restaurant, hotel or a souvenir shop! And covered in thick snow.

Luckily I had reserved castle tickets online in advance. And we beat the queue (fast walking from the bus!) so collected our tickets within seconds.

The people behind weren’t so lucky – a huge queue!

We had some time to spare so wandered around the small village, up to the lake which was beautiful – surrounded by mountains (i.e. Austria!) and had lovely views of the yellow-y orange Schloss Hohenschwangau.

So the options up – by horse and cart (huge queue for that of at least 70 plus people), or walk. It was a nice walk, uphill, for about 40 minutes through the snowy forest, the occasional glimpse of a castle and a waterfall.

Horses panting as they pulled carts of people up. From the bottom of the castle, it looked a lot bigger!

There was a view point just infront, across the snowy land, to another huge lake and people skiing down the hills.

Construction of the Schloss Neuschwanstein began in 1869, by King Ludwig II. He only ended up living in the castle for 172 days. And it is still unfinished inside. This castle is said to have been the inspiration for Walt Disney when designing his castle. Our castle tour (have to be on a tour to go inside) was at 12.55pm. And right at 12.55pm we could scan our tickets to pass through the automated gates. To join the 40 odd people tour group. 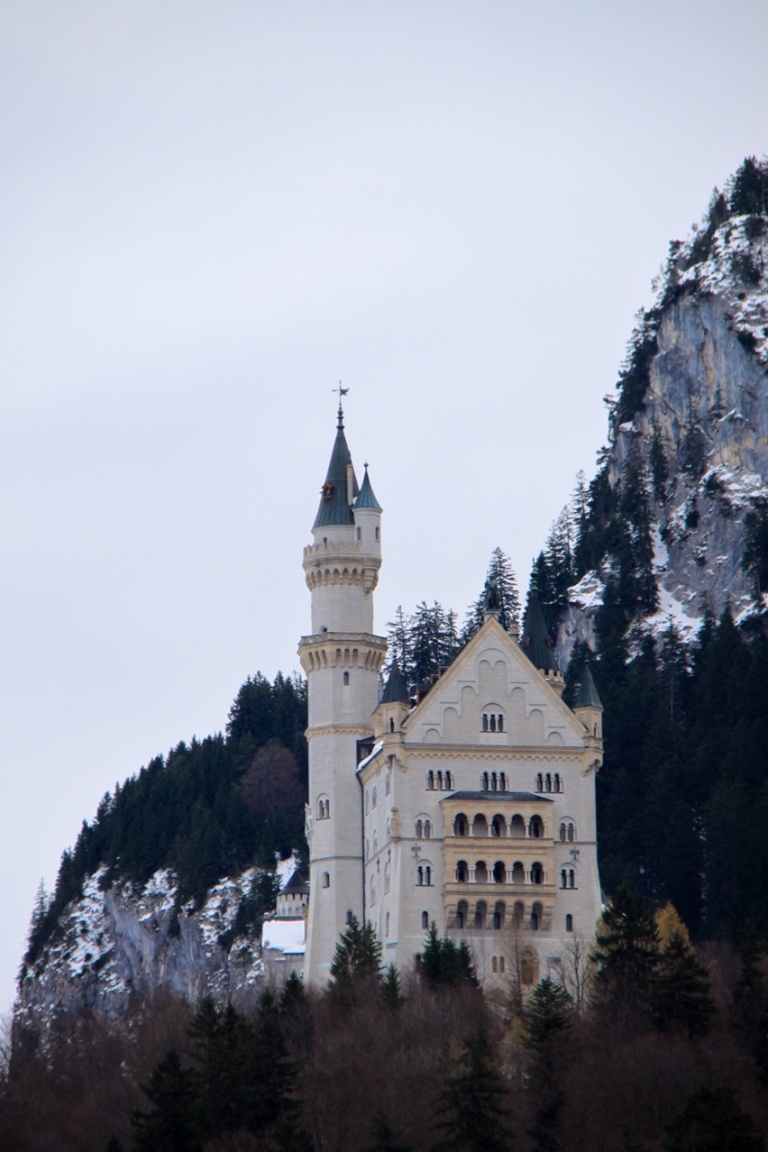 We went up a long spiral staircase and through several rooms – the servants quarter, the King’s bedroom, living room, dining room and kitchens. All very elaborately decorated. And the views were lovely. Sadly no photos allowed inside.

It only took 30 minutes to walk around. And back out into the cold (via some souvenir shops, of course!). And back down the hill! This time a much faster walk!!

We caught the (free!) bus back to Fussen and had a short wander around this cute town, before our 3pm train back to Munich.

Again, we had a change of train after an hour. And had a lovely bright red sunset as we arrived back into the city at 5pm.

Another short tram ride and we were in the middle of the Christmas markets – the Christkindlemarkt.

Around Munich there are many of these Christmas markets – but we started off with the largest (and probably most touristy!!) the Marienplatz market (which seems to stretch a long way off the square itself, in every direction!).

Small stalls lining the streets selling wursts (sausages), sugared nuts, lebkuchen (like gingerbread), baubles, nativity characters and all sorts of crafts. And gluhwein – mulled wine. Everywhere! It was busy – you could barely move in places! But fun. We quickly got a cup of Gluhwein, after working out the system. EUR3.50 for the wine, plus a EUR3 pfand (deposit) for the cup. And the cup is just as exciting as the wine! Ours was in the shape of a sock, with reindeer on! 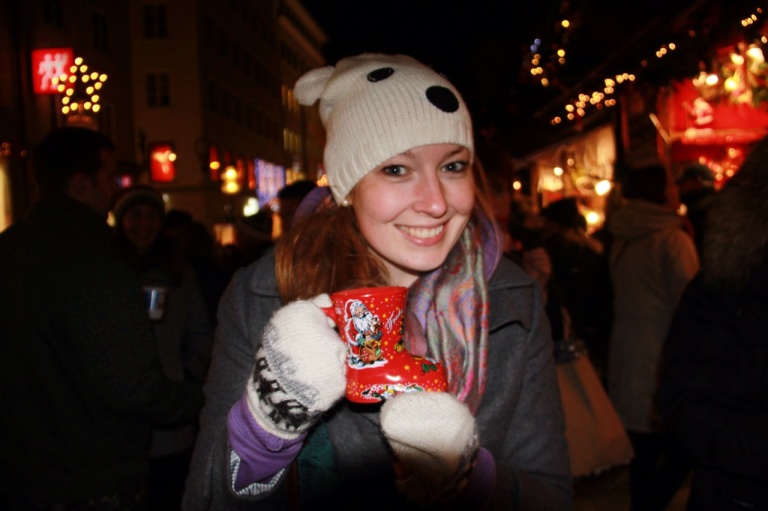 If you want your deposit back, you give the cup back. Otherwise, you just keep it as a great souvenir. And you could go around collecting a huge range – every gluwein stall had a different one!

And there were a lot of gluhwein stalls. On one side of the Marienplatz square is the Neues Rathaus – the Town Hall, a huge old gothic building covered in gargoyles, dragons and spires.

On one balcony there was a trio of men singing Christmas songs. A huge Christmas tree sat on the ground just under the tallest spire of the hall. We wandered around all the streets and came across another smaller market – mostly full of locals, eating and drinking. This one had a huge windmill type ornament in the middle! 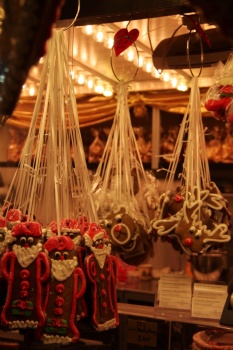 We tried some food – the almond nuts were tasty, a crepe (with amaretto!) and a wurst in a roll! Annoyingly when it came to heading home, I realised that I had lost the tram ticket. It had fallen out of my pocket. Stupid place to keep it. So we had to pay another EUR2.60 each (!) to go just 2 stops on the metro. Rubbish. (And a bit too far to walk).