The first weekend away of the year. And off on the Eurostar to Belgium.

The land of chocolate and waffles. Yum.

Still being February, in theory not the peak tourist season, although the train leaving London on Friday afternoon was completely packed! South East England was fairly dull, lots of grey fields and the signs of some unfortunate flooding. 20 minutes under the sea and we were in France. A quick stop in Lille and by 7pm UK time (8pm Belgian time) we were pulling into Gare du Midi in Brussels.

Just 2 hours from London. Some days it takes me that long to get home from the office – how ridiculous!

No passport control (did all of that in London), just waltzed straight into the country and off to find the tram. Found the tram stop, bought a ticket (EUR14 for a 10-use ticket!) on a French-only machine. Now the hard part – when doing some research into getting to the hotel, there were 2 tram lines on the map. At this tram stop, there were at least 5 different tram numbers – and none of them being the two I was expecting. Hmmm. After rather a lot of faf, we ended up on one, going in the right direction.

Next obstacle – tickets need to be validated on the tram in a small orange box – eventually I worked out which way the ticket went in! We were barely on the tram for 5 minutes (4 stops!) and were right outside the hotel! Lovely.

So turns out we went to the wrong tram stop yesterday. There are two types of tram – a ‘tram’ and a ‘pre-metro-tram’. We wanted the ‘pre-metro-tram’ but ended up at the stop for the ‘tram’. Confusingly tram is signposted ‘T’ and pre-metro-tram is ‘M’. Not got as far as working out the signpost for the actual metro. Could it be any more confusing.

Without much drama, we made it back to Midi this morning, ready for our 10am train to Bruge, which was late.

The platform was packed, but luckily (once it arrived) the train was fairly long. So we got some seats. We journeyed out of the city, through some pretty towns and countryside – lots of animals around – everyone seems to have a few chickens, a goat and a donkey! After just over an hour, we arrived in Brugge and with what seemed to be almost the whole train, disembarked.

Finding our way to the city was easy – follow the crowds!!

We walked through a park just north of the train station and met with our first part of canal. 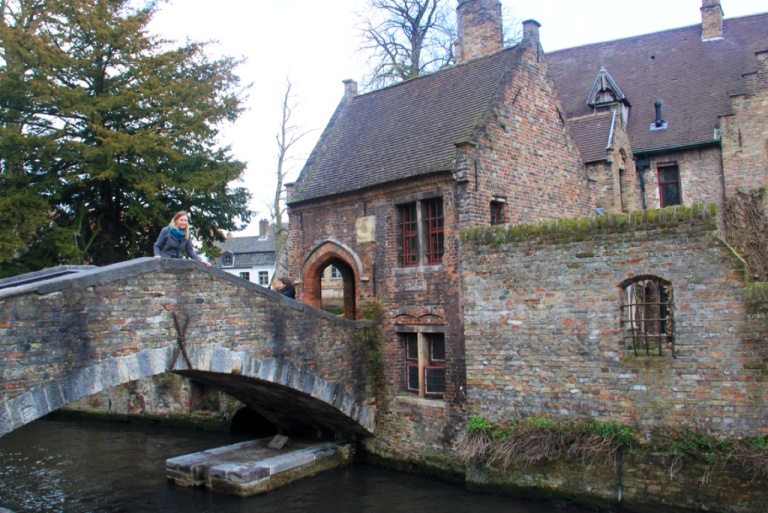 So pretty, cute little bridges, old buildings sitting in the water and loads of swans. Horse carts lined the cobbled streets and the smell of waffles filled the air! Despite being winter – still really pretty. And all this after being here for barely 10minutes so far!

Across a small bridge and through a large walled entrance, with 1778 inscribed above, we entered the Begijnhof – a UNESCO world heritage site (quite a fan of those!). Lots of white buildings, set around a tree-filled green square of grass. This is an old convent, built in the 13th century.

Further up the canal, we bumped into a couple of churches, right opposite to each other. And just up the road was the huge St Salvador Cathedral. Weaving back and forth over the bridges, we ended up in the Hof Arents gardens. This was a particularly pretty, narrow part of the canal with a small cute bridge and surrounded by some small gardens.

We were lucky – it was a really nice day. I was disappointed to read that the boats through the town don’t start running until March. Which is next weekend. So I was very surprised and excited when we saw them sailing up and down! EUR7.60 for a half hour ride in a small (crowded!) boat – but it was fun!

We didn’t have to queue at all and ended up with prime seats at the front, next to the driver, with the best unobstructed view.

We sailed south (back to the parts we had just walked along) but a different view from the water. Then to the north of the town, past rows and rows of houses with the iconic pointy roofs. The boat driver we had was funny – pointing out loads of details along the way, that you just wouldn’t notice yourself. The trip was soon over and we were back on land to continue our wandering along the canal.

The streets heading up to the main square are lined with tourist-orientated trinkets: the usual – postcards and magnets, and the local specialties – lace and chocolate! Every other shop is a chocolate shop.

All the Belgian chains are here: Godiva, Leonidas and Neuhaus. Plus a whole raft of individual chocolate makers. Some with mini factories at the back, the little chocolates and larger slaps being made by hand as you watched. The rich chocolate smell filling the air in the more expensive of the shops. Belgian chocolate is some of the most famous in the world, along with Swiss. By law, the chocolates must contain at least 35% cocoa but the percentage is usually much higher than that in the higher quality chocolates. Several shops were giving out samples – nice!

After perusing a few shops, we decided where to buy from and had fun picking out all the different flavours of shiny brown jewels to fill our box. We eventually made it to the main square – the Markt. A very old square, the Belfry (with the tall tower) on one side, the town hall on another and the other two sides lined with the traditionally shaped triangular roofed buildings. Very pretty.

But very busy – the road not being clearly marked out, so walking along you have to contend with bikes, motorbikes, normal buses, tour buses, horse carts and people on segways.

Another Belgian specialty – a friterie. In one of these ‘restaurants’ they sell a whole raft of different food items – all in a fried form! Chips, nuggets, burgers, sausages, spring rolls… We had some chips (frites!) and despite usually being called French fries, they are thought to have originated in Belgium.

We carried on wandering around the streets, passing the chocolate museum and the frites museum (!) down some cute cobbled alleyways and past more parts of the canal. And finally time for a Belgian waffle! Again a whole raft of different price points exist – from EUR1 to EUR5 seemingly dependant on your proximity to the central square. And various toppings available – from icing sugar to whipped cream with Nutella, strawberries and caramel sauce! We opted for an icing sugar one, and it was tasty!

The walk back to the train station was as pretty as this morning. Arriving slightly early for the 6pm train back to Brussels. By 7pm, we were back in the capital and ready to tackle the confusing trams again. This time we found the correct line of tram-but-follow-the-metro sign.

But in all the excitement of finding the right line (and remembering to validate a ticket), ended up going in the wrong direction. So off, switch to the other side and we finally made it back! After a short rest, out to see Brussels in the dark! The hotel was just a block or so away from the Grand Place – the main square, so we headed over. It was really busy everywhere. All the shops still open – lots of chocolate again! The square was really pretty. Lined on all 4 sides with very old and very ornate buildings. All the buildings were lit up, it was lovely.