The wind had died down, the sea nice and calm and back to being a tropical paradise!

I cycled over to the bakery – a small local shop – you can hear them making the bread in the back! Yesterday I had a cinnamon roll for breakfast (about 40p) and it was really good! Today I went overboard and bought 2 cinnamon rolls, a piece of cake and some biscuits! All for £2.30.

Sadly I had to check out of my little cabana at 10am.

So I went off for a walk back to the mangroves in search of some animals. Found a few birds and a few lizards. And ended up sitting around, on the beach and on the jetty.

I also wandered back up to the main shopping area, it was boiling, so had some shaved ice! I’ve never had this before – it’s cut up ice with a flavoured syrup poured over it. I had coconut and mango. Was tasty! 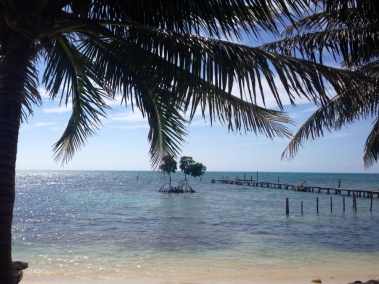 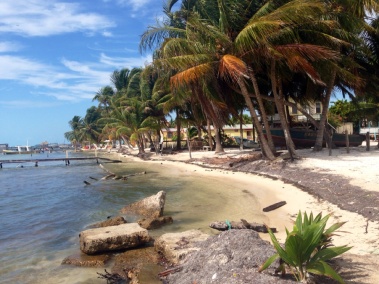 I caught the boat back to Belize City at 1.30pm.

Strange system here – you just show up with your open return ticket. No need to book.

I was a little worried there may not be space (how can they know how many people will turn up?!). But all was fine. And we speeded back for 45 minutes back to the mainland.

Back at the ferry terminal and I caught a taxi to the airport. It’s rather expensive at $25 for a 30 minute journey.

The taxi driver was rather crazy. He drove most of the time with no hands on the wheel and shouting (in a very Carribean accent) about the state of the country, the education, the money, the army, how the queen is so amazing and he loves Winston Churchill.

I was rather pleased when we finally made it to the airport!!

I’m flying to Guatemala as I cannot be bothered with the 5/6 hour bus and border crossing. How lazy!

The airport was rather basic. And lots and lots of Americans. I only had an hour to wait. And my flight only had 3 other passengers.

In the smallest plane ever.

It could probably have sat 10 people. It was so small I couldn’t even stand up. The 2 pilots sat just right infront of us! 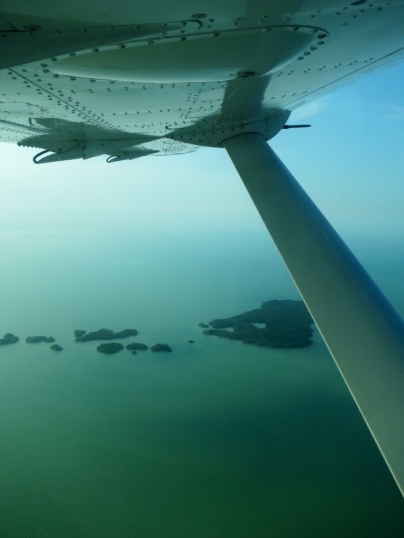 It was rather scary to begin with, being in such a small plane, but the views were great – across the sea and the Belezian islands.

Then across the jungle.

Guatemala seem to be doing a lot of burning of rainforest – huge areas being cleared away. That’s a shame.

After an hour, we came into land – with great views all across Flores Island.

Immigration was very easy and my bag was walked over to me (after a going over by the sniffer dog!).

Rather annoyingly there was no ATM at the airport. Luckily I could pay in USD for the taxi ($3) for the 5 minute drive across to Flores Island.

Flores is a small island located on the Lago de Peten Itza. I’m staying in a small hotel here, but they wouldn’t let me check in with no cash. And he spoke no English (my Spanish is questionable, but I can largely get by). He had no map and explained in Spanish…ummmmm ok.

So I went off for a walk. He had told me to take the first right, and walk 2 blocks. Or least I think that is what he had said.

I wandered around and watched a lovely sunset by the side of the lake, loads of people were swimming, kayaking and women selling cakes!! The buildings here are all cute and colourful! Lots of souvenir shops!! But no ATMs.

After asking around, turns out the ATM is inside the small supermarket. So armed with some money, I was finally allowed my room. But they had no change! Argh. After surviving on biscuits/cake all day, I headed out for some dinner. I had a vegetable curry. It was ok. Not the best meal I’ve ever had. And quite expensive at £4.80.