A rather early morning today – I was up at 4.10am. Ready to head off to Tikal!

The bus finally arrived at 4.55am.

Annoying – could have had an extra half hour in bed!!

Tikal is another Mayan site, which began construction around 700BC. It covers an area of 30 square kilometers and it is estimated that 100,000 people once lived here. Eventually the temples became covered over by soil and rainforest and lay undiscovered until 1848.

Still now, the temples and ruins are being excavated. Some temples are still lying under mounds of foliage. We started walking through the rainforest, the morning sounds of all the animals waking up – went past spider monkeys, howler monkeys and weird fluffy animals with an armadillo face and a cat tail! 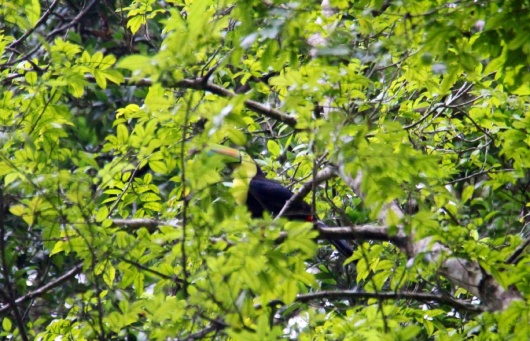 We also saw lots of toucans flying around and sitting in trees. Cute!

And lots of other different types of bird.

The first set of 4 temples we came across were fairly small. And only 1 had been uncovered. In front were a row of 9 sacrificial stones. It is possible to climb some temples. The way up is fairly easy. But on the way back down it’s quite scary – just steep stone steps with nothing to hold on to or to stop you from falling! This temple didn’t have particularly good views from the top, just a panorama of the surrounding jungle.

The Grand Plaza was a large green square. Temple 1 and Temple 2 at opposite ends. Temple 1 is the standard ‘Tikal photo’ temple. And is very pretty!

It is possible to walk the 44m to the top of Temple 2 – up a wooden staircase – for lovely views across the square. The other edges of the square are surrounded by the ruins of living quarters and of other smaller temples. All now large piles of rock!

We visited several other temples and the lost world! The largest temple – number 4, at 61m tall, is still largely hidden. A wooden staircase leads up the side and you can sit on the top. Above the canopy. Great views across the whole site – with the tips of several of the other temples visible above the trees.

It took an hour to walk back to the entrance from temple 4. Back through the rainforest. It was 11.30am by the time I got back – 5hours of walking around the 6km trail.

I was glad I had come earlier – when I was leaving, the crowds were arriving!

This time it wasn’t dark.

The route was mostly farmland. Cattle and horses grazing. Small villages and food stalls lining the roads. And the El Remate lake, which was pretty.

We got back into Flores around 2pm and I went for a walk back around the pretty colourful streets and up to the church. The church is up on a hill with lovely views all back around the lake.

I stopped around 3.30pm for a rather late lunch and had a burrito! Not particularly healthy!! A few hours of wandering around and sitting about until I caught a tuk tuk back to the airport (10Q).

One thing I have noticed about Guatemala is the presence of the army and the police. Everywhere. And all with guns. You can barely turn a street corner without spotting one or the other. Tikal had them at every ruin. Flores on every street corner. And the airport everywhere you looked.

The airport was very small – just one room to sit! I arrived at 6pm ready for my 8pm flight. Probably didn’t need to be here so early!! The plane was a fairly small propellor plane. We took off on time for the hour hop to Guatemala City.

I could have taken the night bus – but I couldn’t be bothered. And what is the point when it was fairly cheap to fly. I was very surprised when the girl came around with drinks and a sandwich and snacks!! On a 1 hour flight! Wow. I wasn’t even hungry.

Guatemala City was very bright. Lights for as far as you could see. Sprawling city. Guatemala City airport was odd. It was all dark, we walked up an escalator (which was switched off), along a very long dark corridor. Then reached immigration. Hang on – we were only on a domestic flight!! Luckily there was no queue, so I walked up to the lady and explained I have just hopped down from flores – and hence have no arrival paperwork. She looked as confused as me. And waved me on.

After I collected my bag, the queue for scanning at customs was ridiculous. No way I was going to wait in that – why do I need to?! I’m not arriving and have no customs form. So after checking with a man in charge, I circumvented the queue. I was stopped by the security man. Who spoke no English and seemed to think I needed to queue. Luckily I was saved by another security guard who was more sensible. And let me through. What a palava. Obviously don’t cater for domestic flights here!!

This city has a reputation for being not especially safe.

I’m heading to Antigua – an hours drive away. And had already prebooked a taxi through the hotel. So I was glad he was already waiting! How easy. Driving out of the city, the roads are full of new developments. Rows and rows of restaurants – McDonald’s, Pizza Hut, Burger King, another chicken place etc. all on repeat for about 10 minutes. I’ve never seen so many!!

After an hour, we arrived in Antigua. This is an old colonial city. The streets are narrow and cobbled. All the buildings old and pretty. We drove around the main square and ended up in a bit of traffic due to the Easter processions which are happening all throughout Holy Week.