Off again for another long journey day.

We had the choice of a local buses (x 2 of them) or a $7 upgrade to a private van for the whole journey. Thankfully everyone voted for the private van.

So by 8.15am we were off, leaving Copan behind and headed off into the Honduran countryside.

After a few hours we passed through San Pedro Sula. Which has one of the highest murder rates in the world. It didn’t look very exciting. But did have a very worn out looking water park (‘Wonderland’ !).

Here there are apparently 250 people who are returned back to the city every day after trying to emigrate to the US or Mexico. And a lot of crime. We didn’t stay long!

Around 1pm we stopped off for lunch at a huge buffet style restaurant. Surprisingly, it was ridiculously expensive. So I went to the bakery next door and bought a cinnamon roll! It was massive. And then I felt sick.

Back on the bus.

We arrived into La Ceiba at 4.15pm. Cutting it a bit fine for the 4.30pm ferry! We made it and as soon as we hopped on, the ferry pulled away.

It was quite a large ferry – we sat out in the open. Actually comfy seats! And it was really bumpy. I took a seasickness tablet and ate mints the whole way. Spotted a few dolphins jumping along side us. The ride was supposed to be 2 hours. Within 1 hour 10 minutes we were pulling into the dock. That was quick!!!

The island of Roatan is huge. It is 50km long and around 2-4km wide. We are staying in West End, a 20 minute taxi ride away.

West End is a small street lined with restaurants and dive shops, right next to the beach. Quite cute, but now dark. We have finally arrived at 7pm. After an 11 hour journey!

We dumped our things at the hotel and headed out for dinner at 8pm. The restaurant ended up being rubbish, and we waited an hour for our food. Then they forgot mine. So I didn’t eat. Oh well.

By the time I left at 8am, the rain had stopped. It was a short (7 minute) walk into town from where we were staying. And nothing was open! So I failed to buy any breakfast.

And I was a bit early. We left at 9am and everyone was so friendly here!! What a difference compared to Caye Caulker where the dive shop was rude and unhelpful.

The reefs of Roatan are part of the second largest barrier reef in the world (largest being the Great Barrier Reef in Australia). Surprisingly, they are protected in the Roatan Marine Park which was set up in 2005 and covers the entire island.

The first dive site was a wall. The corals are good here – lots of hard and soft corals. I found an orangutan crab and saw a small hawksbill turtle. Not much else.

Nowhere else in the world has the biodiversity of Borneo. Just nothing compares. I

t was raining when we came out of the water – and cold. So I headed back to my room for a warm shower! Then the rain stopped and headed back to the dive shop for the second dive at 11.30am.

For the second dive, we went to Turtle Crossing. The name is a bit misleading, there were no turtles. But again the corals were nice. Mostly flat, with some sandy patches. The water is very very blue and clear here. Some sunshine at last!

For lunch, I popped to a tortilla cafe next door. For $1 you could get a baleada – a flour tortilla filled with beans and cheese. It was a little bit like a Malaysian roti! Was good!

And then it started to pour down with rain again. And the last dive of the day, we headed out to another section of the reef – this one was full of swim-throughs, small caves and tunnels.

The rest of the group weren’t especially good, so for this dive I ended up with my own guide and we went through all the gaps in the corals – some parts were a bit of a tight squeeze! But it was good.

I found a solitary lionfish. Contrary to Asia, where they are common and a native species, here they are non-native and are a pest. Shame – they are cute! They are hunted here to prevent the taking over the reef and eaten.

We finished off at a shallow sandy area, full of seagrass. Perfect habitat for a seahorse or some robust (my favourite!). I tried – but didn’t see any. Apparently don’t get them here!

But I did see lots and lots of spider crabs! Never seen this particular one before! And they were everywhere!!

All the dive sites are very close – barely a 5 minute speedboat ride away. And everyone here is just so nice!!

Thankfully the water was fairly flat – so none of the ridiculousness of Caye Caulker here. Despite the diving being a little bland, I did enjoy.

By 4pm we were finished and I was knackered. So headed back to my room for a rest. Went back out again for the 6pm sunset. It was nice. Sat on the beach, then over the water. A nice orange sky.

Then went out for dinner. Again quite a lot of places were closed and it was generally quiet. Really surprising.

Off diving again! It was nice and sunny when I left. Yay! But as soon as I arrived back at the dive shop, it started to pour with rain. 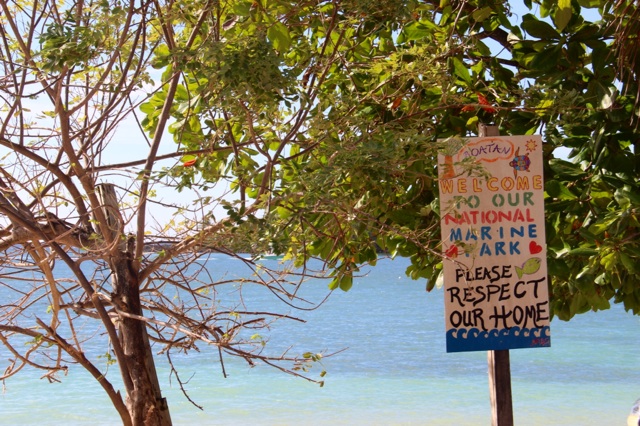 For the first dive, we went off down to the Southern tip of the island. Past the pretty West Bay beach and along to the rocky southern end. It was a wall dive – with a wreck down below around 40m. Again it was so so so blue and pretty corals. But rather lacking in creatures!

Annoyingly it was still raining when we finished.

I hadn’t had any breakfast, so went back to the Baleada cafe and had the same as yesterday – a flour tortilla with beans and cheese! These are a Honduran specialty. And I actually quite like them.

Just after I had ordered, there was torrential rain, so I ran back down the road to the dive shop and got soaked (well – I was already wet anyway!).

For the second dive, we headed off at 11.30am and headed north of the bays. Up here, there are rocky canyons – you can swim through the narrow tunnels and through the canyons. Quite cool! On the rocks there were quite a lot of lettuce slugs – I’ve never seen these before! I like cool little weird things!

And that is the end! No more diving for this trip. Rather sad. Not sure when I will next be diving. 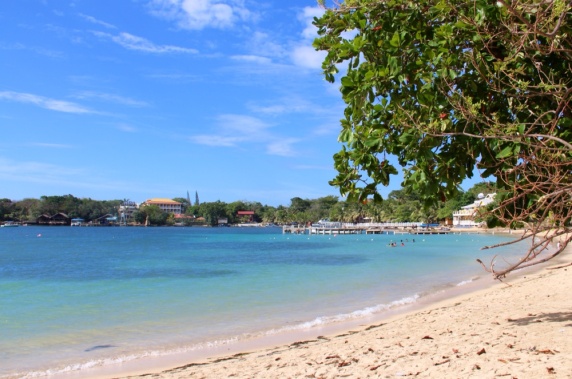 Luckily the sun came out and it was a nice sunny walk back to the hotel to start drying all my kit! I also went out for a walk – I hadn’t walked too far along the beach and the road.

All much the same – cafés, souvenir shops, dive shops – and that’s about it!! The small beach was quite pretty. And it really is fairly quiet here. I had a coconut ice lolly from the icecream shop – quite expensive at $2. And spent the rest of the afternoon doing not a lot.