Annoyingly I woke up at 5am and couldn’t sleep any longer.

We left on a mini van at 7.30am, our of the chaos that is San Jose – and my final visit to this city for this trip!

Heading towards the Caribbean coast, to the Southern end of Costa Rica.

The roads heading out of the city were fairly quiet and we were soon winding our way up through the forests and around the Pacuare area. We passed over many pretty looking bridges, through so much greenery and it began to rain.

Port workers from the port city of Limon have been protesting for wanting higher pay and better working conditions etc. Today they had planned road blocks and protests. We ended up in really slow moving traffic – several of the people protesting were in their (slow moving, to hold up the traffic!) cars waving flags and banners. The police soon rounded them up. And we were on our way again!

After coming back out of the hills, suddenly we were in plantation land. Miles upon miles of banana plantations – and fields full of containers ready to be shipped around the world!

Costa Rica exports over $850 million worth of bananas each year. And finally, after 5 hours, we arrived into Puerto Viejo! 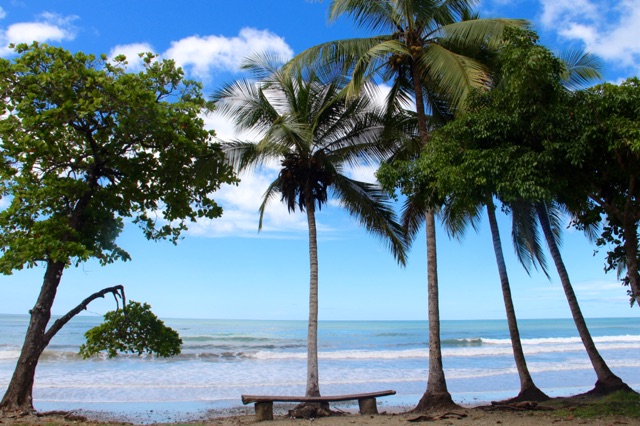 By now the rain has stopped and it was an ok afternoon! After dropping bags, we headed off into town for a wander around.

We are staying right on Playa Negro (the black sand beach). The next beach along is white! This town is such a hippie town, cool cafes, bars and shops and very backpackery.

For lunch we went to a traditional carribean restaurant. I had patacones – fried plantain, which is squashed into a disc shape, with some avocado. It was really tasty! Then to rent some bikes! $5 for the afternoon.

Although then the black vultures began to circle overhead and it became so dark, it felt like it was just about to rain. So we decided not to go far, but go and explore a bit.

We headed south out of town, the cafes and hotels and spas just continued for ages! We pulled over into a small wooded forest to look for some animals! The first spot was a cat with its two baby kittens, cute!!

Then we saw a troop of howler monkeys. Just as we were watching those, I spotted a sloth!!!! Yay!

It was a three toed sloth. Just hanging out on the tree, climbing upwards to a sitting spot. Apparently sloths only come down to the ground once a week to wee. They move very slowly and have a very slow metabolism. They are just so cute and fluffy!

After carrying on down the road, we spotted a further 5 sloths just up in the trees! These ones were much higher up though. Just balls of fur high up in the branches.

Iguanas here are huge! Over 1m long and lazing about, camouflaged on the branches. Some grey, others orange. Toucans were calling each other, so we were scanning all the tree tops and finally spotted it! I love toucans!

Then we saw a pair of toucans which were grooming each other! Love the bright yellow beaks. We saw so many birds – red headed woodpeckers,

the national bird of Costa Rica – the clay coloured thrush (quite boring really!), more turkey vultures, black vultures and a huge array of other birds that I forget the name of. We came across another troop of howler monkeys. These ones were loud!

The alpha male makes such loud noises that they can be heard from 5km away. He was letting the pack know that this was the area they were going to sleep in tonight. Apparently he will make similar noises when it is time to leave and find food tomorrow morning. The roads were winding and pretty, every now and then crossing over narrow bridges over rivers and just through beautiful scenery.

We were headed for Manzanillo national park, but as we got off to a slow start (expecting rain which never showed up!) it was getting a bit late. The roads are not lit and we did not have lights, so 5km before we got to the park, we decided to turn around and head back to town.

At some point I lost the group, I didn’t see them turn off the road. I just assumed that they were ahead of me. So I ended up back in town and went back to the hotel. Luckily they had been phoning ahead when they realised that I was missing, so were rather glad that I hadn’t fallen off a bridge. And they all arrived back about half an hour later! I was so muddy after the biking – we did 20km in total, which feels like a lot for someone who never cycles! It was really fun and we saw so many animals!

After a quick shower, back out to town for some dinner. I had a Thai red curry – can literally get everything here!! And some mojitos!

Not again, 5am. I wish I could sleep!

At 7.15am we headed off for breakfast in town. I had a massive bowl of fruit – watermelon, papaya, banana and cantaloupe. Yum! Then off to Cahuita national park. Rather annoyingly it began to rain. And did not stop all day.

We had a guide to walk us through the beach-side park. Before we had left the base we had already seen 4 iguanas, 2 other lizards, howler monkeys and a yellow eyelash pit viper!

It continued, so many animals. Vine snakes, so many massive grasshoppers, leaf cutter ants, crabs, another sloth, toucans…. Rather funny that a few days ago I was saying that I didn’t think I had ever seen an almond tree. This park was covered in them! The monkeys eat the nuts. They come enclosed in a green pod. Wow!

There were lots of other pretty flowers – red bulbs of the sour cane, waterfall lillies amongst others. We spent about an hour and a half wandering along the paths, the trees were so pretty.

Next stop – the jaguar rehabilitation centre.

This is a centre for injured animals, ones that have been inappropriately kept as pets, or for those whose mother may have been killed. They aim to look after the animals until they are old enough to be reintroduced back into the wild. And they had so much! A really cute baby ocelot! Like a mini leopard, but totally cat sized as it was only 2 months old!

I barely noticed the little baby sloth hanging in the tree. He was so cute, fluffy and so small! He was crawling down the tree and then across the ground!

His little face with a permanent smile! Wandering around were a pair of deer. They were busy chasing each other and eating all the flowers that we in sight. One of them nearly stood on the baby sloth! There were spider monkey babies, howler monkey babies, white faced monkey babies, owls, toucans, and so many snakes. One of the reasons I wanted to return to Costa Rica was that last time I didn’t get to see a red eyed tree frog.

They are so ridiculously cute. Every place I have visited has said, no they are really hard to find. You don’t get them here etc etc. But now – they do have them here! We walked around a large pond and had almost given up hope – when yes! They had one!!

These frogs are nocturnal, so during the day it was sleeping. When it is sleeping, it closes its eyes and you cannot see the red. The guide woke it up and it’s huge red eyes popped out! So cute!!! I’m so happy I finally saw one! It was now 1pm and time for lunch!

We went to a traditional carribean restaurant again, basically someone’s house at the side of the road! I had a vegetarian plate – patacones (squashed plantain), white rice, black beans avocado, salad, corn and mushrooms. It was really nice! Then onto the next stop – a cacao making family! Their house was so pretty. The garden was full of banana, plantain, guarabaya, water apples, chestnuts and achote (red coloured pods that can be used as makeup). As well as, of course, cacao.

The woman showed us how they make the chocolate. Breaking open the cacao pod, leaving the beans to dry in the sun for a week, roasting them, crushing them and removing the outer shell, then grinding into a paste. This paste is then cooked and the cacao butter can be separated out. We got to taste every stage of the process – so delicious! I love cacao!

Then lots of tasters of the final chocolate products – they were nice, but a bit gritty. Quite similar to the chocolate I make at home with cacao powder and cacao butter! And then our final stop of the day, a small hike to a waterfall. It was still raining, so rather slippery, but only a 10 minute walk down to the waterfall. It was pretty, but not really swimming weather! But I did spot a tiny little red frog! So cute! I love frogs!! We got back to the hotel at 4pm. And time to do nothing!!