We are leaving Costa Rica today – I’m so sad! I love it here!!

One final breakfast and went to a cafe called Bread and Chocolate. The selection of breakfast sounded amazing. I had a carrot and beet juice, and cinnamon oat pancakes – they were so delicious!! Then I got a mint chocolate brownie to go!

We left Puerto Viejo at 9.30am on a shuttle down to the border. The drive was through pretty banana plantations and through winding jungle roads. So pretty everywhere. It took less than an hour to arrive at the small border post.

This is not the principal border crossing, so was not full of the usual trucks waiting to pass. It was very quiet!

Firstly we had to pay $8 at a small booth as an exit tax. It was basically a stand in someone’s shop. If I was not with someone who had done this before, I really would not have noticed this little stall!! 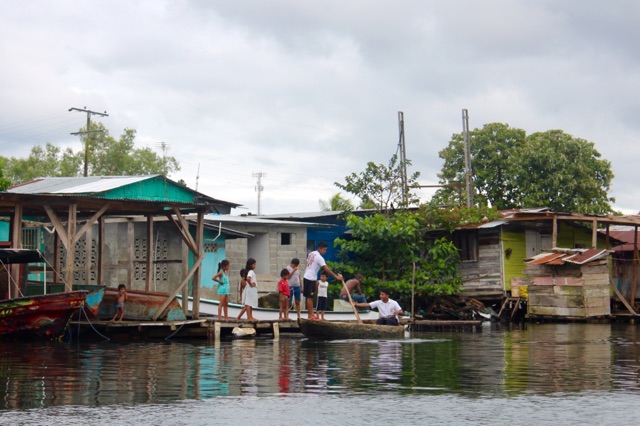 Then up to the main office to fill out an exit form and get stamped out. The border is at a river, with a very old bridge running across.

A metal bridge with an old railway running across and made from wooden planks. And many of the planks are missing! It was funny – but I was a bit worried about falling right through!

Once we were over the other side, we had to pay $3 for a small sticker in our passports from some guys in a wooden shed. Then walk to the main passport office for the official stamp.

The scenery was really similar here – banana plantations, small villages and forests. We drove for about half an hour before stopping at a small dock at Almirante. From here we are catching a boat taxi across to Bocas del Toro.

The little water village was cute – small wooden houses on stilts, people in small rowing boats and children waving to us. The crossing began quite smoothly, then became rather choppy. And we got rather wet. It took just over 20 minutes to reach the town of Bocas del Toro on the island of Colon and was 2pm when we arrived.

As well as being the name of the town, the island area is also called Bocas Del Toro, which means the bull’s mouth.

The area is comprised of 6 main islands and several other small islets. Panama’s oldest marine park is here. The town is small and cute. Some of it is built out onto the water. Colourful wooden buildings, many of which were built by the United Fruit company in the early 20th century.

We are staying in a traditional house right next to a colourful park – Parque Simon Bolivar. We dropped our bags, then went out for a walk. The Main Street was wide and touristy – cafes, restaurants, juice stands, supermarkets and dive shops. We bought some falafel pitta breads from one of the food stands – $5 and really tasty! 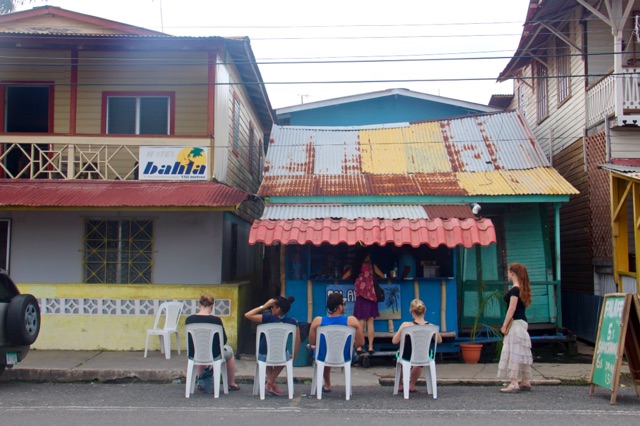 Then went to book some trips for the following couple of days. For the rest of the afternoon, we sat in a really nice, pretty bar and had a few drinks. For dinner we went to a large outdoor restaurant, some people were running a fire show as well. We went to one of the over-water bars for a drink. I didn’t stay out late tonight.

There are a couple of cute bakeries here, so for breakfast I had a small banana muffin! We were all going off for a day trip on a boat today, around a few of the neighbouring islands. We left at 10am and it was beginning to be a nice sunny day!

Makes a change from the rain of the past few days.

We headed off into the bay of Dolphins, sadly no Dolphins. But did stop nearby some of the small jungle-covered islets to spot a couple of three toed sloth. They were just hanging out in the trees – cute! It took another half an hour to make it all the way to Cayos Zapatillas, two small untouched, Palm covered islands.

We decamped out onto the beach. So pretty. 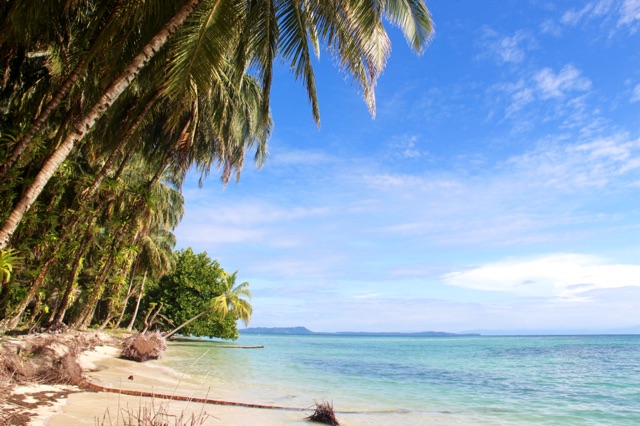 The reason we came here – to go deep boarding. A new activity – and right now you can only do it in Panama. You hold onto a curved plastic board, wear a mask and snorkel, and get dragged behind a boat. With the board you can angle it downwards and it pulls you down underwater. It’s really easy.

We began going quite slowly, which was good – the water wasn’t that deep – we only got to about 3 meters. But there was nothing to look at – just dead reef! After a while we started to go really fast – and it felt horrible.

The water was a bit rougher and my shorts began to get a bit loose. I managed to keep pulling them up, but as the water got rougher, as I only had one hand on the board, it was too rough I ended up letting go by accident.

We were a long way out from the island. I half thought the boat might come back and pick me up. I began to swim after it anyway. But no. They didn’t pick me up.

So lucky I can swim well – and swum back to the island. It took me about 15 minutes to get back.

Then spent the next while wandering around the beach.

For lunch, we headed along the beach to the benches. We had some tomato pasta and pineapple. Then off for a walk around the island. There was a board walk which ran through the centre of the island, palms gave way to mangroves. We walked for about half an hour. I was surprised how large the island was! Then we popped out at the northern end onto the most perfect tropical beach.

It couldn’t have looked more perfect. We spent the next half hour marvelling at the beach as we made our way back to the southern end of the island, picking our way over fallen palms and wading through the lapping waves of crystal clear waters. We left the island about 3pm and made a stop for some snorkelling. I hate snorkelling. I find it so boring.

But I jumped in to have a look. More, mostly dead, reef. I saw a stingray. That’s all. Then I was bored and got back in the boat!

We finally got back to Bocas town at 5.30pm. A quick shower, then we headed off for dinner. We went to a restaurant called ‘raw’. Sadly that didn’t mean raw food. It was an Asian restaurant, I had noodles and vegetables which were really tasty! And passion fruit juice – wow!! Each evening has a different bar-to-be. Tonight it was across at another island. It cost $1 per person to cross over to Isla Carenero, barely a 5 minute ride across the water. Here the bar was really cool – swimming areas, swings over the water, a trampoline etc. Rather oddly, most bars also seem to do free drinks for girls! So I didn’t have to buy any drinks all night. They were also ridiculously strong. It seemed a good idea at the time….