I had some soy milk and oats for breakfast – the soy milk here is so good! Apparently there are different flavours, but I’ve only seen plain so far.

We left at 8am and headed onto the metro down to Namba station – another large train station in Osaka. It was busy, Japanese rush hour.

Confusingly, the metro station and the train station, despite having the same name, were not in the same place. We came out of the metro and had to walk across several streets before we reached the train station. But we were very early for our 9.30am train, so had a rather long wait.

The train departed exactly on time, and was 50 minutes to get to the stop we wanted.

The city is huge. Miles and miles and miles of grey houses with 1 tree in their small yard. We had to change onto a second train, literally walking across the platform and straight onto the next one. This train headed up hill, through pine forests and past small villages and farms. Then onto a funicular, headed up Mount Koya. And then finally a bus. Everything just worked. The whole journey from Namba all the way to out destination of Koyasan – every piece of transport was there waiting for everyone and ran exactly to time.

Today we are staying at a monastery. We were met by the monks and dropped our bags off. We aren’t able to check into our rooms until later!

Koyasan is Japan’s centre of Buddhism, with 110 temples located here. The Buddhist community was established in 816 by someone called Kūkai (known after his death as Kōbō Daishi), who is 6 one of Japan’s most famous religious figures. After a quick visit to a temple next door, full of red flags and Buddha paintings, we were back onto the bus which took us to the other end of the town.

The town is only 4km long, so is pretty small. We stopped off for lunch in a small local cafe. There was nothing I could eat. So they gave me a bowl of plain rice, with some local tofu. Except it’s not really tofu, it’s made from sesame seeds and a plant starch. It had the consistency of set yoghurt. It was ok.

From here, we entered into the Oku-no-in Cemetery. The cemetery is huge and this end of it is the more modern end. As the cemetery contains the mausoleum of Kobo Daishi, everyone wants a shrine here. Even large corporations – a coffee company, tech companies, people have shrines for their pets etc. Everyone wants to ensure pole position when the Buddha of the Future (Miroku Buddha) comes to earth, as they are expected to arrive on this mountain. The cemetery is packed with cedar trees and shrines. Some are very old and covered in moss. Some little statues are dressed in bibs. Apparently if someone loses a child, they will often adopt a small stone statue and ensure to dress it.

After wandering around, we jumped back on the bus to the other end of the town to a large temple complex. Here were pretty red bridges, lots of smaller temple buildings, a small pagoda, and a large red cylindrical temple (Koyasan Danji Garan) which was a really cool shape!

A bit further along the road was the Kongōbu-ji Buddhist temple. This is the headquarters of the Shingon sect and the residence of Kōya-san’s abbot. It was built in the 19th century and contains paper screens that were painted in thee 16th century. These ran along all the walls and the floors were also paper. We had to take our shoes off and were given slippers to wear. Problem is, they were too big and kept falling off as I walked. So annoying.

In one of the rooms, we were served some green tea and a sweet rice cake! That was nice.

In the temple grounds is also one of the largest rock zen gardens in Japan. There are larger rocks, surrounded by pebbles. The pebbles have been raked in lines, which turn into swirls around the base of each of the larger rocks. It was quite cool. This is supposed to illustrate the flow of water. From here, we headed back to our monastery. Down the cute, but deserted main street of the town. 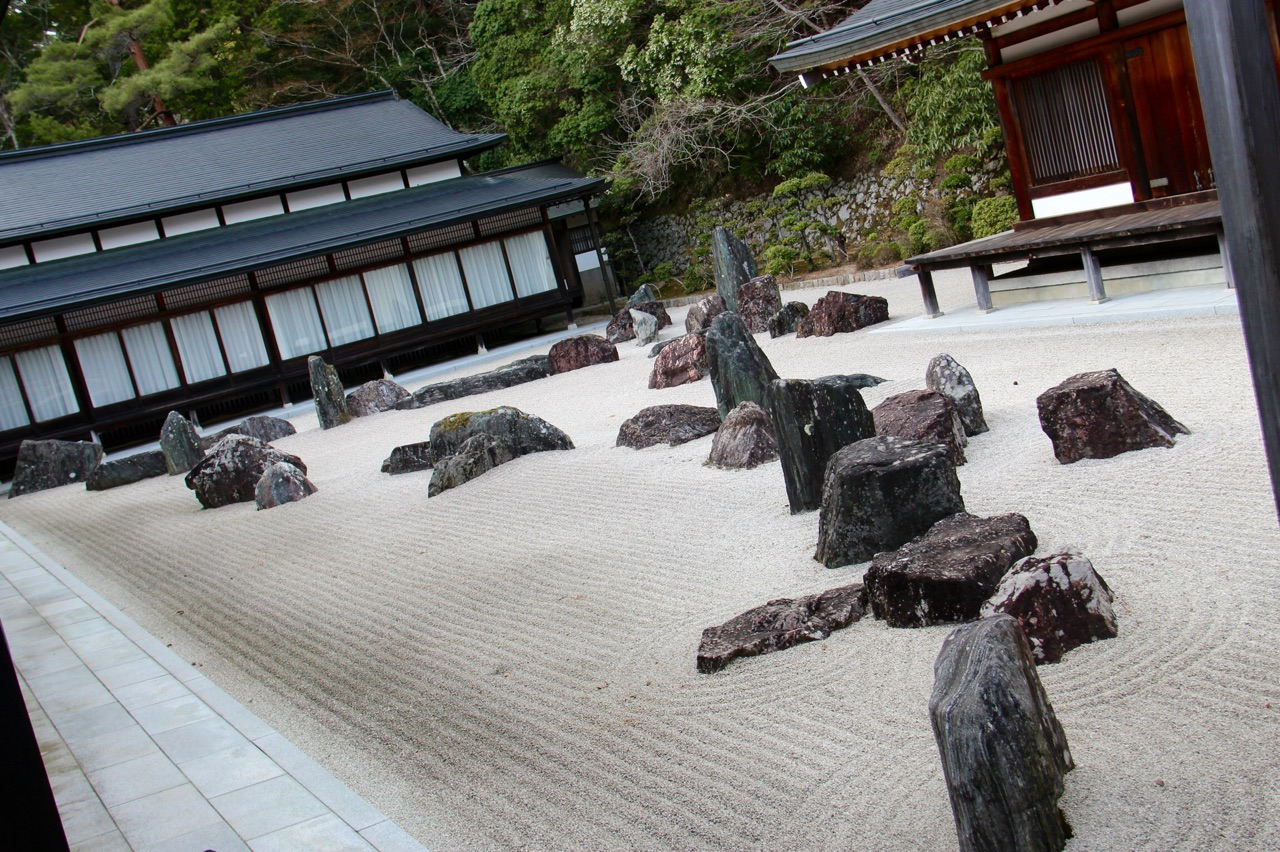 A couple of odd things so far; there are vending machines everywhere and selling everything (not seen anything weird in them yet though). All cars and trucks are small square boxes. They are so small. We were now able to check in. Our room was relatively nice, a paper floor, paper walls and a table in the middle. They had even left some tea and little cakes for us. The best part – a small heater. I was so cold.

The bathrooms were shared. There were toilets (which we cool – as you entered the cubicle, the light came on, the toilet lid came up and it was warm! It automatically flushes and the lid goes down and it cleans itself. Amazing). And there were also shared baths, but I didn’t use those….

At 4.30pm there was a meditation session. We went off to a room slightly up the hill and were each given a cushion. We were told to imagine a full moon. And count to 10 as we sat on the floor. Then they left us for half an hour. I was rather bored. Not really into this breathing and counting thing….

Monasteries serve a shojin-ryori style of food. No eggs, no dairy, no meat, no fish and no onions. Perfect! It was served on two trays, sitting on the floor. So many little dishes – sesame tofu (goma dofu), green tea, soba noodle vegetable soup, miso soup, pickled vegetables, pineapple, freeze dried tofu (Koya-dofu), tempura vegetables, konnyaku (a black jelly made from a type of potato)…!

It was all pretty good, but some of the things were a bit weird. After dinner, we layered up a bit more. That meant 3 pairs of socks. 3 leggings. 3 t shirts. 2 jumpers. Coat. Scarf. Gloves and hat.

And went out for a night walk in the cemetery. We headed into the cemetery by a different entrance this time, in the old section. We stopped every now and then while the monk told us stories about Kobo Daishi (they are all rather obsessed with him). We walked up a flight of stairs, apparently if you trip you will die in the next 3 years. Knowing how awkward I am, I thought I would probably trip. But surprisingly I didn’t!

After a while, we reached a bridge called Mimyo-no-hashi. Before walking on this bridge we had to use a bamboo scoop to ladle water from the river and pour it over the nearby Jizō statues as an offering. Once over the bridge, we were met with the temple called Tōrō-dō. Around the outside were hundreds and hundreds of small lit up lamps. It was really pretty! Inside are apparently even more lamps and two of these are thought to have been burning for more than 900 years.

Behind the temple are the closed doors of the Kōbō Daishi (Kūkai) mausoleum. It is thought that he entered the room to meditate and never left. No one is allowed to go inside except the head monk. While standing outside, the monk we were with did a bit of chanting. While we were told to stand still and listen. The walk back seemed to take forever. I didn’t realise we had walked 2km into the graveyard. So it was of course 2km to get back out again!

We arrived back about 9pm and went straight to bed. In all my clothes. So cold.