We headed off at 8.30am this morning. After a detour to buy some cough sweets (annoyingly I have a sore throat), we were on a train headed to Miyajima.

It took about half an hour and once we reached the station, there was a short walk to a ferry terminal.

I have a Japan Rail pass for a week and all these trains and ferries are included on the pass, so no need to pay anything additional – pretty handy!

The ferry took about 20 minutes to sail across towards Miyajima island. This island is a UNESCO world heritage site and one of the most popular sights of Japan. Being listed as one of the best three views in the country.

Once off the ferry, we began to walk along the shoreline. Wandering around were lots of deer. These deer are allowed to roam free as they are believed to be messengers of a Buddha. They seemed friendly enough, particularly if you had food or paper. Then they would chase after you for it.

Just off the shore line is the vermilion coloured torii gate which this island is famous for. A gate which looks like it is floating on the water, which a pretty green hilly background in the distance. It was pretty.

The gate belongs to the temple of Itsukushima-jinja. This temple is also floating on water, like a pier. And was packed full of people it was difficult to move. There was even a wedding taking place here. The island used to be considered sacred and commoners were not allowed to set foot on the island and had to approach by boat through the torii gate in the bay. The temple itself was really pretty. Just behind was a 5 storey pagoda.

Once we had left the temple, we were in a small square. On one side of the square was a small beach – again with great views of the temple. And now a music and dance show had started in the temple! The other side were some more small stone temple buildings. And on another side was a row of shops selling touristy things. I went for a wander down some of the streets. 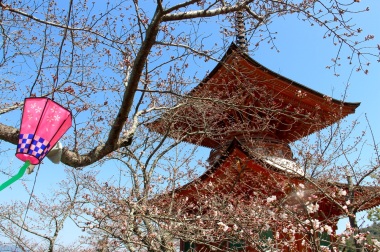 The cherry blossoms were starting to come out, but we were a bit early to see them in full bloom. I headed up a small hill to another temple and had some great views back across the island and the temple. And the torii gate, through the cherry blossom branches. We hung around here for a bit before heading off up another hill – and a lot of stairs – to Daishō-in Buddhist temple.

Again lots of pretty temple buildings, scattered along the path up the hill. These had prayer wheels – the only ones I saw whilst in Japan. And a large collection of Buddhas. This temple was much more similar to the ones in Nepal.

There was a small underground passage way that you can walk along, looking at illuminated Buddha statues. I went down and into the passage way, but it was far too dark and narrow for me, so I left pretty quickly!

From here we walked through a small forested area, which was totally deserted. We barely saw another person. Just a few deer. Wandering past small shines and torii gates. It was pretty.

Miyajima island has a peak – Mount Misen – which is actually only 530m tall. To get to the top of Mount Misen it is possible to hike, but we didn’t really have time for that. The other option is a rather expensive cable car (1,900, £12) which they like to call a ‘rope way’ and which gets you most of the way. But there is still an hours hike at the top. We eventually found the cable car station, and there was quite a queue. It moved relatively quickly as they were packing people into the tiny pods. 8 people in each one – we were crammed in and it was rather claustrophobic.

It took about 10 minutes to reach the halfway point. Gliding high above the forest. Here, we had to swap onto a different cable car. This one was much larger and standing room only. And they crammed about 30 people into this one!

From this pod, we had a great view of the surrounding water and islands. And we finally made it up. From here, we had to walk up and down stairs and hills along the top of the mountain, through the forest. We passed small shrines along the way. And quite a few inappropriately dressed people, with heels on.

We reached a clearing, a paved circular area surrounded by temple buildings. Here is a temple where Kōbō Daishi meditated for 100 days following his return from China in the 9th century. This guy has been everywhere it seems. Next to the main temple hall is a flame that has apparently been burning continually since Kōbō Daishi lit it 1,200 years ago.

We continued upwards, up more steps. And eventually clambering over large boulders. And we made it to the top!

At the top, they have built a small lookout point that you can climb for even better views of the surroundings. You can see islands (and the mainland!) in all directions. It was a really nice sunny day, so the views were really pretty. By the time we walked back along the top of the mountain and came back down the two cable cars it was 3pm and I was so hungry.

On the walk back to the ferry terminal we passed some food stalls. They were all selling fish on sticks (yuck). And corn! Yay! I bought a piece of corn (£2 – so expensive) and they proceeded to put it on the fish grill. Oh no. And then sprinkle stuff all over it. Eugh. So after a bit of gesturing, they worked out that I wanted a plain one, without all the salt and fish flakes. Thank god. It was good in the end.

We also walked through a street of shops. Here they were selling lots of rice spoons – apparently this island is where the rice spoon was invented! And there is a large wooden statue of the largest rice spoon in the world…! They were also selling lots of the island specialty – small maple leaf shaped cakes. These are a sponge outer, surrounding a filling. The fillings were either custard or red bean, or variations of that. I didn’t have one as they contain eggs. Other popular island ‘foods’ include oysters and eels.

The journey back was the same – ferry, then (a packed) train to Hiroshima. It was about 5pm by the time we arrived back.

Apparently there was a supermarket beneath the train station. Once I had found it, it was incredible! Fruit, vegetables, packaged food, lots of mochi, rice crackers, and all the flavoured soy milks!! I went a bit mad buying loads of food. I was starving having barely eaten all day. And 4 flavours of soy milk – icecream, creme caramel, peach and a random orange coloured one (turned out to be orange flavoured!). I wish I had bought more of them…! And I wish I had known this yesterday! For the rest of the evening, I did nothing. Apart from eat some vegetables, pineapple and lots of soy milk. They are all so good!