It’s been a while since I last trained legs (after not being able to exercise for nearly 2 months). And it was showing. Walking was a struggle.

I had planned on going to the gym again this morning, but that wasn’t happening now. So instead, went for breakfast at a vegan cafe (another one..!). This was only 5 minutes walk away. The whole cafe was really smart, full of trees, plants and flowers. It was cute. And the food was awesome. Of course I got a smoothie bowl (dragonfruit..so it was bright pink), a green juice and a turmeric shot. So good.

After a final swim, I got a taxi to my next destination – Ubud.

I’ve been to Ubud a couple of times before (2011 and 2013), but had a few spare days, so thought I would pop back again. The drive was pretty. We didn’t go along the main highway. Instead, through all the backstreets. Past lots of villages. The whole way was pretty developed (no countryside) templates scattered between the houses and very small patches of rice fields. It took just over an hour, but then had trouble finding the guesthouse.

Because cars can’t get to it. The last 10 minutes is a walk along a small path in rice fields. Not pleasant with my ridiculous amount of luggage!!

But my room was awesome – on the first floor, with a huge balcony, looking out across rice fields and a hill covered in palm trees.

By now it was 1pm and lunchtime. Ubud has so many vegan/vegetarian options. A lot of western places. But also all the local warangs have several options. I was getting fed up of expensive western food. That’s not why I came here! I wanted local food. So I went for a long walk through the main part of town and all the way to the otherside. Enroute I found the coconut icecream shop. Icecream made from coconut milk. And woah. The best icecream I have probably had ever. They top it with young coconut meat and coconut sugar brittle. Just so delicious. I also stopped off and bought some fruit from a fruit van man. I got a dragonfruit, some bananas and jackfruit, for later.

I was slightly out of the touristy area. Along a street full of small local warangs – plastic chairs on the side of the street. My favourite. One of them was totally vegan. And I ordered nasi campur. Of course. It was the best. Brown rice, vegetable curries, green vegetables, tempeh, spicy sambal. So good. And relatively cheap – £2. 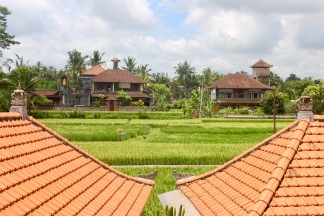 I walked back into town, visited several temples and the market.

For the rest of the afternoon, I hung out at the pool. Went for another massage at a small spa nearby. And watched the sunset over the rice terraces from the front of the hotel. So pretty.

I had breakfast at the hotel. They made a vegan nasi goreng for me – was really good. If a bit oily (I don’t eat oil..). And I went off for a walk.

I didn’t do this walk last time – the Campuhan ridge walk. It starts off by an old temple, then heads up a small hill. Once you are walking along the top of the hill, there are lovely views to the surrounding greenery. It was pretty hot already. And so pretty. At the end of the pathway is a small village. Small houses set amongst more rice fields. And a spa.

I had an appointment at the spa for 9am. It was so cute. Several ponds full of lily pads and flowers dotted around everywhere. I had my own little room, complete with a fountain and again full of plants and flowers. It was really nice. After having a massage (I know, fourth one of four days…), I had a flower bath.

I thought the pictures looked pretty, but I didn’t know it was going to be so much fun. Sitting in a bath of flowers. It was so cool! Loved it.

From here I walked back to town. It took nearly an hour. But enroute I spotted a raw vegan icecream stall. Yes. I got mint chocolate chip in a vegan cone. It was amazing.

I walked down a few different roads to see what there was around. Gone are most of the arty shops and the shop selling small wooden trinkets – like spoons, bowls, plates etc etc. Replaced by western style cafes and western shops (accessorize, pandora etc). Such a shame.

There are so many western vegan cafes here. One of them is raw. And I’ve seen amazing looking food on instagram. So I’m breaking my local food rule already and going back to western food for one meal. The cafe is called Seeds of Life. The whole menu looked good, but I already knew what I wanted. I ordered a raw Mexican lasagne and a smoothie jar. The lasagne was crazy. A red base, made from beetroot and I have no idea what else. A dehydrated taco layer. Cashew cream. Spinach. Mango. Vegan Parmesan. It was ridiculously delicious. And much more than just raw vegetables plonked together. Raw food can be so creative. My smoothie jar as equally amazing – layers of a cardamom flavoured chia pudding and pink dragonfruit smoothie. With lumps of mango and dragon fruit. And on top – dehydrated bananas and a dehydrated raw musli bar. Like woah. I need to buy a dehydrator. I way over ordered. It was far too much food. But it was so delicious I couldn’t leave it. I felt like I was going to explode!

I walked slowly back to my guesthouse. Via the market again. And this time I got lucky – I found a stall selling bowls made from coconuts! And spoons. I bartered in Indonesian and we had a little chat. She said my Indonesian was good, which was nice of her. I am not as good as I used to be!

For the rest of the afternoon I hung out in the pool. It was just so hot. And my legs hurt so much..! I was still so full from lunch that I didn’t feel like eating anything this evening. So just hung out watching the sunset over the rice fields and had (another) early night.