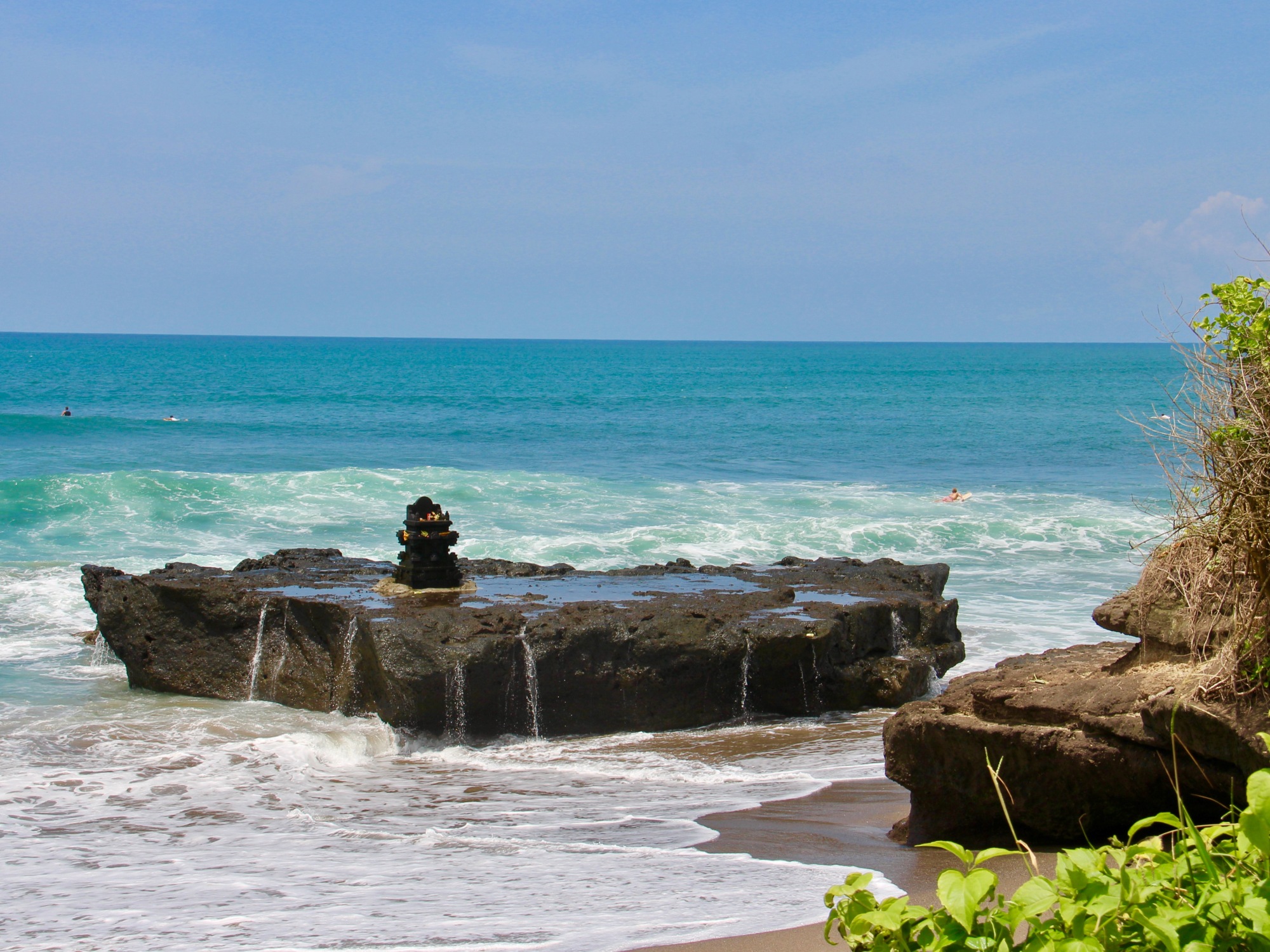 Despite not much sleep, I was up at 7am and unable to sleep.

So I went and sat by the pool and had some fruit for breakfast (mango, watermelon and papaya) so good! I’m staying right opposite a functional gym which runs classes throughout the day. (Pretty much the reason I chose this place to stay…). I went to the 9am class and ended up being the only person there. It was so hot. And so hard to exercise in the heat. Not particularly fun. Which was a shame, as I was really looking forward to it.

So after a cool down swim, I went for a walk along the beach. The beaches along Canggu are very popular with surfers. So many of them. And dotted along the coast were small cafes and small temples. The sand was a dirty brown and generally not that exciting, unless you are surfing. And I can’t surf…!

I ended up walking much further than I had planned. And not too far from a vegan cafe I wanted to visit for lunch. It was so hot. And I needed to eat. So I walked the remaining 20 minutes inland, through small rice fields and past numerous touristy villas.

And lunch was amazing. I got a vegan nasi campur. Nasi campur (means mixed rice) and used to be one of my favourites because you don’t need to choose what you want – you just get a bit of everything! The vegan version was; brown rice, spicy fried tempeh, green vegetables, a vegetable curry, coconut bits, baked jackfruit, vegetable pakora and sate tofu. Like woah. Ok, so I was in a completely touristy cafe. And it was so expensive – £9 (Rp150k).

The previous times I’ve been in Bali I would never have let myself eat in a place like this, preferring to eat at places where food costs Rp10-15k. 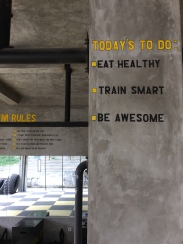 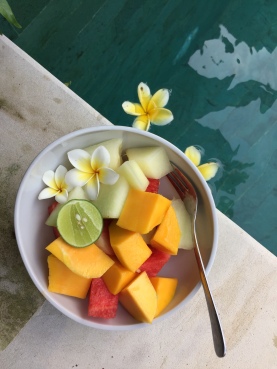 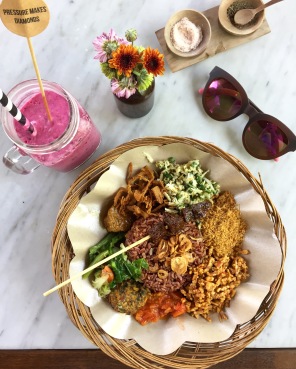 I didn’t fancy walking 40 minutes back to the guesthouse. So needed transport.

There is a new app across Indonesia called go-jek, which are motorbikes which will do anything for you. You can ride with them, they will pick up takeaway, go shopping for you etc. Motorbikes are called ojek here, so it’s a cute name!

I tried to use it, but it didn’t seem to be working. So 20 minutes of wandering around, past numerous western style cafes, and I finally managed to get a driver! Lots of places across Bali are not happy with the app, so don’t let the drivers pick up in certain areas (similarly to uber).

The drive was pretty, weaving through small roads, past ricefields and small houses. And was pretty cheap – just £1.

Massage places are ubiquitous across Bali. And Canggu is no different. There was a nice looking place near to where I was staying, charging £8 for an hour. Rather cheap. So I thought I would try it out. I’ve only ever had 2 massages before. And find the whole process rather uncomfortable.

But actually it was pretty good. A Balinese massage uses oil. So afterwards I was covered in coconut oil which was a bit annoying.

I’m all for being busy. And after a couple of hours laying down resting, I hired a driver to take me to a nearby coastal temple – Tanah Lot. I’ve wanted to visit this temple every time I have been in Bali. But never got round to it. On the advice of the guesthouse, we left at 5.30pm. Which was a bit late really. It was a half hour drive and by the time I got there, the orange sky was starting to disappear. And crowds of Chinese people were already leaving.

The whole temple area was huge. First a large touristy art market selling the usual – paintings, sarongs, weird statues and some food. Once past that, it was confusing to know where to go. Particularly as the sunset was fast disappearing. But I managed to get a nice spot along the beach. But a massive shame that I was so late and missed the orange sky.

The temple sits on a rock, just off the coastline. So at high tide it looks like it is floating in the sea. Today was low tide, so you could walk to the temple and along the beach to see each side of it. Despite being so annoyed that I had missed the sunset, the sky did start turning pink. So it was pretty in the end. 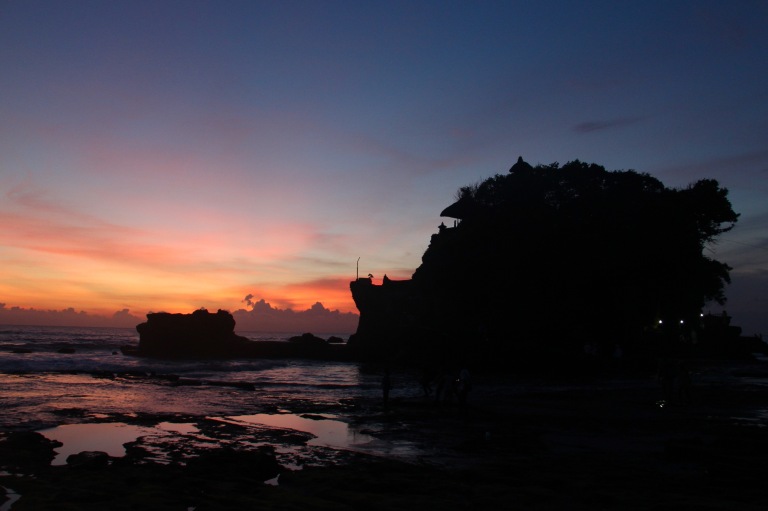 The traffic was chaotic on the way back, so it was nearly 7.30pm by the time I got back. And we hungry. I didn’t fancy going out for dinner in the dark (staying fairly remote, down a dirt path in the middle of rice fields). So used a go-jek (!) and ordered a tempeh wrap from a vegan cafe nearby! It was delicious.

I was up early and back at the gym for 7.30am. And again, I was the only one. Feeling much better today, so managed to put more effort in, but it was so hard. The gym is partially outside, obviously no aircon, so it’s very very hot. Which makes working out so much harder. So I needed another sit in the pool after that.

Also needed an ATM. So went for a (very hot) walk around. I eventually found an ATM. And right next to a smoothie bowl cafe I wanted to come to! Nalu bowls. Again crazy expensive. £4. Which ok may not sound expensive. But it’s expensive for here.

It was good though – had a dragonfruit and banana smoothie, topped with granola, coconut, banana, mango and strawberries. The bowls are cute and come in a coconut shell.

I wandered to the main area of Canggu. Which is a small rice field, surrounded by western cafes. Obviously. I was surprised to find a Cafe Organic here. This is a vegetarian cafe based in Seminyak and is incredibly popular. Apparently they opened here 3 days ago. And it was totally empty. So I decided to have an early lunch (always eating…) of pancakes. They were so good! I only managed half, so took the other half for later!

The rest of the afternoon I did nothing.

Went in the pool.

Went for another £8 massage next door (feels so indulgent going everyday!). And sat around.

At 6pm I went back to the gym. Typical me. There was a sunset yoga class and it was free because they were trying out a new style. Yoga sculpt. Yoga with added weights and cardio sections! I was surprised that it was jam packed. 40 people. And I got the last space. It was fun. But so sweaty. It was still hot and I was dripping..! Most of the people there seemed to be yoga regulars. I obviously am not. But it was pretty do-able. After that, I couldn’t move. And went straight to bed! 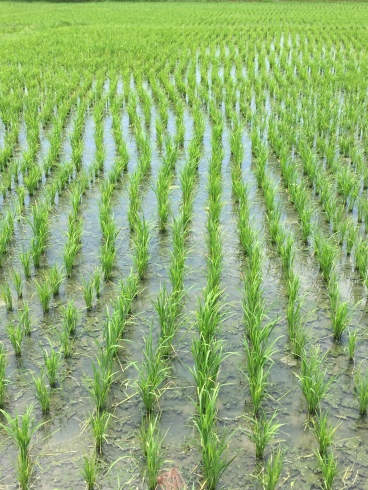 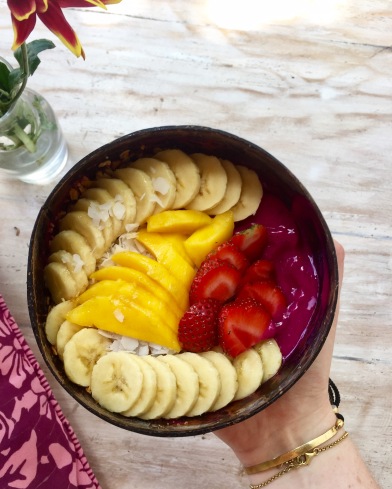