I was woken at 1am by the loud anchor being taken up as we started to set sail, away from San Cristobal.
It was choppy. We were swaying back side to side and I was largely awake on and off for the rest of the night.
At 6am we stopped sailing and the noisy anchor went back down. We were parked up in the Itabaca channel, between Baltra and Santa Cruz islands. Bright blue waters.
This is the busy strip of water separating Santa Cruz Island (where the majority of the population live) with Baltra island (where the airport is located). There were several shipping container carriers parked up also.
After some breakfast (granola and pineapple juice) we were off diving. For the first proper dive of the trip, along the side of Santa Cruz – at Punta Carrion.
Diving in the Galapagos is famous for rich marine life. This is a result of four major ocean currents colliding here and brining over 500 species fish.
Diving along the rocks, the visibility wasn’t great. We saw 4 devil rays – cute! Lots of white tip reef sharks, couple of green turtles, small diamond sting ray (lots of sting rays here have lost their tails. Odd. Perhaps due to the large numbers of sharks).
We were going again in less than an hour. Totally not worth the hassle of taking my wetsuit off. So I sat up on the roof, with half a wetsuit on. The kitchen had even made me a milk-free hot chocolate! How nice of them! (I was disappointed that there was none for me when we finished diving last night!). 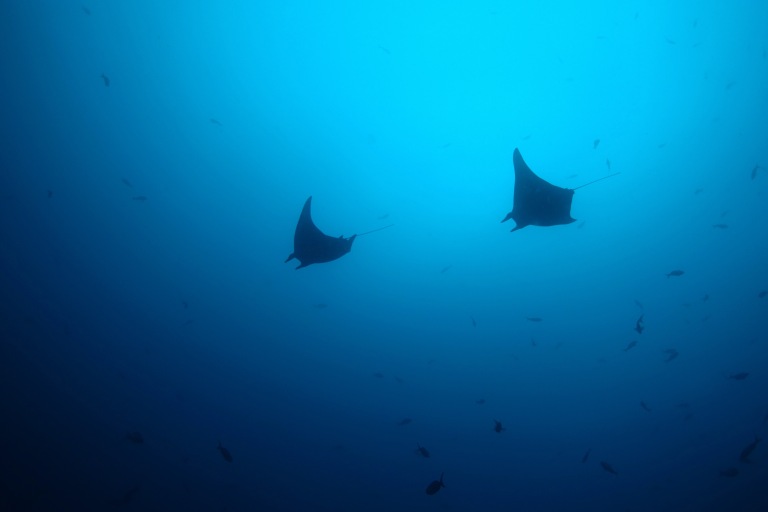 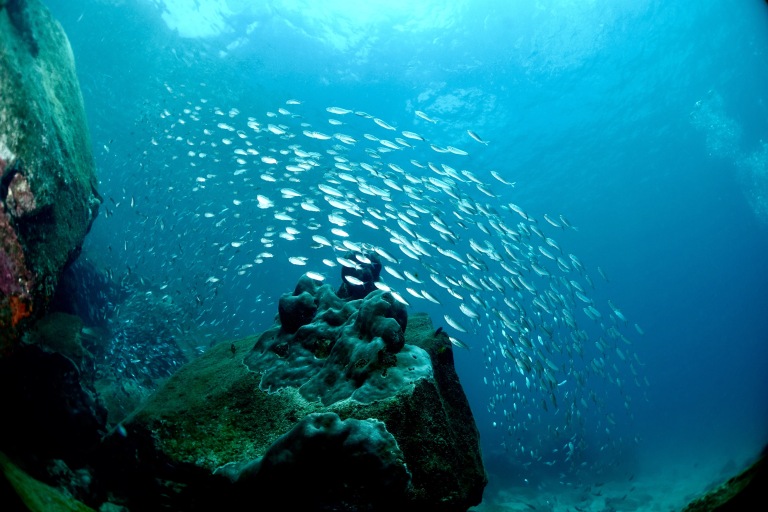 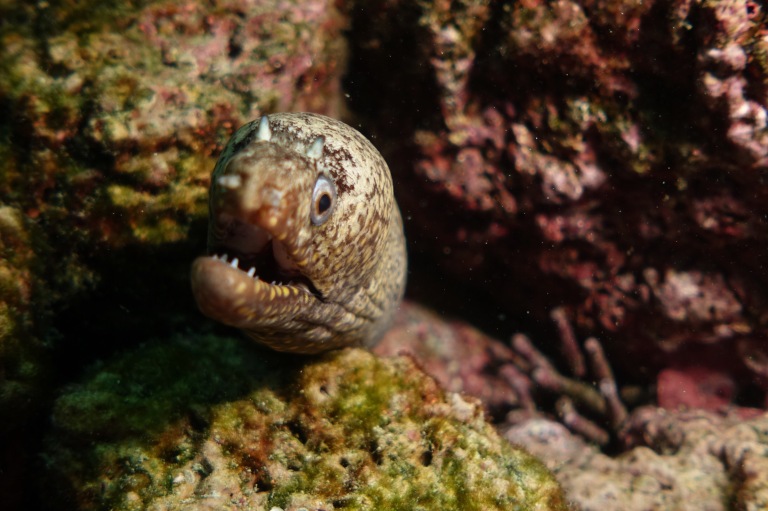 Then off again.
Luckily negative entry (where you roll backwards with no air in your BCD and immediately descend) here doesn’t actually mean negative entry. You can pop back up to collect your camera from the panga, before quickly dropping back down. Awesome.
Again this dive was similar. A couple of small silky sharks right as we dropped in. Never seen that species before! A few eagle rays. A green turtle. A devil ray. And again similar schools of fish. It was good, but nothing spectacular. My photos are rubbish due to the very silty water.
It was easy diving, but I found myself being quite awkward. If I can, I never use a wetsuit. I use only several layers of tops. So diving in a 5mm wetsuit, layered over two tops, hood and socks, I felt like an awkward whale. The water was a chilly 22 degree C, so layers were needed. Despite being right on the equator, it’s a bit chilly. This is because of the converging oceanic currents, it creates an environment which is surprisingly not tropical.
Back on board and time for lunch. Always food…!
This time they were well prepared for vegan food – I was given a special plate of rice and beans! Awesome. Along with some vegetables and salad. Delicious.
I was really excited about the afternoon (more excited about a land trip than a dive…!). We were at North Seymour island. A 1.9 square km island, which is completely flat. There is a 2.5km trail leading around, through palo santo trees. And hundreds of birds.
The panga boat dropped us off – a clamber up several slippery rocks. Then an amazing walk across an orange coloured, dry, rocky landscape. And everywhere were birds. There is year round nesting here.
I was most excited about the frigates – with their red breasts. Males puff their red pouches when trying to impress females. And there were so many puffed ones! There are two species of frigate, great frigate (green-tinged feathers on their backs) and magnificent frigate (purple-timed feathers on their backs). Some had nests, with a smaller fluffy white bird being sheltered by a parent. 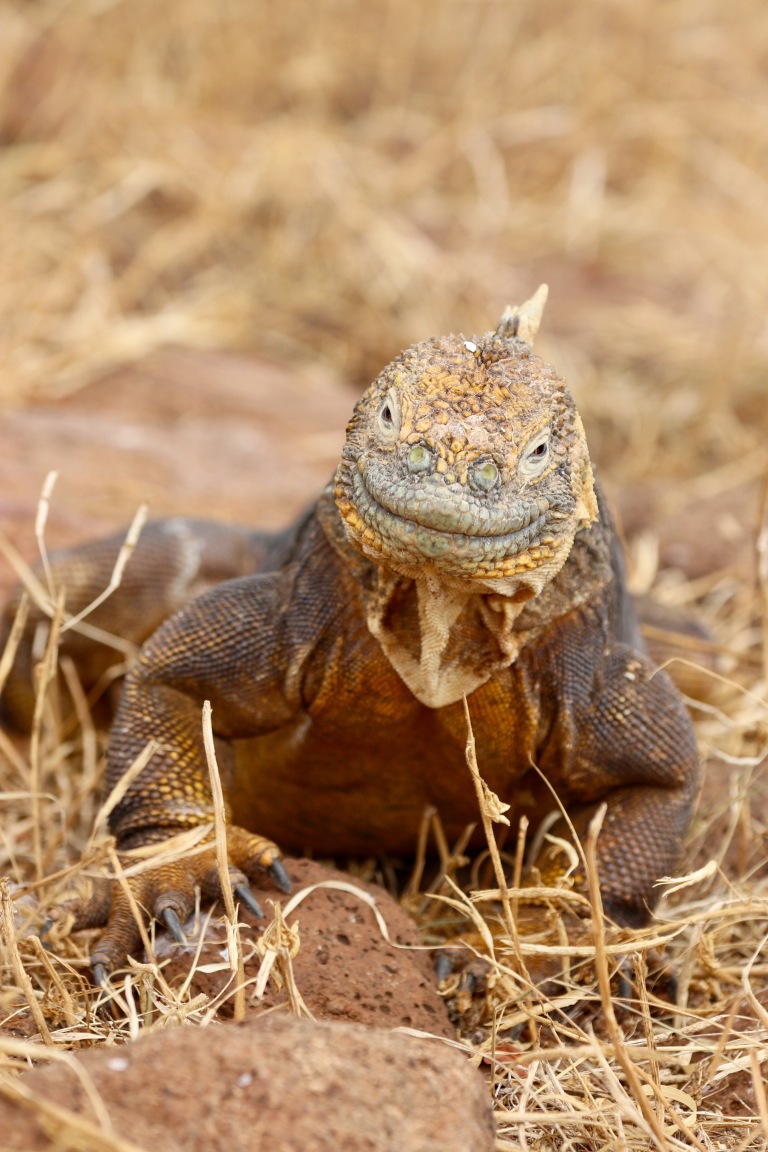 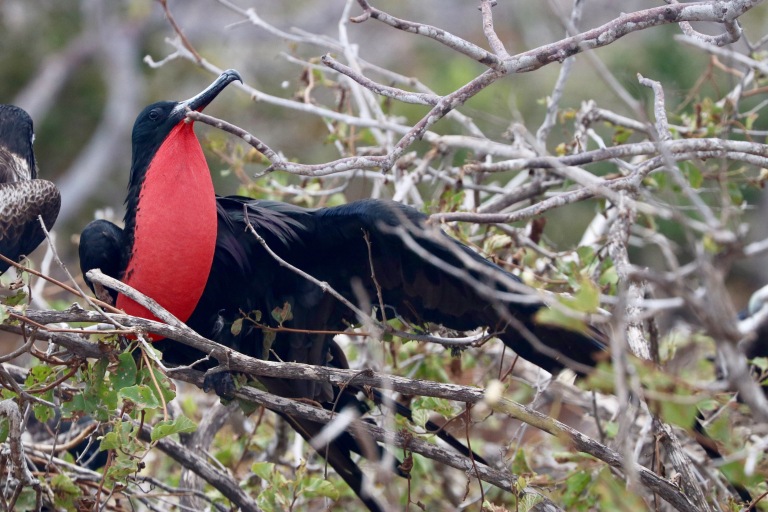 There were also land iguanas – orange and brown coloured, first time seeing these here. And lava lizards – much smaller and multicoloured, some with red heads (female), others with a black and brown pattern (male).
And of course, blue footed boobies. The coolest birds ever. This island is home to one of the largest colonies in the Galapagos.
The boobies here were great – some just standing around, one doing the mating dance – moving from foot to foot. Others sitting over eggs (one in the middle of the pathway). Some with a fluffy white baby boobie. And one with two brand new babies. Apparently each boobie will often lay two eggs. But only one of the babies tends to survive.
After walking through the palo santo forest, we ended up on a sandy beach – complete with sea lions.
Here, you could see the extend of the birds. Everywhere you looked there were birds. Flying. Nesting. Sitting. So many. 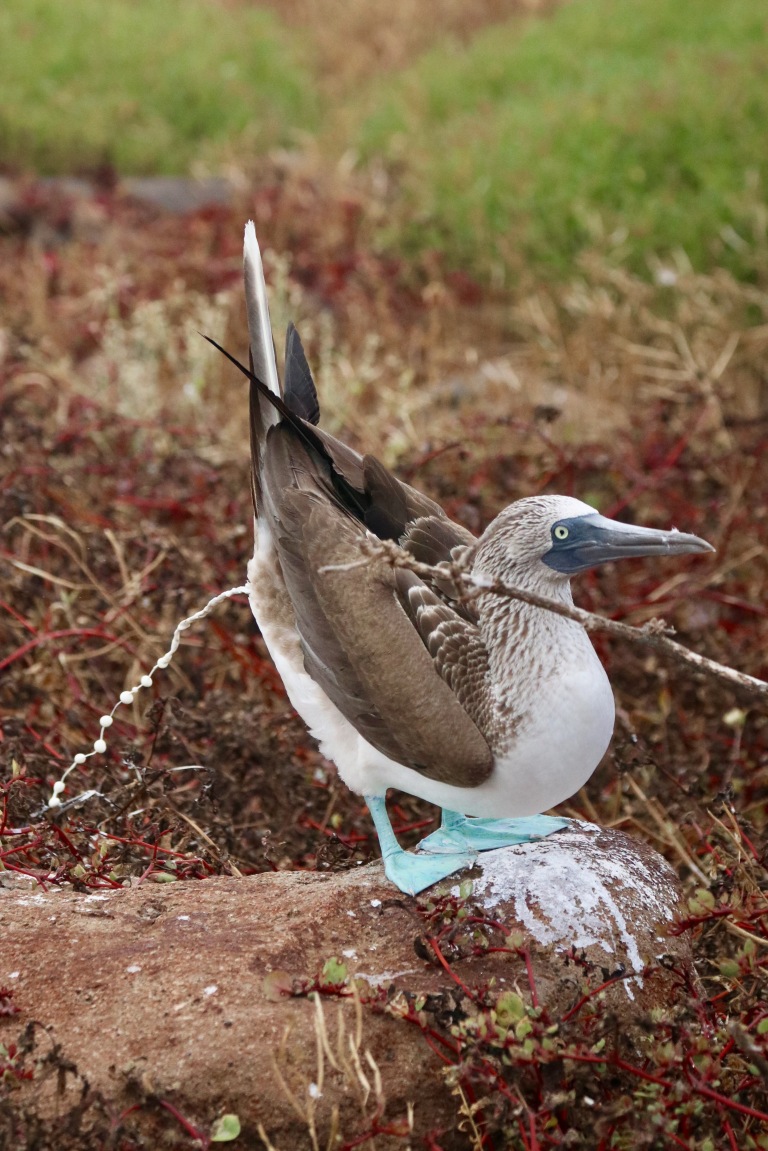 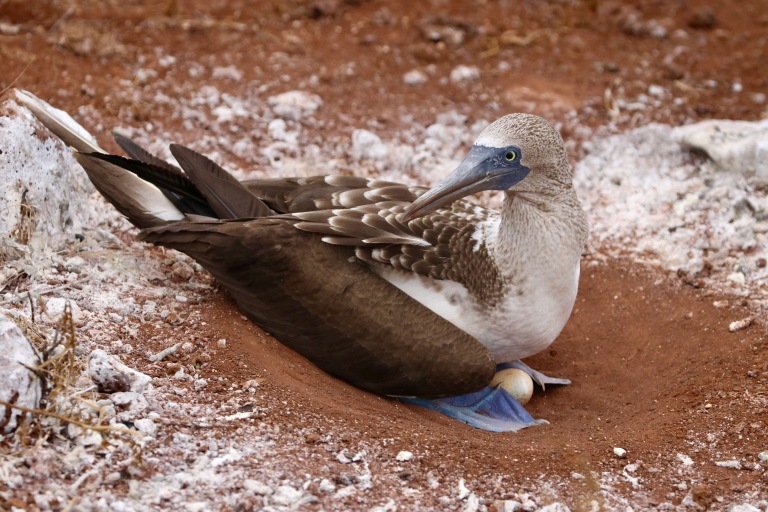 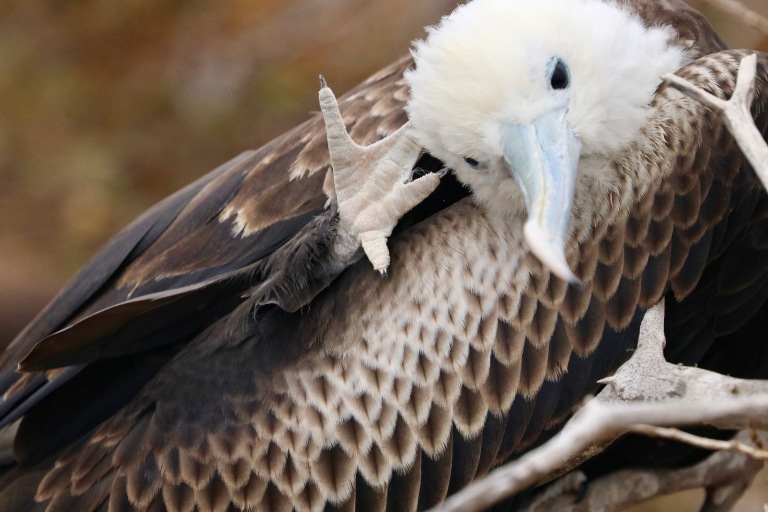 Around 3pm we were back on the boat to begin the 16 hour crossing to Wolf island, 100km north of the main archipelago.
Dinner was great – lentils, vegetables and fruit. Very happy.
After dinner we went out onto the roof to watch the stars – incredible. So many. Able to see northern and southern constellations, as we are basically on the equator. And could see the mist of the Milky Way. It’s not often that you get so far from light pollution that the sky is lit up like glitter.