I did want a lie in. But that conflicted with visiting the Acropolis with fewer crowds.

So up early it was.

Breakfast wasn’t very exciting. I had some bread with tahini and jam. No fruit (!). Then we headed out and got lost. I thought I knew where I was going. I didn’t. But we eventually found the entrance.

We arrived about 8.20am. The site had opened at 8am and there was no queue. Brilliant. I was worried we would be stuck in the long queues that I had read about. The entrance fee is rather steep at EUR20 per person.

We entered from the ‘side’ entrance, rather than the main entrance. This is the one nearest to the acropolis museum. And has all the sites to look at enroute to the top.

First up the Theatre of Dionysos. This is the worlds first theatre. And is located on the slope of the acropolis. The circular seating is still visible, as is carvings in the stones. 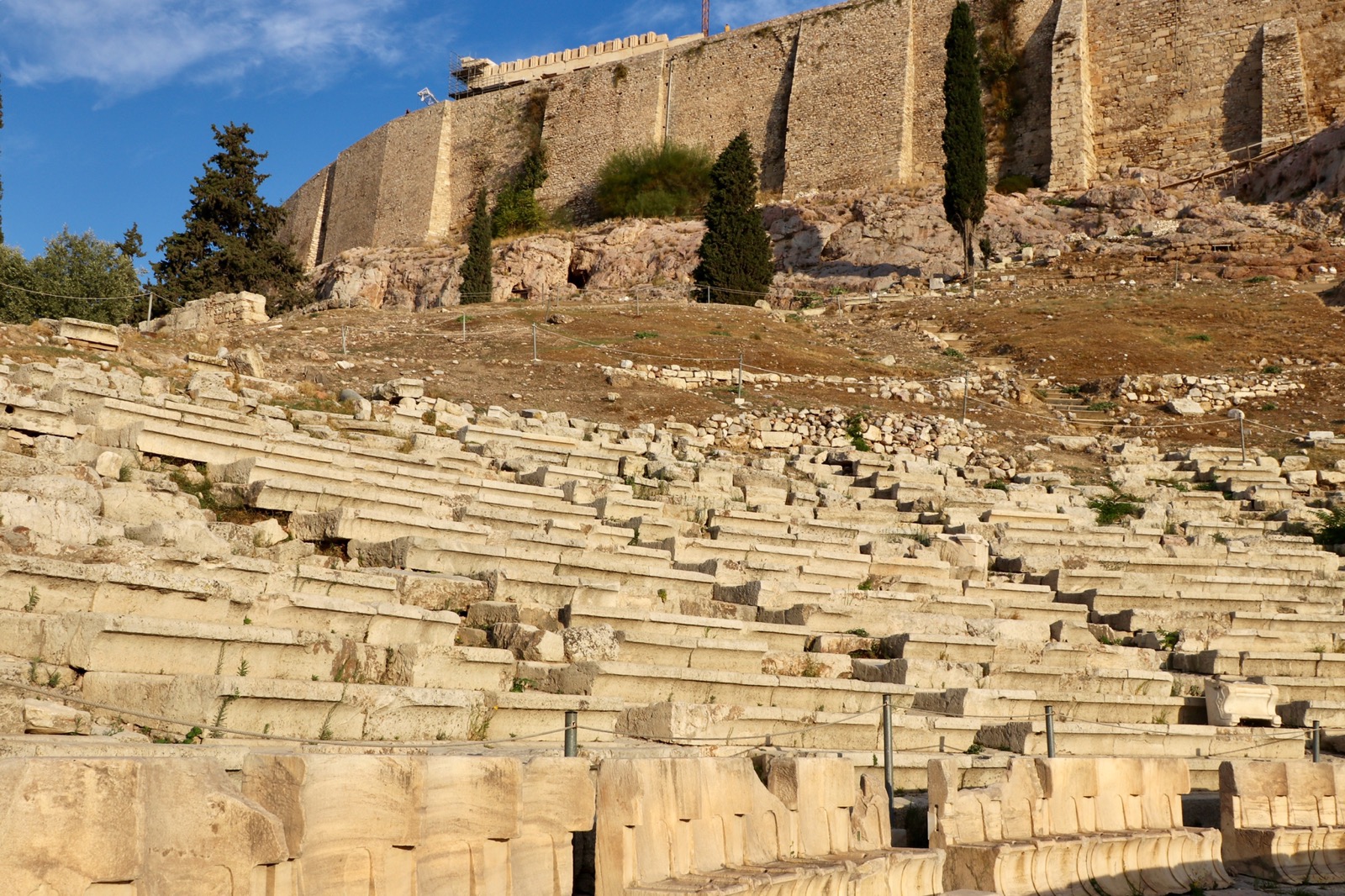 Then slowly winding uphill, past lots of bits of rock. Some had carvings. Others had writing. All rather cool.

Then to the Odeon of Herodes Atticus. This theatre had much steeper seating and a tall wall filled with arches. This was built in AD161 and still hosts performances during the Athens festival each year.

A little bit more winding uphill and we were at the main entrance to the Acropolis – the Beule Gate. A marble staircase leading up to tall columns surrounding the pathway leading through the middle. All rather grand. And just to the side, a small temple, the Temple of Athena Nike, which was glowing orange in the early morning sun. 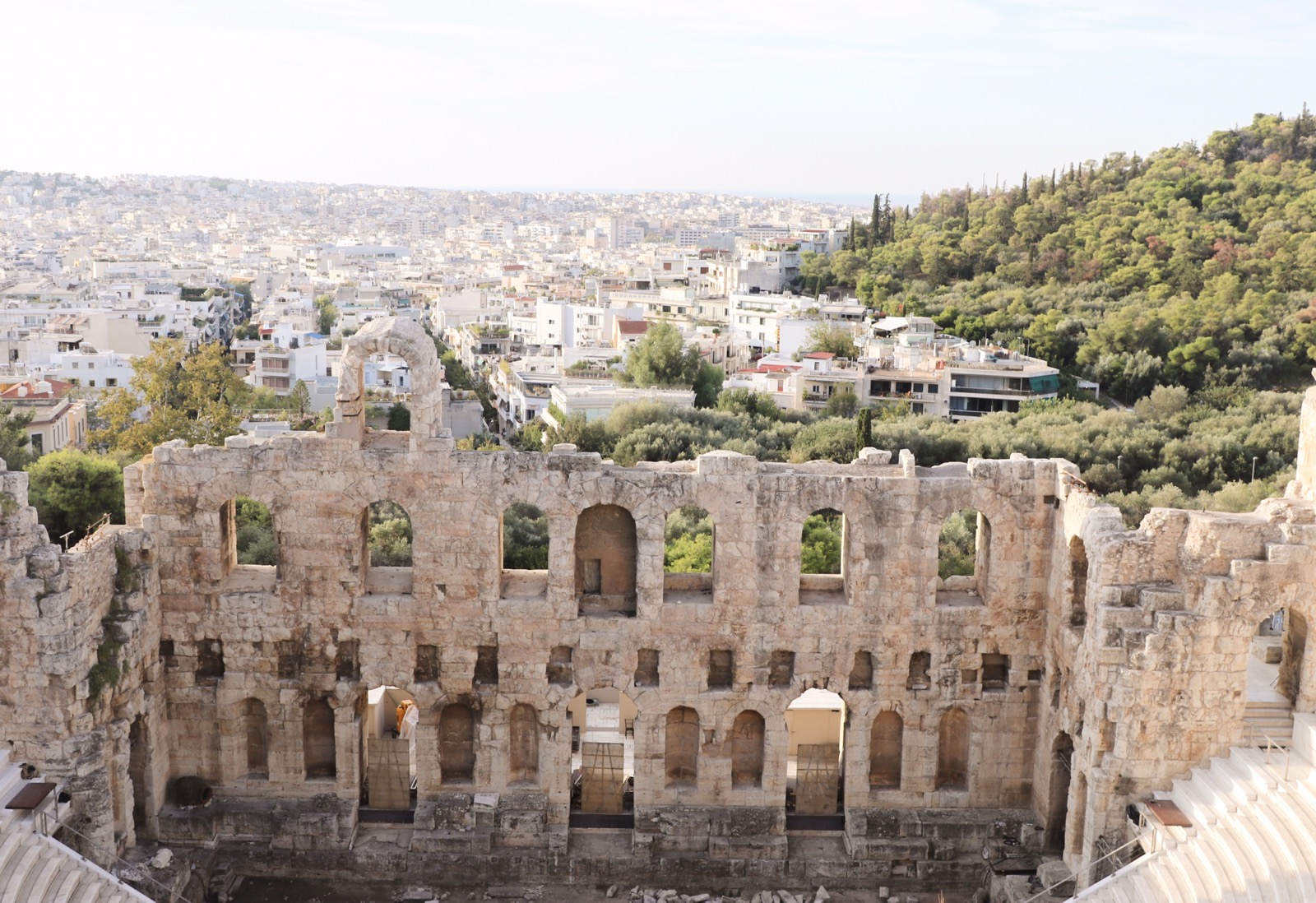 As we had arrived early, the grounds were quiet. There were no people on the pathway in front of us leading up to the impressive, imposing Parthenon building. 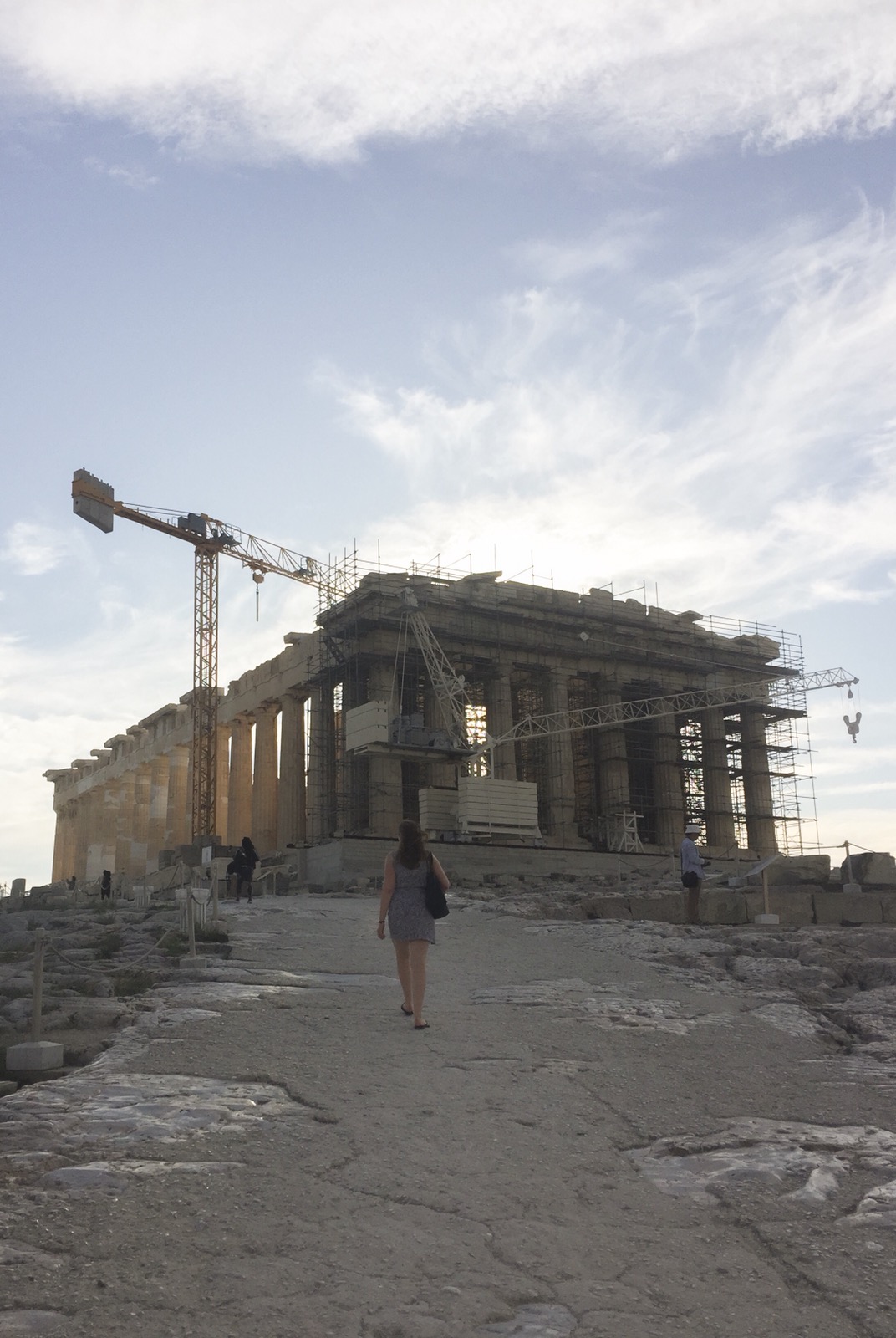 The Parthenon is made entirely from Pentelic marble. It took 15 years to build and was completed in 438 BC. It was built to be a treasury and house a statue of Athena. The western face was being repaired, so was covered in scaffolding and cranes. However the eastern face offered a full view of columns. And the top roof part, still with a stone horse carving visible in the corner.

A smaller temple lies to the side of the Parthenon, the Erechtheion. Made up of lots of different parts. A few columns. And some statues of women – Caryatids – acting as columns holding up the side of the temple. I thought we were looking at originals. But apparently not. Those are in the museum and these were just plaster casts.

I loved all of the bits of rocks. It was really cool.

The views from the edge were awesome. All across the white washed city. Dotted with grassy hills. The ocean on one side. And mountains on the other. 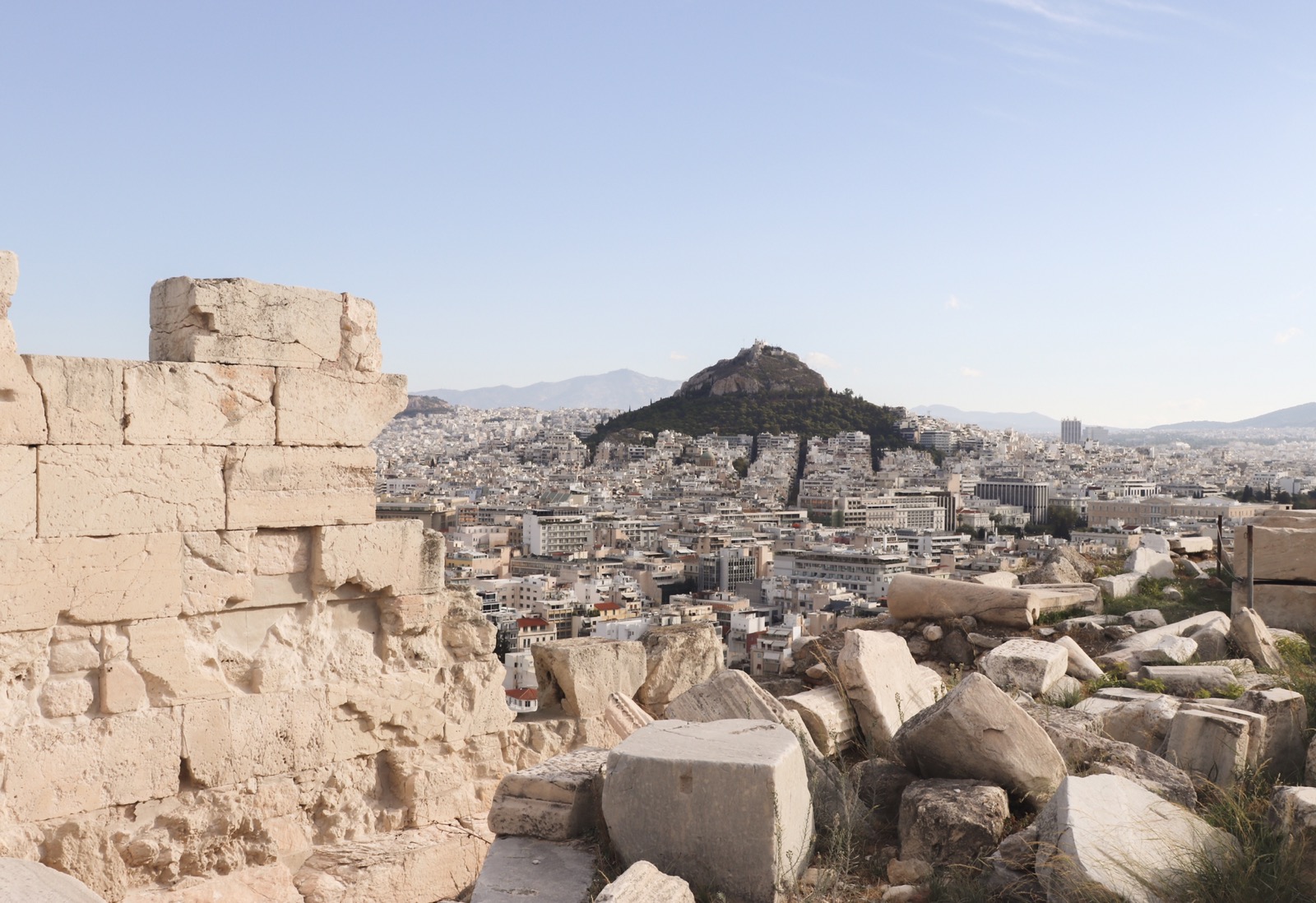 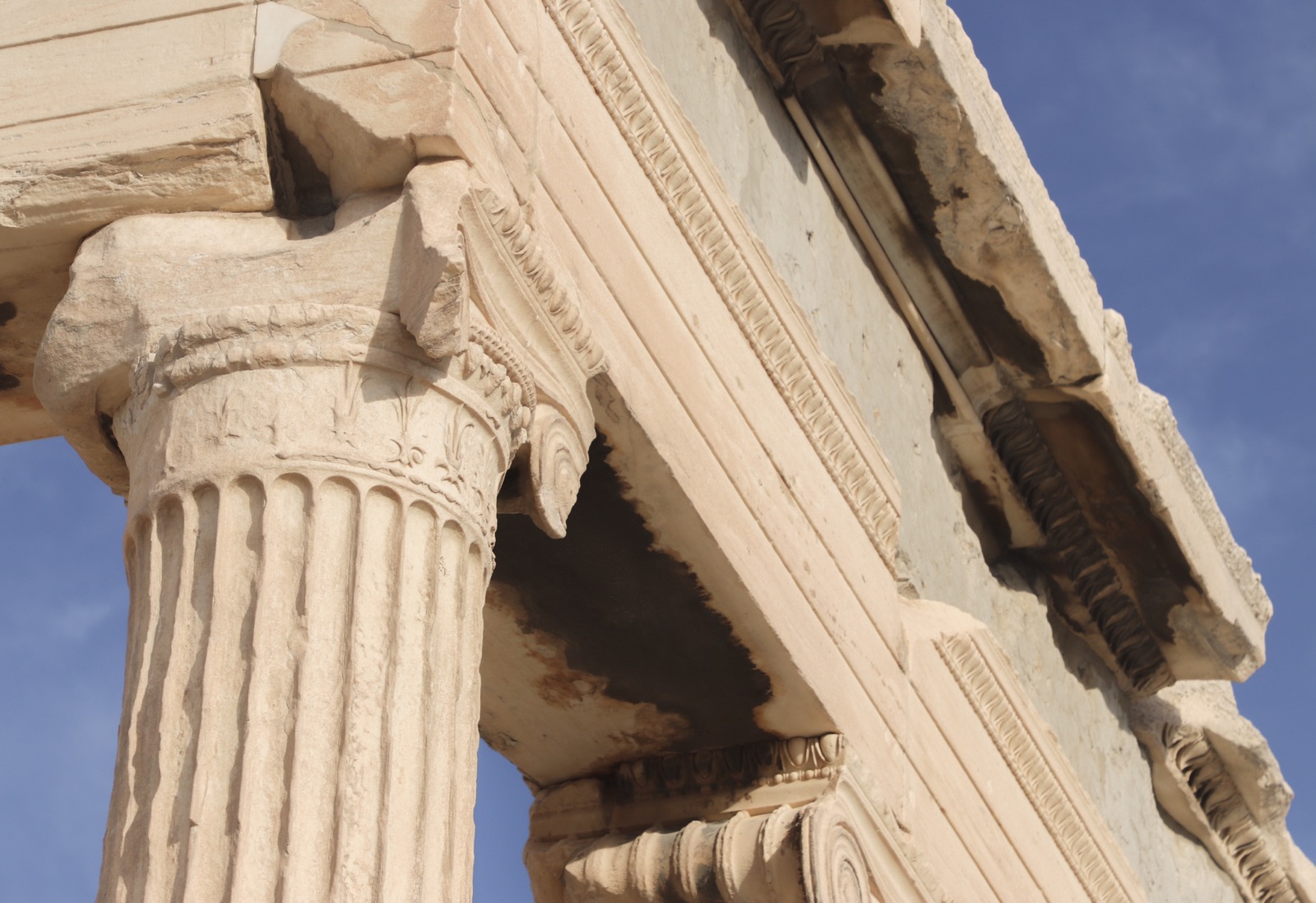 By 9.30am we were done. We had wandered all around. Sat down and admired. And taken far too many photos.

It was also now that the crowds were arriving in their hundreds. Huge tour groups. It was completely crowded. Couldn’t see for people. More and more entering. I’m so glad we came early.

On our way back down, we went down a different route and were passed by hundreds more heading up. We were definitely headed in the right direction!

We popped to look at the view from Areopagus Hill. A large stone rock at the western base of the acropolis. Here there were views leading down to the Agora beneath. But didn’t compare to the views from the top of the acropolis.

To get a nice view of the side of the acropolis, we headed to the nearby park – Filopappou Hill. Here there is a hill which you can walk up to get ‘the view’.

It was a nice, cool walk through the pine forest. We weren’t quite sure which way, but just kept going upwards, hoping for the best. And it didn’t take long before we made it to a monument at the top of the hill. The views were awesome. All across the acropolis and the surrounding city. It looked surprisingly far away, particularly as it hadn’t taken that long to walk there.

We sat up the top for a while, before winding our way back down the hill, along the streets to the south of the acropolis and past the preserved ruins sitting beneath the museum.

We popped to a few other sites – Temple of Zeus. We didn’t pay to go inside, just viewed from the metal fencing. Plenty good enough! This is the largest temple in Greece, the columns are 17m high. Construction began in the 6th century BC and was completed by Hadrian in AD 131 – taking more than 700 years in total to build.

And then Hadrian’s arch, which is thought to commemorate the completion of the Temple of Olympian Zeus.

And then lunch time. We were waiting for 12pm for a vegan cafe in a nearby neighbourhood to open. Away from the touristy area, it was deserted. And had delicious falafel wraps!

Then carried on. Back through Plaka, in a similar direction that we had walked last night. Through winding streets. Getting lost.

But you can’t get too lost. All roads lead around the bottom edge of the acropolis.

We bumped into the Roman Agora. Another set of stone column ruins. These ones were financed by Julius Caesar and constructed some time during the 1st century AD. After walking around the edge of these, we were in the busy Monastiraki area. Jam packed full of restaurants. And the flea market. Selling all kinds of random things – books, crockery, tables, chairs, shoes and trinkets. Mostly old, ranging from broken and dust covered to new. It was so busy we could barely move in places.

We popped to see Hadrian’s library. Another case of looking through the surrounding metal gates (you really can see everything, so not quite sure why you would need to pay EUR6 to stand a few meters closer). 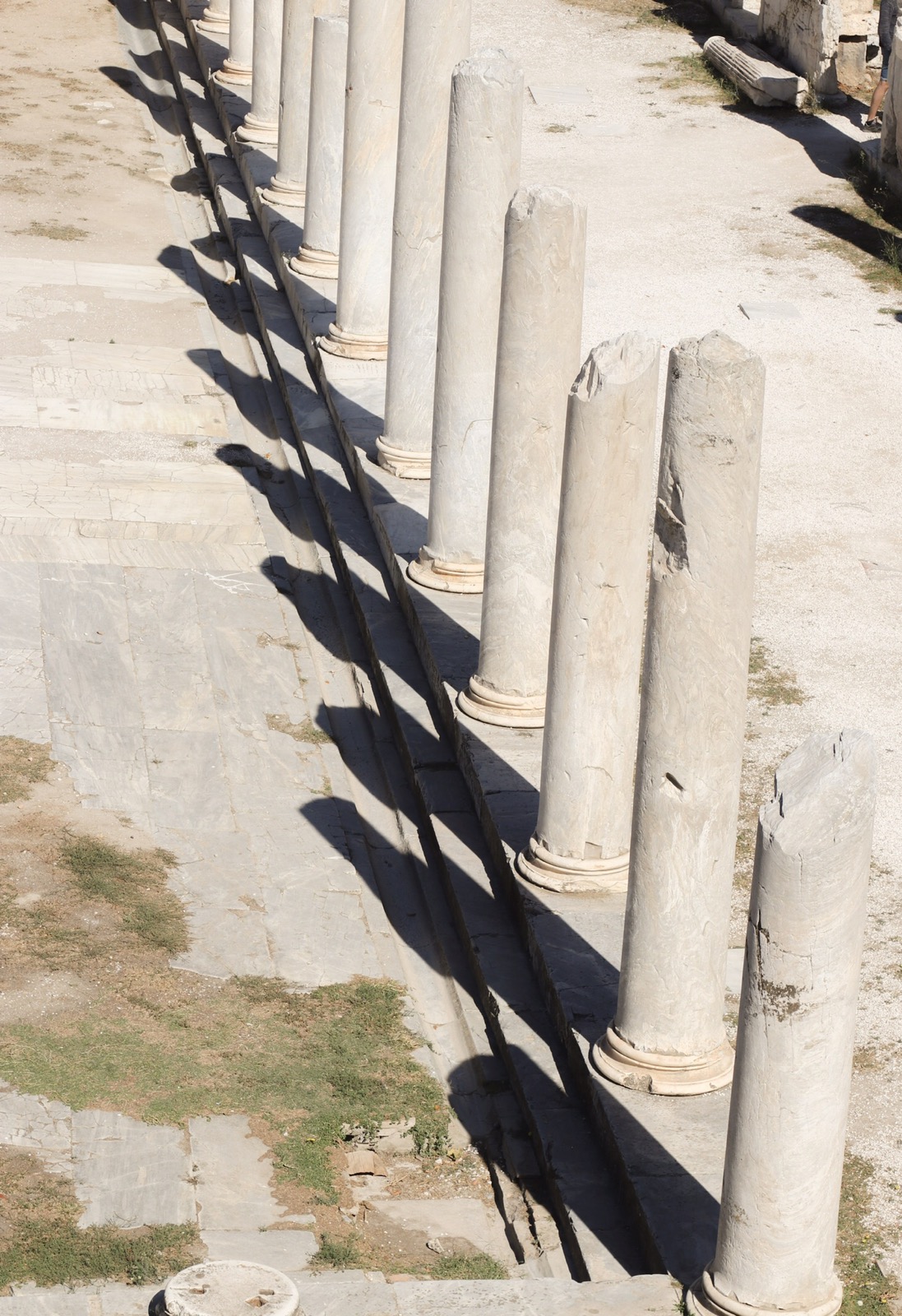 Then we started to head back towards our hotel. With a few stops along the way, of course.

First being for snacks. I wasn’t particularly hungry, but as we were passing. Vegan Greek donuts! Lukumades. They even stated vegan on the menu. They are small fried balls of dough. You can choose from a variety of toppings, we got dark chocolate and icing sugar. So delicious. 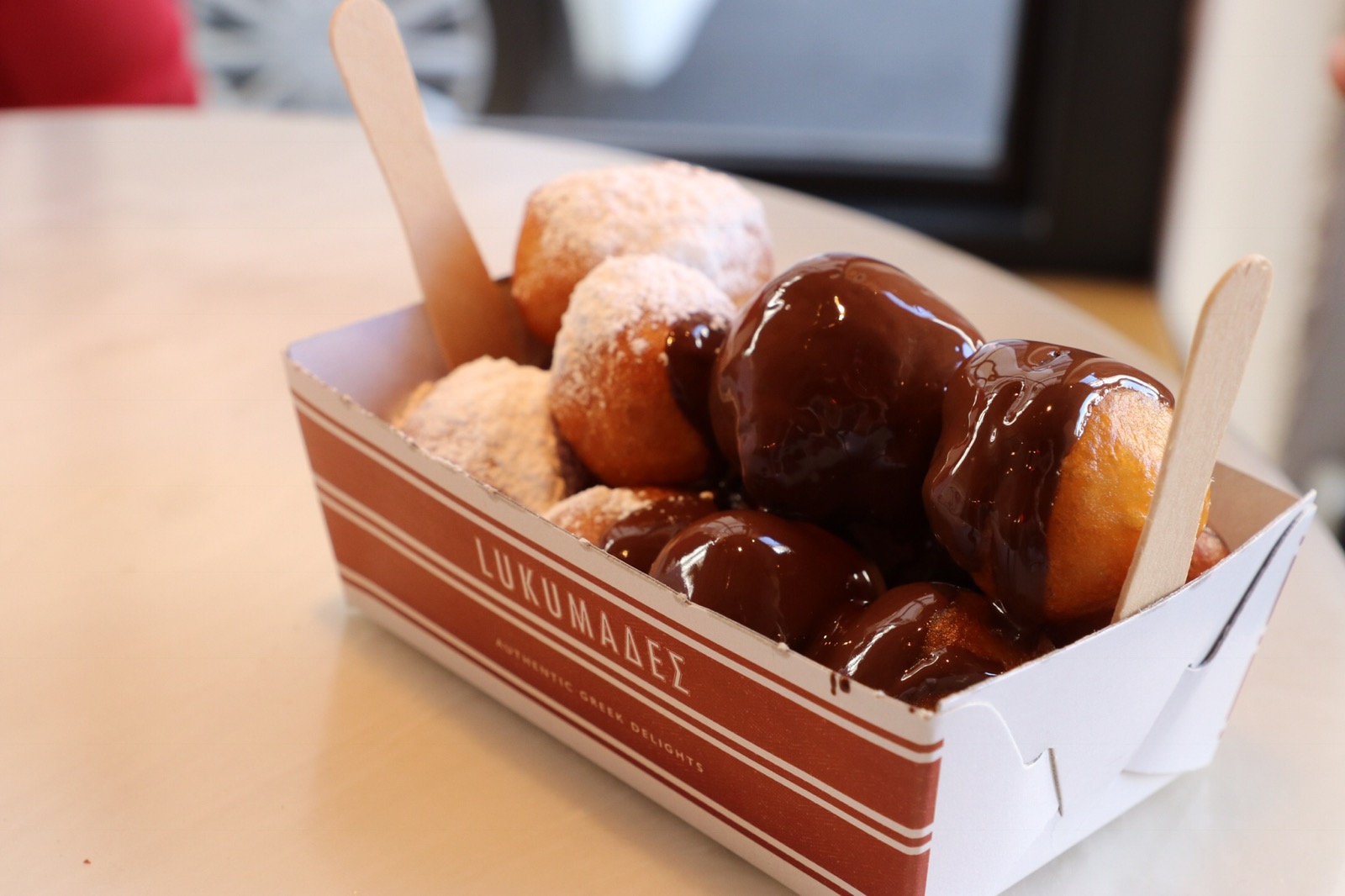 A bit more wandering later and we were at Syntagma Square. This is where we had arrived by metro on the first day, but had not been back in daylight. The square isn’t hugely exciting. A fountain, lots of benches, people selling random things – balloons, fidget spinners and bracelets. But surrounded by fancy buildings. One being the parliament building.

On one edge of the parliament building is a tomb of an unknown soldier. And is guarded by the local guards. In their traditional uniforms. A cream shirt with billowing sleeves. Cream coloured tights. And pointy shoes with large Pom poms.

Whilst we were there, the crowds were gathering. I had read that the changing of the guard only occurred at 11am. It was now nearly 3pm. I didn’t think they did anything else during the day. But I was wrong. We were organised into an orderly line, to watch as more guards came marching along, to swap over.

It was quite an elaborate affair. They could have simply walked up and swapped over. But no.

It was almost like a dance. They swing their legs up high, flick the lower part of their legs from the knee and tap out noises from the steel studs in the sole of their Pom-Pom shoes. It lasted a good 15 minutes and they probably walked about 10 paces. Quite unusual! 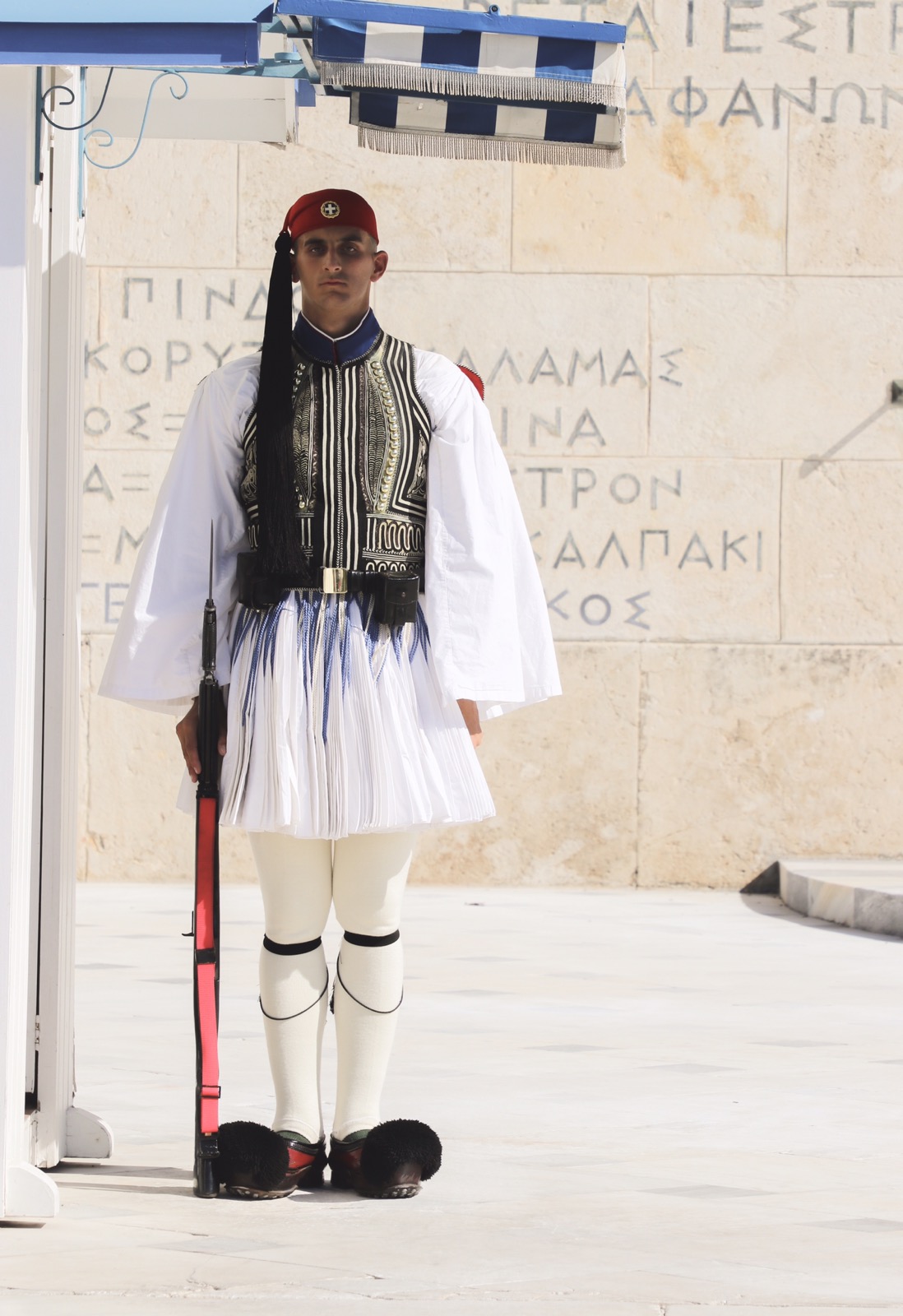 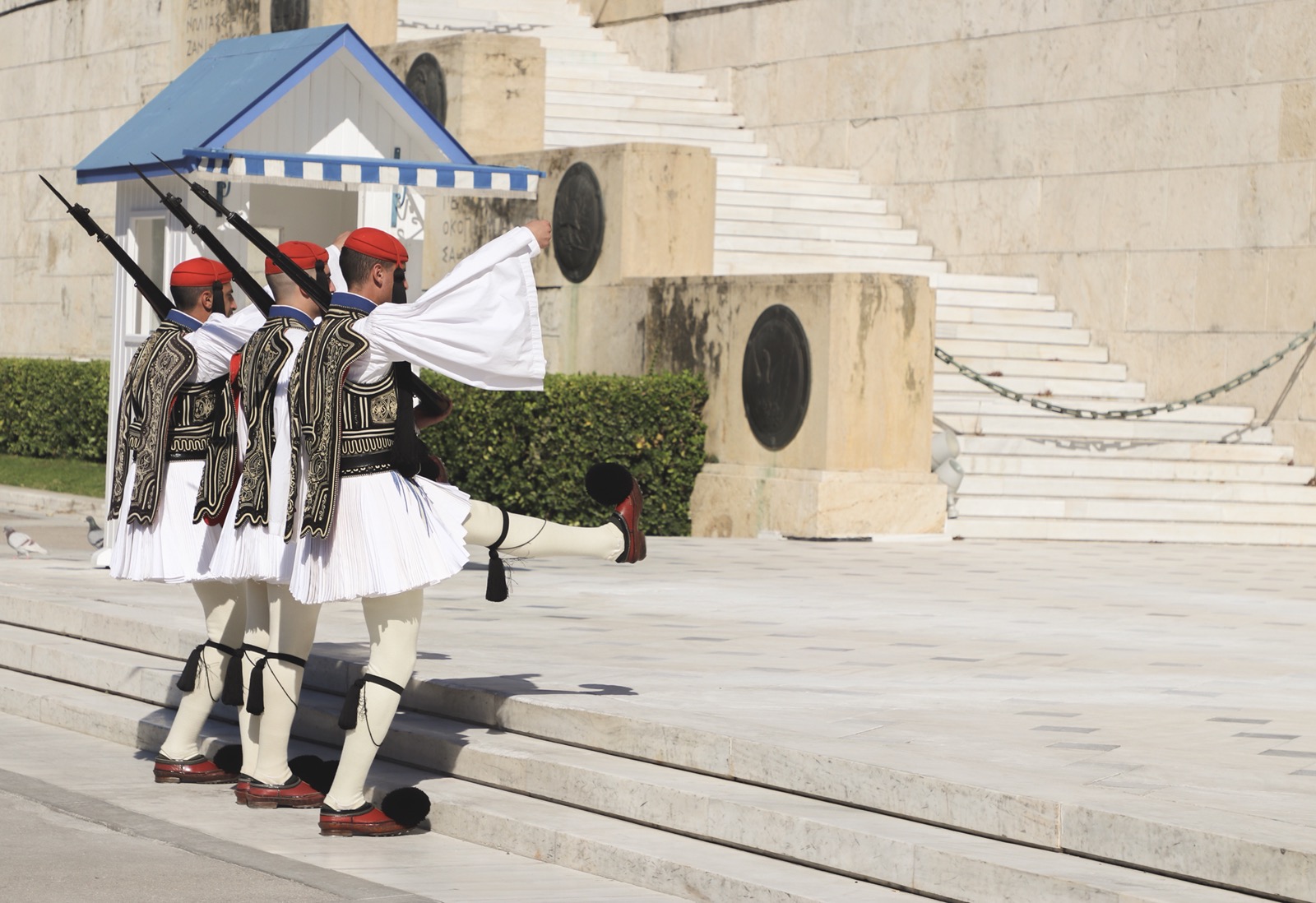 By now we were pretty tired and went for a sit down back in the hotel for just over an hour.

Rather than risk not being able to eat at the airport, we popped to a nearby vegan restaurant to get some takeaway dinner. I got a vegan burger (easy to transport and not too messy!).

And then back to the metro, to head home.

All very easy. An expensive ticket (EUR10 per person), a 40 minutes ride and you are there. Quick to pass through security and into an unexciting shopping area. Glad I had brought my vegan burger! 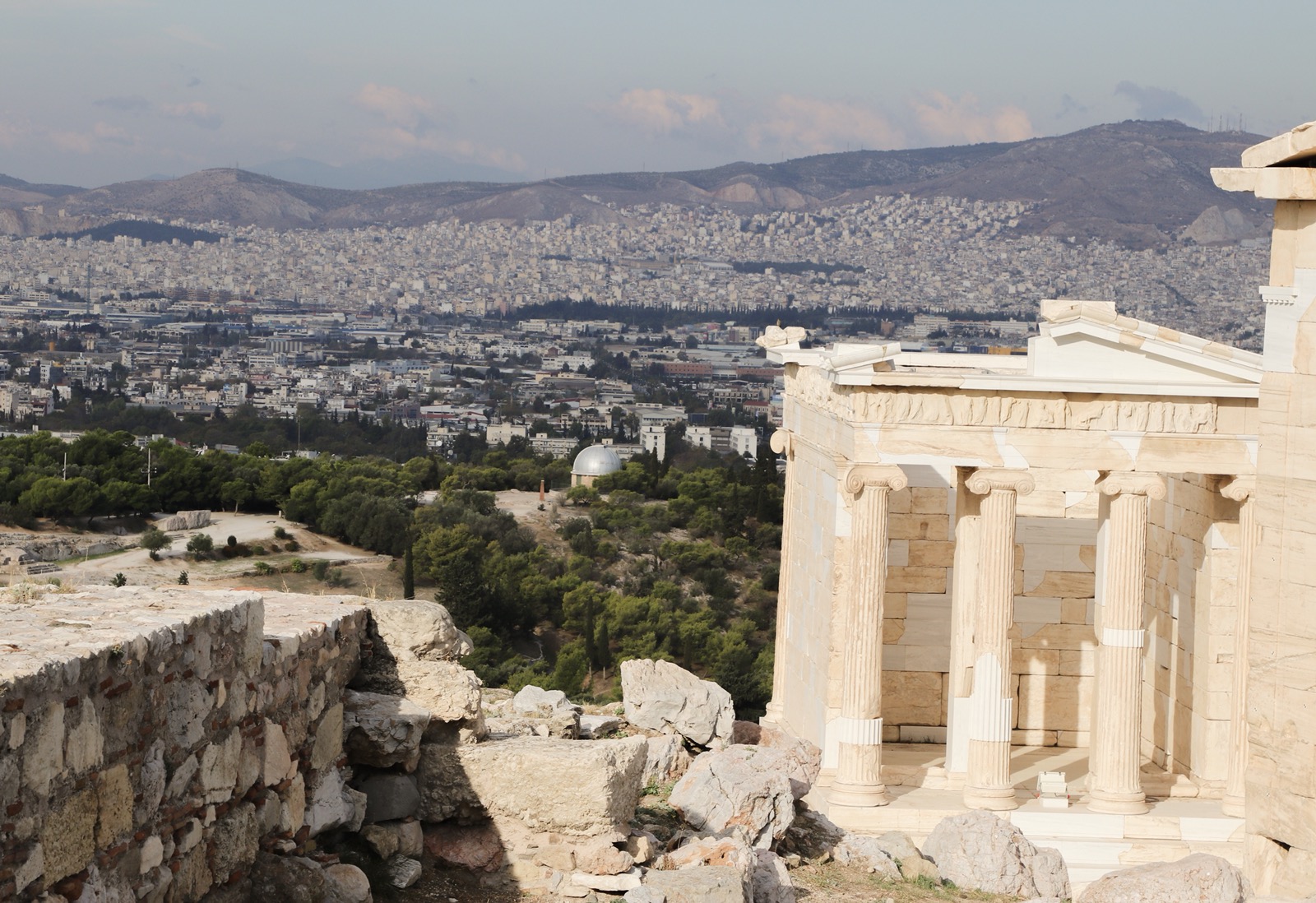 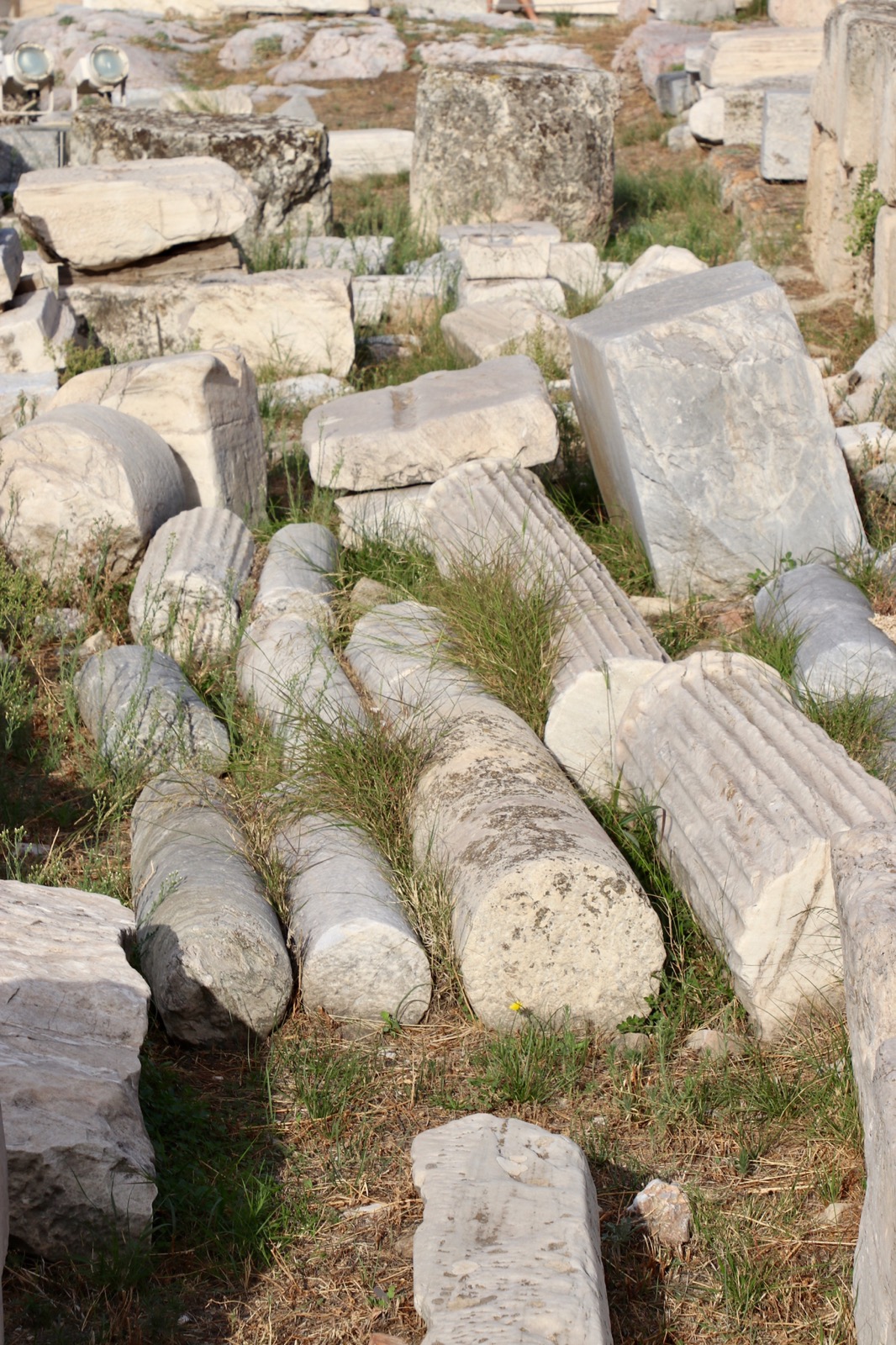 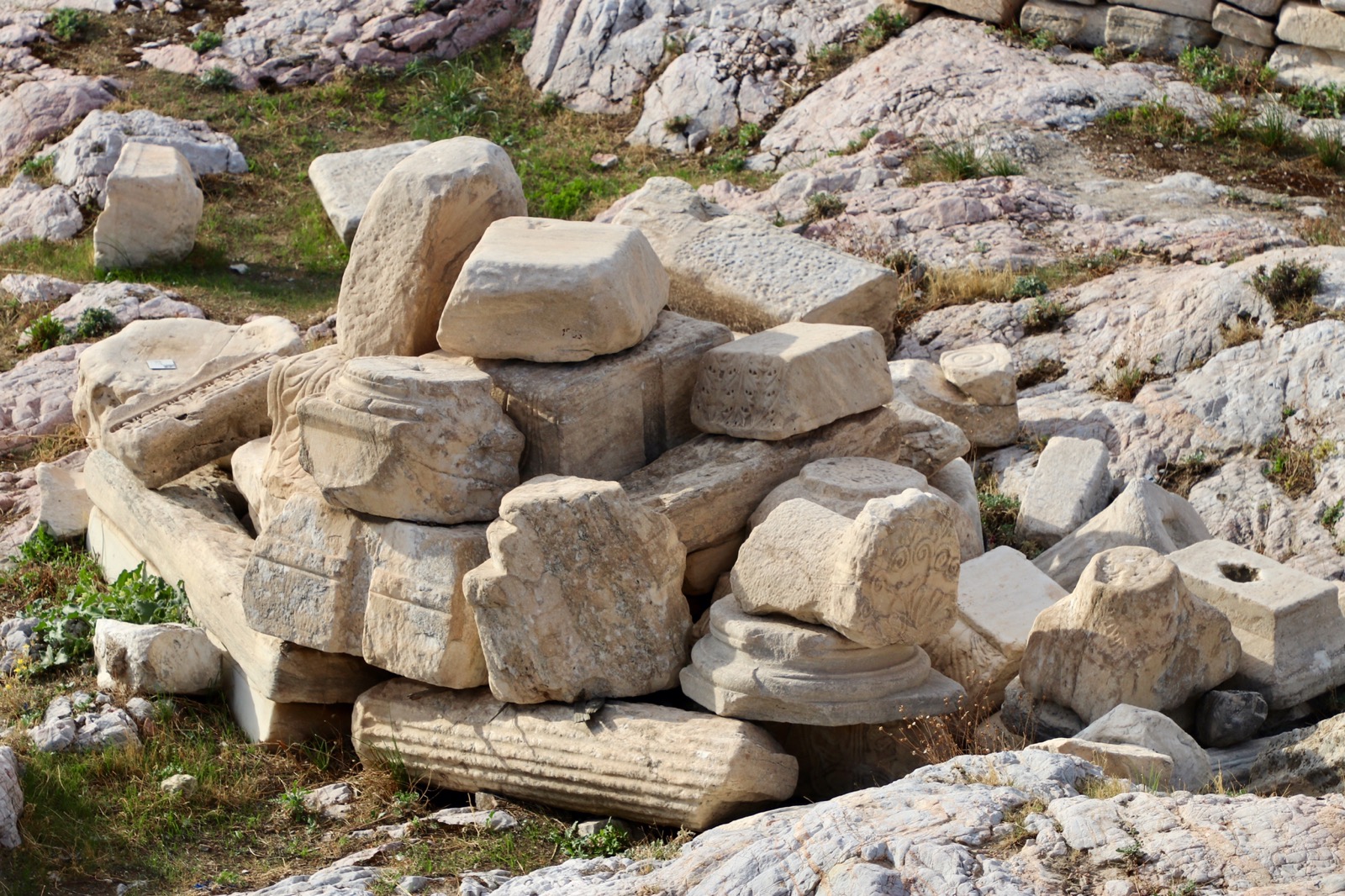 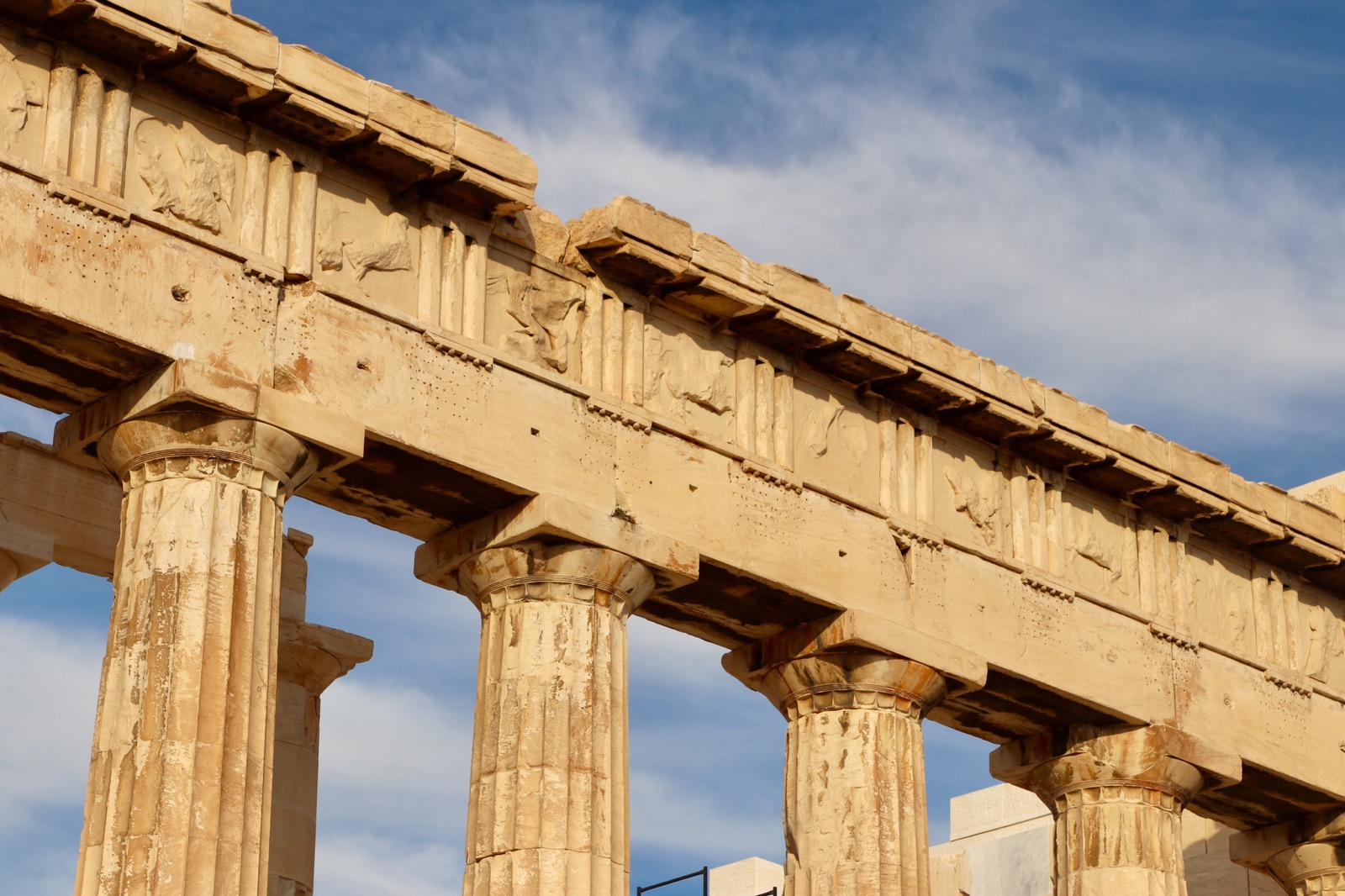 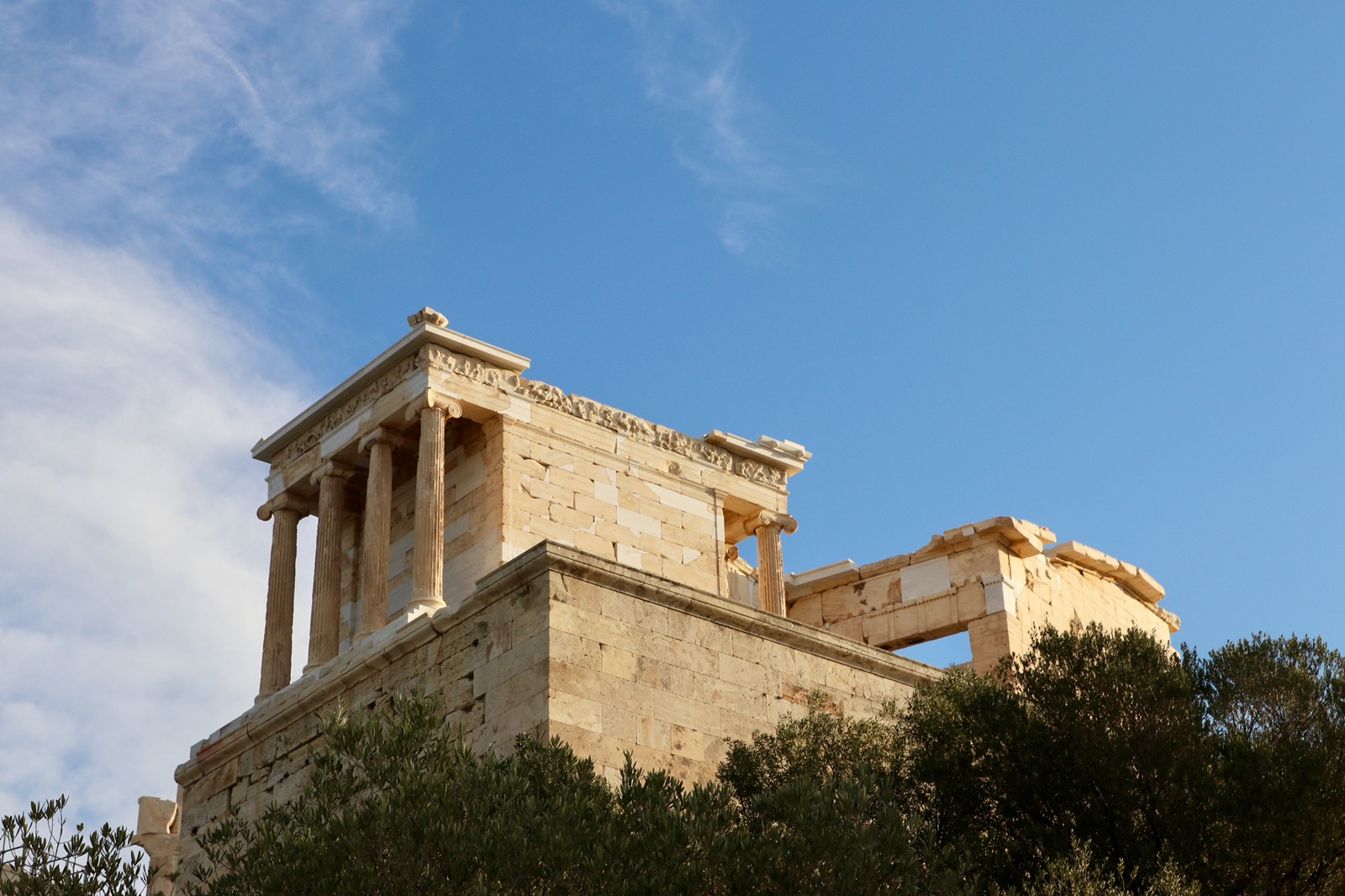