I was so cold all night. Again I felt like I didn’t sleep. In theory we were leaving later today. But everyone was still up at 6am.

The final time putting the tent away. And packing up the Lando. 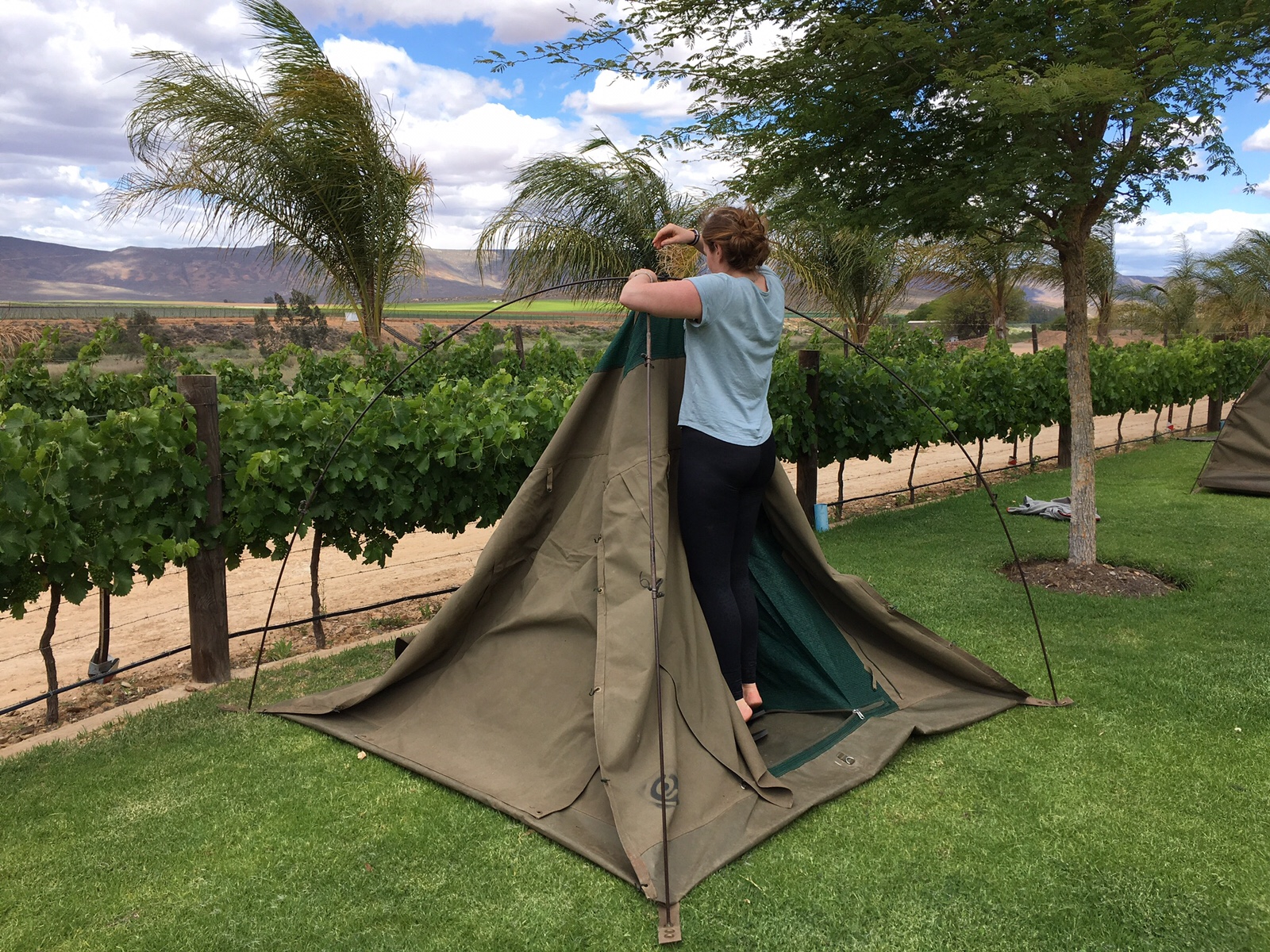 More maize porridge for breakfast, with jam and granola and then we should have been away for our final drive.

We left late. Bit annoying, as we will now arrive into Cape Town much later than planned. And I don’t have much time there.

The Lando is also falling apart. A door has broken. The mattress holders on the roof are broken, so enroute we were losing mattresses. So stopped to bring them all inside. A window clip is broken. It drives hundreds of kilometres everyday and has come from Nairobi. 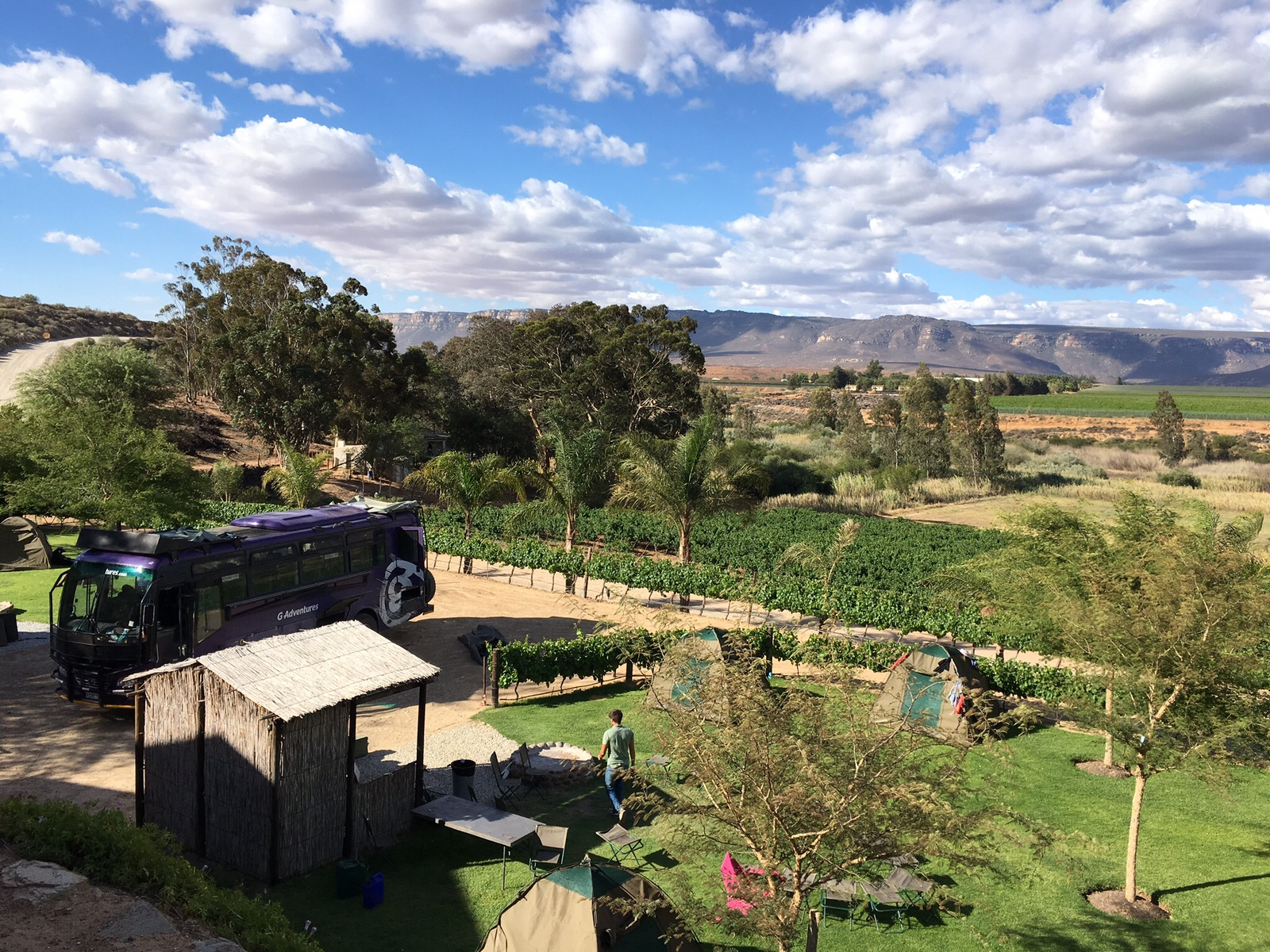 We were all just hoping that nothing else would break on our final drive in the Lando.

Gone are the dusty plains and rocky hills. Now, all green. Wine plantations all around. And rooibos tea plants. This is the only area that rooibos tea is grown.

We stopped at a petrol station and had to wait for someone to go to the police station. We waited 2 hours. Annoying. We didn’t leave until nearly 1pm. We were supposed to be in Cape Town by now.

We arrived into Cape Town at around 3pm. The end.

We are staying at a hostel. It was incredibly busy, with a bar out the front. I don’t stay at hostels anymore. I am too old for this.

By some kind of lucky mistake, I had ended up in a private room. So my friend joined me in it. Inside, it didn’t feel like a hostel. The room was quite pleasant, a brand new bathroom and an amazing view of table mountain.

We were so hungry. I had already decided on a place I wanted to go to for lunch. Lunch time was long gone.

It was only a few blocks away, and lunch was amazing. It was a completely vegan cafe. They had kombucha. And chocolate brownie. And I had a Mexican salad bowl. So delicious.

I’ve been to Cape Townbefore (https://glitteringocean.wordpress.com/2015/10/28/the-tablecloth/).But didn’t manageto get up the mountaindue to highwinds.They closethe cable car.It hasn’t been looking optimistic, we’ve checked the weather for the past few days. And it has been closed everyday. It is still closed today.

So change of plans.

We just went for a walk around the local area. Firstly the Cape Malay, Bo-Kaap area. Streets with colourful houses. These houses were originally a garrison for soldiers in the mid-18th century. However then was an area where freed slaves started to settle after emancipation in the 1830s. The houses are now historic monuments. They were pretty. But I did feel a bit silly walking around (with lots of other tourists around) looking at peoples houses. 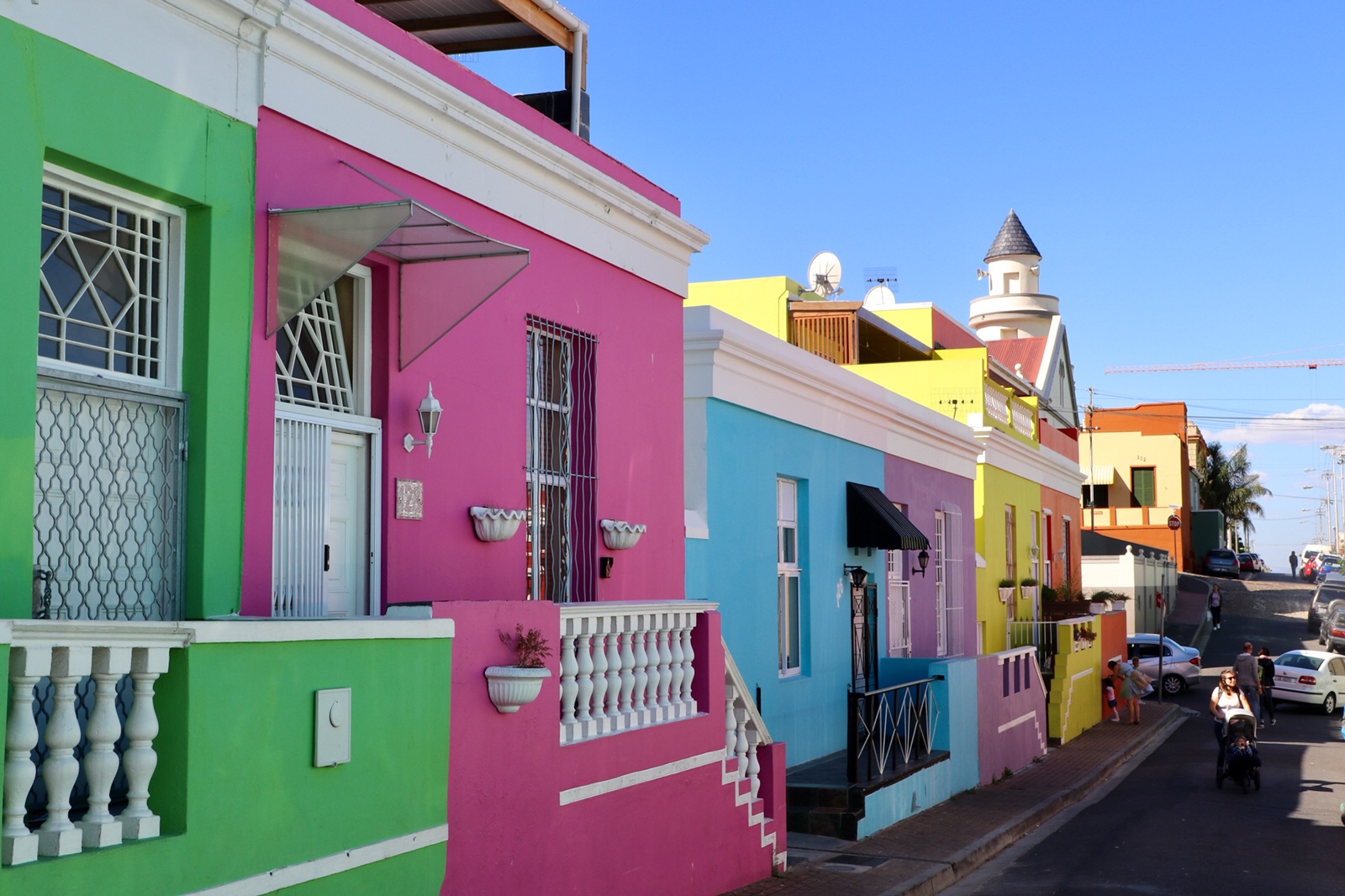 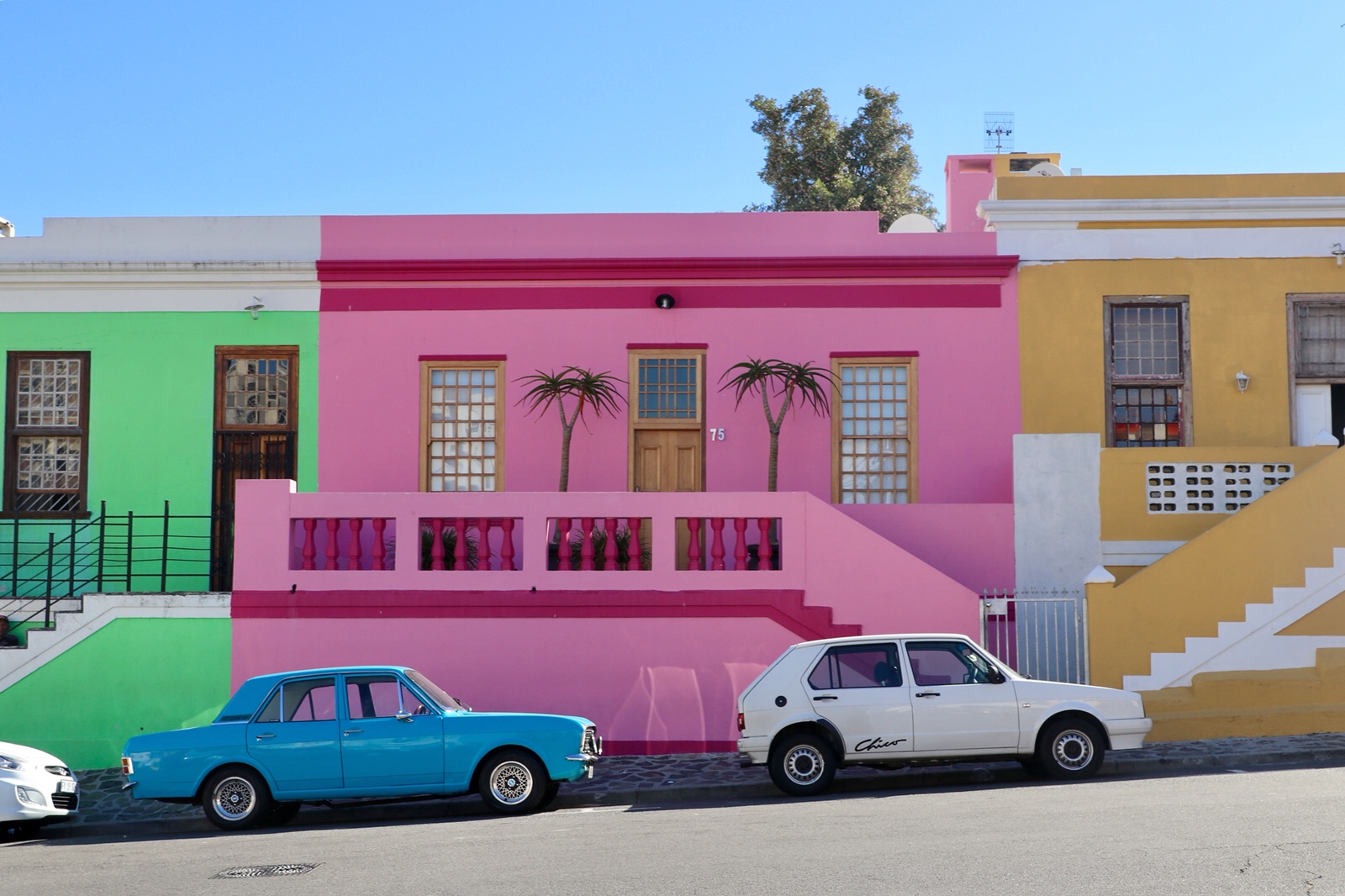 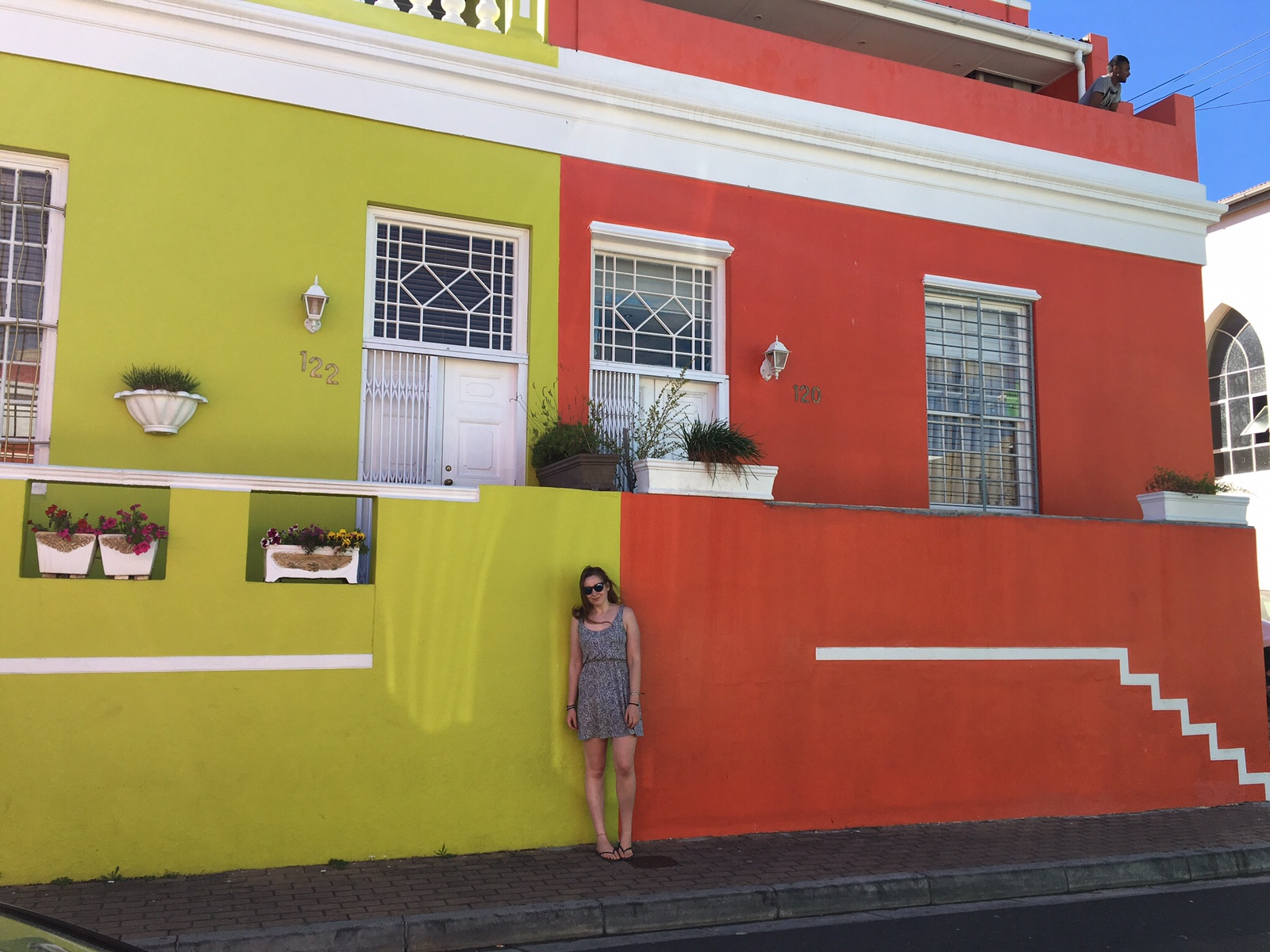 From here, we went back into main centre of the city and to a craft market on Greenmarket Square. They were all packing up, but it was still rather chaotic. Necklaces, wooden things, stone things, paintings, clothes. The usual African stuff. I didn’t buy anything, but it was fun to walk around, for a while, until the hassle got too much. 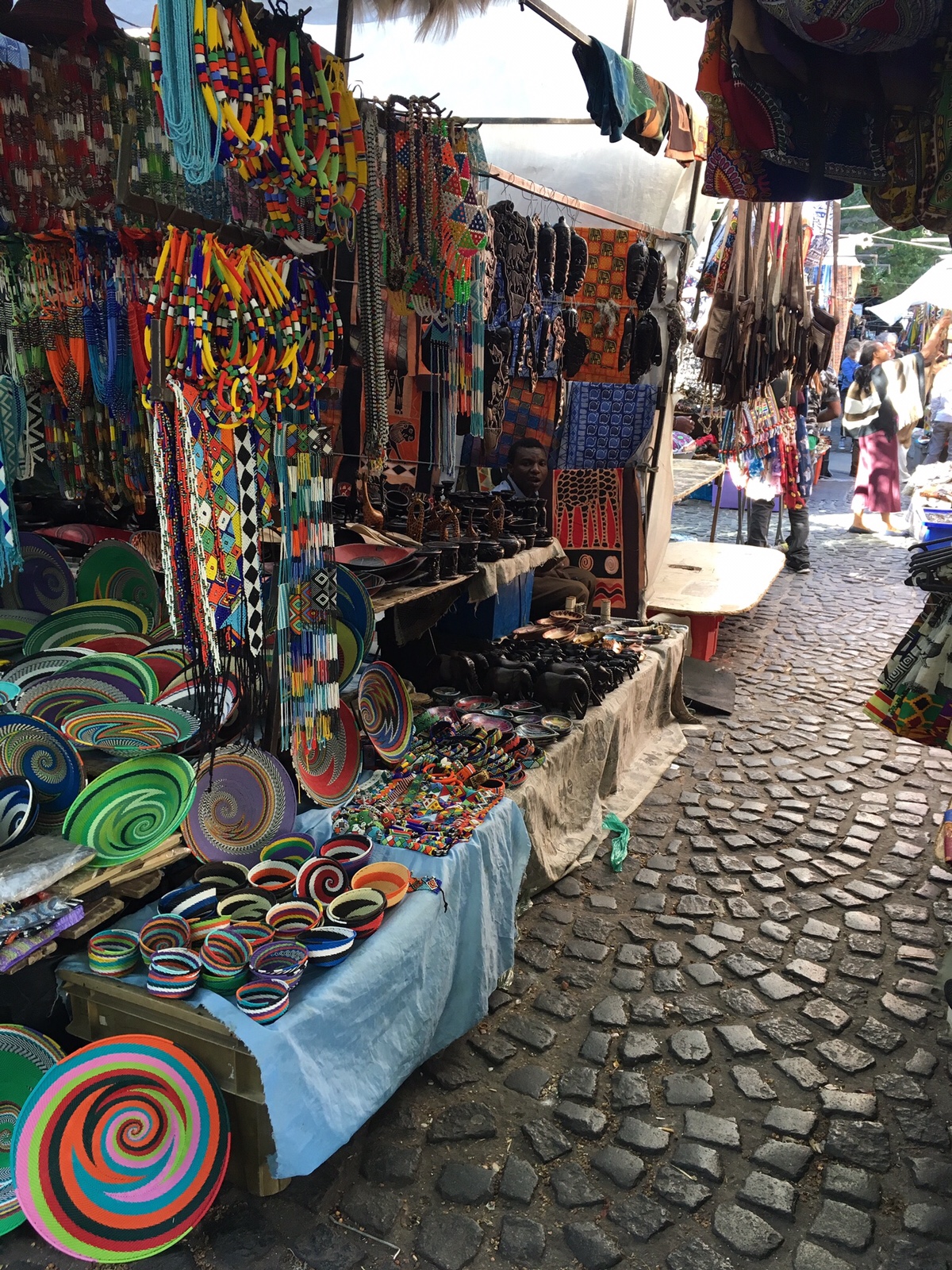 Then we headed back up long street. Full of bars, cafes and restaurants. We are staying at the top of long street, where it turns into Kloof street – and surrounded by hipster cafes. Which is great, as they mostly sell loads of vegan food. Including a gelato place, with lots of vegan flavours. I got a scoop of chocolate gelato on the walk back and it was amazing! 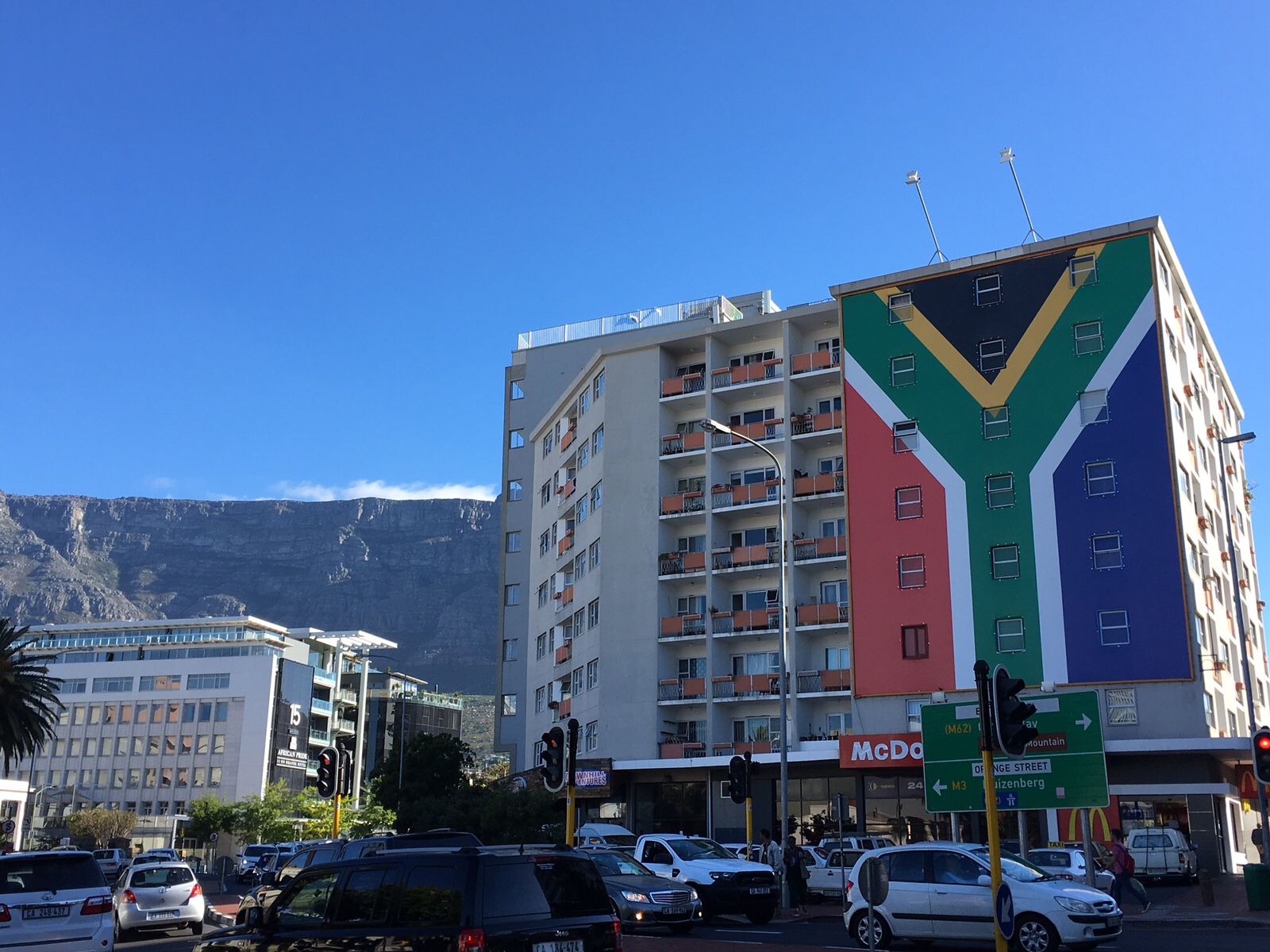 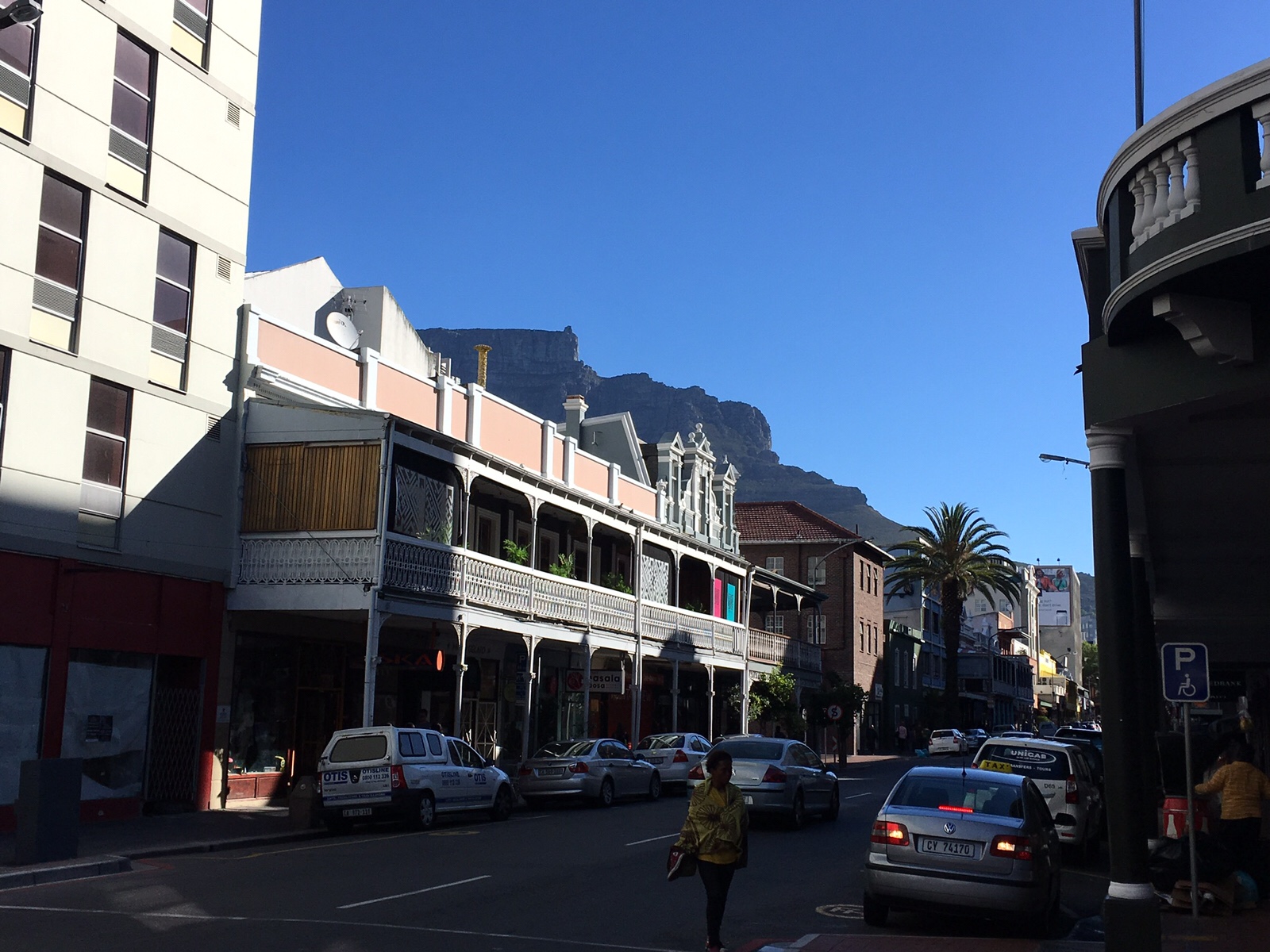 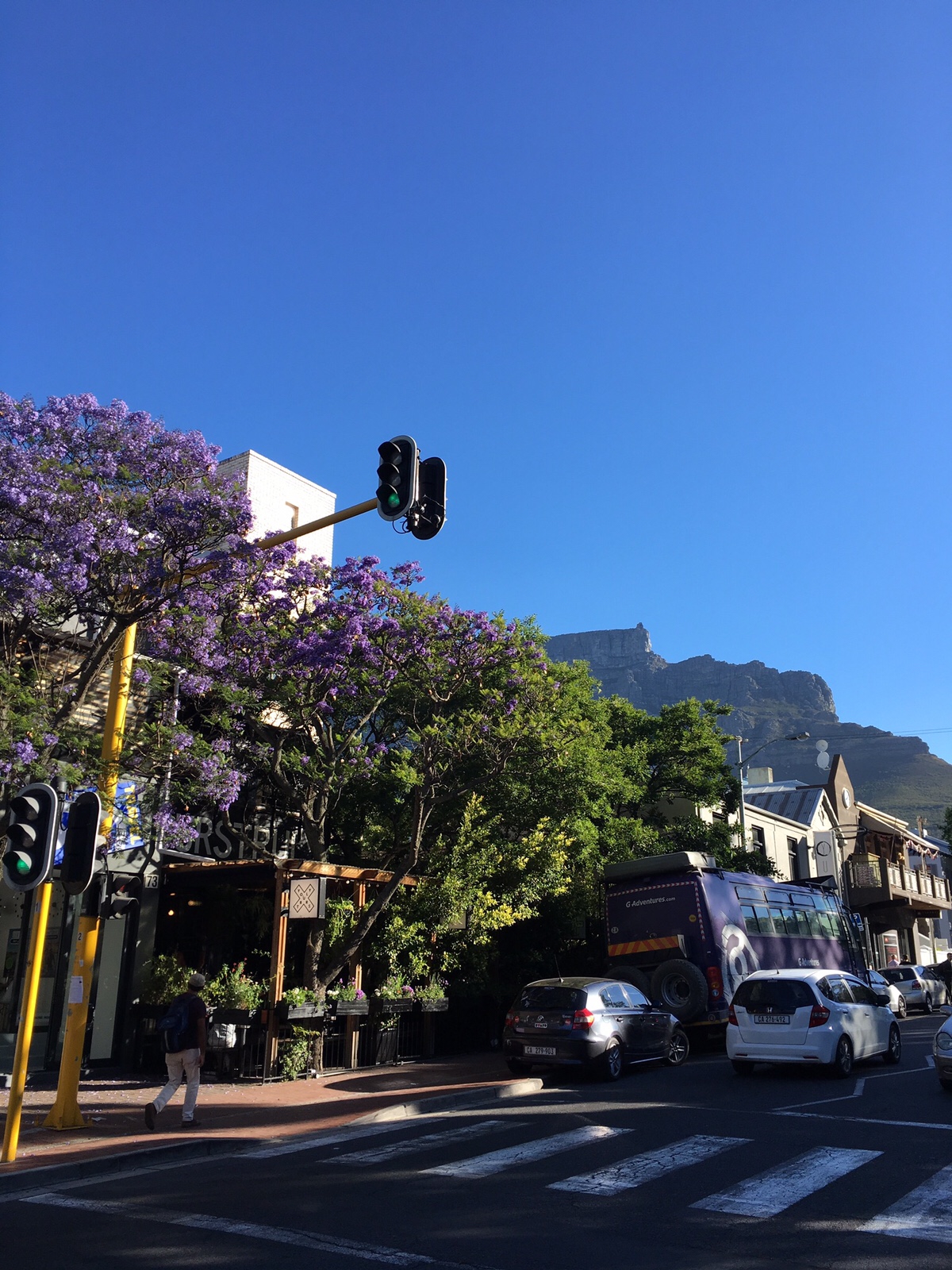 Even though last night was our last truck dinner, tonight is our last real dinner as a group. We went to a restaurant nearby. Despite getting there at 7pm, our food didn’t start to arrive until around 9pm. And they didn’t even end up having what I ordered. So I ended up with a plain soy burger, with chips. Not very exciting. But they took it off the bill.

It was around 10.30pm when we left. And lots of the group just disappeared, which was disappointing. After a few weeks of travelling together and most people didn’t say goodbye.

Like clockwork, I was awake before 6am. So nice to wake up warm and cosy, not freezing cold. But unable to sleep anymore. So we got up anyway.

Breakfast was included – I had some granola and mango juice. It was actually a nice cafe – very modern, sitting outside surrounded by plants. Then said goodbye to some of the group who were heading off on a day trip today.

We headed off early as well, just after 8am. In an uber, to our first stop. Kirstenbosh gardens.

It was an amazing sunny day. And we found out enroute that today the cable car was actually open. Typical, as we had already driven in the wrong direction. But currently there was a 45 minute wait. We were hoping that would decrease.

It took about 20 minutes to drive around the base of table mountain to the gardens. Going against the morning rush hour into the city.

These gardens are 36-hectares and are among the most beautiful in the world. That became obvious as we were walking around. Plants and flowers and lawn stretching out in front of an amazing view of table mountain. 9000 of Southern Africa’s 22,000 plant species are grown here. South Africa’s National flower – the protea were in bloom in lots of colours – reds, orange and yellow. Everywhere was so pretty. 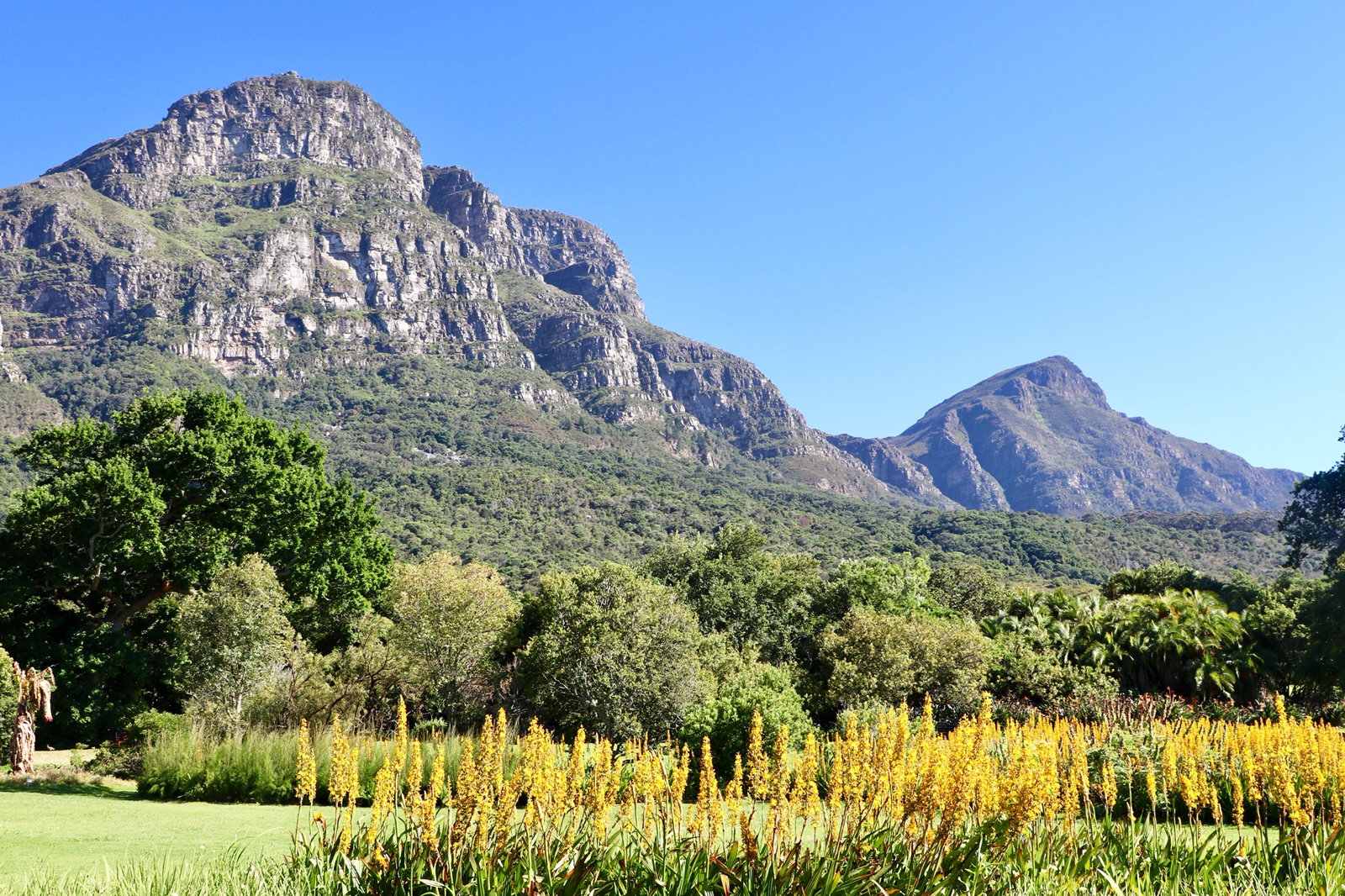 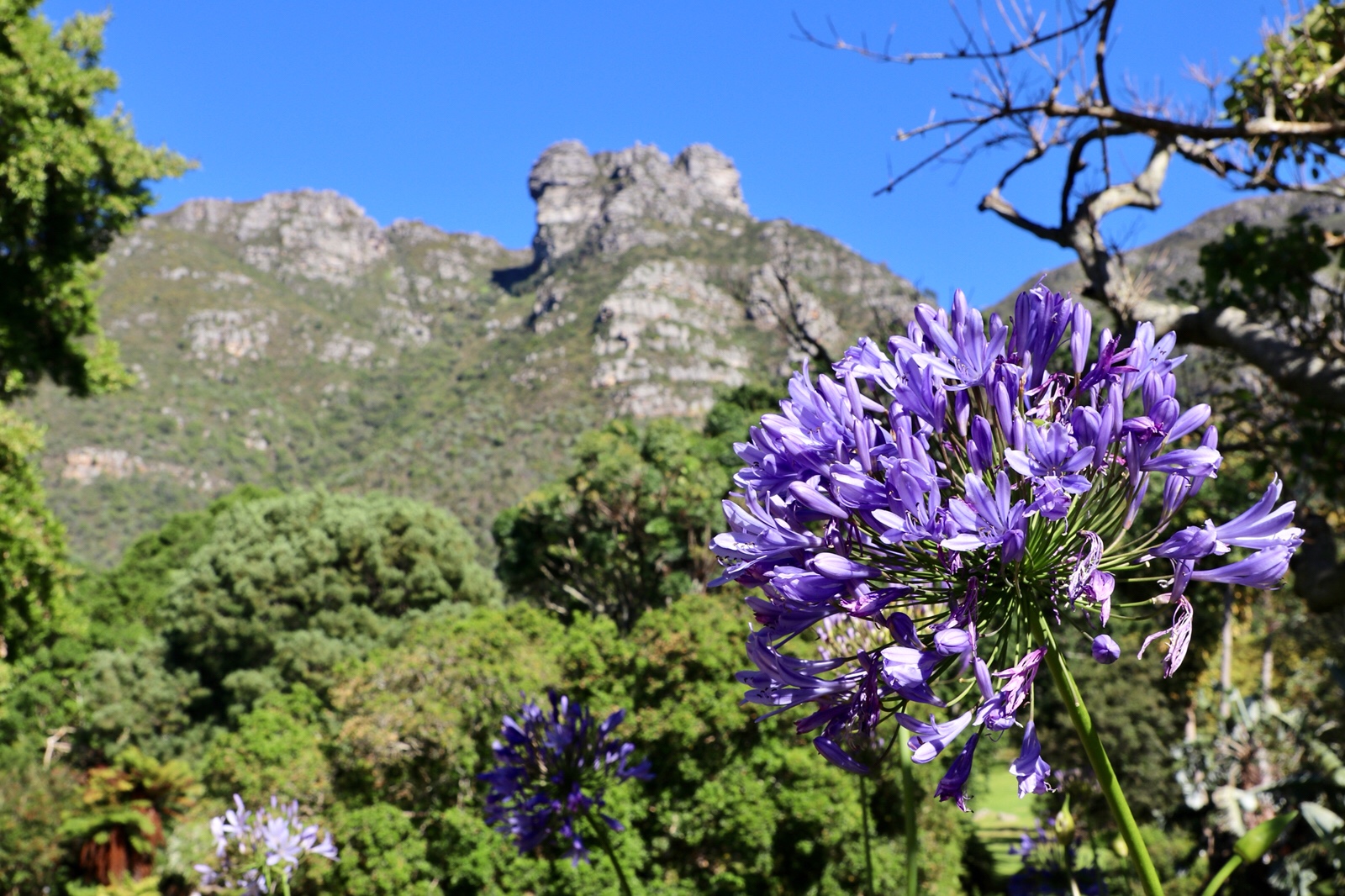 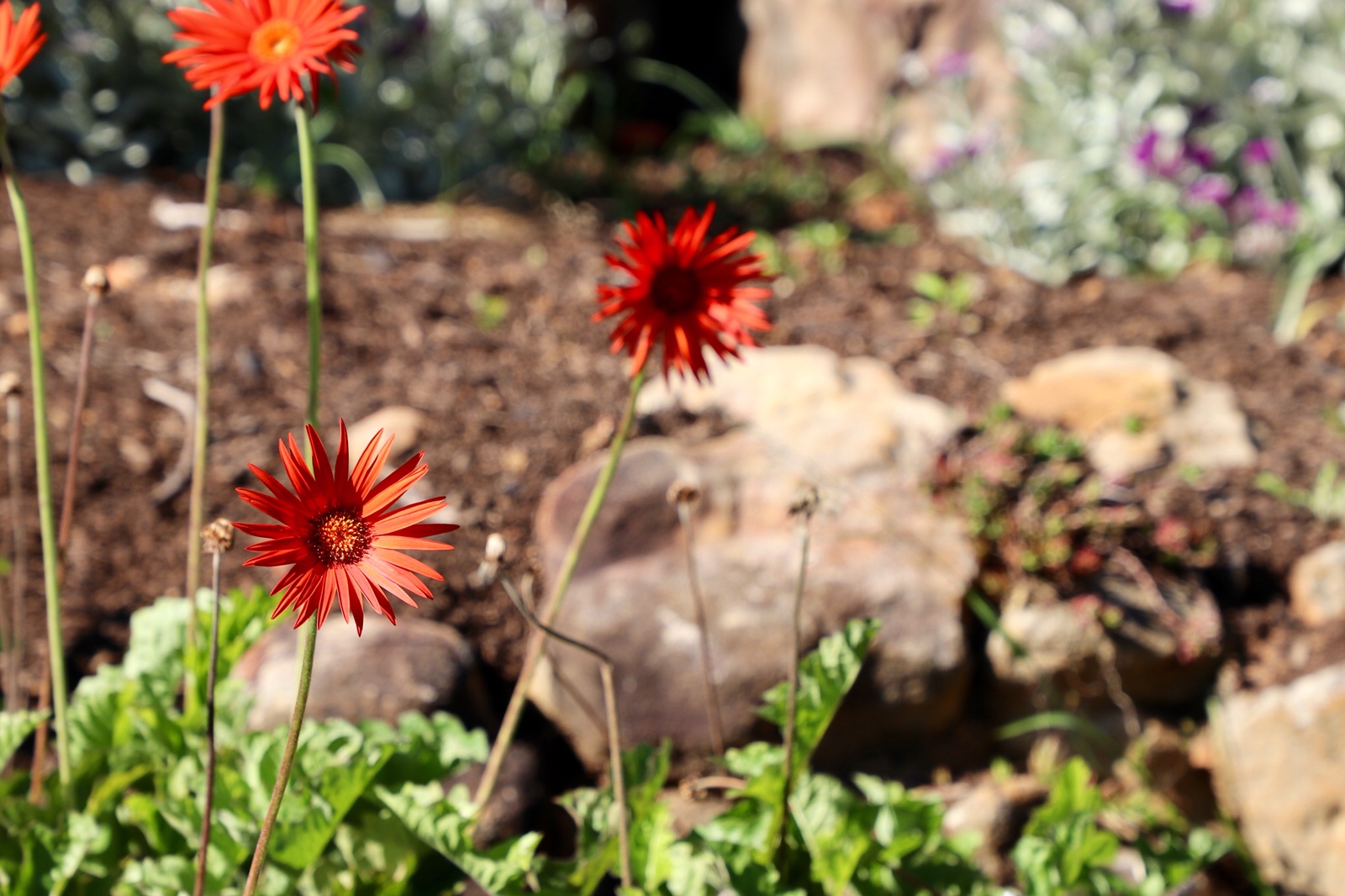 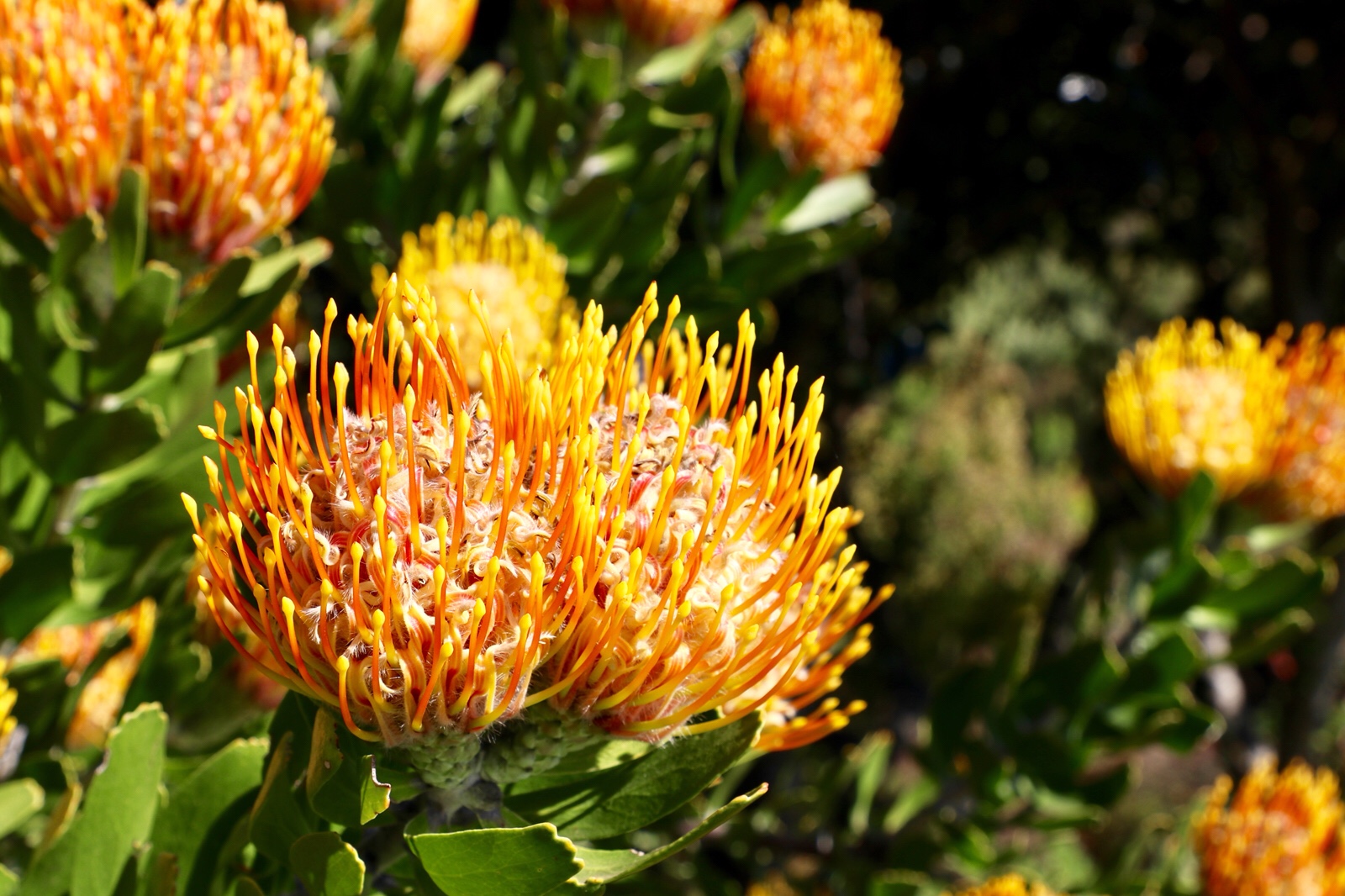 We walked along the canopy walkway, which wasn’t too exciting. There were much better views from a lawn higher up.

After we had walked around most of the paths, it was time to leave.

Next uber to our next stop, signal hill.

This is a 350m-high summit of this hill separating Sea Point from the City Bowl, right next to lions peak. The drive was pretty – winding up the side of the hill with the views of table mountain and the city all around.

At the top, paragliding was happening. And lots of people were on the hiking trails. It was pretty to walk around and look at the views.

The views on the way back down were even better.

Per the website, the queue for the table mountain cable way was now 2.5hours. But we thought we would go and have a look anyway. Winding up the side of table mountain, to the cable car stop. And it was chaos. People everywhere. The queue went on and on and on. There was no way we were joining that.

So we looked at the view from where we were. Which was nice anyway!

Then ordered our next uber (!) to head back into the city centre.

We stopped off at the District Six museum. This area used to be a mixed town of people of all colours. However, during the 1960s and 1970s it was decided that this would be a white only area. Around 50,000 coloured people were evicted and their houses were demolished. The museum has photos of what the area looked like, some signs and stories of people. It was very small, so didn’t take too long to walk around.

A block or so away was a very colourful building, which we went over to look at. It was a bakery, selling a huge array of colourful cakes, biscuits and cheesecakes. Woah. But the only vegan option was red velvet cake with no icing. Which isn’t exciting. So I didn’t buy anything. 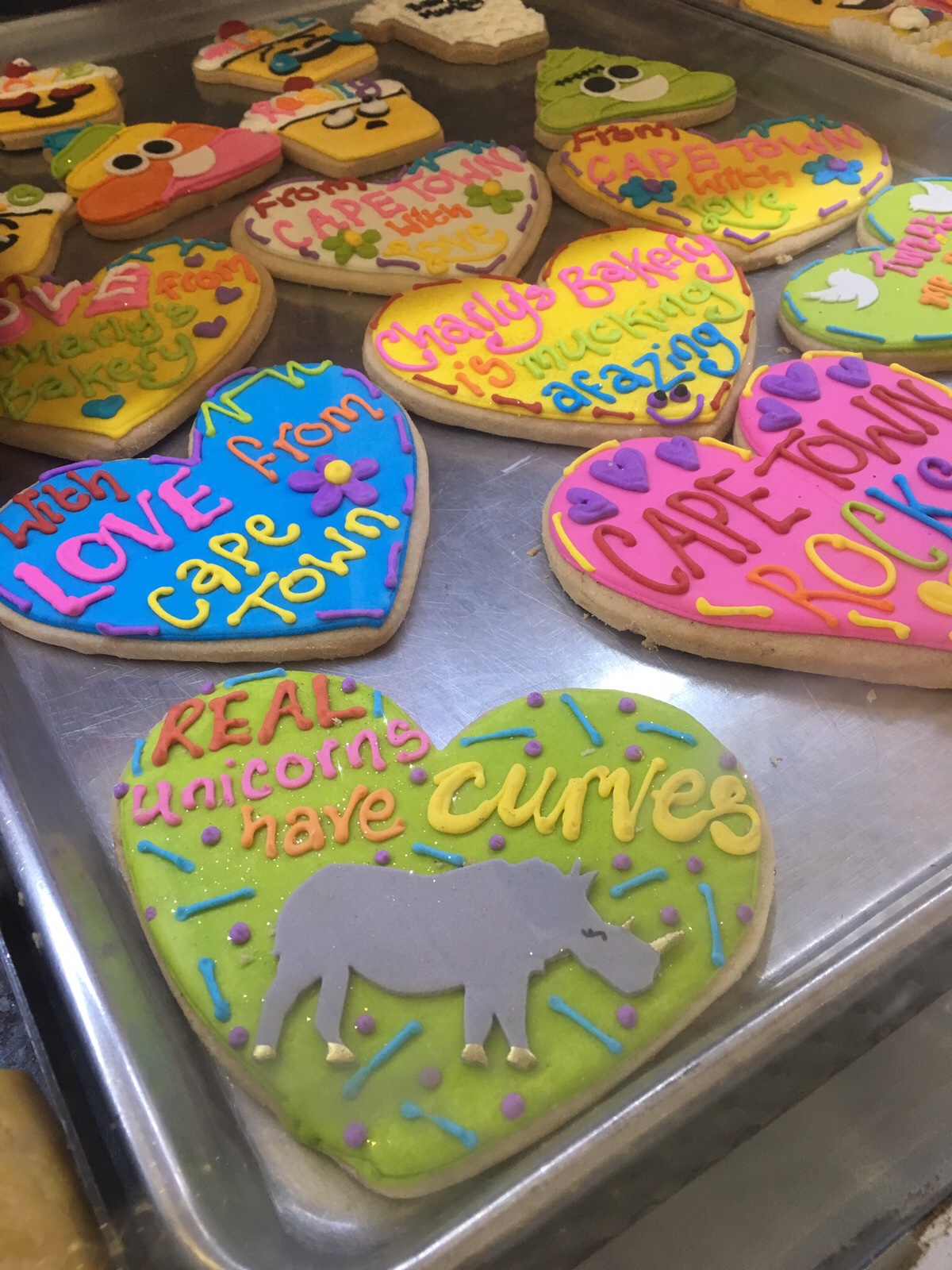 Next up, heading to the waterfront. We passed by the Castle of Good Hope. These are ruins of an old castle, which used to be the port when the Dutch occupied the area – and the water used to reach this point. It is now much further out.

As we were driving along, the ‘Noon gun’ went off. This is a cannon which blasts everyday at 12pm from signal hill.

The Alfred and Victoria Basins of the waterfront date from 1860 and are named after Queen Victoria. This is an area that I visited last time I was in Cape Town. And it was still the same.

We stopped for some lunch at a cool, modern looking cafe. I had a dragonfruit smoothie bowl. Which was so good. 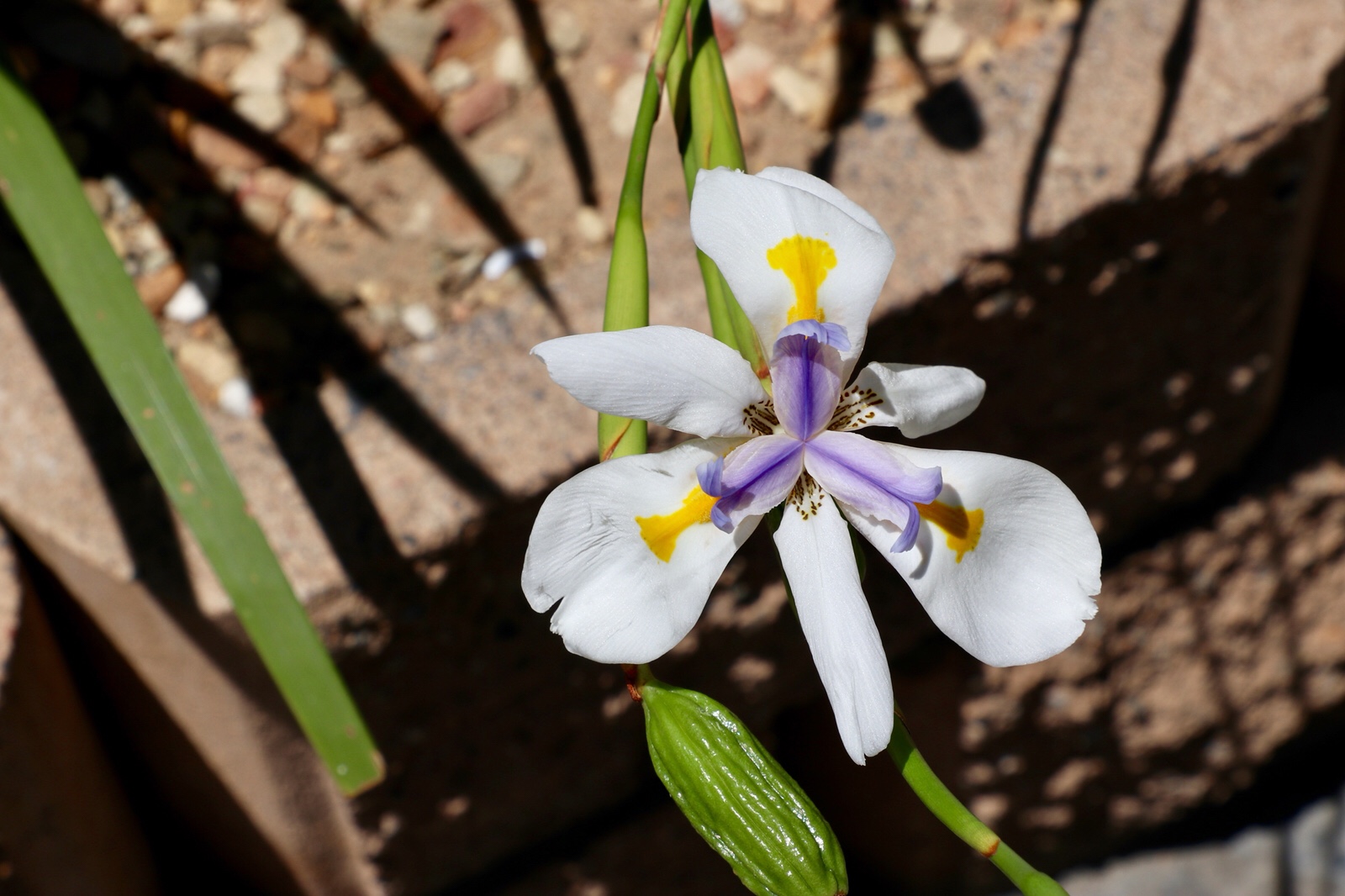 Then we just wandered around. Last time I was here I missed the big yellow frame which marks table mountain – and you can have a photo in it. We saw it this time, and it wasn’t that exciting. We have had better views.

The food market was cool. There was a small stall of the amazing gelato! So I got some mint chocolate chip (not as good as I was expecting) and a scoop of peanut butter. It was good, but not as good as the chocolate from yesterday. After ice cream and the smoothie bowl, I felt rather icecreamed out.

A bit more wandering and it was time for me to leave. Sad goodbyes, as my friend is staying here for a day longer than I am.

Back to the hostel to collect and repack my stuff. Got some takeaway salad for dinner. And then off to the airport. My 7th uber of the day. Rather ridiculous!!

I got to the airport around 3.30pm. I have too much luggage. Now 26kg. Whoops. So the guy made me repack until I was at 23kg. So carrying my elephant and some clothes in my already copious hand luggage.

My flight was at 5.30pm, to Durban. I haven’t been to Durbanbefore.

We were delayed. But by 6pm we were off.

Clouds had come over the city, but we had a great view of table mountain as we were taking off, and the orange sky over Cape point as we were ascending. So pretty. The southern-most point of Africa. I visited last time I was here.

What did surprise we, was the amount of townships that surround Cape Town airport. You can see some as you drive to it. But flying over, they stretch for miles and miles and miles. Tin roofs. Plastic roofs. Organised chaos. 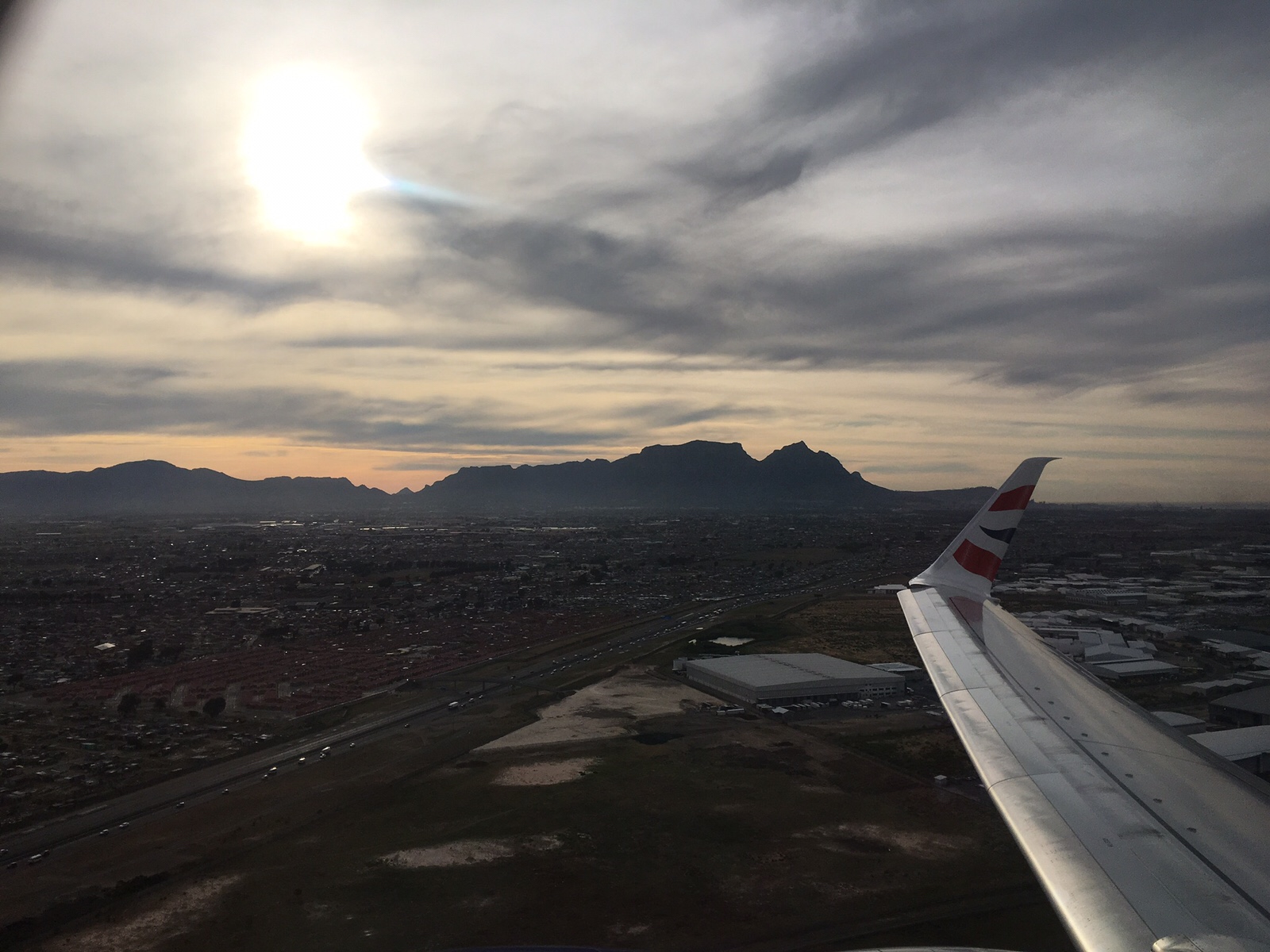 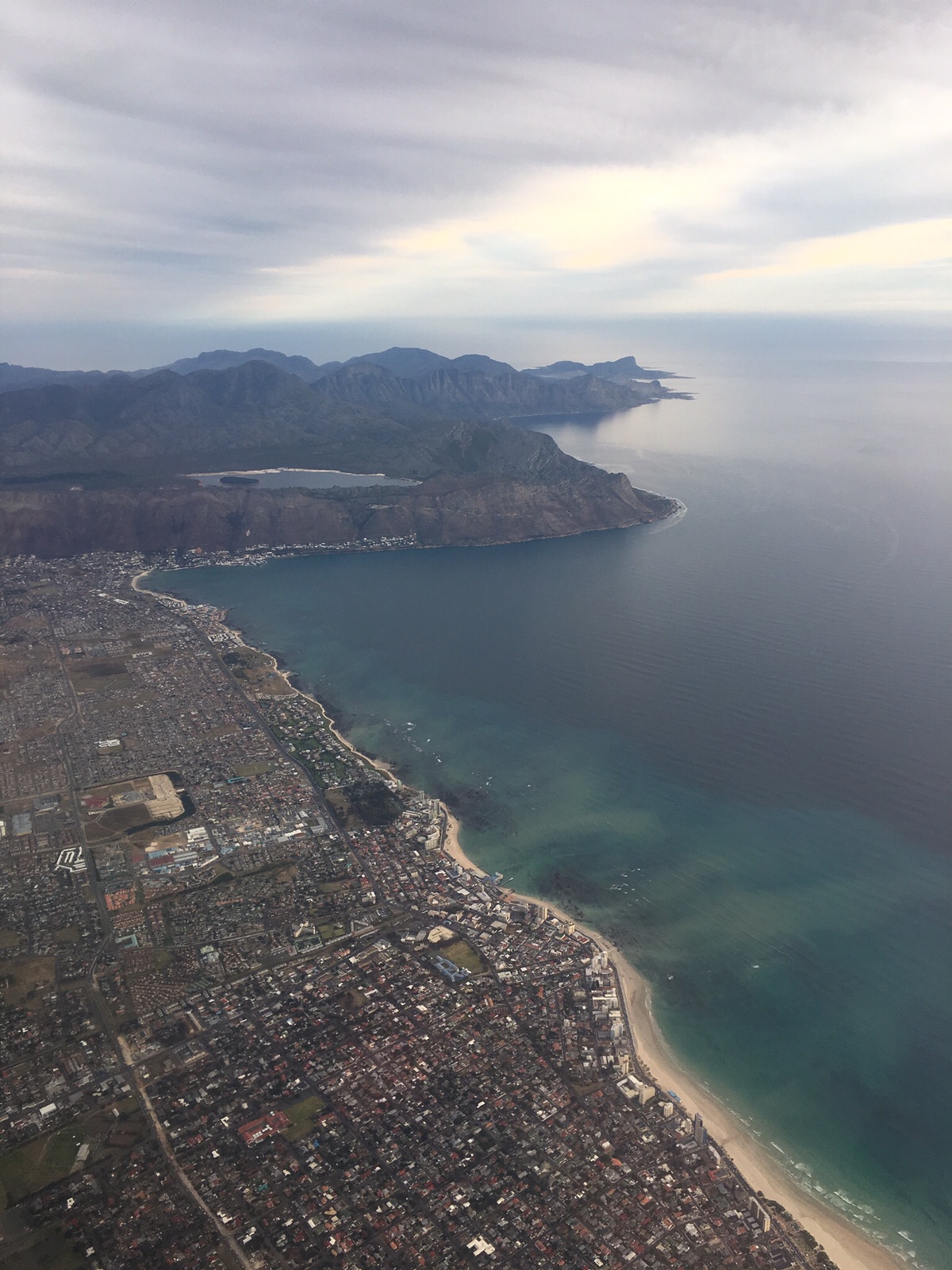 Our guide surprised us yesterday when he told us that he had lived in a plastic house in Zimbabwe for 10 years. Apparently it is not just the poor who live there. Many slightly-more-well-off people also do, as it is hard to buy land or rent a house in the city.

But by the time I had come out of the airport (which was surprisingly fast!), the rain has stopped. And my taxi was waiting.

It was an hour drive, south of the airport to the town of Umkomaas. We were driving fast. And right up behind the cars infront, a bit scary.

But we made it ok. Just after 9pm.

This is a small town. And really the only thing here is a few dive centres.

Straight to bed. And so nice to finally have a room and bed to myself.