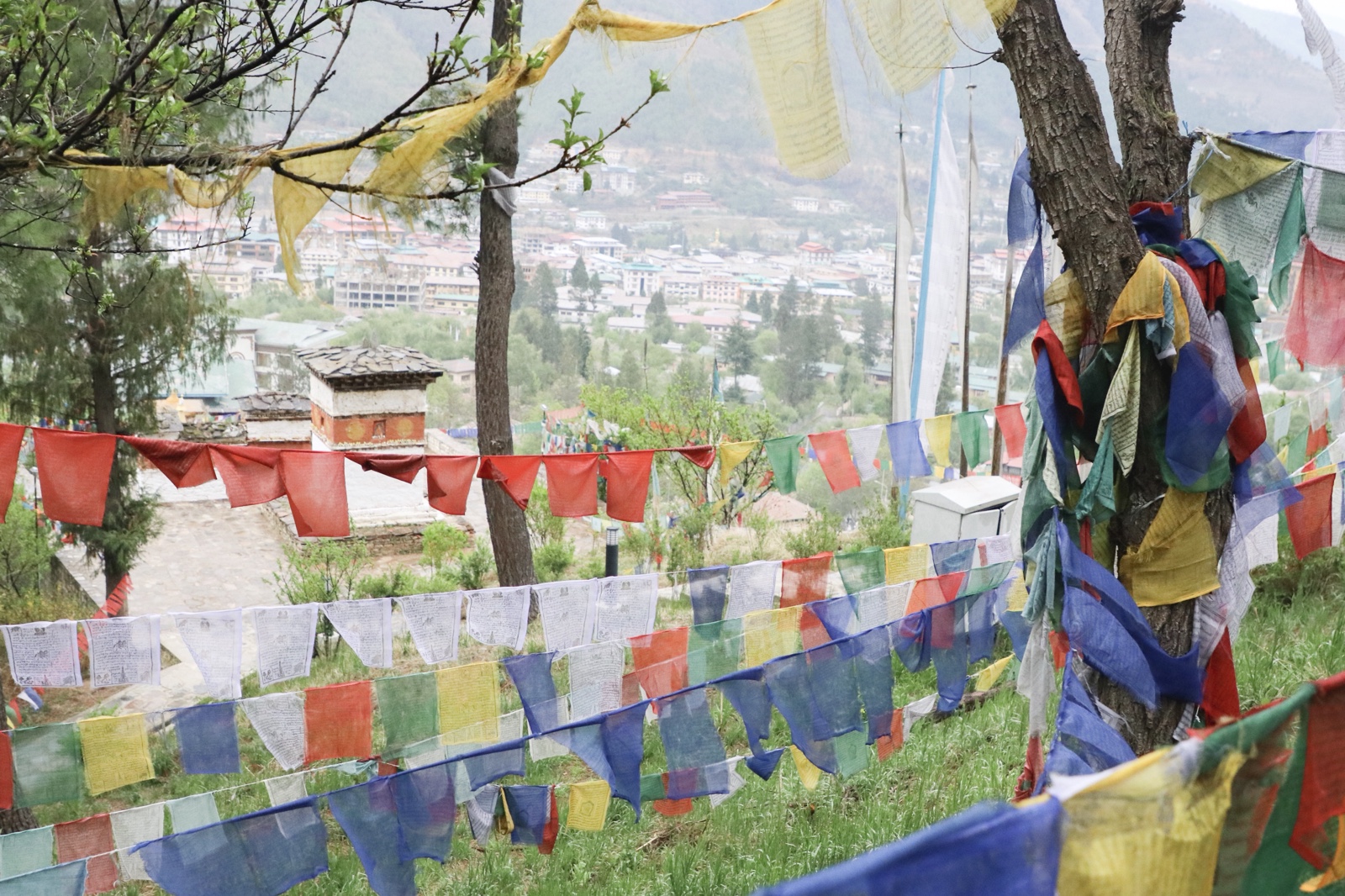 Finally, off to my actual destination of this trip (!).

Flying to Bhutan, there are only a few options. I could have flown from Kolkata (going in August anyway!), Kathmandu (been before and couldn’t be bothered with the faf of a visa), Bangkok or Singapore (but these were in the wrong direction). So that’s why I ended up with a weekend in Dhaka!

Bhutan tourism is unlike anywhere else in the world. For most people (being everyone except Indians, Bangladeshis and people from the Maldives) it involves a USD$250 fee per day. And you have to be with a guide pretty much at all times.

Your daily fee gets you transport, accommodation, food, a guide and all entrance fees. So in theory I shouldn’t need to spend any more money for the next 10 days!

$100 out of the daily fee goes towards free education and free overseas university, as well as free healthcare for all Bhutanese people.

Bhutan is also unique in that it measures its success through Gross National Happiness (GNH) rather than GDP. GNH encompasses several aspects including preservation of culture and the environment.

I was dropped off at Dhaka airport at 7.30am. To chaos. The queue to get into the airport was as long as the airport. But I spotted a foreigner only entrance, with no queue. Passport queue took forever and water scanning was at the gate. Not ideal.

It was a very short flight – arriving at 10.15am. To land in Paro, the plane weaves between the mountains. We followed an S shape, through the mountains for quite some time – and were very close on each side! Only a handful of pilots are authorised to fly this route. And there are only two airlines operating here.

Despite being early, I had to wait several hours for more planes to arrive, for the rest of my group.

Our guide met us in national dress. The locals seem to wear this pretty much all the time – but it is mandatory at certain locations including temples.

We finally got going at 12.30pm. Out of the airport and straight into the countryside.

There are only around 750,000 people in the whole country. So it’s not exactly densely populated.

All the houses are extremely elaborate – they look like temples! All new buildings are the same – they have to be constructed in the traditional style.

It took around 1 hour 20 minutes to drive to the capital of Thimphu. A slightly more dense collection of buildings!

Tea seems to be an obsession. I was offered tea whilst waiting for hours at the airport. And offered tea as soon as we arrived here.

It’s also lunch time. Lunch was good – rice, noodles, salad and fried bitter gourd! Rice here is red – but they wash it even more for tourists, as apparently some wouldn’t eat red rice…! But it’s still a bit pink.

The main dish of the country is chilli cheese. Chillis, in cheese. Shame it doesn’t come without the cheese!

After lunch we went for a walk around and up to a nearby temple. Changangkha Lhakhang. Paths covered in prayer flags. And a temple building with prayer wheels circling. It was pretty. 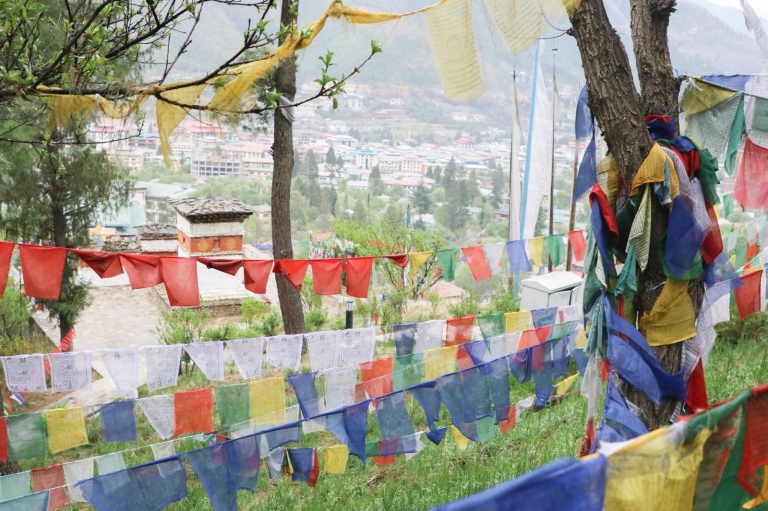 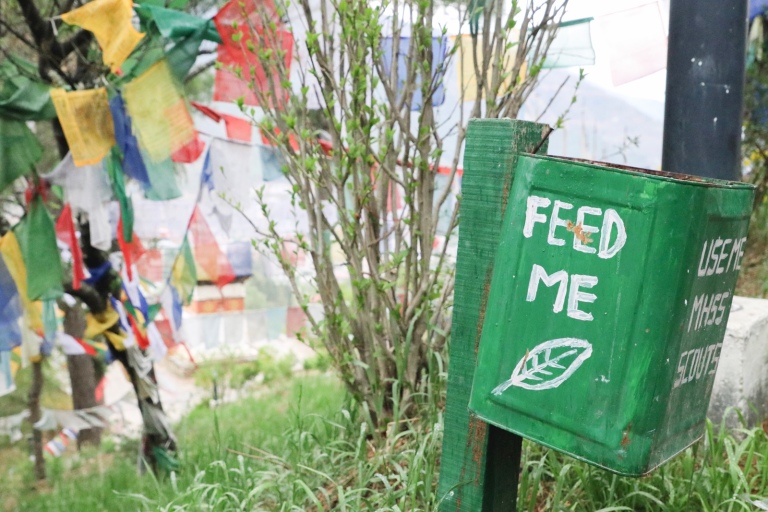 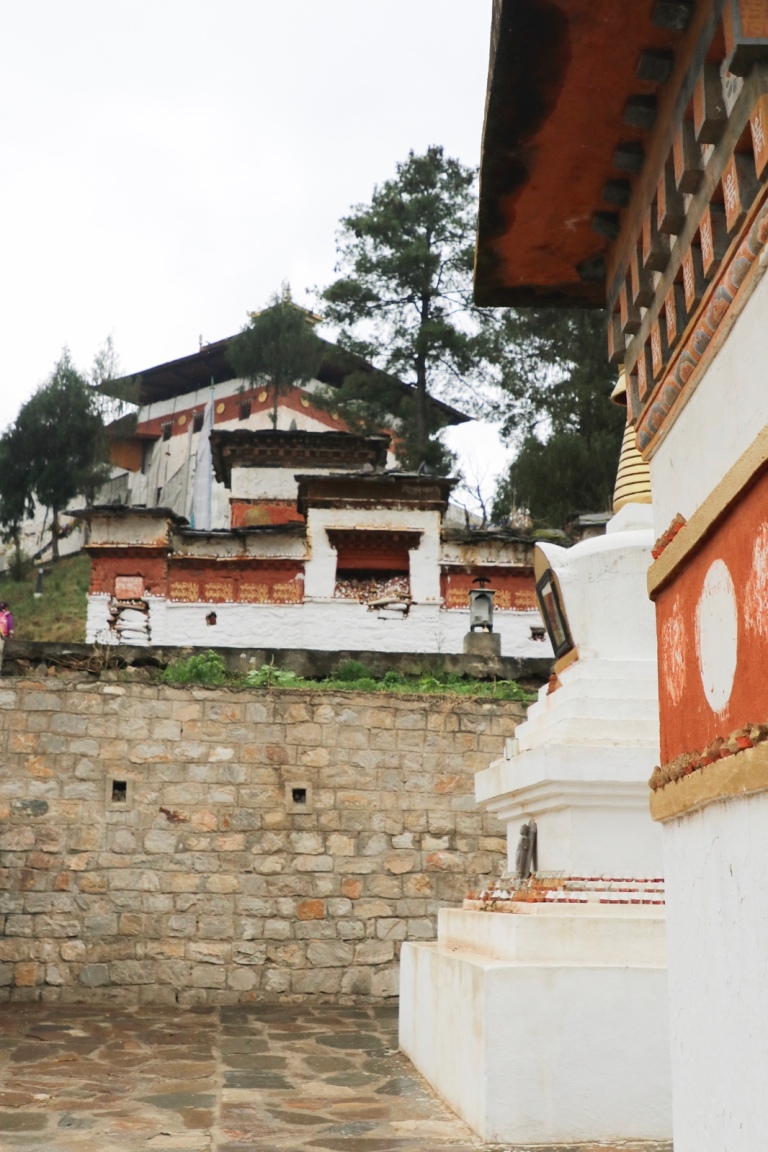 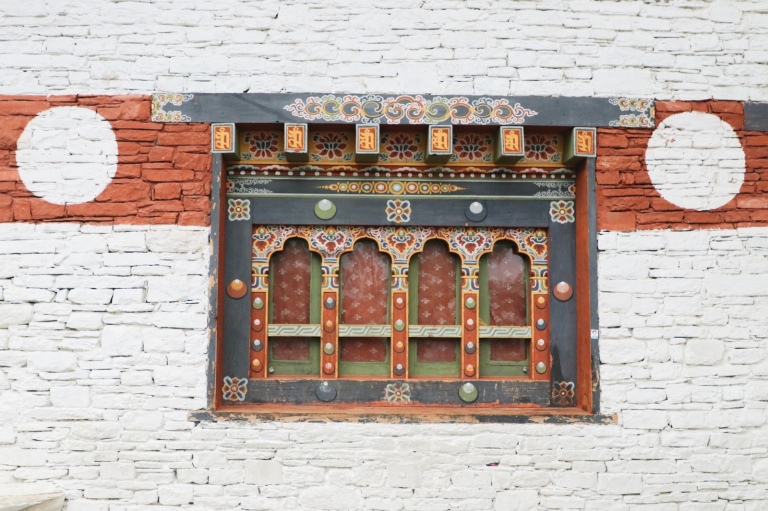 We walked through a few streets, but didn’t have much time. And it was a 30 minute uphill climb back up to the hotel. 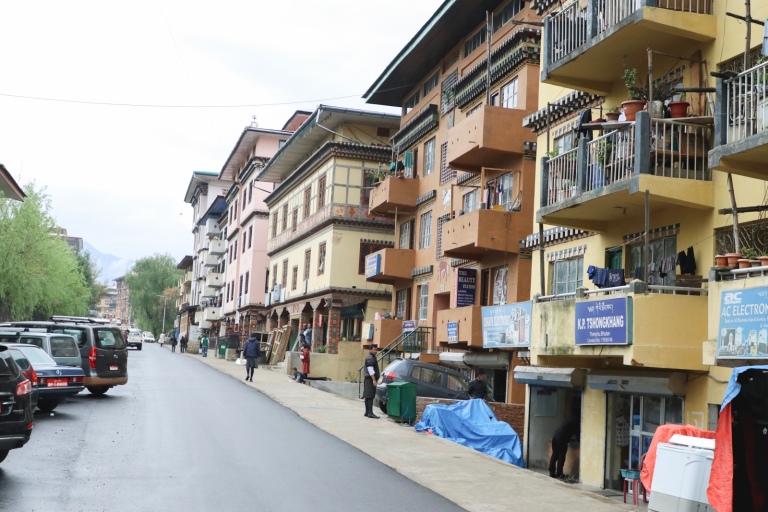 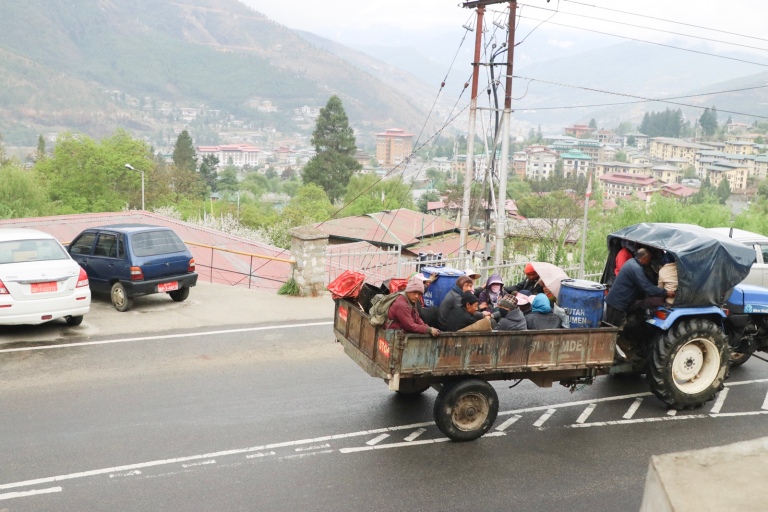 Just as we got back to the hotel, it began to pour with rain. It’s not supposed to rain this time of year – apparently there has been a lot more than usual. They are blaming climate change.

At 5.30pm we had a group meeting, then dinner. Similar to lunch – rice and vegetables!

The weather was a bit better today. So we had great views from our balcony, all the way down into the valley of the town.

Breakfasts wasn’t too exciting. I had some cornflakes and a banana.

As well as a guide, we have a driver for the week. Called Mr Joker. I couldn’t work out if that was his real name, but that was what everyone (literally everyone in the whole country) seemed to know him as. He used to be the driver for the queens mother.

Out first stop was the Motithang Takin Preserve. Apparently this used to be a zoo, but it was decided a zoo was not in keeping with Buddhist beliefs. However, the takins were too tame to be released back into the wild. So now they protect them here. They are virtually impossible to find in the wild. They are a strange animal, a mix of cow and goat. 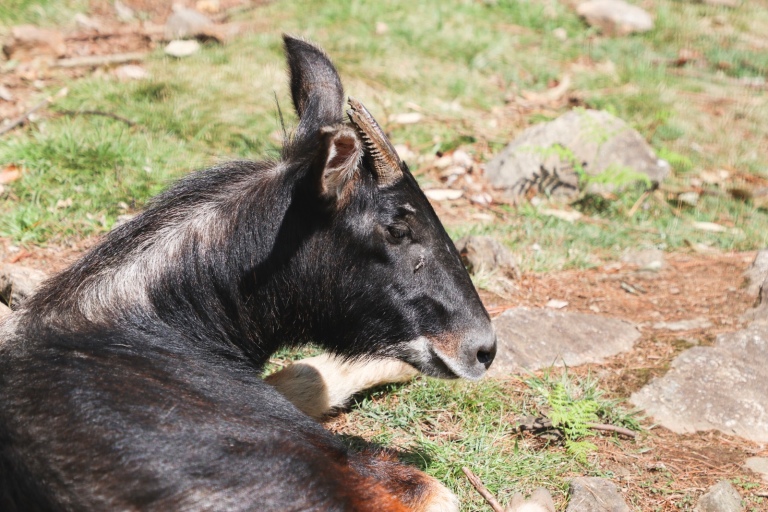 We stopped off at the National Memorial Chorten, a Tibetan-style stupa which was built in 1974 as a memorial to the third king. Lots of people come to worship here, circling around the stupa. You should circle three or more times apparently. Locals were carrying prayer beads and prayer wheels as they walked. 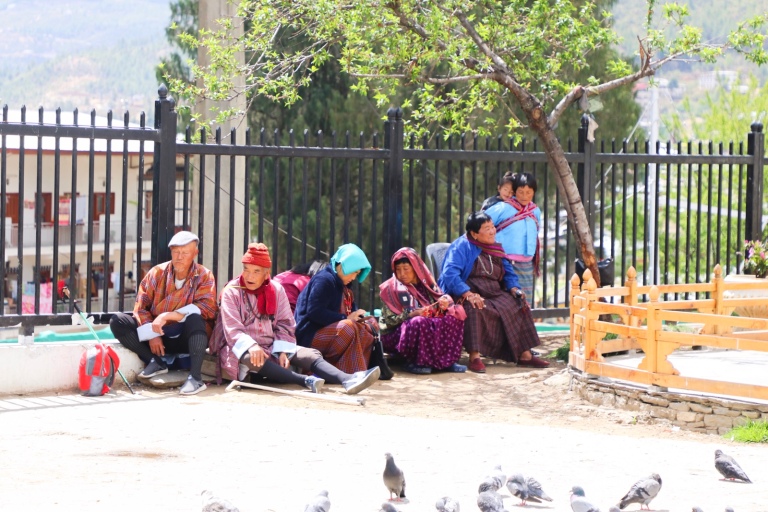 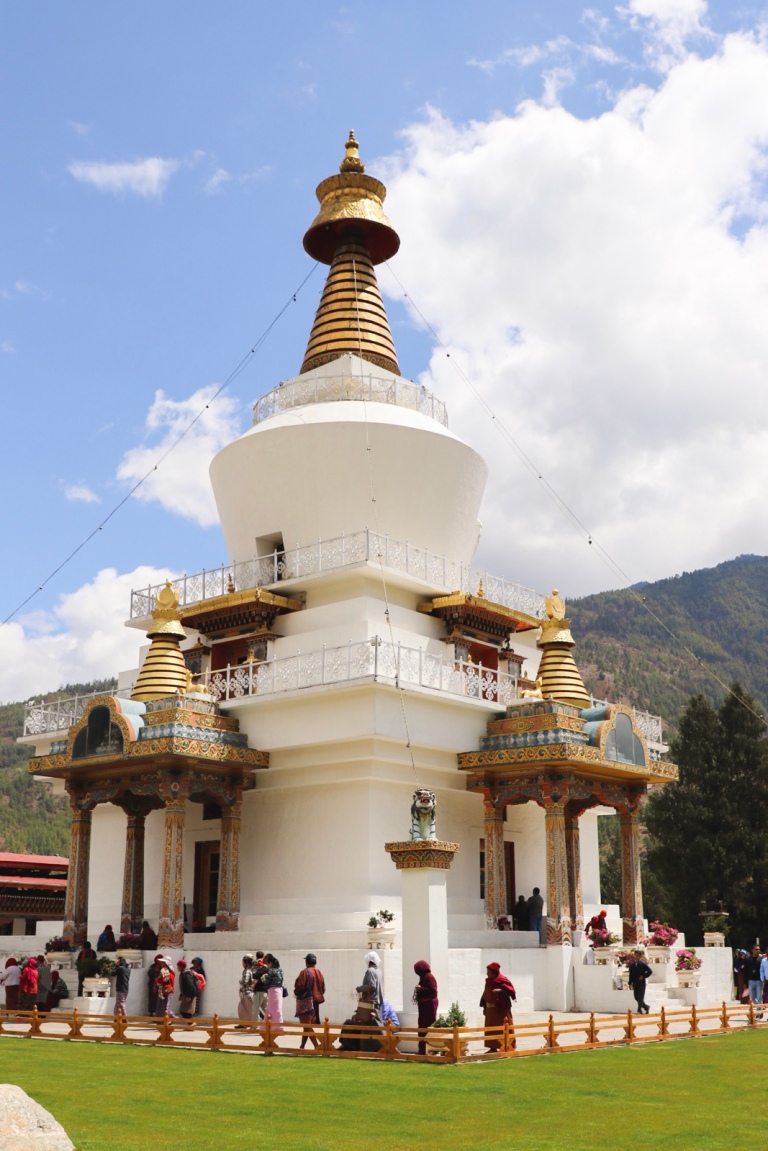 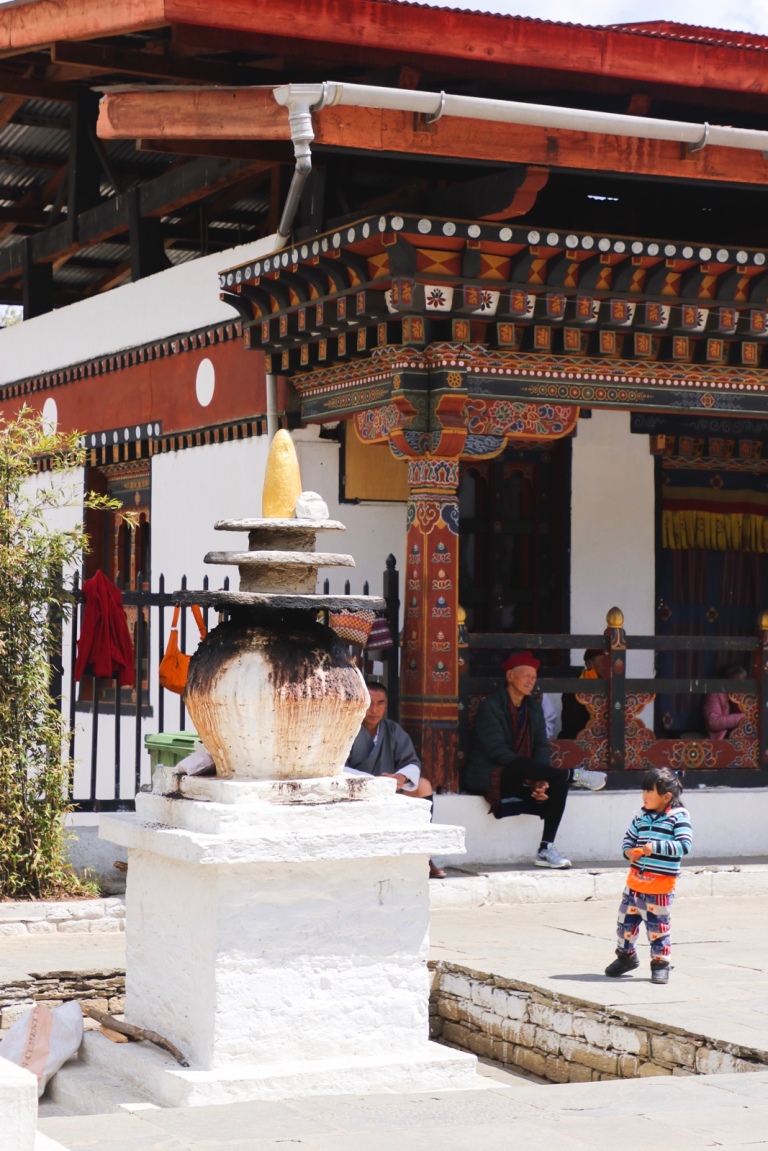 In one corner was a small structure, filled with large prayer wheels. Lots of older people were sitting here, keeping the wheels spinning.

Next up was Buddha Dordenma. A 51m statue standing on the side of the mountain and is the tallest sitting Buddha in the world. The statue was made in China. Then cut up into pieces. Shipped to Bangladesh. Then driven to here and reassembled! It is not yet finished on the inside. 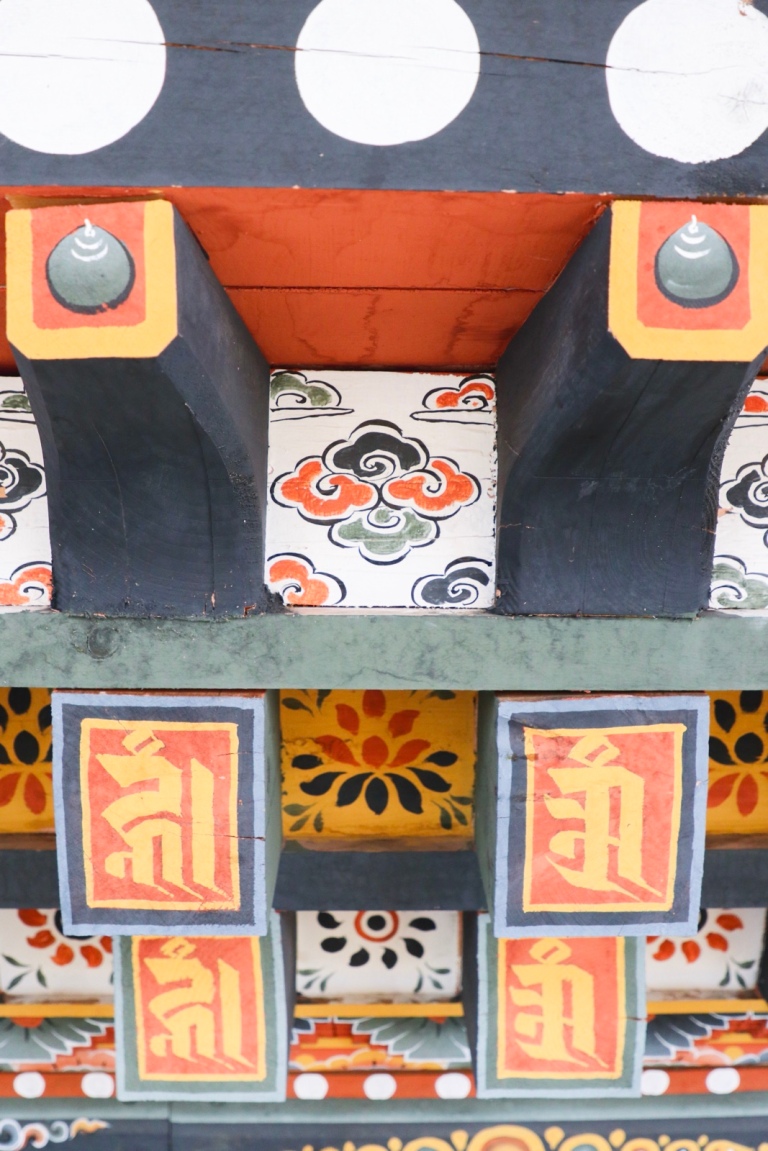 It is three stories inside, but only one is currently open. We went inside, it was large and modern. The ceiling was elaborately painted with mandalas, but some were not yet finished.

Each mandala tells a story. The inside is the destination, but in order to get there, there are 4 gates around the outside. On the outside are lots of different tasks. This represents many different ways to achieve the ultimate goal.

The body of the Buddha will eventually be filled with 125,000 smaller statues of Buddha. Some are 11 inch, some are 6 inch. They aren’t all in there yet as they are still being made!

We wandered around the large expansive outside area, which is also full of golden statues each holding a different item.

For lunch we stopped at a local restaurant. Apparently there is a list of ‘approved’ restaurants that guides are allowed to take tourists too. Lunch was good – vegetables and rice again (I think that’s what I’ll be getting all week!)

We stopped off in town again. This time for an ATM (which was successful!). Only Bank of Bhutan accepts a limited number of foreign cards, Nationwide worked, Halifax didn’t.

Then to the post office. On trip advisor the post office is the top sight in Thimphu, which seems a little ridiculous. But it’s because they will print stamps with your photo on it! For $9! It’s cool though, I got some. Very easy, you just airdrop a photo to them and they print it instantly!

At 5pm we got ready to head to the Tashi Chhoe Dzong. A Dzong is a monastery and administration office together – a fort style monastery! It only opens to the public from 5.30pm, as during the day it is the administrative office of the king. It is also the summer residence of the monastic body (with winter being spent in Punakha).

There was security to get in – bag scanning! Then up an elaborate staircase, into a huge courtyard.

The walls of every temple are very elaborately decorated. Telling stories of Buddha. Inside the middle of the temple were three large chairs, each are reserved for particular people (including the king, and the head of the monastic body).

zIt was getting dark when we headed out, so not ideal for photos. But as we left the main building, it lit up in red! Very pretty. 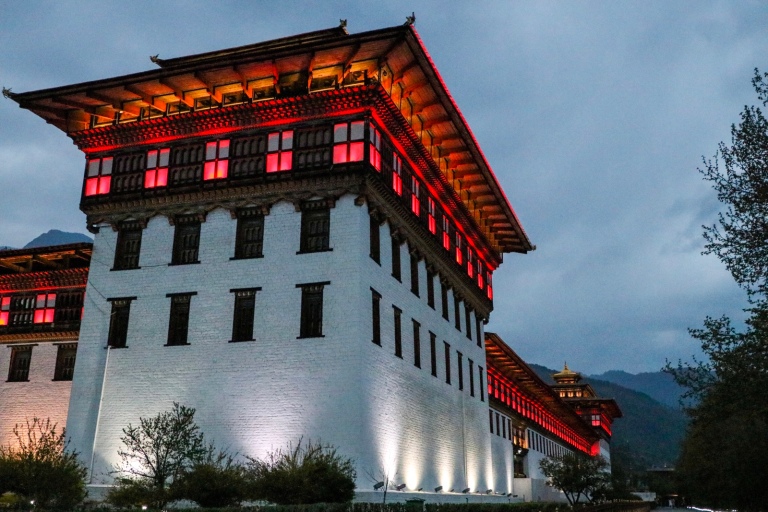 We had dinner back at the hotel again. Vegetables and rice.