So this idea started a few months ago. On another British airways flight, browsing the route map in the back of the magazine. Wondering where I could go next. And I spotted that BA fly to Algeria. And that was that. I had to go.

Once I had actually done a bit more research, I found out that per the FCO website it’s a very safe country (all green, except the border areas around Libya, Tunisia, Mali and Morocco!). But Algeria is the biggest African country, and Algiers is no where near those.

And you need a visa. Which needs a lot of documents. None of which are hard to get, but it doesn’t help that they change the rules all the time without publishing it. So the first time I got turned away for not having an invitation letter. Despite that not being a required document.

And you physically go to the consulate in Acton. Which is a hassle. And get questioned why you want to go to Algeria because it’s ‘not safe for people like you’.

The flight was at 8.30am. And it was almost full. With locals. I think there were 2 other tourists.

And only takes 2 hours 20 mins. So really not that far, just a little bit further south than Ibiza.

We had great views of the bay of Algiers as we came in to land, into a dusty, sand coloured land.

Immigration was not my friend.

First of all I didn’t have a landing card. No one handed them out on the plane. And there weren’t any in the arrival hall.

Then after some questions about my job and who I work for, the man walked off with my passport. Not a good sign.

I was questioned by 3 separate people – what are you doing here / who are you meeting / do you have any friends / are you trying to meet someone / what is your job / why do you want to come here / why don’t you stay at home / are you alone / where are you staying / why are you here for only a few days.

It seems the concept of a weekend away, by yourself, is absolutely unheard of.

Despite already providing all the documents and proof to get a visa, it seemingly wasn’t good enough.

An hour later, after a lot of walking around by the immigration man, consulting every single other immigration officer, he stamped my passport and let me in.

Then customs. I was stopped for having a camera. And asked if it zoomed.

Then just as I was about to step out of the airport, I was screamed at to stop. Again they took my passport and took my camera. More quizzing.

Again asked my job. Accountant. It is rather perplexing that an accountant has a camera. I must be a journalist. Of course. 3 men later, my camera and passport were returned.

And I was out.

What a waste of time.

I was being picked up by the man who helped arrange my invitation letter. He was confused about my experience too. Perhaps they just don’t get many young, white girls wanting to be a tourist.

Then what should have been an easy 20 minute drive to the hotel took nearly an hour. A police road block. Maybe checking for people going to the city protest that has been happening every single Friday since February.

But finally made it.

For the rest of the afternoon, I went for a walk around the botanical Gardens. Almost completely deserted. Pristine lawns, a huge variety of different plants and trees, and a huge white mansion in the distance. It was quiet and pretty.

I also walked around the complex near the hotel – a huge concrete area, with the national library and views up to a memorial monument. 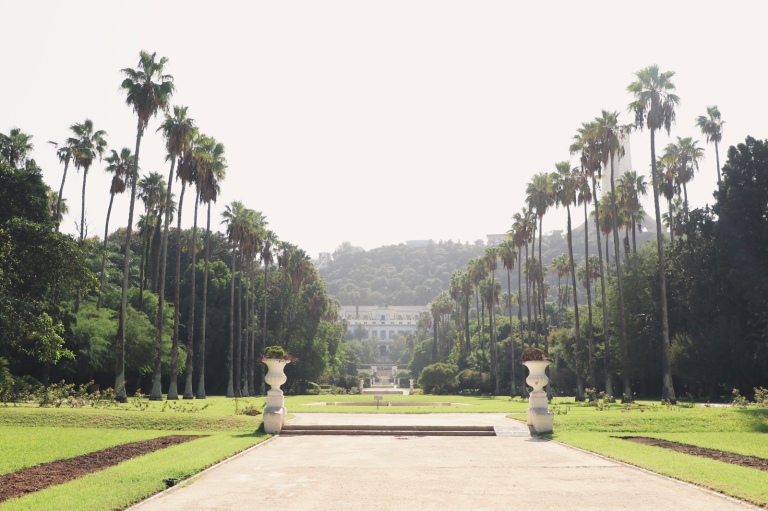 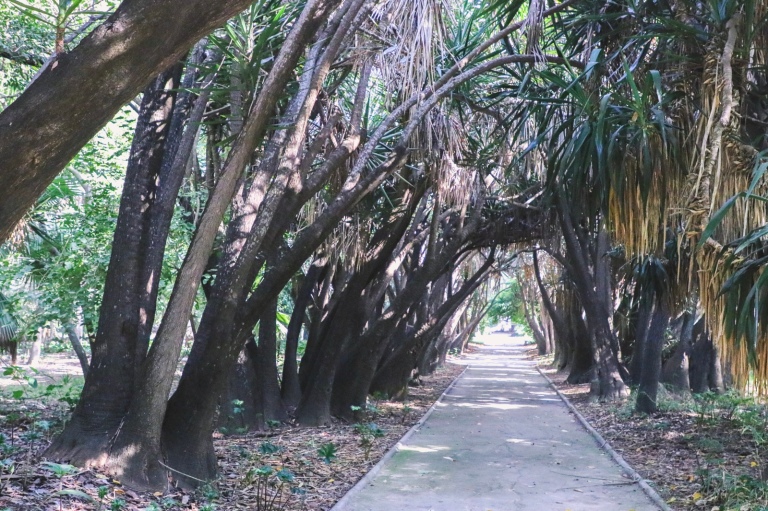 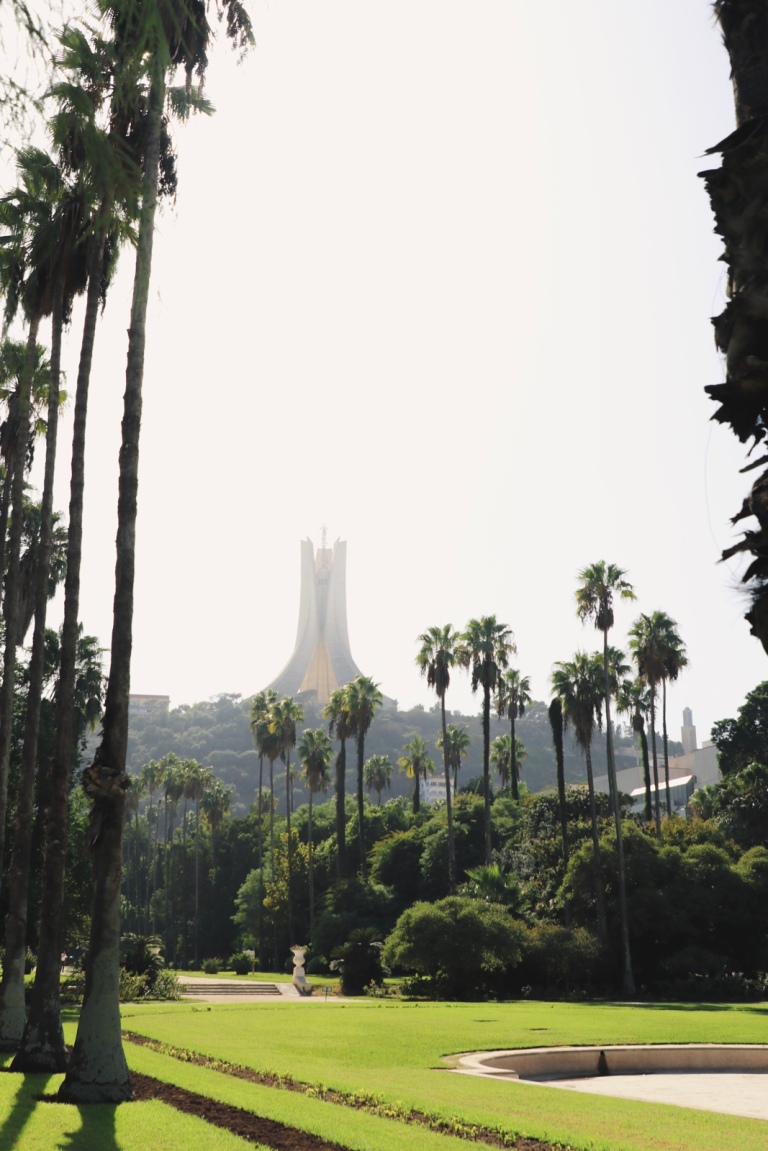 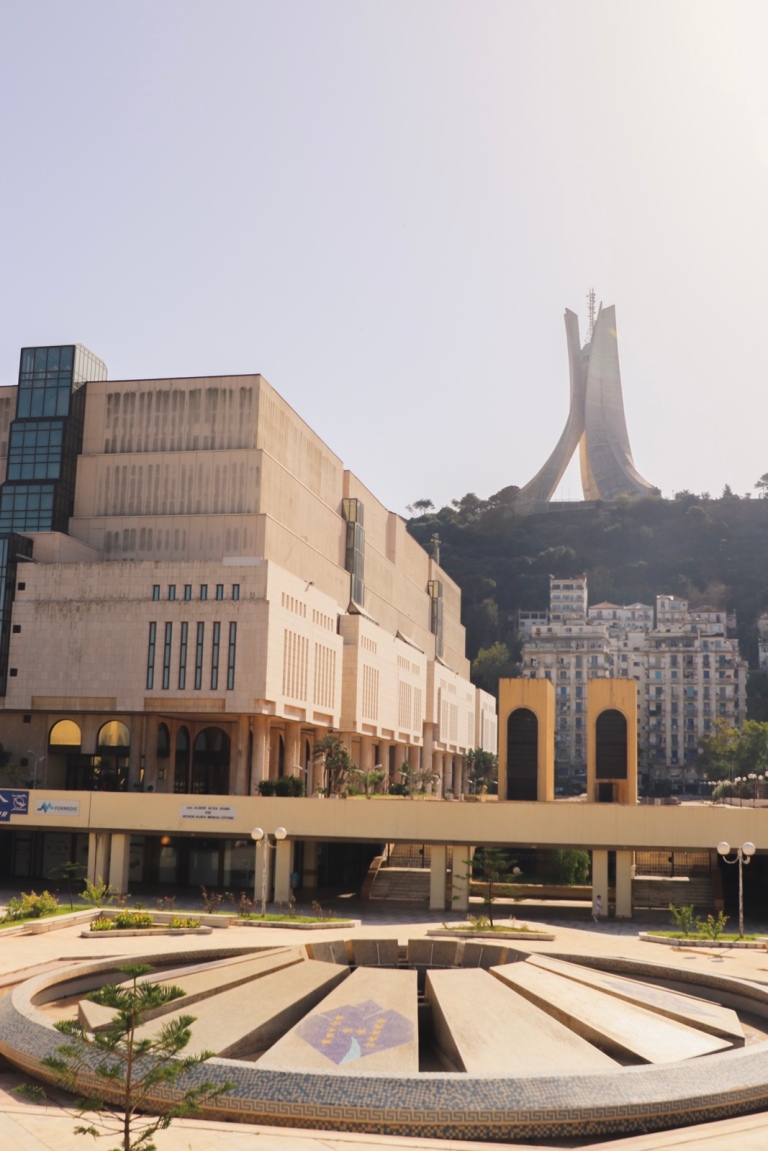 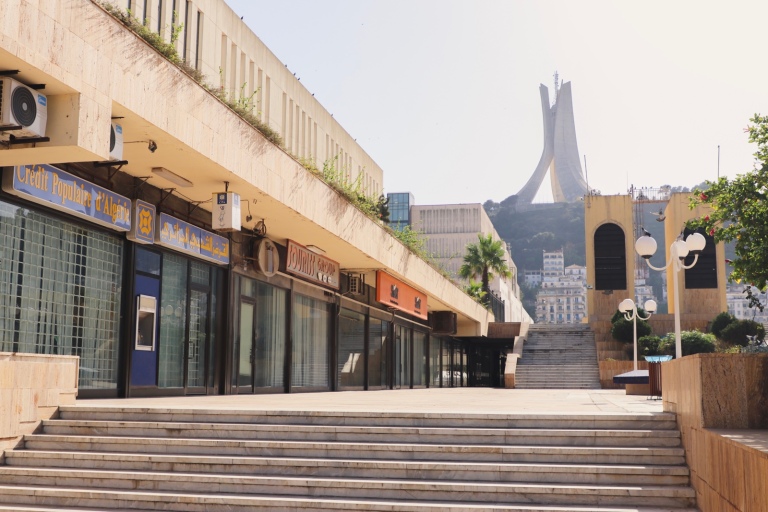 It was a struggle to get up. I was tired.

Algeria is on the same time zone as England, so I didn’t even have a time difference to deal with!

I was picked up for a day around the city and we headed off to the metro. A very new, modern metro. Felt just like Europe.

We went a few stops, into the city centre. And came out into a tree-lined road surrounded by white, old, French style buildings lining every road. Small shops at ground level and flats above. It was pretty. 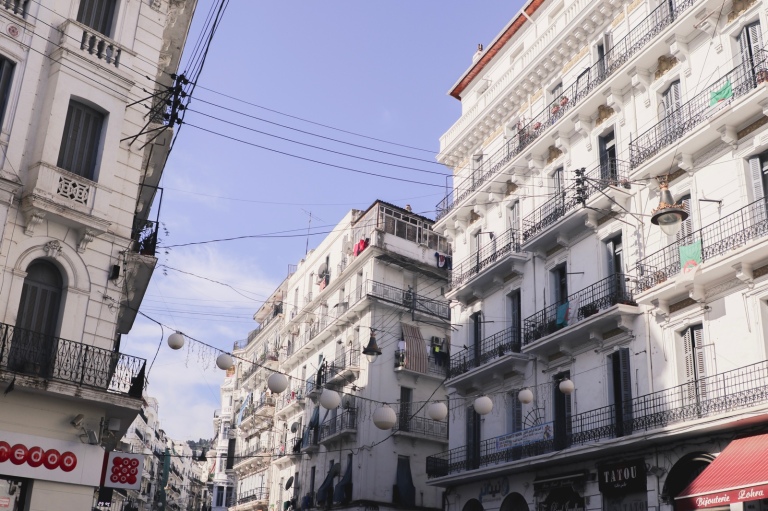 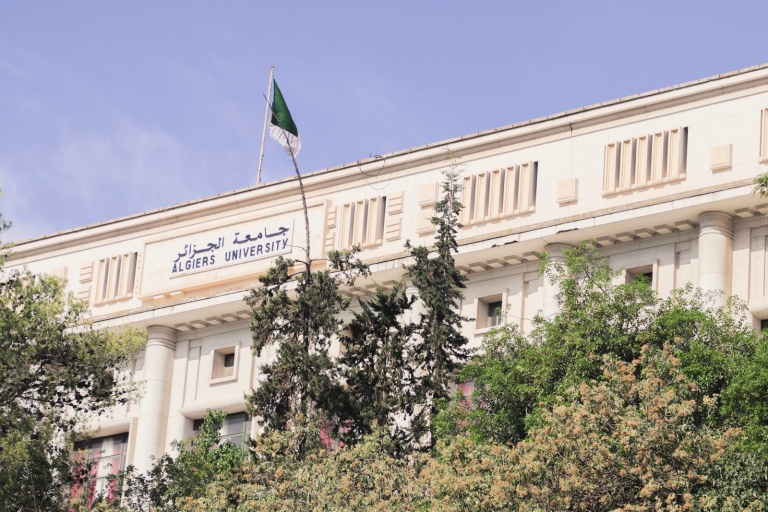 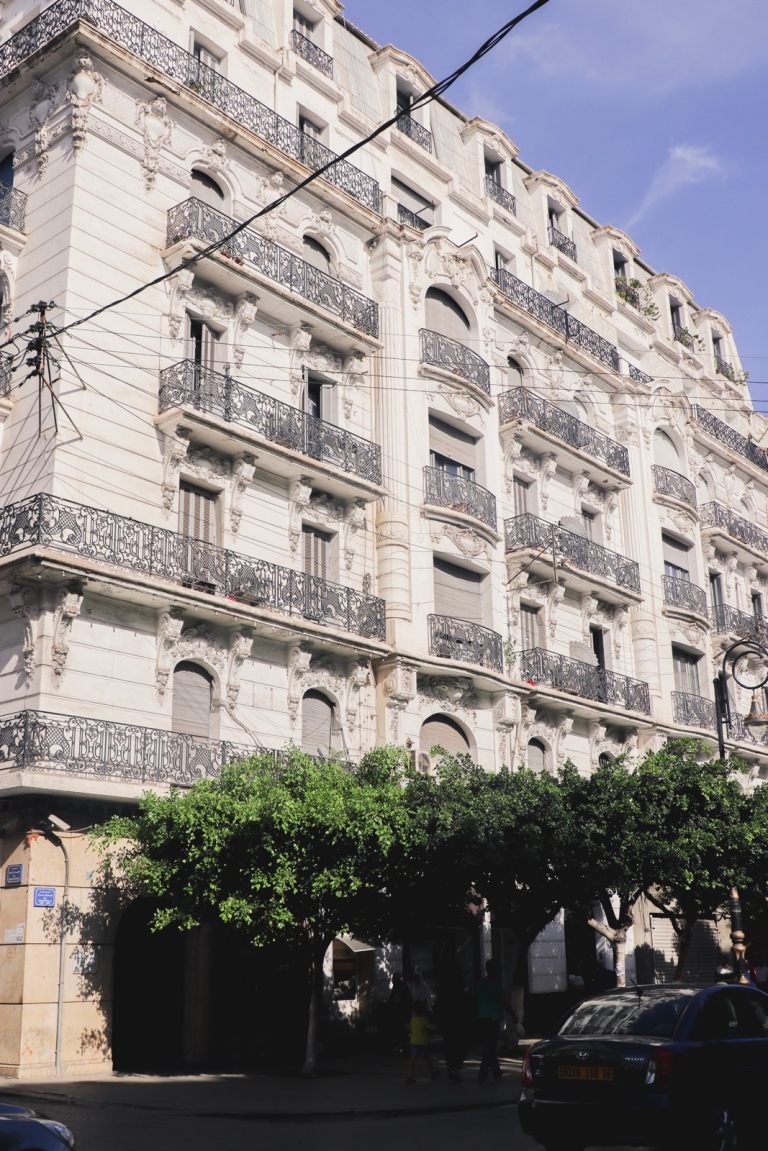 There were a few places that I had to put my camera and phone away. Apparently police are taking to quizzing tourists about what they are doing /trying to prove you are a journalist (spot the theme?). Surprisingly we didn’t get stopped once all day. 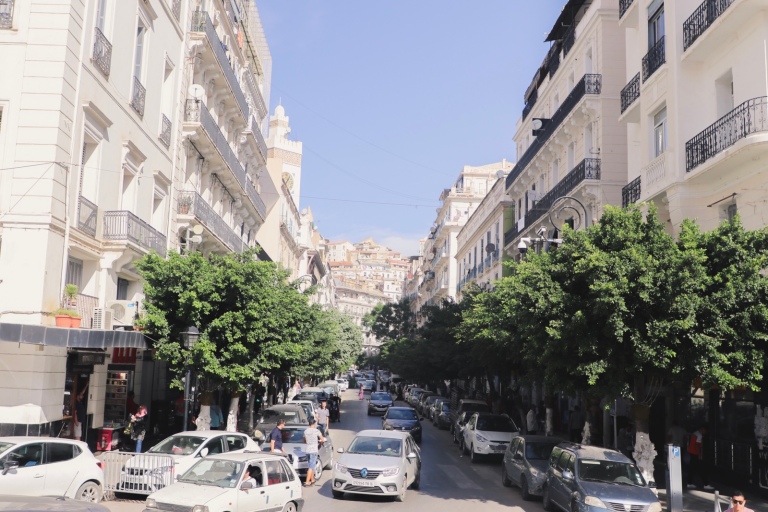 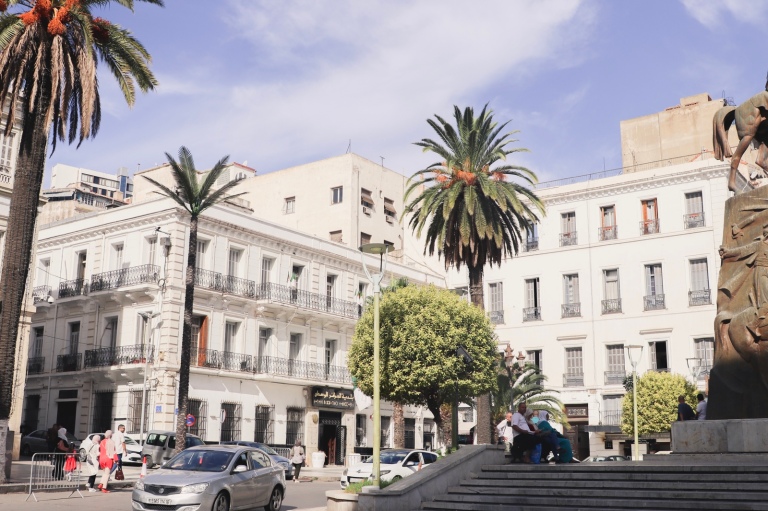 After walking down a few streets, we caught a taxi up the hill. Taxis run a set route and you just get in and out whenever you want – and so does everyone else. So the car was jam packed!

We got out at the top of the Casbah. This is a UNESCO listed maze-like neighbourhood, still home to 50,000 people.

The Casbah was originally a port town, later taken over by French colonisation and then for terrorists during the war of independence.

Lots of steps and winding narrow paths, between buildings which are slowly collapsing on each other. 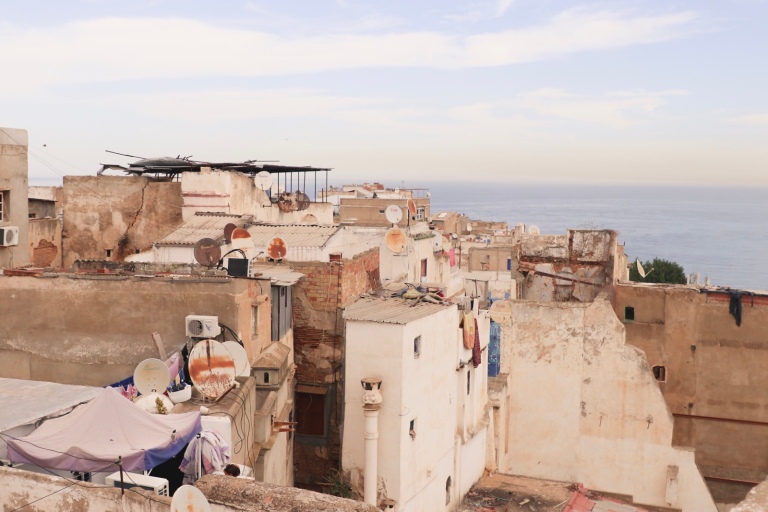 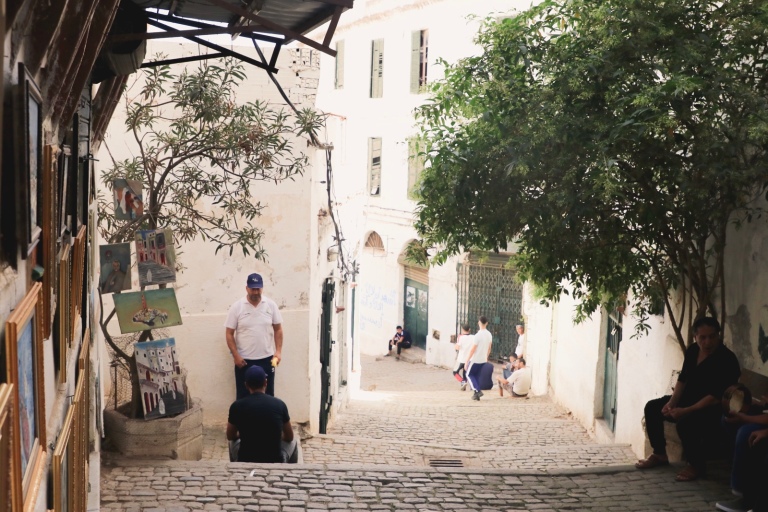 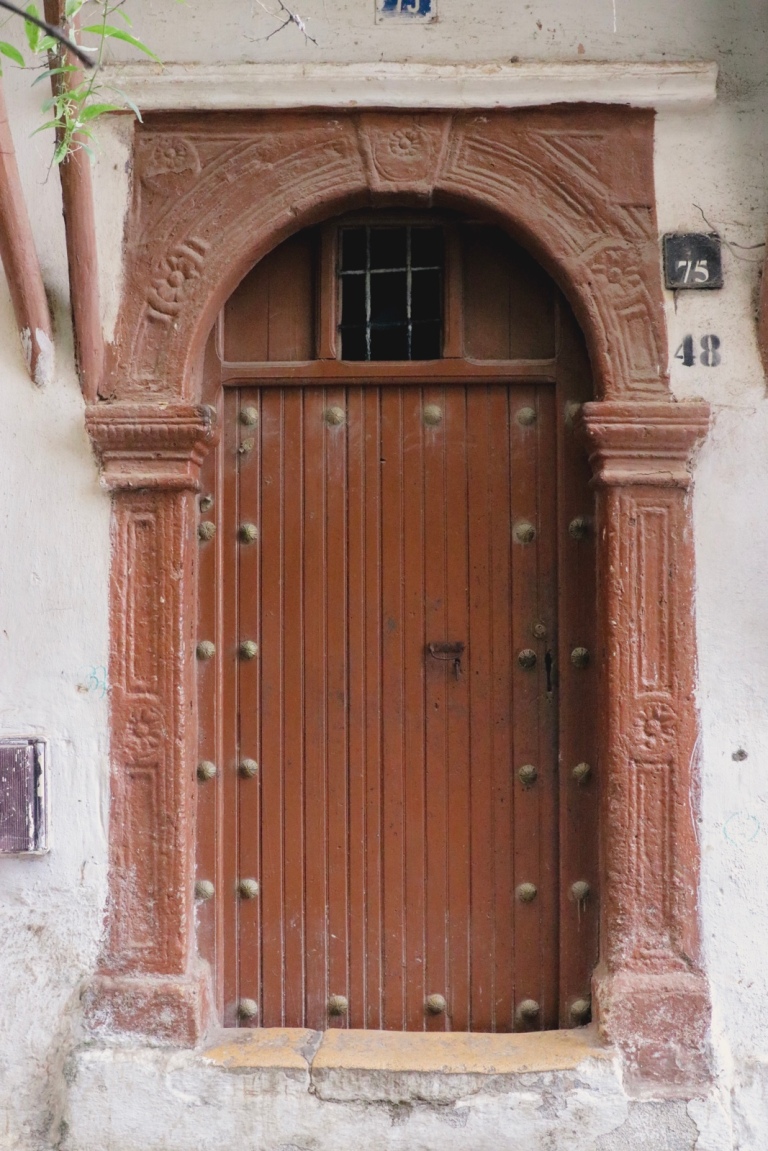 We went inside some houses – one ordinary house, which had amazing views from the rooftop. The house had 3 floors, an open courtyard section in the middle, with stairs running around the edge and up to the roof. 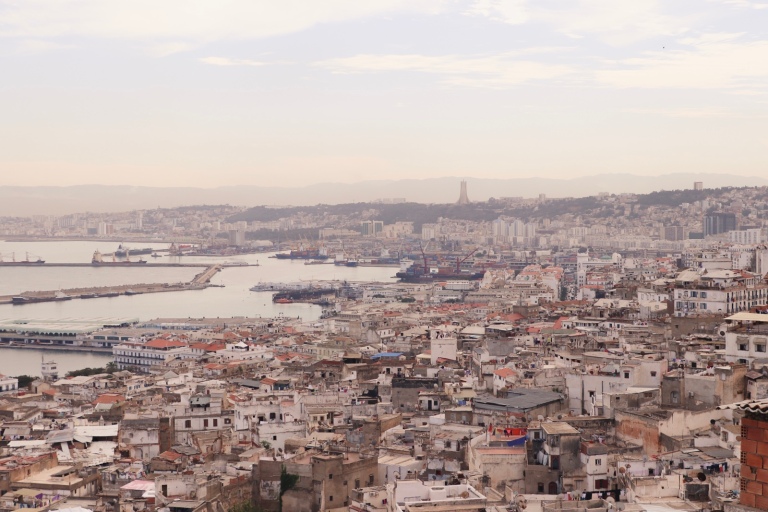 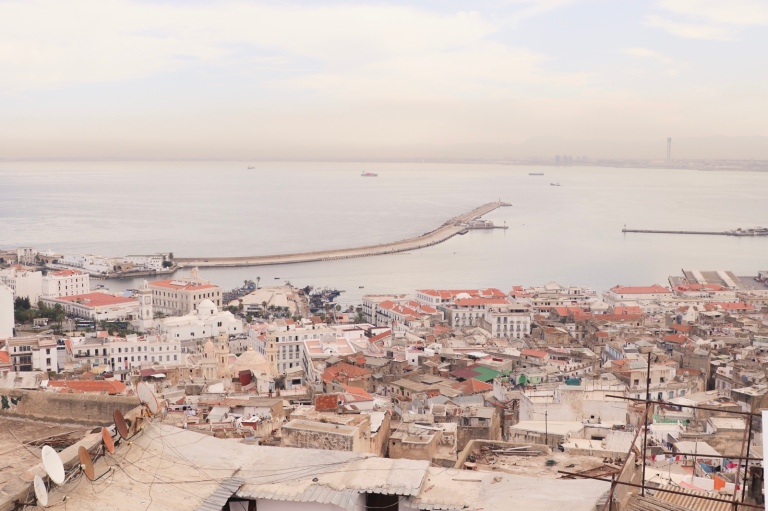 And we went inside a royal house – courtyards filled with arches, marble columns and every surface covered in fancy coloured tiles. 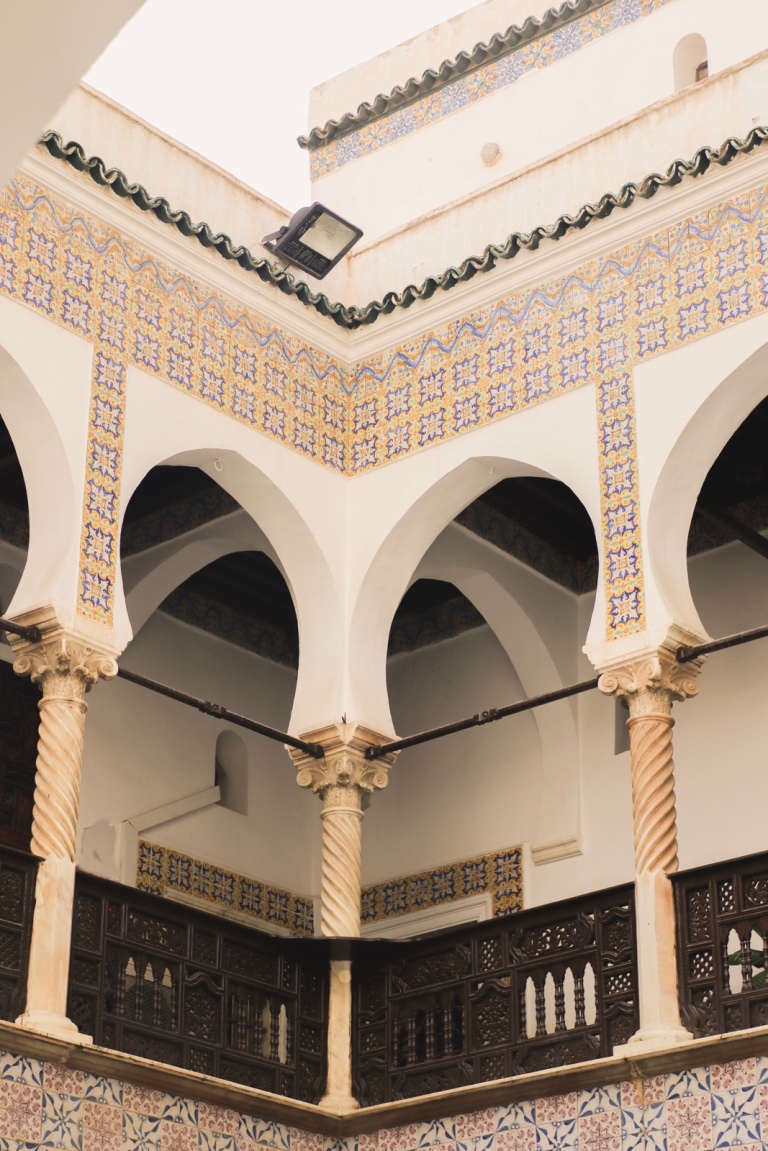 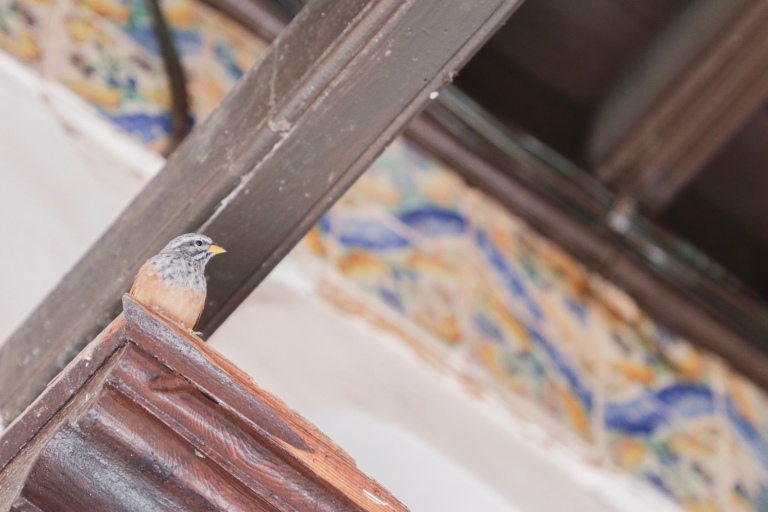 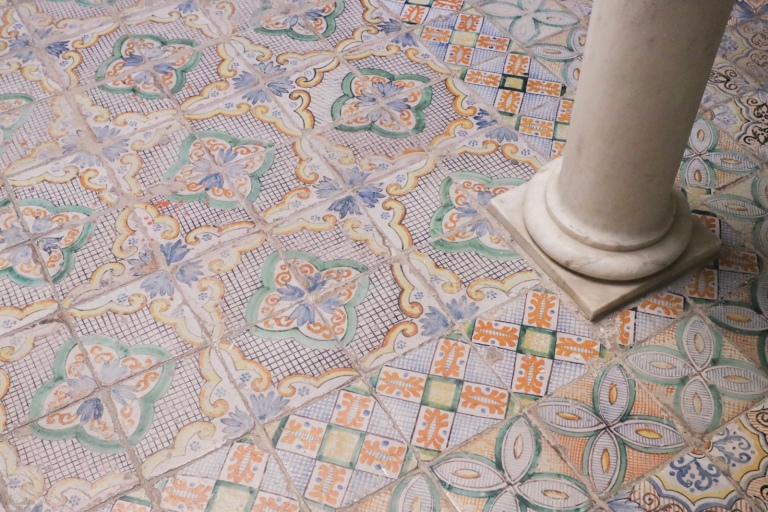 We wandered around for a while. Lots of cats. A few local people hanging around. 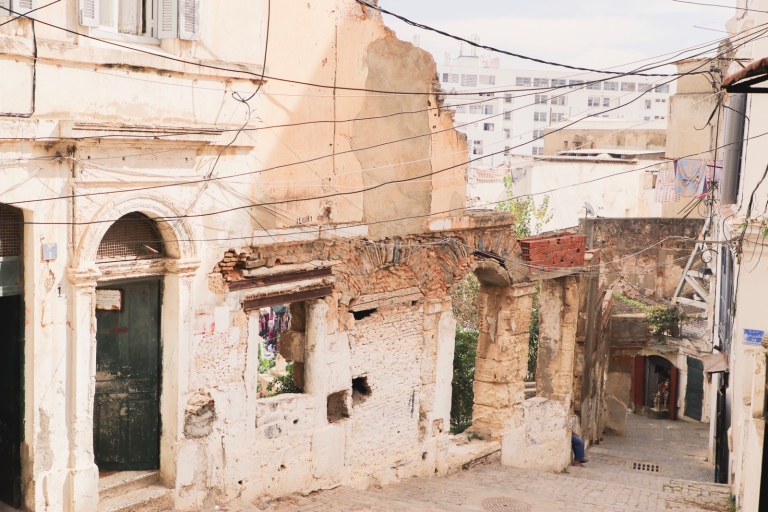 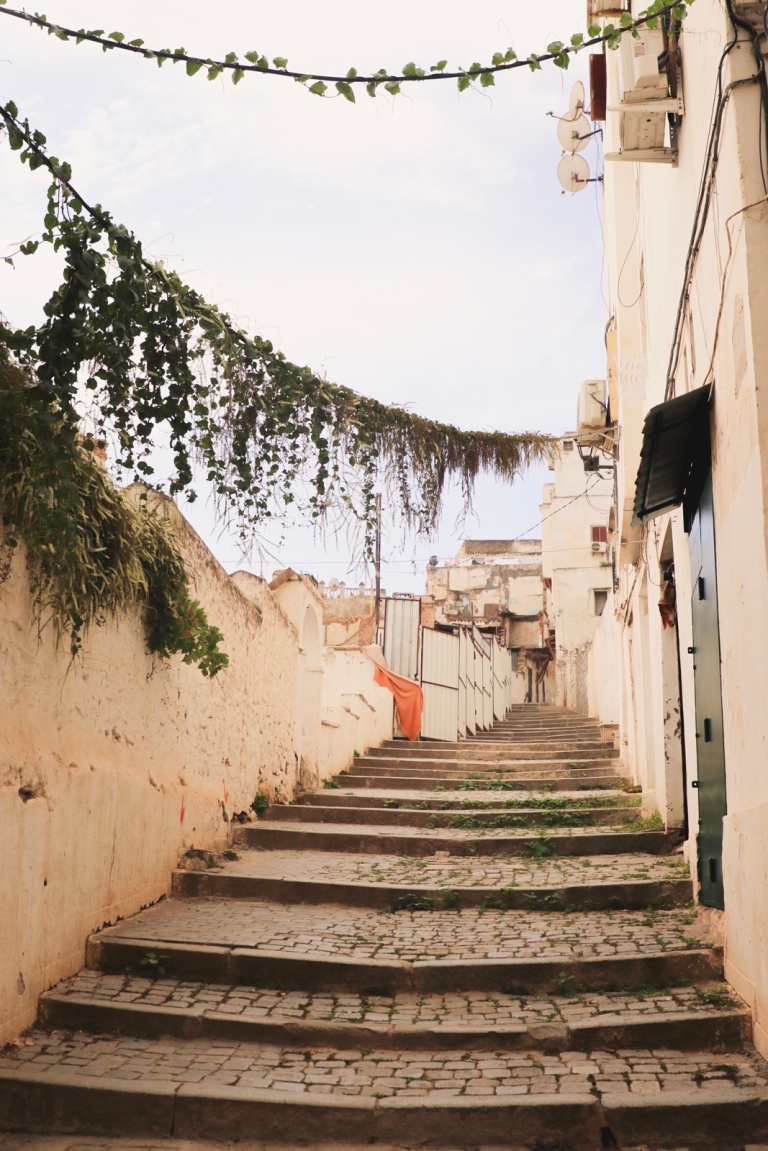 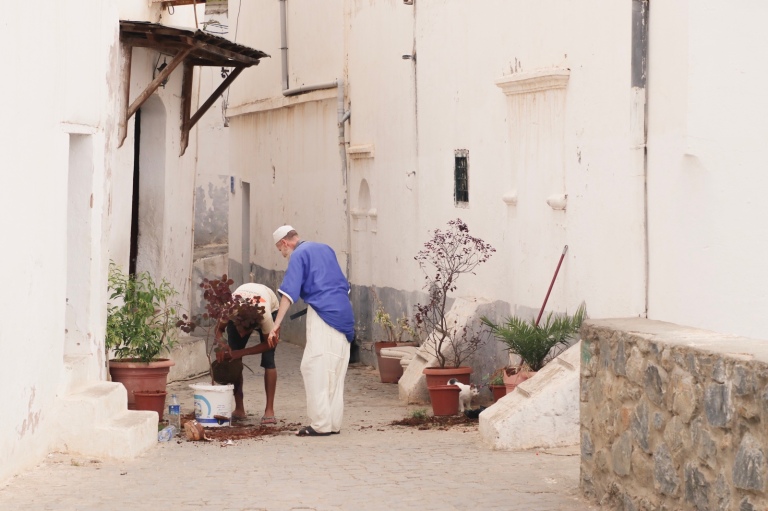 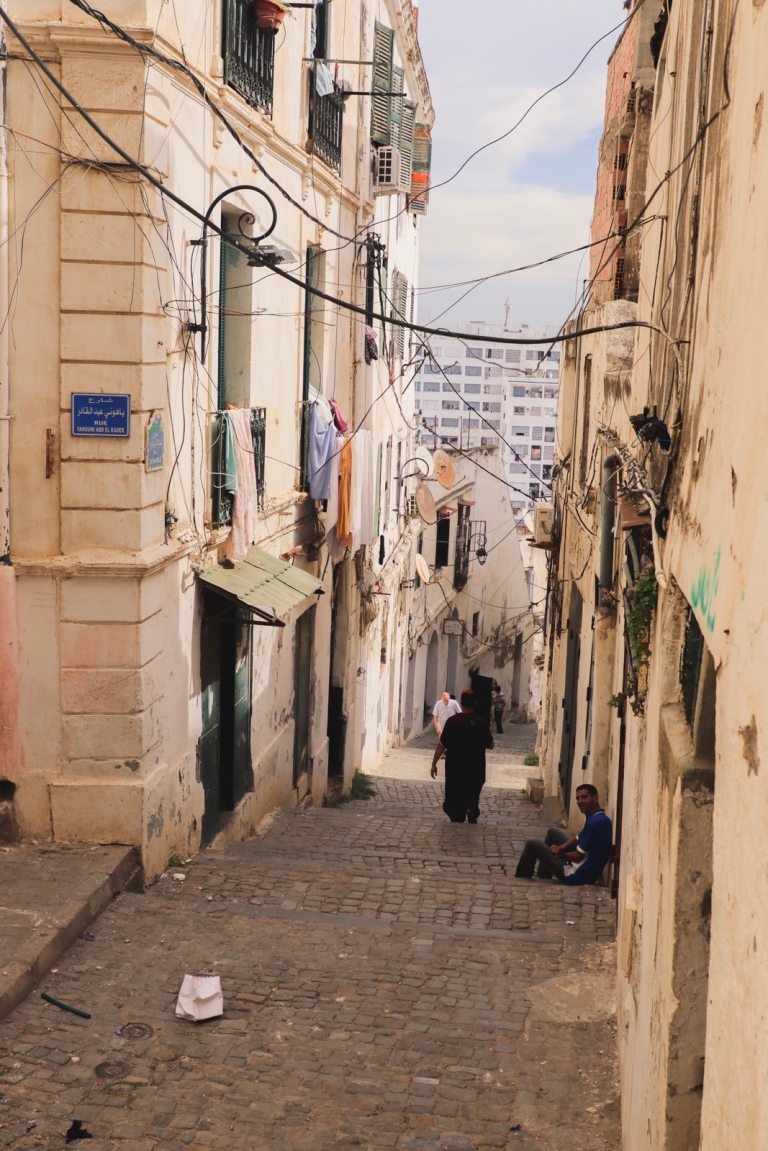 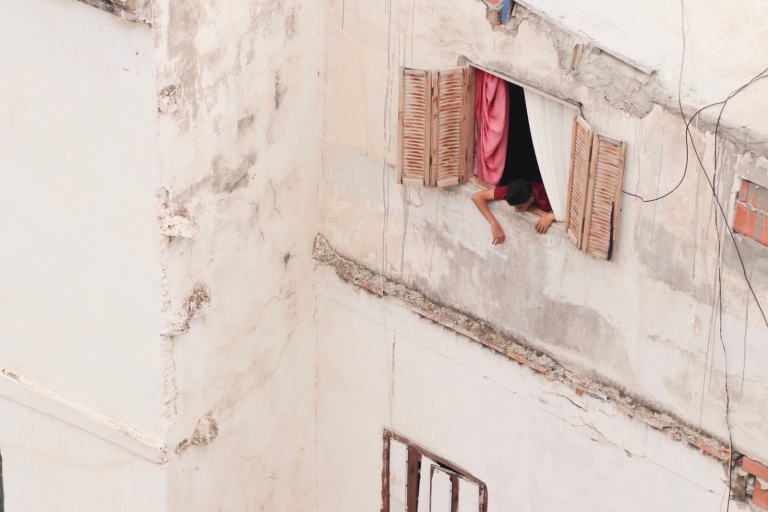 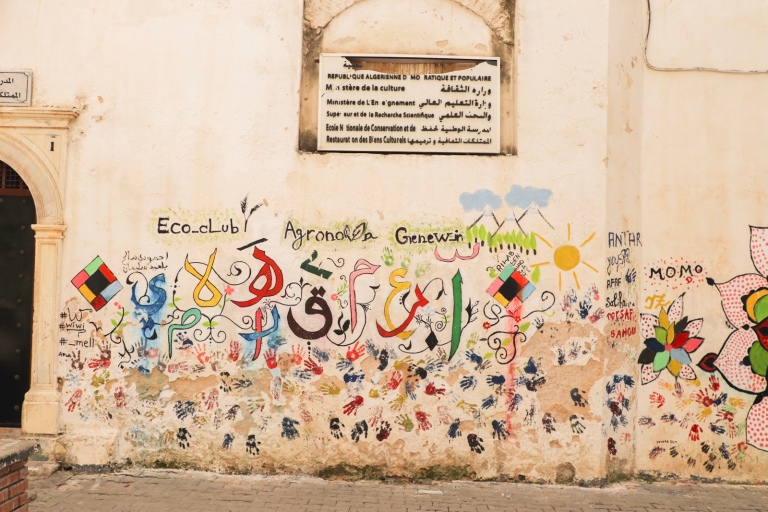 And a couple of massive local tour groups – Algerians from other cities. But no foreign tourists. 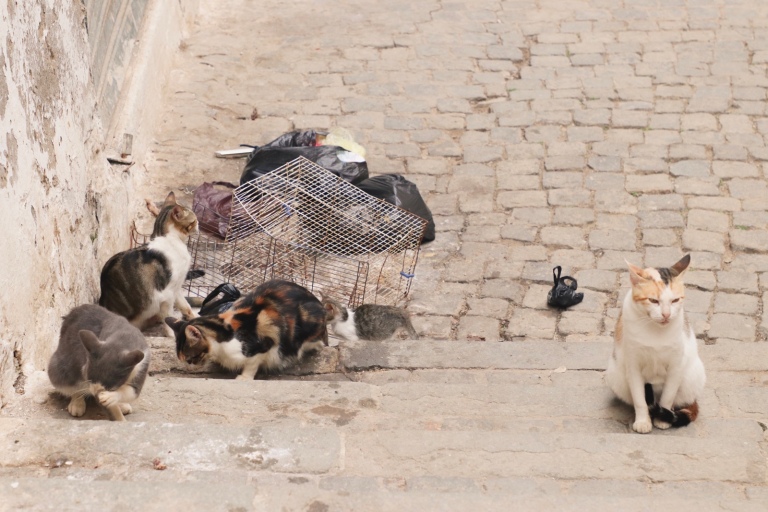 At the base of the casbah was another French district – the French destroyed the original buildings here, to build their own style. And it was busy. Two large mosques, either side of the Martyrs square. A market happening in the middle, piles and piles of dates, (and oddly) bananas and kiwis. Plus clothes of all kinds – mostly covered in lace and jewels. 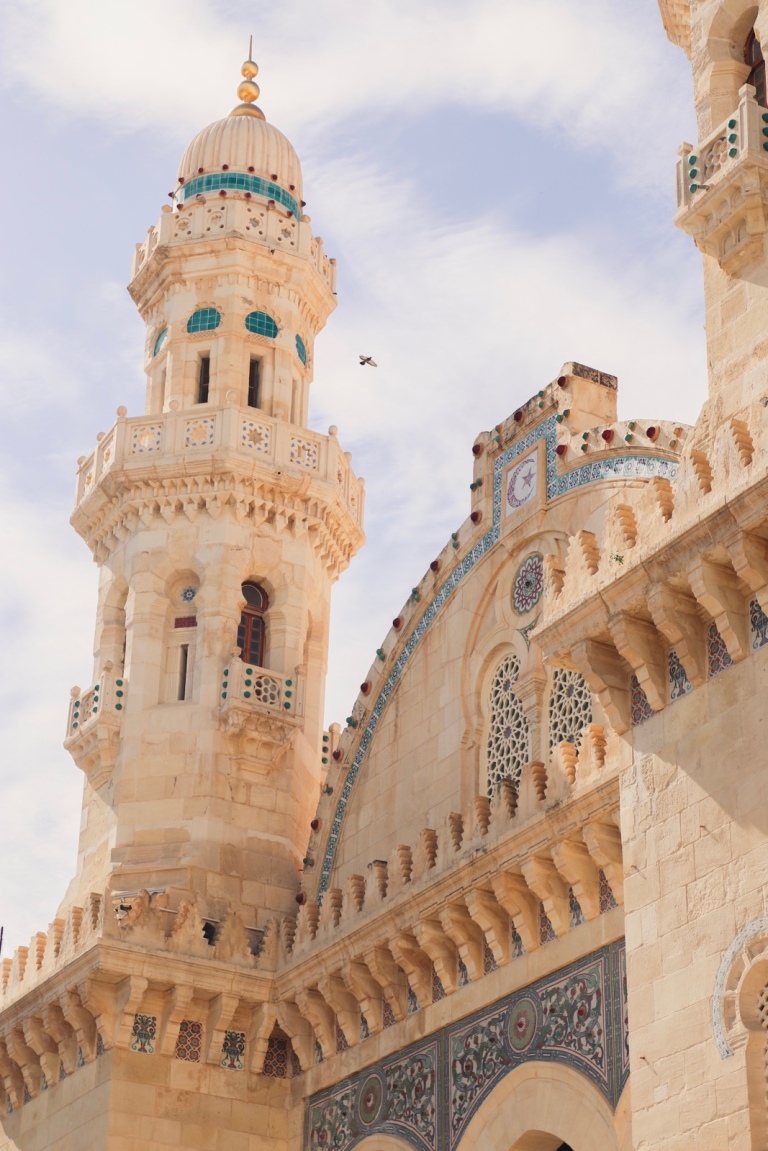 I had to put my camera away here. There were policemen around and we didn’t want to get questioned. So sadly no photos of this photogenic chaos.

We walked for a while along the seafront, through a walkway tunnel of arches. Past the national bank, and a few parks.

Money has a strange system here. There is duality:

⁃ a bank rate, which is currently 132 Algerian Dinars per 1EUR.

⁃ a black market rate, which is currently 200 Algerian Dinars per 1EUR.

The black market is technically illegal. But is carried out in plain sight, in a park by the ocean. With police men looking on.

I wanted to pay my hotel bill in cash, as it saves me a lot of money verses using my card (credit cards use the bank rate obviously).

So I asked my guide. He called a guy. And in the middle of the money changing street, we changed some money! I saw a policeman watching us, so asked if it was fine. And was advised that everyone was watching me! (White tourist sticking out!). 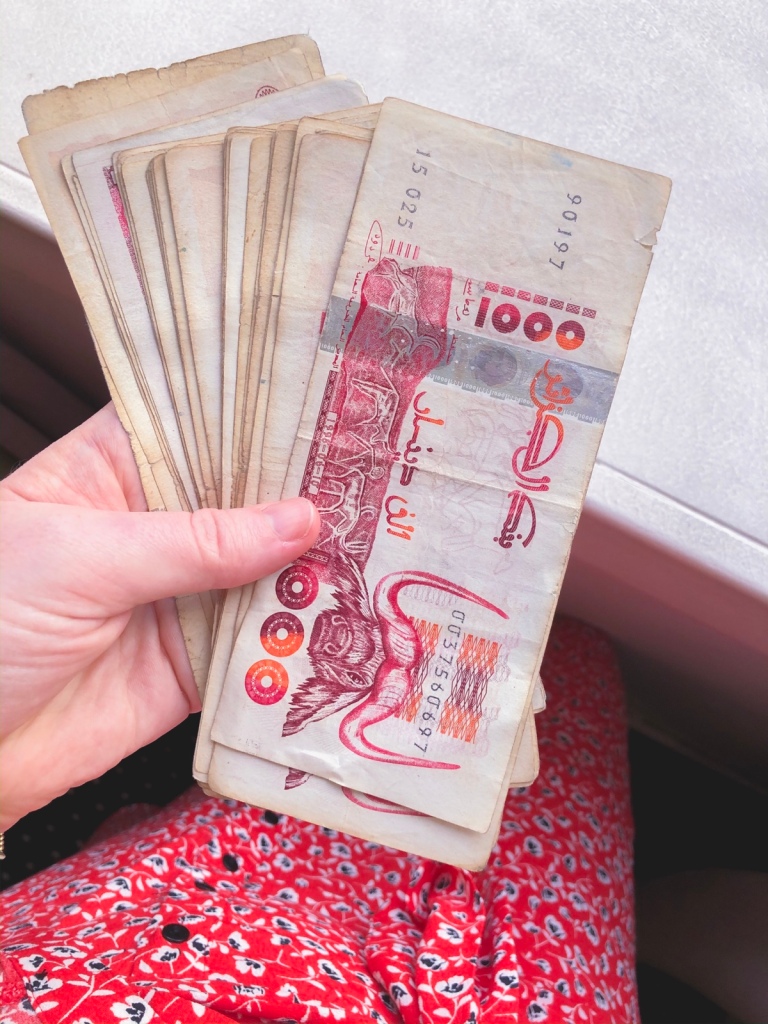 We hopped on the metro to a different neighbourhood, for lunch.

We went into a very non-descript place, which I probably wouldn’t have even noticed. The entrance was small, but opened out into what was a large Bedouin style area.

Surprisingly there is local food that is vegan. And that’s what we had! A flat bread type thing (the guy said squashed pasta) covered in tomato sauce, with chickpeas and vegetables. It was good.

Then back on the metro to the botanic gardens (right next to where I’m staying!). From here, we attempted to get the cable car up the hill. We waited for ages, it was a long queue. And the cable car itself was going to be jam packed. So we gave up and got a shared taxi up instead. The cars were just waiting on the streets for people to join in. 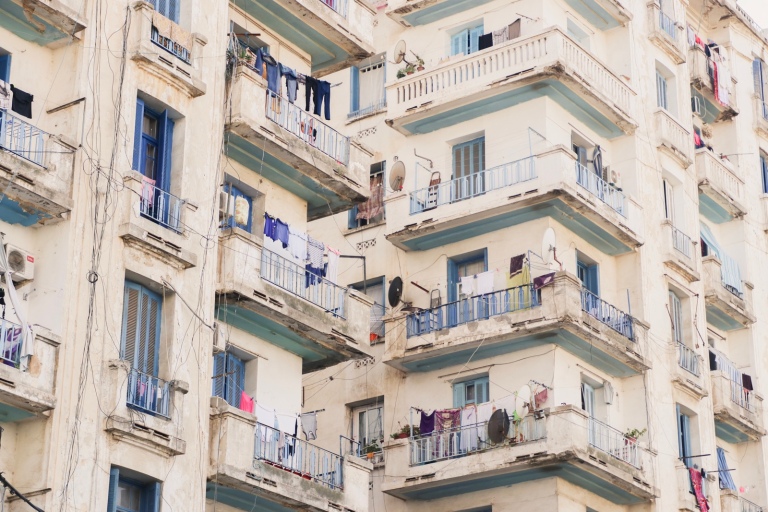 Up here is the Martyrs monument. And underneath is a museum, filled with clothes and guns, saved from the various revolutions that have happened in the city. 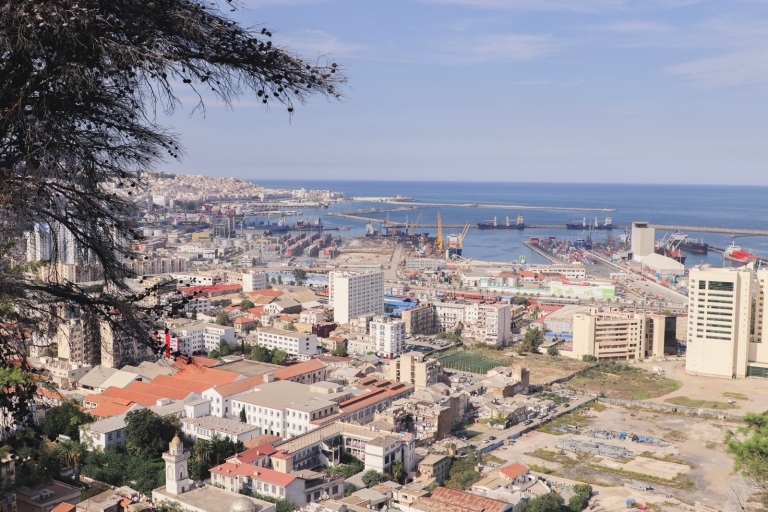 We finished about 3.30pm. And in good time for a swim in the sunshine!

I really liked the city – I had no hassle (no selfies, no shouting at me, not that much staring – none of it overly intrusive). Never felt unsafe. And all the old buildings were really pretty.

I didn’t have time to do much today, as my flight back to London was at 12.15pm.

The hotel had a free shuttle to the airport, which was good – no faffing with taxis!

And absolutely no questions when trying to leave the country. Easy.