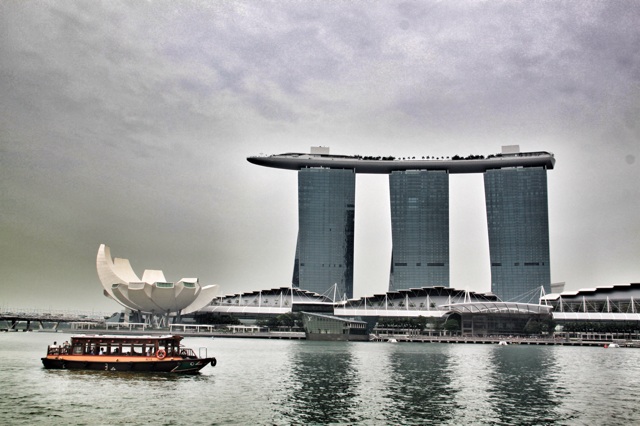 Now this is all a bit silly.

Really I want to be going to India today.

I had originally planned to go to Delhi from Colombo (Sri Lanka) and that was all booked. However, after the KL-Colombo route cancellation by Air Asia, I was left a bit stuck. So I started looking for the cheapest flights from anywhere in South East Asia to Delhi.

None were particularly cheap.

The best one I managed to find was on Malaysian Airlines from Singapore, via KL.

Funny thing being that same Malaysian Airlines flight from KL (just minus the first connection) is more expensive! How does that work?!?!

So, as I find myself in KL, I’m first flying to Singapore. To then catch a flight back to KL, just because its cheaper.

Well then, I may as well enjoy a day in Singapore.

This is my second time in Singapore. I passed through 4 years ago, on my way to Australia. I loved it back then, it was my first time in Asia. The humidity and greenery was excitingly unfamiliar, but was mixed with the familiarity of Western shopping malls and the tall buildings of the business district.

Last time I had a job, I splurged and stayed at the Raffles place. This time, I have no money, so I’m staying in a hostel in the middle of Chinatown. What a come down.

You often hear many travellers expressing their distaste at Singapore – for it being too clean and too westernised. But that’s what I love about it!

I left KL, back by myself and feeling lonely, at 11am for the hour hop down to Singapore.

Stepping off the plane was the lovely wet green smell again! But the weather is a bit miserable, drizzling.

Immigration and baggage collect was ridiculously quick. But I was pulled aside for extra bag scanning – did I look dodgy?! Well they didn’t find anything interesting (just dive kit and dirty clothes is all I have!) as I was just waved on. Some others were having bags searched.

The terminals are all connected by small sky trains. It took a whole 1 minute to move from terminal 1 to terminal 3 – where the main MRT train goes to the city. After leaving all my dive kit in left luggage, I got my train ticket – £1 for the hour trip to the centre. Easy!

The train was packed. Especially considering its a Sunday lunchtime. And EVERYONE was playing away on a smart phone. Funny! It’s quite a contrast here to the rest of South East Asia. The difference in wealth is immediately obvious. Everyone is well dressed in smart looking casual clothes and everyone is carrying an iPads and/or a fancy phone. And girls are carrying nice handbags (a selection of designer bags and a lot of longchamp about!). I feel like a right scruff with my backpacks!

I found my hostel in Chinatown pretty easily and left my bags before going back out for some lunch. I had some fried rice in the Maxwell food court just opposite. Food is quite a bit more expensive than Malaysia.

Just across the road from where I am staying is the massive Chinese style Buddha tooth relic temple. Many tiered roof layers all overlapping each other and some weird statues out the front. Inside, many sticks of incense burning away. It was pretty, but packed full of tourists!

A couple of minutes further up the road was a Hindu Sri Mariamman temple – the usual decorations around and a wall covered in cow statues! 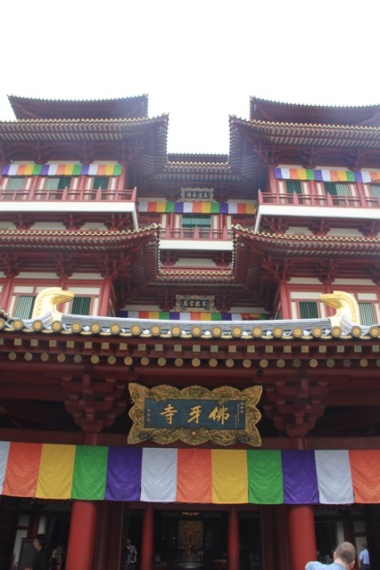 Then a further couple of minutes, a mosque. There had been a church next to the Buddhist temple. Where else do you find 4 different places of worship within a few minutes walk of each other!

Last time I was here, the marina was a large building site. This time the Marina Bay Sands building looms over the water. Its huge, the three buildings joined at the top by a long structure that has the swimming pool looking over the city. Sadly I don’t have a spare £250 hanging around in order to stay a night. Next time!

The merlion is just infront, I’m quite a fan of this statue. But last time I was here it was really quiet. Today, you cannot move for people here! It’s so busy! But really pretty.

I wandered all around the boat quay area and enjoyed the view! It is all so different from when I was here last time. So many more brand new buildings everywhere!

For dinner I really fancied having my last roti. It is one of my favourite Malay foods and they definitely sell it in Singapore too.

Clearly staying in Chinatown is a silly place to look for roti. All the restaurants and street stalls were very much Chinese food. A vast selection of pig parts, dim sum and soy jelly. Not the best place to look for muslim food!

The streets were busy, full of (mostly local) people enjoying a vast variety of dishes. It’s common in Chinese culture to order a large selection of food then all share. Some of it looked really good, but I really want some roti. So I headed to the mosque. And perfect – a roti shop opposite the mosque! They don’t call it roti here, they call it prata. And sadly they don’t do banana version. So I had the ‘normal’ ‘roti canai. Here, called plain prata. And it’s also a lot more expensive.

In semporna a roti canai would cost you 20p, but here it’s £1! But it was still just as good! I wonder if they sell this in India? It is Indian Malay food after all. So maybe I didn’t need to wander in search of my final roti?! I will find out soon!

The view from the hostel balcony was nice – during the day time the surrounding towering buildings are all dotted around. But at night time, they are all lit up and the streets full of red Chinese lanterns! 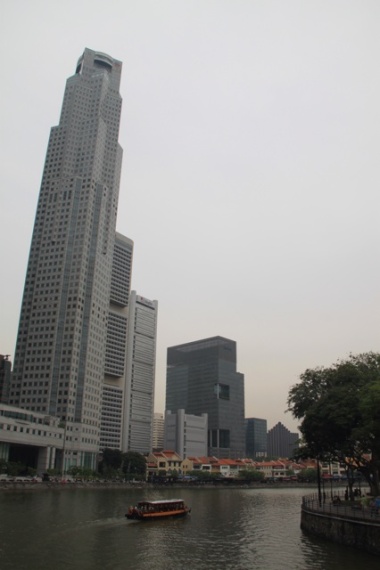