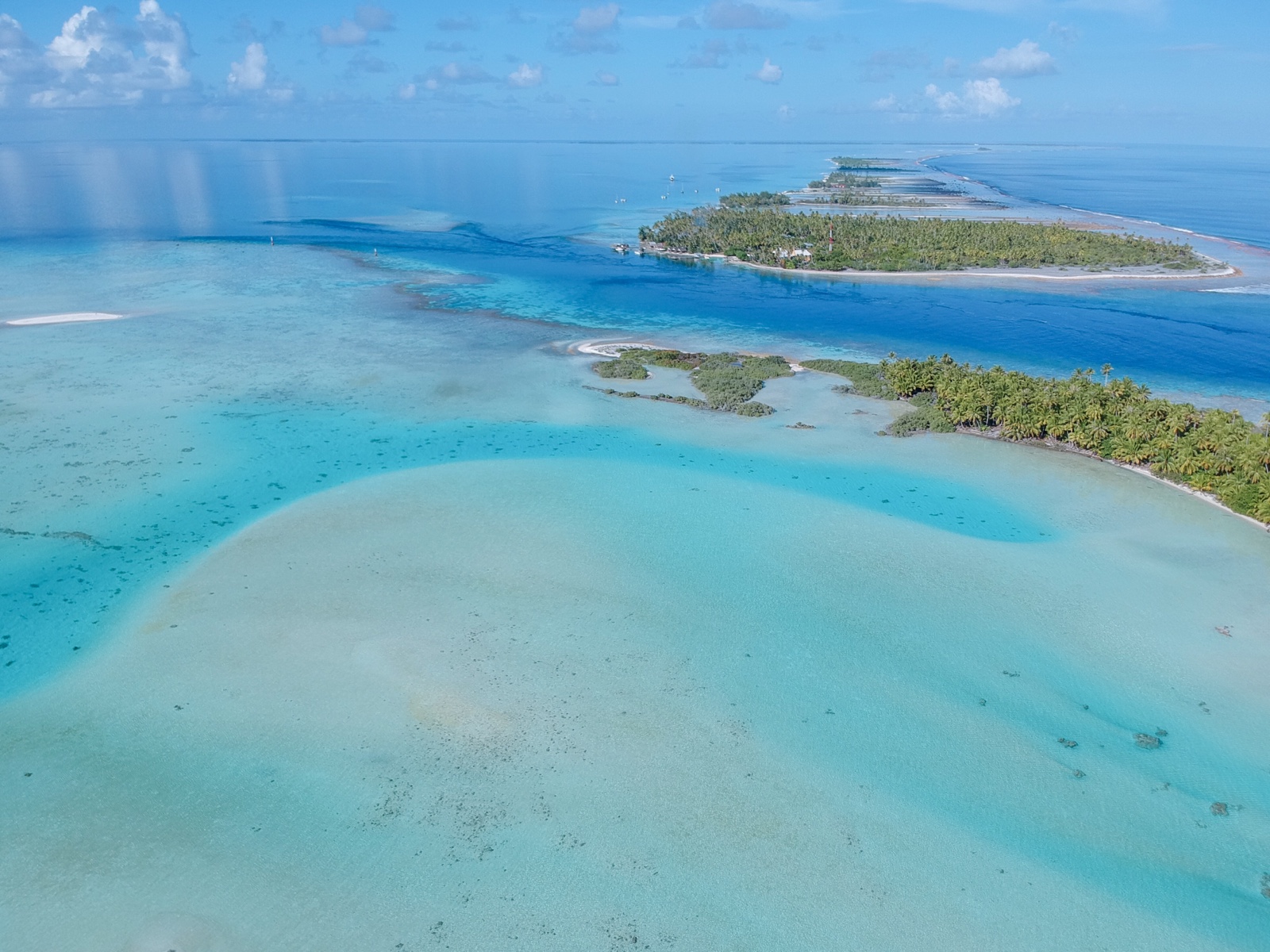 Another day, another atoll. And the final atoll of the trip.

Fakarava atoll is the second largest atoll in the tuomotus (after Rangiroa) and UNESCO have designated the area a biosphere reserve.

There are two passes on this atoll. One at the south. And one at the north. We’ll head back up north tomorrow – 60km away.

We woke up this morning next to a village. Civilisation again! A village comprised of a handful of people…!

The main village at the southern end of the atoll is Tetamanu and has the oldest church in the Tuamotus. Now, there isn’t much village left – just a couple of guest houses.

In this southern pass there are estimated to be around 700 grey reef sharks living here.

The first dive was an incoming current. And hundreds of sharks. All hanging out at different places. Some at the edge of the channel. Others all together further inside. All heading the same direction. Just hanging out. I’ve never seen so many sharks in one place. So cool. 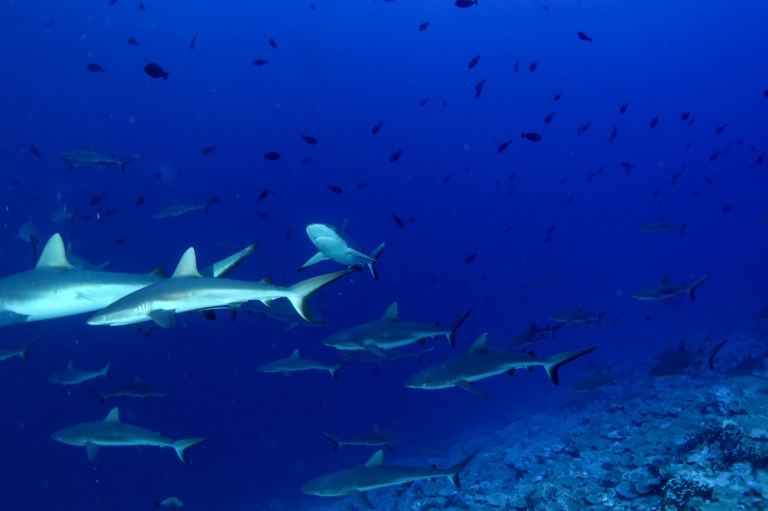 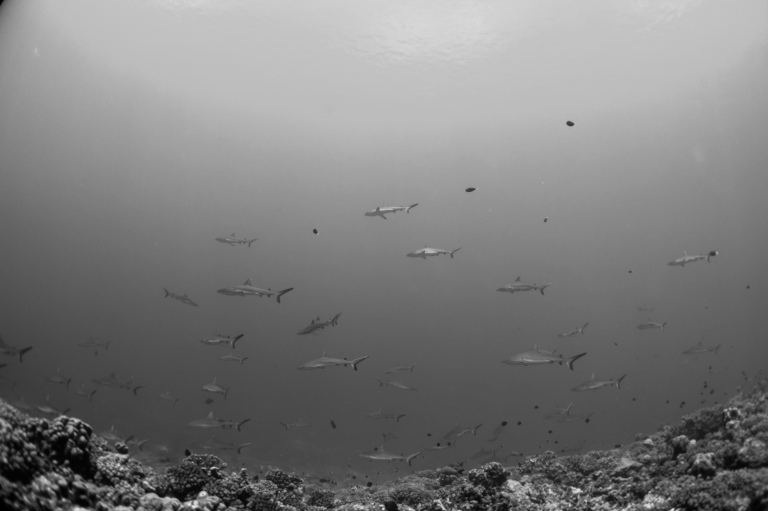 The second dive was similar – but on a slightly different part of the channel. Sharks everywhere. 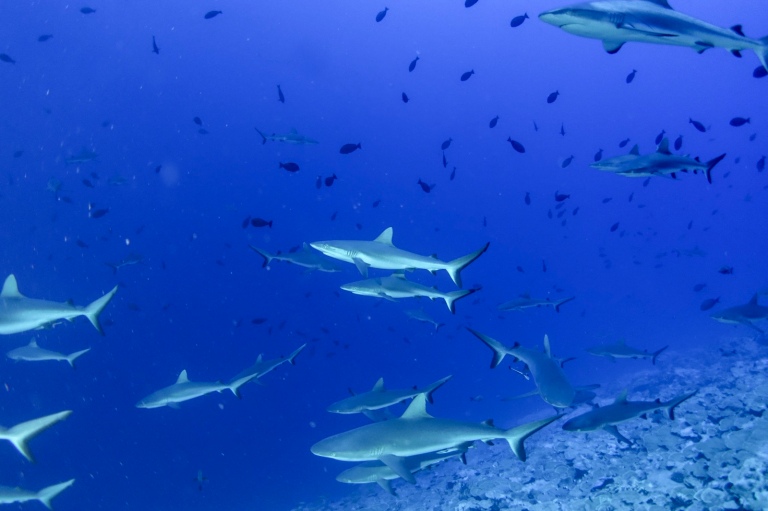 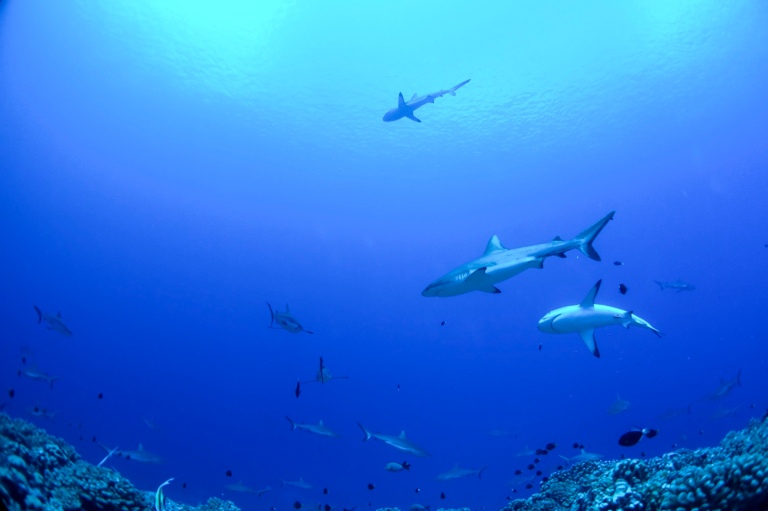 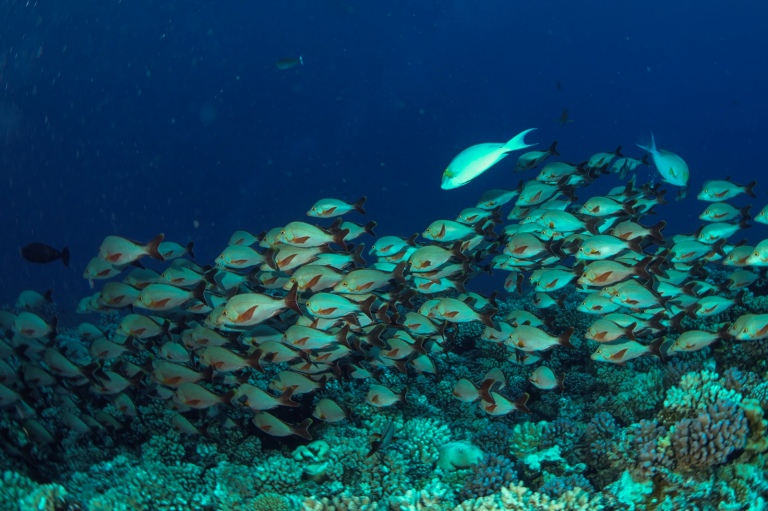 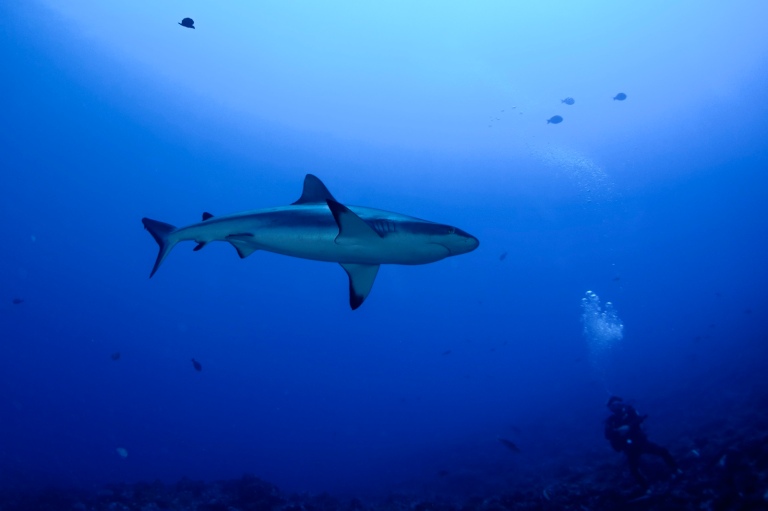 All day, around the boat more and more black tip reef sharks had been gathering to swim in the water next to us. By lunch time there were around 25 of them, just milling around.

After lunch we headed off to a deserted motu. Just to hang out. And swim in the shallow lagoon. It was so beautiful.

One end of the sand has recently become a bird nest – many sitting on eggs.

We were going for a night dive this evening. With the sharks. In the channel.

We were only in relatively shallow water, around 12m. With sharks zooming around everywhere – grey reefs and white tips. Only once did I see them going crazy – one must have got a fish and there were around 30 sharks all scrambling over each other, fighting for the food heading up in the water column. 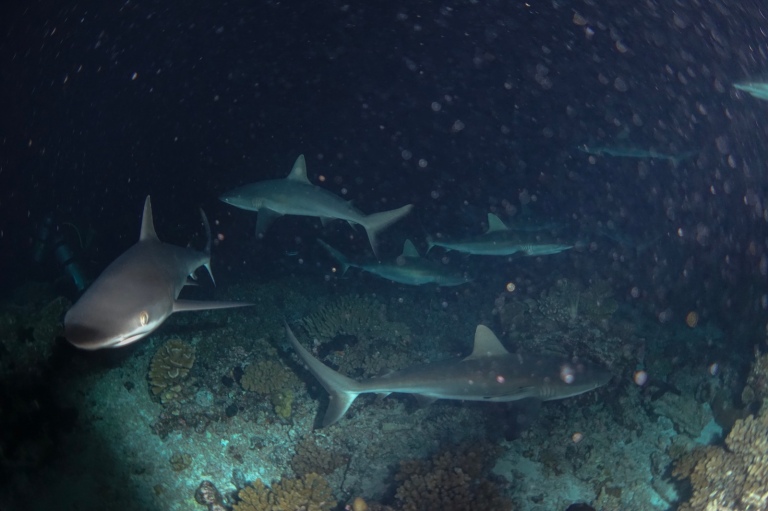 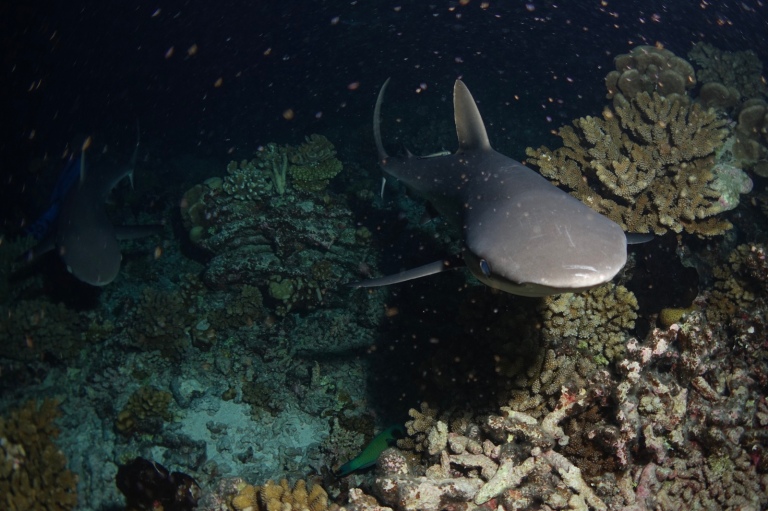 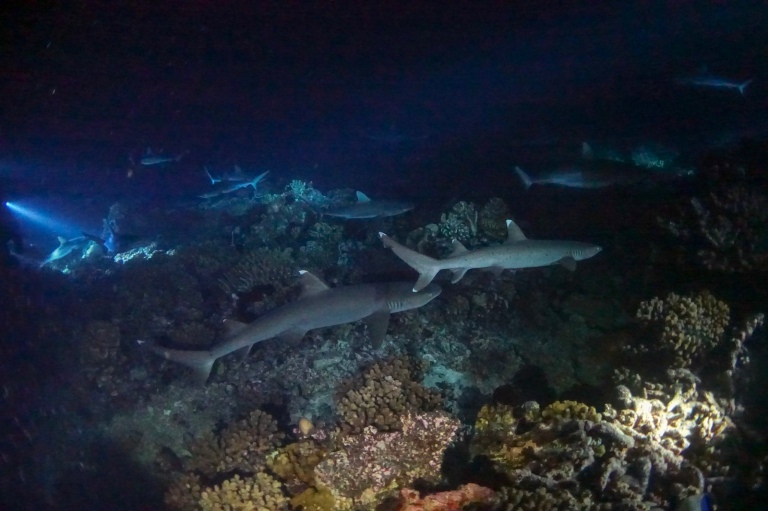 We were diving just after sunset, so whilst active, they weren’t yet in full hunting mode. They were getting more and more crazy as it became later.

For dinner we headed to land. To a pizza restaurant that a man had built out of drift food on a motu. The food was very island style…! At least they tried to make a vegan pizza. 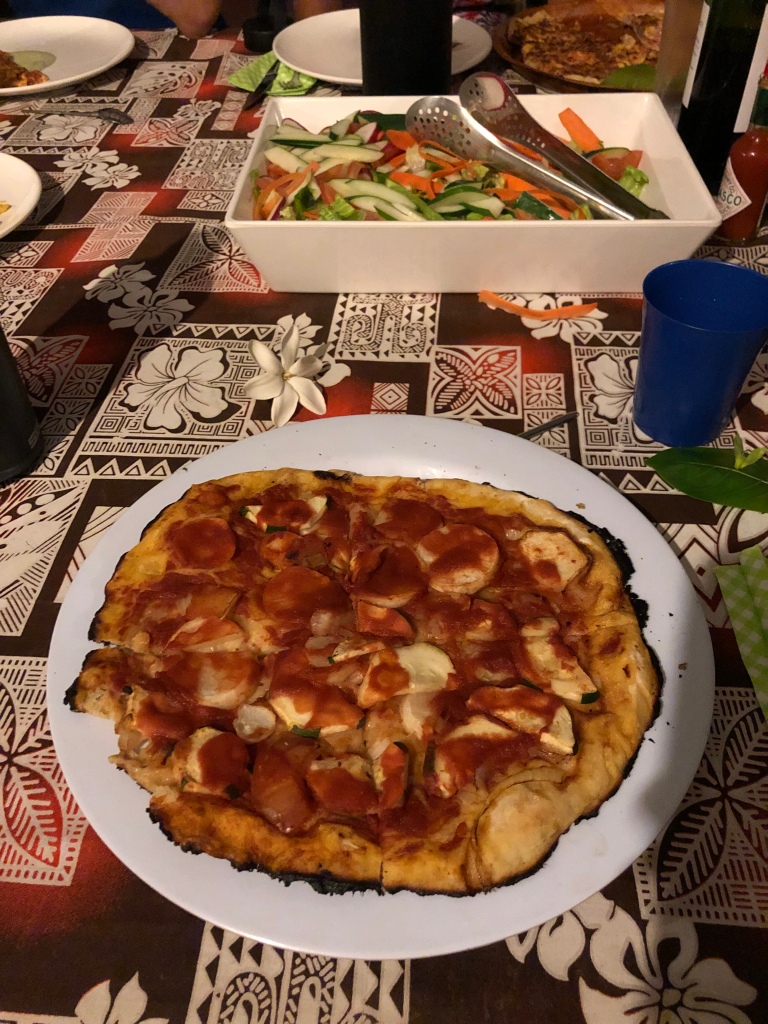 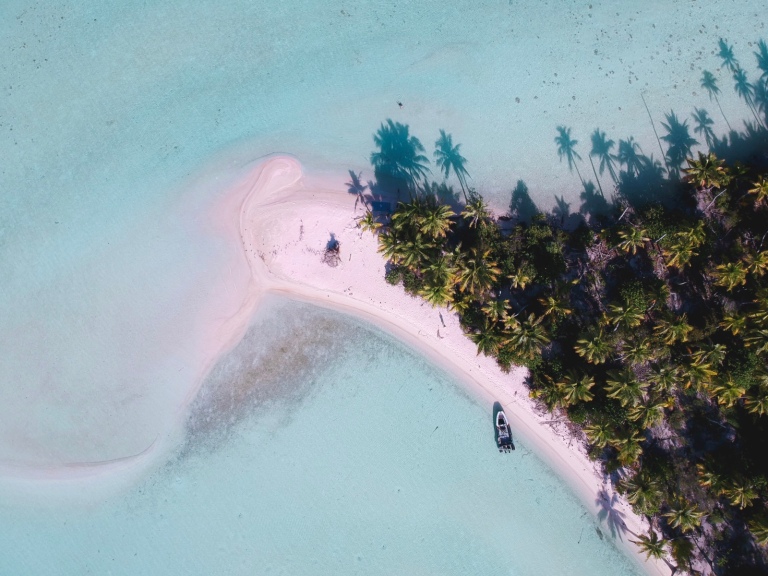